What defines me? Where do I belong? Who am I? Posing these questions helps us define our concept of self, comprising various overlapping identities. These questions morph our sense of self by challenging fundamental paradigms of identity or identities that we create for ourselves. Such identities not only define us but also define our relationships with others. In the mosaic of the identities we build for ourselves, the point of truth – the individual projecting these different versions of self – has no boundaries and often lies somewhere between the lines. The current issue of PIX focuses on the contradictory compulsions of such identities within the unique socio-political context of Iran.

A camera captures the likeness of the object it shoots. But a photograph can go one step further, capturing the thought or intention of the photographer behind the camera. Photographers at times use their imagination as a defense mechanism, borrowing props from real life to describe fictitious narratives; perhaps these props act as metaphors that endorse the photographer’s identities. For example in Memories of the Interior, Arash Fesharaki’s visualization of places, which remain incomplete without a suitable inhabitant – imagined or remembered – offers us a view that we might otherwise miss.

But the reverse is also true –in the works of Babak Kazemi, we are able to visually relive the legend of Shirin and Farhad, a story of unrequited love. Through such photographs, one moves into an alternative existence, a world shaped by constructed realities, which at times are more symbolic than reality itself, perhaps particularly when looking at the legend as a metaphor for a specifically Iranian context. As the famous 20th century English photographer Tony Ray-Jones observed, – “Photography can be a mirror and reflect life as it is, but I also think that perhaps it is possible to walk like Alice, through a looking-glass, and find another kind of world with the camera.”

Such constructed realities are important as they convey the complexities of trying situations without literally alluding to them; Iran is a land of inexplicable cultural beauty and rich history, but it is also a land of cultural metamorphosis. Reza Nadji’s works is a subtle take on this subject – a cityscape devoid of the people who inhabit it, and a deep sense of conservatism cloaked in modernity. On similar lines, Azadeh Akhlaghi’s work, featured in the editorial section, depicts Iran’s tumultuous and complex history. Akhlaghi’s profound By an Eye-Witness series introduces us to the precarious ties existing between the political scenarios and the people of Iran.

Ali Nadjian’s body of work titled, We Live in a Paradoxical Society, implies a sense of duality – in a seemingly mundane documentation of the daily lives of average Iranians there exists a sense of discomfort. Nikoo Tarkhani’s Me-ror offers a direct testimony to the eternal flow of life, space and time through the merging of her family portraits. It is an affirmation of an often forgotten inevitability – of how deeply couched our identities are with the past as well as with shaping the future. In a country like Iran that has a rich tapestry of culture but also a marked conflict with itself, the interaction of different identities exists between the lines of absolute categorization, and makes these art works, a poignant marker of a moment of transition.

From the Tehran Remixed – Party series by Amirali Ghasemi, Untitled, 2006 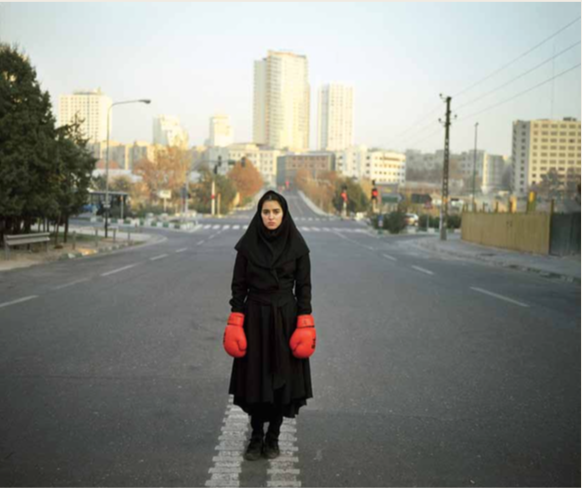 From the series Listen by Newsha Tavakolian, Portrait of Sahar Lotfi, Tehran, 2011