The Price of Jade

“Gold is valuable, but jade is priceless.” So goes a Chinese saying…

Myanmar’s thus far secret and illegal jade mines lie in Hpakant, a town located in the northernmost part of the country. Hpakant generates the world’s highest quality of jade, prized for millennia by the Chinese for its beauty and symbolism – which ironically denotes wisdom and benevolence.

Thousands of young men arrive in Hpakant every day from all over the country, hoping for a windfall, a chance discovery leading to immediate fortune. Despite the dangers inherent in illegal extraction, a community of workers swarms across mountains of mining waste dumped by government-licensed companies. It is a perilous job, especially when the banks and slag-heaps are destabilized by monsoon rains, causing landslides. A massive one in November 2015 at a waste dumping site reportedly killed 114 people. Still, lumps of the precious stone amount to a godsend for small-time prospectors –a fist- sized piece of jade can be worth a million dollars. But these rare finds pale in comparison to the staggering wealth extracted by the multi-billion dollar industry, which is largely run by Myanmar’s military and rich tycoons/industrialists.

The biggest firms are linked to China as most of the jade is exported illegally. A recent report by the London-based NGO, Global Witness, puts the worth of Myanmar’s jade industry at $31 billion – nearly half of the national GDP (and over 46 times the nation’s spending on healthcare). The effect is imaginably, a societal one.

Drug use is almost intrinsic to jade mining. So-called “shooting galleries” operate openly in Hpakant where workers often exchange chips of jade for hits of heroin.

All images from the series The Price of Jade, 2014-15 Digital 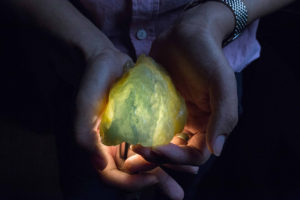 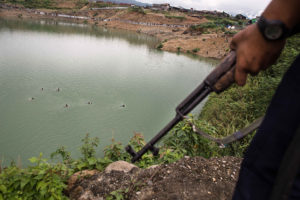 [SeriesTitle: The Price Of Jade] A group of illegal jade miners swim across the water as they try to escape an arrest by the police and the military forces, in a jade mining site, Hpakant, Kachin State, Myanmar, July 18, 2014. Military officials say the miners are illegal and endangering a school located above. But the miners say they are being extorted for bribe money, which could be as much as 50,000 kyats per head. A 1994 ceasefire between the Kachin Independence Army and Burmese military brought most of the jade land back under government control. Since then, large-scale extraction has began, with hundreds of backhoes, earthmovers and trucks working around the clock, leaving the traditional freelance prospectors to become illegal miners by the law. 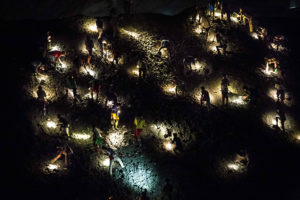 [SeriesTitle: The Price Of Jade] Miners with torchlights on their heads go over a pile of company mining waste, looking for jade, Hpakant, Kachin State, Myanmar, April 25, 2015. Some miners work by day while others work by night but the mines never get a rest around clock. 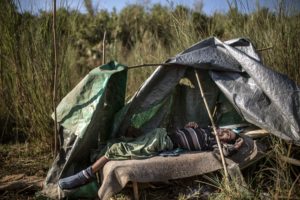 [SeriesTitle: The Price Of Jade] A heroin-addicted jade miner lies dead inside his makeshift tent which is located close to a “shooting gallery” near a jade mine in Hpakant, Kachin State, Myanmar, November 29, 2015. According to local community leaders, the drug-dealers around the jade mines and the villages nearby have been given the opportunity to grow, blind-eyed by local authorities who regularly gets handsome bribes from the drug-dealers. 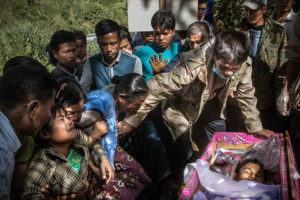 [SeriesTitle: The Price Of Jade] The funeral of 24-year-old Ko San Tin, a freelance jade miner who died being run over by a jade mining company dump truck, Hpakant, Kachin State, Myanmar, November 28, 2015. The next day, angry locals blocked the village road stopping the company trucks to pass through. The company quickly made an agreement with Ko San Tin’s family for a compensation and closed the case. Ko San Tin who has just been in Hpakant for five months, left a 2-year-old, a wife and parents who he was supporting for.