The idea for creating this series was born after reading Rabindranath Tagore’s Bolai. I found inspiration in this story about a little boy and his attachment towards nature. Although the text became a starting point for my reflections, I did not simply want to illustrate Tagore’s story visually. My story is about the inherent desire in every person to break away from inhibitions and fly off to a distant unknown, in search of his true identity.

I decided to work with photomontages for this body of work. The content to create the montages was drawn from popular media and open sources on the Internet. Sometimes, I also collected cut-outs from magazines, old postcards, posters or even my own photographs —anything which could work in piecing together the story.

Q. How has educationlmentoring changed your practice over time? What were your expectations of the course or workshop you were involved with?

As my student life at the National Institute of Design almost comes to the end of its three-year span, I have started to engage with visual language as something to be ‘read’, rather than to be seen. I had always been more inclined towards visually representing my thoughts, as opposed to verbal expression. It has also motivated me to think about my work critically and ask informed questions about my own practice —what is my intent of working on a particular body of work, how is the work relevant in the present day, what is this work meant to address? I had joined the Masters’ programme in Photography Design with dreams of becoming a successful travel photographer. My initial expectations from the course had been to equip me with technical precision, an improved sense of aesthetics and consequently, a ‘decent’ job. As I became more immersed in the academic curriculum, there was a radical shift in my thought process. The urge to find meaning within my work overpowered the need to achieve targets and deliver tangible results.

My process of working too, changed as much as my thought process did, during my time in the institute. In fact, many a time the process itself started becoming more important than the outcome, as I invested in sketching, shooting or printing. Practices such as maintaining a journal, creating storyboards, working on mock-up displays and dummy books were things I wasn’t previously aware of, but proved to be crucial steps in moulding a project.

As the programme progressed, teaching me things beyond the gamut of photography —such as typography, animation, graphic design and videography, I felt a personal need to start experimenting with photography. The urge to go out and make images suddenly took a backseat. It was at this stage that I started toying around with photographs to create montages or collages, writing text on prints, print-making, exploring different materials and making graphic novels.

Our realities are often governed by images. A photograph is seen as evidence to something which has occurred, a witness in time. However, in the digital age, the perception that the camera never lies has flipped into the camera always lies. There is a lot of mistrust in images now and if anything appears peculiar within the photograph, we assume it to be digitally manipulated, photo-shopped or fake. These perceptions about photography intrigued me and confused me.

The biggest challenge in this digital era is that everyone has access to a camera, and making an image has become easier than ever. We are producing hundreds of thousands of images every day, adding to the already vast ocean of visual information bombarding the internet. Photography needs to move beyond simply being the visual evidence for something. This anxiety has led me to constantly search for a new vocabulary, which will make my practice meaningful.

Q. How do you think photography will change in the future and what will be the role of the University/ Festival/Workshop?

As artists around the world have begun to experiment with photography and challenge norms, the medium has emerged as an interdisciplinary form of expression, encompassing allied media such as video, graphic design, and sound. I see such experimental work gaining more prominence in the future. I also think that photography will gradually move out of gallery spaces and the pages of expensive photobooks more and more, and continue to become more democratised. While universities and workshops help individuals to find purpose within their work and approach their subjects more critically, festivals allow one to look at contemporary practices, and are valuable learning experiences, especially for students like me. It gives us an opportunity to become aware of artists, provides an environment for interaction and discourse, and helps us to understand the present domain of photography.

Given the way photography is progressing, it is important for emerging photographers to analyse their own work critically. In this regard, photography courses should educate one about the history of the medium itself. Courses should also encourage students to discuss the work of not just photographers, but of other artists as well. In fact, I cannot emphasise enough the need to read and to watch films in order to add substance to one’s work. It is also imperative to realise that work cannot be created in a vacuum – hence one must be aware of the geographical, social and political atmosphere within which the work is being created.

There are several other classroom activities I have greatly benefited from —such as working in a team to produce the department’s biannual magazine called 12 or the film appreciation course that was conducted. It has also helped to diversify my reading. I was introduced to the works of writers who have written about the medium —such as Dyer, Sontag and Berger at the institute. But alongside I also started reading the works of Franz Kafka, Albert Camus, Neil Gaiman and Hermann Hesse, and also started looking at the works of artists closer to home such as Bani Abidi, Gauri Gill, Nalini Malani and Shilpa Gupta.

All images from the series AIN Gandinagar, Gujarat, April – May 2017 Photomontage 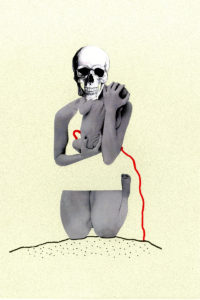 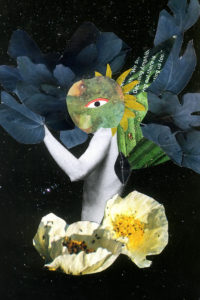 LEFT: She waited and waited And cried Everyday. Seasons came and left. But Ain never returned. With every tear drop a little bit of her faded away. 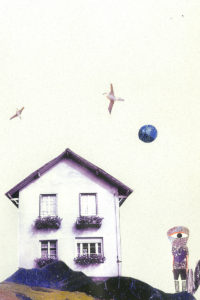 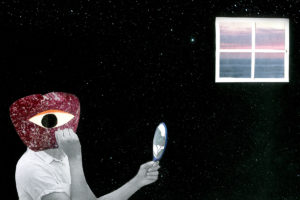 RIGHT: One day he looked into the mirror. He could only see leaves where his reflection was supposed to be. 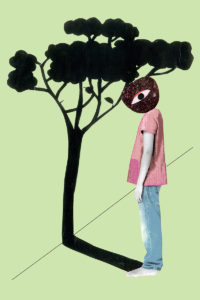 LEFT: And this is when he realized who he really was. RIGHT: In the dead of the night when everyone was asleep, Ain left. The next morning the woman found Ain’s feet on the floor of his room. He was nowhere to be found. 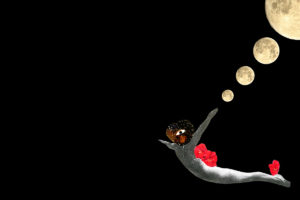 LEFT: He was at peace but he wanted to know more. He wanted to discover the secrets of the universe. RIGHT: The woman found out that Ain had started to grow leaves. Ashamed to look at him she turned her face away. What would the neighbours say? She chopped off his branches and cut off all his leaves. 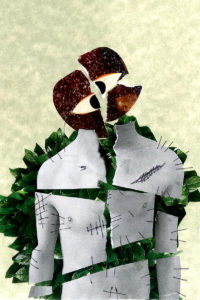 LEFT: A boy was born to a woman, but he was not born of her. He was made up of stardust. She named him Ain.