One of the challenges in the arts today is that there is a loss of critical mass as far as writing on photography and the archive is concerned. The economics of it seems to suggest that in a country like India, where we do not have institutional support for printing, pubhshing, dissemination and reprinting, we have to pass responsibility onto private hands and free access modes such as the Internet. The second is that we don’t have any kind of intellectual or conceptual approach to archival material that has been left behind. If we look at Indological studies, let’s say from the 19th century onwards, to whom do they belong and where are they going to finally rest?

The third is that the notion of the library catalogue is disappearing. When we were young, we looked very rigorously at catalogues. Now we Google search and get 1,25,000 results and the reader is not perhaps in the right structural ladder for accessing information. So the need to provide a filter whereby you perform an editorial function of bringing in material together is what Critical Collective (CC) is doing. And, fourthly to be able to structure the disciplines in a way which will allow inter-textual reading. I (the reader) should be able to move from a photograph of Ram Singh H to textiles or Vaishnavism, because they were interrelated.

The idea of CC therefore, of bringing in the newsletter and archival material was that once you create an archive, whatever you put in a newsletter is stacked into the archive and that continues. What I discovered was that modern, contemporary and lens-based media fields were the most neglected areas in this respect.

I want to make the case that photography is the most ‘modern’ medium in the sub-continent. When we talk about intertextuality, it (photography) slipped between media very quickly and became a third or fourth kind of subject. If you compare Indian photography in the 185os, to the work produced in Europe, you already have a different model with a varied social and political context. Now, why was this ignored even as late as the 1 950s, when the Baroda School’ was set up? Something like photography was not introduced in the basic curriculum. I too have come to photography through curating simply by realising that the archive is so generously alive and, in a way malleable, and it has a certain imminence because there is great potential of reading and theorising in photography.

I think that the great theoretical writing around photography from the subcontinent—not essentially of the subcontinent, because it presented itself as a theatrical medium of visual presentation—has not even started. For instance, in Puddukotai or Jalandhar or Simla —across the country, there were Photography Societies. What were they producing? The idea of reading across geographies for photography therefore is much easier than reading across geographies of sculpture, for instance.

…I think there are different curatorial models, and I tend to think like a critic-curator because the conceptual, the written and the theoretical to me are connected. With regard to Middle Age Spread,’ that was the history of Shambhu Nath and to a certain degree, a political response to the making of the nation, but did we see here an emotional curve? Did we see here a state of ‘affect’ in the photographs? This was very important for me. I see a photograph as a highly affecting instrument which we can read out of or into a constructed reality. In a way, I don’t agree at all with Susan Sontag about its limitations. I actually see it as an imaginative field; every good picture has something to rebound off into the periphery.

In Middle Age Spread which was done in 2004, I was much more interested in content —why were photographers taking these pictures? What did they take and what did they mean to represent because the thing about the photograph is that if you miss the moment, it never happened. But then I think of Ketaki Sheth, Sheba Chhachhi and also to in certain extent, Ram Rahman, and the work produced in the early z000s, and I see an echo of what happened 50 years earlier in cinema and the kind of work that Bimal Roy, Guru Dutt, and Raj Kapoor were doing about the political landscape and the disappointment in the promise of the country. A photograph can similarly establish such depth and wide horizon.

As a consequence, I don’t think that the photo as document and art are mutually exclusive. I think in India we tend to have a very cut and dry pedagogic approach. If we look at the work of Amar Kanwar, the processes are steeped in the documentary in terms of actual research. The ground in his work is extremely important because it is located and there are histories and excavations and months of piecing together of the evidence of the speaker or the ‘witness’. But when it comes out, it’s a work of art. I think what I am surprised with is that we haven’t produced a photographer like Jeffrey Wall 3 where the collapsing of histories produces another kind of evidence.

…A very solid photographic history book would be really useful as we have tended to produce monographic publications for the most part. What we need to do is create context and evaluate —a mix of history and criticism. If you read a classical text, you’re going to get straightforward art history but you need a critical intervention quite soon because I don’t think we can first write the history and then bring in the theoretical. There will always be questions of methodology, but you can look at art history—we have the British, we have the Calcutta school of historians, we have the Allahabad school, then we have the Aligarh school, etc. It is like one history from where there are multiple threads from the same field.

The most important aspect is your circuit of exchange. We live in what is called ‘new’ India. This is a politically determined new chapter. How are we responsible to that? Am I severed from it, do I need to resuscitate, review and quote as a writer or as a thinker, and would the same apply to an artist or a photographer? In a period of intense flux, the archive therefore becomes a political instrument. 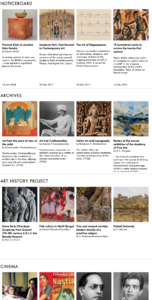