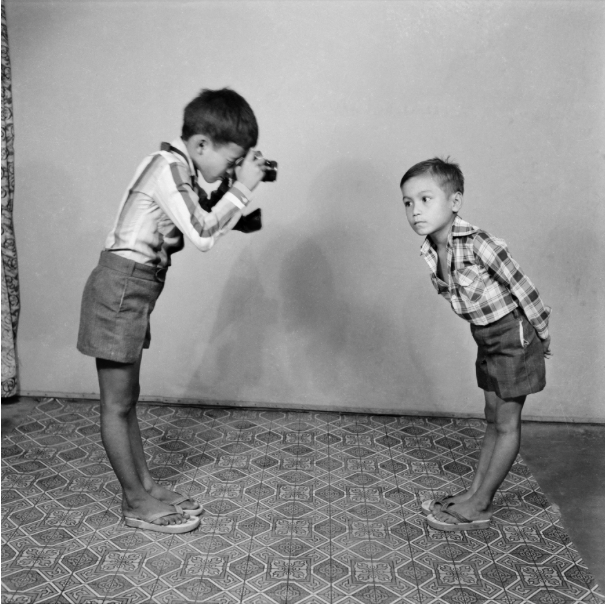 The image of the hunt resounds in the history of photography in Nepal, as British officers posed with matchlock guns pointed  at prey – the rhino and the tiger – taking aim within an enclosed compound. That history was simultaneous to the coming of the first resident photographers, the Chitrakars, originally scroll painters in the Kathmandu valley, highlighting the birth of a  new practice that shared many similarities with early studio photography in India. Much has changed with the coming of social media, and the Nepal Picture Library more specifically, volunteering and preserving its visual and oral histories and taking an unknown repository of material into the public sphere.

The idea of a network – the evolving role of the citizen and the consumer – then stands at the shifting fault line of viewer engagement, where Nepal today contributes to a global visual culture while examining its own, unravelling history with a more speculative approach. Here, little known studios, family photographs and images of state culture all seem to merge, creating a new visual genealogy. While these histories are being teased from hidden reserves, what are the consequences for the individual practitioner who exposes himself/herself to the exchange of images that are centralised online?

The current issue is a foray into emerging photo narratives in Nepal, historical and contemporary, and the ways in which they mobilise viewership. This ‘network’ is about how lines of sight are being established by practitioners within the country, as well the larger South Asian region to surmount visual hierarchies and redraft the vernacular – one that is not only regional in its aesthetics, but challenges the notion of world photography and its definition in the present. Contributing substantially to the flow of images, Nepal is poised to engage on the medium’s future.