By exploring where we come from, perhaps what we ask ourselves is: who are we? The predicaments which arise from citizenship are linked to this dilemma – riddled with narrative ruptures, reversals, and ironies: histories dislodged from pasts that are recounted differently by those in variable proximity. What is asked of us in a media-dominated present is to constantly project ourselves, our versions – a public, socialised persona, etched as a digital profile in which we relay and opinionate as a reflex to every event. Inspite of media’s virtual speed, broadcast and indexical agility, our pasts and our present continues to be a contested and mediated zone – a shadow foreshortening or elongating contingent on who we choose to “follow,” ally or share with. In this perennial shape shifting register, how do we represent where we come from at a time when our homes are rarely permanent or singular; and our opinions prone to constant pruning and honing with new strategies of information flow? How do we contend with historical discontinuities that may arise from present-day itinerancy? Is this movement part of a new transcultural shift, and how does it articulate transnationalism? How do short term engagements lead to long term encampments?

As images flicker across the multi-screens of our everyday lives, and as data sharing and mining become the most empowering tools in our democracy, do we realize how
and when we become aligned to a political will or vision? That picture of ourselves or those we disseminate becomes affiliated to other contexts; origins become less important than the circulation of ideas and clicked memories. As a consequence, nothing becomes more elusive at this time than our association to place and hence, nothing more contentious than the laws that seek to govern our actions therein. As masters of our own image, are we slowly and covertly defined by them, or by the viewers who follow us – can we ponder what the collective will of an images’ afterlife will be? At a time when fabricating situations and re-framing memories through staged images snowball across sites – the risks and ethical implications of circulating images should urge us to revisit news-gathering processes, personal as well as social. Who is to be trusted?

The Citizen issue draws our attention to such theoretical, representational if not ontological territories that cannot be deciphered uniformly – the languages are often regionally coded, and perceptions vary exponentially given those who populate a “viewership” have grown rapidly across the spectrum. As historians have noted, the term “citizen” originally referenced an idea which emerged with the Enlightenment, the heyday of scientific discovery and innovation; laws were gradually adopted to safeguard free speech, active and passive suffrage, minimum social welfare, and to debate the legalities which mandated how we should be governed. But in a world where education is a privilege; wealth, still a landlocked claim and hence the probability of justice slow and often out of reach, the rights we have are sometimes tantamount to privileges – and so “justice” finds means other than the law – vigilantes and whistleblowers; hackers and surveillance mechanisms isolated by the establishment, but unwilling to become subservient. They show us how power always has a price; and there are many willing to oblige; but they also show us that resistances and counterclaims can and have been activated.

Citizenship as seen through this issue, addresses certain pitfalls of a societal malaise, a status quo. It brings certain temporal trajectories into focus: about rights that can and should be exercised; about contemporary leftist social movements that have existed and grown; and hierarchies of viewership that have been revised, amended, and some eventually atomised. And like the myriad lenses through which we piece together a moment, citizenship too pierces a discursive vacuum to invite critical engagement, redefinition, ideological disjuncture, and sometimes radicalisation in order to recast itself as a mutable force, adapting to and demolishing emergent despotisms like a multi-headed hydra.

Is the citizen an operative of the state or does he or she have the authority to challenge it? Are there creative strategies, aesthetic productions, and collective methods of countering hegemony? … different circuits of circulation catalyze continual re-imaginings of the image … suggesting that aesthetics and art are political activity too.

The strokes made in this issue therefore canvas political art and social movement cultures – migration, regional endangerment, abandonment, impunity, statehood, and the integrated spheres of privacy and domesticity. The spread of the issue reaches across South Asia with practitioners exploring notions of community, gender, and agency in Nepal, Pakistan, and Bangladesh, and given geographical particularities therein, we question once more the very foundation of our own locational, political majoritarianism and identitarianism – with the need for an evolving cultural specificity and an emergent counter-hegemonic culture. Is the citizen an operative of the state/regime or does he or she have the authority to challenge it? Are there creative strategies, aesthetic productions, and collective methods of countering hegemony? In the issue we notice how different circuits of circulation catalyze continual re-imaginings of the image, and with the concomitant rise of art and activist initiatives, online presences – the visual field now has a distinct purpose and mandate for readability outside common circuits, suggesting that aesthetics and art are political activities too.

In this light we have also adapted or incorporated written pieces, such as “Everyday Partitions” by Sonal Khullar to present modern exhibitionary or extra-exhibitionary perspectives, acknowledging contemporary practices that recalibrate archival traces, historical contexts and meanings. We have tried to develop trajectories around notions of how parenthesised forms of citizenship may incite homogeneity, which may play out curatorially as well. As there are different political and social prerogatives within S. Asia as a whole – a politics of vision is also gradually realised in all viewing cultures or regimes – state media, printed outlets, and displays; suggesting that the environment or conditions around viewing is sometimes as significant as subject matter. This is perhaps the sieve that this volume may offer – distilling how institutional powers that display or share images now seek renewed “cultural capital” – a participatory form of the debate- making and dialogue beyond notions of the national or transnational.

With an eye also to post-Independence developments that responded to Partition within the media sphere, this volume brings to light important contributions which have questioned a subsequent prescriptive media status quo: the work of Sunil Janah and subsequently Janam and Sahmat as critical offshoots of the Communist Party following Safdar Hashmi’s death; the work of Shahidul Alam on the India- Bangladesh war of 1971 with Autograph in the UK; the place of art and reportage in an environment of political turmoil authored by Iftikhar Dadi; publishing the writings of marginalised communities by Ruby Hembrom; the work of Zubaan in pioneering a feminist trajectory. But even these developments have historical, institutionalised antecedents to which resistances have arisen. As author Koenig Lion has examined in his publication on media (2016), the Ministry of Information and Broadcasting (MIB) set up in 1947 ascribed a vital role to nation building, comprising of three units to AIR, PIB, and Films Division. Though these organisations were of colonial origin, the prescriptive documentaries that were produced over time, focused on rights and responsibilities of the citizen, civic sense and discipline. Our Flag (1952), Our Constitution (1950), Democracy in Action (1951); It is Your Vote (1956); Our PM (1957); were among the many series made. This trend seemed to continue till 1961, with an effort made towards an emotional integration, and the MIB continued to commission more films, such as Good Citizenship (1961-2); even books like Better Citizenship which brought to light the dangers of casteism, lingualism, and other separatist tendencies.

We suggest that this image-generation of the mainstream has been routinely countered by the disenfranchised and the subaltern so as to rouse awareness in a steadily regressing, xenophobic political or social climate (Diwas). We try to highlight the fissures around aspects of representation in a stratified society, and the inability of traditional structures to accommodate or adopt unconventional means so as to address censorship (Saha). The postcolonial state in which we live is marked by regional ruptures emanating from language and ethnicity, all of which fall within the larger rubric or ambit of “culture.” But have there been persistent theoretical or analytical outlays about the kinds of images which prefigure the national or provide adjuncts to representational restrictions? The inter-disciplinarity of this debate-making is therefore crucial, as it also means that the place of the citizen multivalent, hybrid, and unsettled, thereby seeking dynamic forms of cultural expression.

In the last decade, as scholars have thought of dialogues and counter-dialogues in terms of flow and counter-flows – and hence resistances and counter-resistances – this issue embraces a comparative methodology by observing social movements, formations, solidarities and affinity groups. It suggests that the role of counter-discourse is to constantly make visible the histories of social movements and teach us about collective cultural production. And though the role of identity politics and linguistic federalism have shaped the ways in which we are trained to interpret the constitution and its ideologies, has there been a resistance through cultural powers of the state? The student movements of the last decade provide immense direction – JNU, Jadavpur if not FTII among others – and they certainly refract and spotlight the visual testimonies in this issue of Karan Shrestha or Nilargha Chatterjee of disenfranchised communities; Siva Sai Jeevanantham’s tale of politics in Tamil Nadu; Rohit Saha’s searing commentary on extra-judicial killings; or even Shuchi Kapoor’s narrative of exiled communities.

All of these dialogues in tandem provoke our considerations of the public and a subaltern counter-public, and hence a necessary counter-citizen. The latter has arisen in a new millenia, hatched in our midst from the fabric of society itself, a descendent of historical evolution and time. The moment has therefore come for politics to pay attention to their polysemic ways which continue to infuse opinions, attitudes, rhetoric, statistics – and celebrate the individual in the state, until the latter becomes more porous, inclusive and emancipated.

The Citizen Issue then presents an image of society that morphs with different image-makers, different counter-citizens, who, as Abdul Wali Khan’s quote at the beginning suggests, show us how identity and citizenship are hyphenated by the subtexts of authority, allegiance, subjectivity, and belonging, and thereby suggest not only who we really are … but who we must be. 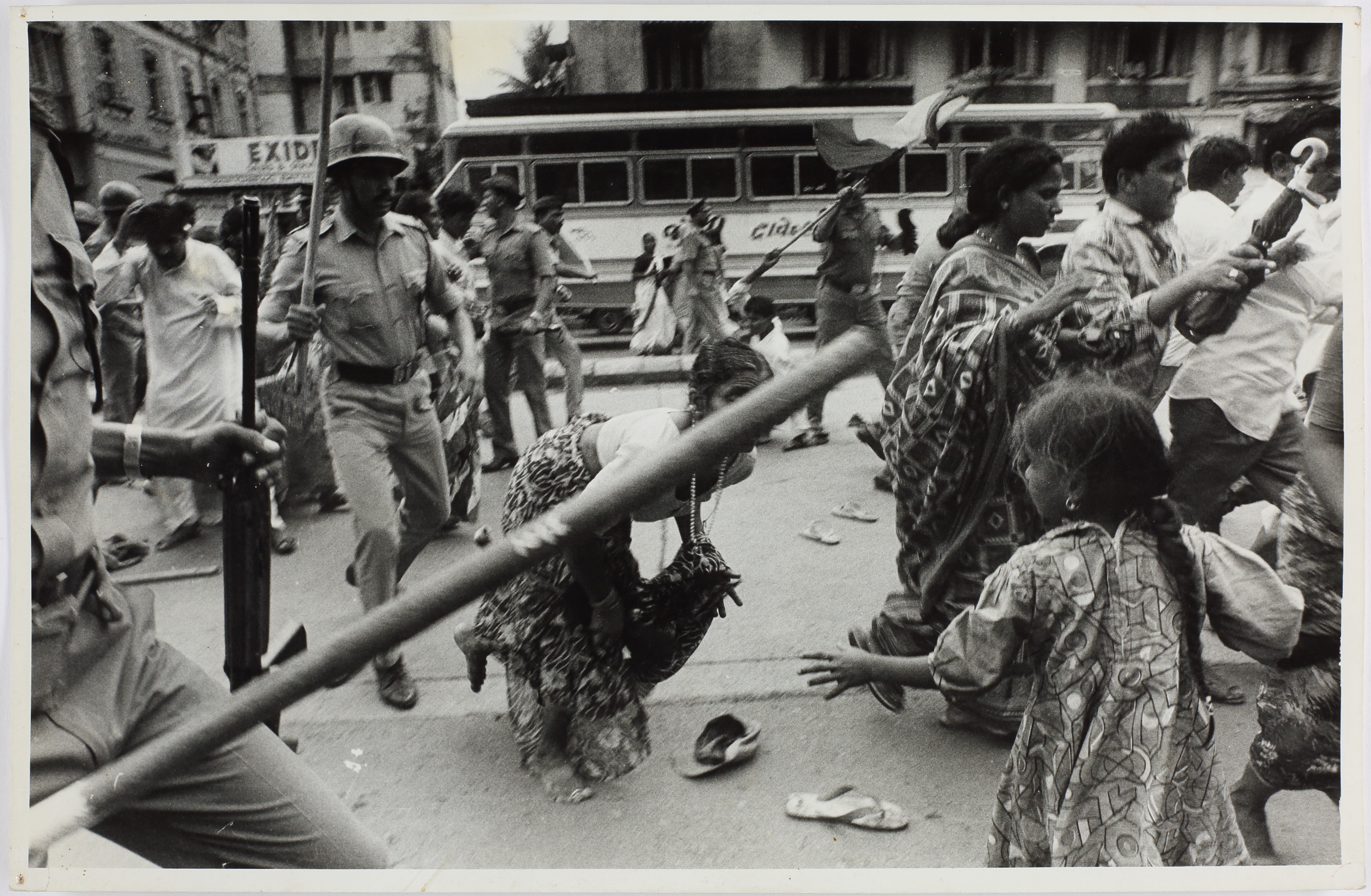 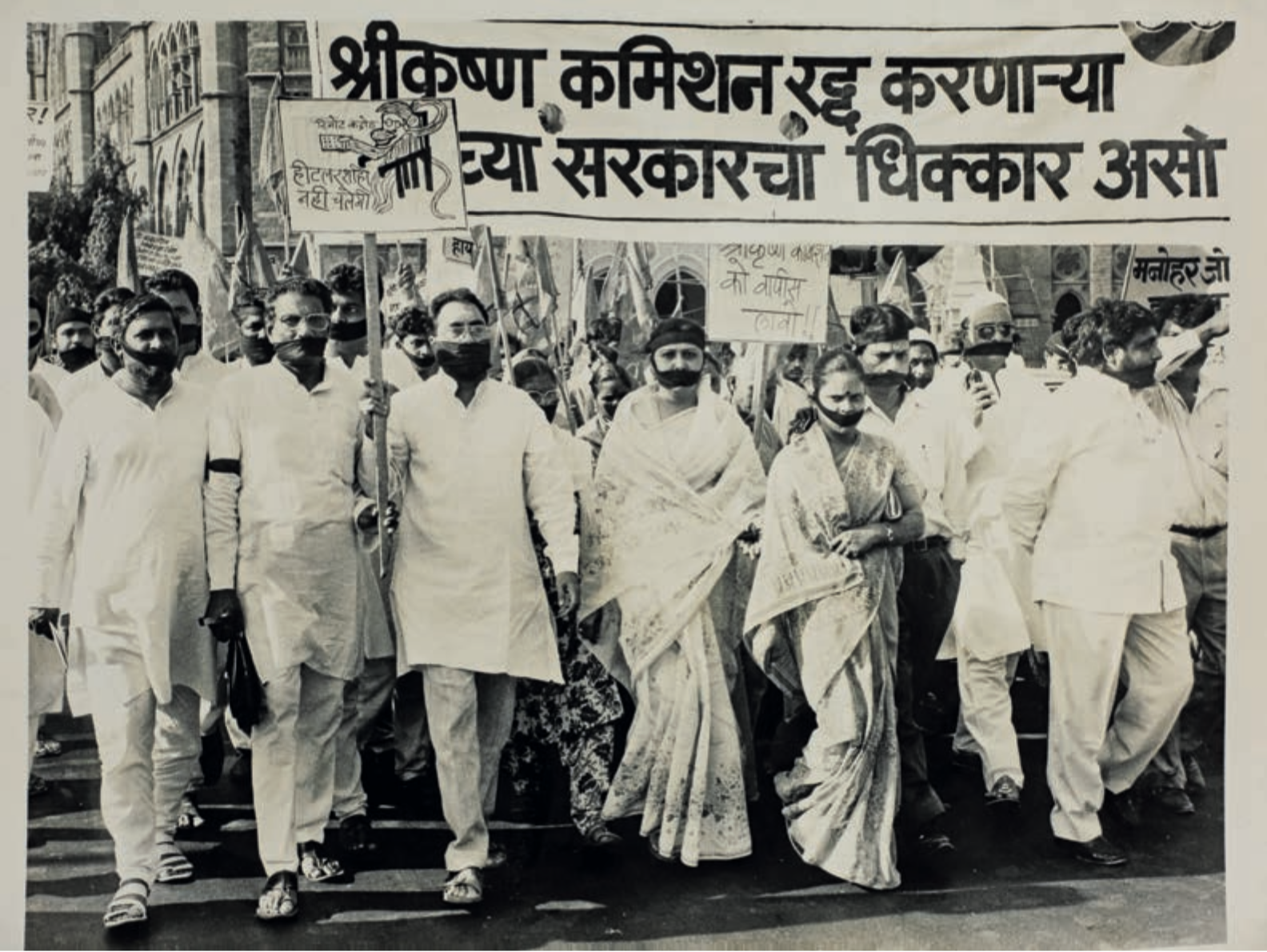 Samajwadi Party leaders on a Silent Protest March to the Ministry demanding revival of the Srikrishna Commission, 1966. Private collection. 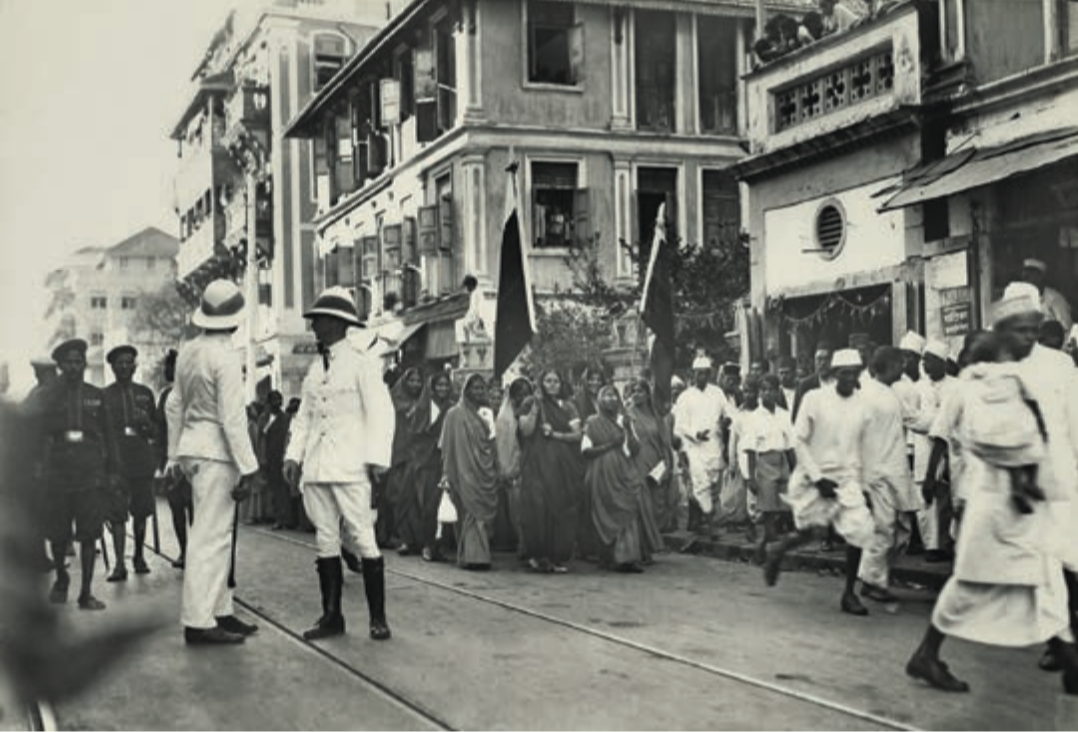 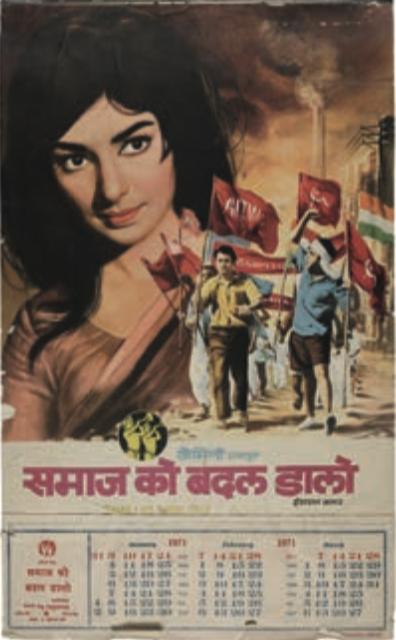 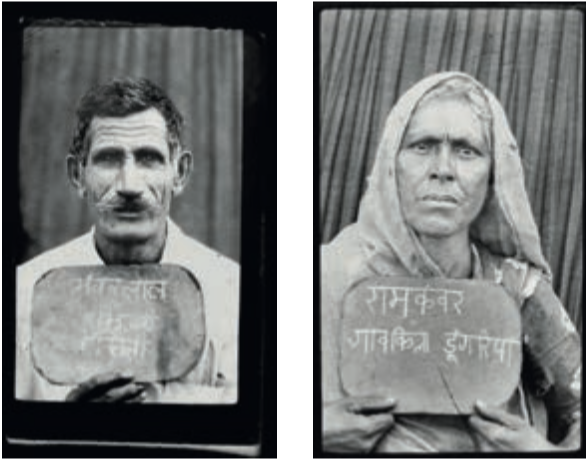