A Transactment of Images or Bodies in Space

An operation of bodies lost in space, en medias res – actions and contortions as one occupies the other, takes him or her through a dream sequence – ethereal acrobats in a perennial battle to exist. Is this an enactment, an embodiment of a past edging into the present, a rebellion of freedoms from their attachments, their memories – and so, where is the self? Merely a performance for the camera? The black and white spaces amidst grey textured skin, stretching that moment until a sudden awakening into the frame or a limitless force, a momentum’s intensity of will driving each other as opposites, seeking one another – guided entities, involuntary stars soaking radiance.

Clip by clip, each succession of images is a composite, seeking connections with the whole – each lineament is life, every border is an opening though nothing is certain but the entanglement, the chaos of affections, the affliction, rheumatism and fatality of attraction. A rhizome of ceaseless gesticulations towards a fraction – a giving birth or the taking of life – like an aperture or a crack through which sounds can be heard, figures fleet past but is someone there?

The photograph, is it a gendered name for reality? Can an image ever be a neutral claim? Is it always desired as an abstract formation of light? Was the first image of the open window ever completely devoid of impulses, was it pure experimentation? To set free, to enliven – not to see the world but to watch it closely. Will the last photograph ever be certain of an ending, its own?

While making images, something always seeps in that was never really there – an object-like white noise clambering for substance, forming its place on a surface of a gelatin coated plate, a sense of presence, of a figure that has no succubae or incubi, that looks upon the image as a reference to the ‘other’, the insinuation of moments wrought upon desires – all those yearnings. Can photographs make us change so much, and want so little? Visit so much yet demand so little? 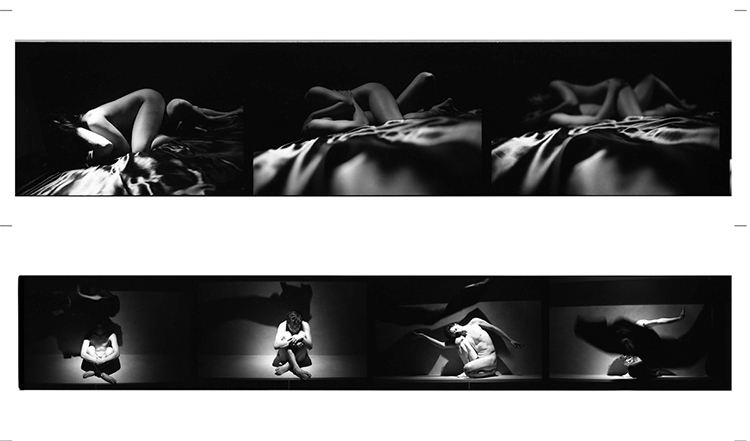 The Balance: Yin and Yang have always been coarse, as opposites that attract only each other – have always made polarities come so near but never completely fuse. Perhaps then a spiral may do the rest – take the vestige of a moment and sever its umbilical to a beginning or an end – take an Adam away from the one and only Eve and allow free association. What would we have without reckoning or penance or salvation – pure torpor, stilled transience, fractal waves that lie insensate, motionless? This is a space that shifts its gravity from distances to nearness’s, from me to you, or was it never that directional, just another spiral for all of us?

The dancers rave as they mock and free themselves from the trappings of a body, ruthless in trying to cast itself aside for feeling, for time, for sentiment, for the yearning of an instant of pure haste, of pure momentary collapses. Where the forces of one body collide with another, where the temptations of equal distances come upon a fraction of differences yet cannot tell whether one is more than the other. Is this the profanity of a love that knows itself to be a lie? Is every frame, a truth?

The tree that casts its net of shelter…is that shade less or more than needed, the force that from the green pasture takes its strength, takes it to the space where noise is lifeless and motion, a force of nature. The rose that has its red cannot tell the arcadia that its whiteness is a lesser hue of passion and rage – that blackness is without depth. This is an equal image in shades of grey, an image cast from sight, oxygenated by spirits. It is the gesturing of a touch that a performer makes, it is a sound that never hesitates to construct its static, and it is the odor of things sexed, free and forgiving.