Miracles Do Happen, Even In Police States

Where does the desire of a lifetime begin? Mine began, I think, with snow. The earliest games I remember playing as a child in Rangoon involved snow. Our home in those days of the early 1950s was on two floors of a four-storey edifice called the Thomas de la Rue building. Upstairs, on the top storey, was the North Pole: a big empty loft where I would try to lead my playmates on pretend Arctic expeditions. Snow was a miracle, a chimera that called me to impossibly distant places.

I couldn’t wait for a time when I’d see for myself the wonders of a world as sprawling as the landscape in that fairytale, “East of the Sun and West of the Moon.” At 16—with school behind me and a music scholarship in California awaiting me; with my blue Samsonite suitcase packed and repacked daily, months ahead of schedule—it seemed my time had come.

Then, in March 1963, with only three months to go, everything changed. One night, a car drew up under our front porch and woke my mother. Seeing an army Jeep outside, she shook my father awake. He looked at his watch as he got out of bed. Three o’clock in the morning.

At the front door was a young man in uniform. “Uncle,” said the Captain, “let’s go. And don’t touch the telephone, please.” When she looked out the window my mother saw that the house was surrounded. Apart from the Jeep, there was an open truck full of armed soldiers, and an army station wagon. In this station wagon our father was taken away. 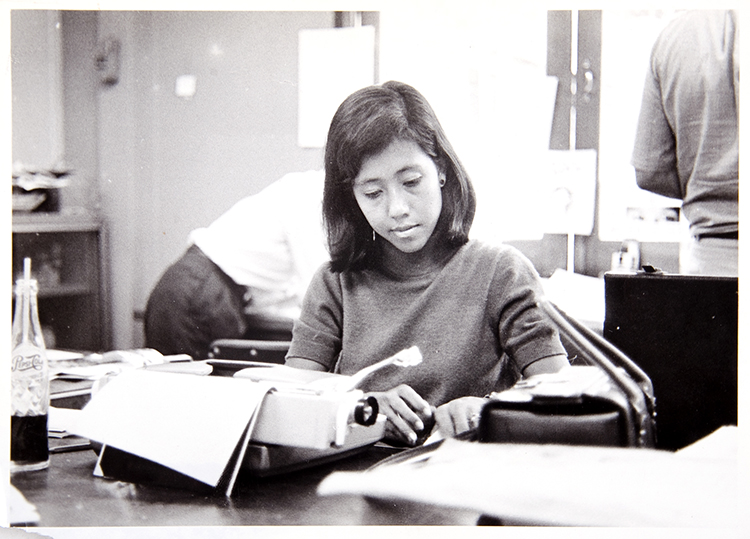 Days passed, then weeks, then months—and still we were in the dark about where Dad had been taken, or when if ever we would see him again. One day, eight months after his disappearance, an official letter finally arrived. Editor U Law-Yone (my father was editor and publisher of the leading English-language daily, the Rangoon Nation) was “under protective custody”. He would be allowed to write one letter home every other week. On alternating weeks he could receive one letter from home. No letter should exceed two handwritten pages. There was no mention of visits—then, or at any time in the five years to follow.

Not long after my father’s arrest, I gathered the nerve to broach a difficult subject: my passport. My mother looked at me, uncomprehending. “What passport?” “Shouldn’t we be applying for it?” I said. “We’re running out of time.”

My mother said, “You must be joking.” Then, seeing I wasn’t joking, “I can’t believe this. Your father’s in jail—or worse—and you’re still thinking of leaving? You are that selfish?” I was, in fact, that selfish. It seemed to me urgent to leave, especially because my father had been arrested. Something told me we weren’t going to see him any time soon. Prime Minister U Nu and his cabinet ministers had been picked up a year ago, when the military took over, and they were still in jail. More and more politicians, journalists and students were disappearing in the dragnet cast by the MIS (Military Intelligence Service).

Months later, following her advice to “make the best of things”, I was enrolled in Rangoon University. But halfway through the first term, both my mother and I were summoned to the registrar’s office. There we were informed that, as the daughter of a political prisoner, I was officially barred from classes—at the university or at any other institute of learning.

I could see my mother biting her lip and hoped she wouldn’t cry. When she did, I hated her even more than I hated the registrar, and shot her a look that said, “See? What did I tell you? And you wanted me to stay.”

The pile-up of frustrations gave me license, as I saw it, to sulk and mope. When not plotting revenge on one adversary or another, I was plotting escape. In my fantasies, I drove the smooth highways of America in an open convertible. I roamed the cafés of Paris, rubbing shoulders with Jean-Paul Sartre and Simone de Beauvoir. I sat in the front row of a concert hall in Moscow, watching the hands of the great Sviatoslav Richter on the keyboard of a Steinway grand. I dreamed, like Bing Crosby, of a white Christmas.

One day I was invited to a piano recital at the Goethe-Institut in Rangoon. During the intermission, I met an American couple who introduced me to their house guest, another American by the name of Sterling. We sat and talked for about 20 minutes. Then, when the concert was over, we went our separate ways.

Six months later, Sterling—who was in San Francisco—and I were launched on a long-distance romance. The forbidden nature of it appealed to our mutual love of secrecy, danger and adventure. For the next year and a half, we wrote to each other almost daily. Our letters escaped the post office censors by coming and going through the diplomatic pouch, thanks to sympathetic embassy friends. We were married in Rangoon, two years from the date of our first meeting. I was 20, Sterling 10 years older.

Over the next few months, Sterling flew in and out of the country, while I tried repeatedly to apply for a passport—each time to no avail. It was time, we decided, for me to take the “back door” —the underground route to Thailand favoured by smugglers, petty criminals and insurgents. Early one morning in May, I set out for the train station with my brother, Alban, and a gem smuggler who had agreed to lead us through the eastern jungles to a safe crossing at the border with Thailand.

We never made it that far. At the river port of Moulmein, on the very first leg of our journey, we were picked up by the secret police and brought back to Rangoon. Once at the MIS headquarters, my brother and I were separated and held in different rooms.

The interrogations lasted from nine at night to nine the next morning, the officers working in teams of four, changing shifts at 3am. For the next 10 days, the routine was unvarying. ”What makes you think,” the Colonel said with a pleasant smile, when I had asked for the umpteenth time, “that you’re ever going to be released?”

I was doomed, I now knew. Just as my father was doomed. I was never going to get out of jail. Nor was he. Now I saw that nothing could possibly come of any talk of release. Now I knew what protective custody meant. It meant you could be locked up one day just like that, and remains locked up until God alone knew when—and not a thing in the world could be done about it.

Miracles do happen, even in police states. Ten days after our arrest, without warning or explanation, my brother and I were allowed to go home. Months later, just as I was beginning to give up hope, a messenger cycled up to our front door one morning and handed me my ticket to freedom: an exit permit and a certificate of identity, the stateless person’s passport. On the night of 15 July 1967, I drove to Mingaladon airport in the spooky atmosphere of a war-time blackout. Because a curfew was still in effect, nobody came to see me off, but our driver, Maung Thein Htun, tried in his quiet way to make up for the lonely send-off. He had brought me as agoing-away present a small paperback, a Burmese cookbook. Whenever I felt homesick, he said, I could follow one of those recipes. Then maybe I would think of him a little, too. From my seat in the back I could see the sad movement of his Adam’s apple.

The airport seemed utterly deserted and for once even the MIS were out of sight. Then a Thai International attendant appeared led me to the ticket counter and before I knew it I was being escorted aboard Thai International Flight TG304, where I discovered that I was the one and only passenger.

It was my first time on a jet and I was white knuckled: not from fear of flying, but from fear of flying back. Just before boarding I had overheard an exchange between two members of the ground crew. Point of no-return, was what one of them had said jokingly. Something about how on a short flight like the one before us (we were flying from Rangoon to Bangkok, an hour-and-a-half away), there was no point of no-return.

No point of no-return! But what did that mean? That the plane could be ordered to turn back at any time, right up to the verge of landing? The alarming paradox held me in thrall for the rest of the flight—until the plane touched down at Don Muang International Airport right on schedule, the wheels skipping a little before coming to a stop. Out on the tarmac, two strangers were waving to me. One of them, I realised with a start, was my husband.

Endings, like beginnings, are never as clear-cut as we wish them to be. One life had ended for me, and a new life had begun. The commercials on the television sets in Bangkok all seemed to shout out my hard-won status: FREE! FREE! FREE!