Shoot You Dead, Shoot Me Dead

Susan Sontag’s On Photography Was Published In 1977, and it remains astonishingly incisive. Look, for instance, at Sontag’s description of photography in the first chapter of the book, which establishes a voice, an attitude, an approach that is maintained throughout. Sontag describes photography as, among other things, “grandiose,” “treacherous,” “imperial,” “voyeuristic,” “predatory,” “addictive,” “reductive,” and “the most irresistible form of mental pollution.” A typical sentence reads, “The camera doesn’t rape, or even possess, though it may presume, intrude, trespass, distort, exploit, and, at the farthest reach of metaphor, assassinate—all activities that, unlike the sexual push and shove, can be conducted from a distance, and with some detachment.”

So, too, was Roland Barthes’s Camera Lucida, first published in France in 1980. Delicate and playful, this book is a love letter to the photograph. Barthes celebrates the quirky, spontaneous reactions that photographs can inspire—or at least the quirky, spontaneous reactions they inspire in him: “A photograph’s punctum is that accident which pricks me (but also bruises me, is poignant to me).” Still, Camera Lucida is a very odd valentine, for Barthes describes photographers as “agents of Death” and the photograph as a “catastrophe”; also as “flat,” “platitudinous,” “stupid,” “without culture,” and—most unkind—“undialectical.” The photograph “teaches me nothing,” Barthes insists: it “completely de-realizes the world of human conflicts and desires.” 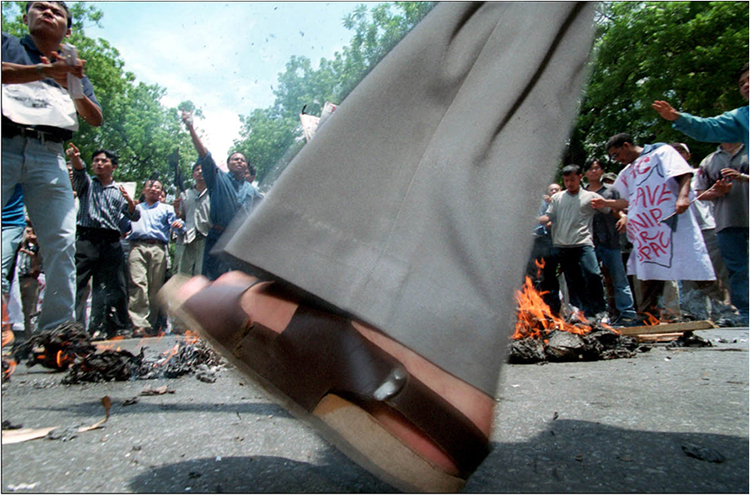 Continuing this classic-modern tradition of photography criticism is John Berger, the most urgent, morally cogent critic that photography has produced. “My first interest in photography was passionate,” Berger has written (as a young man, he wanted to compose a book of love poems illustrated with photos), and when you read him, you believe him.

The images presented here were taken during Kaushik Ramaswamy’s stint as a photojournalist at the Hindustan Times. Unlike Berger, he has taken a decidedly dark view of the practice. Photographs of political violence are at best useless and at worst narcissistic, leading the viewer not to enlightenment, outrage, or revolution but instead to a sense of “his own personal moral inadequacy.” More generally, these photographs are a form of “violence” and in that violence, decidedly framed, is our own lack of freedom and our overwhelming lack of empathy.