A Bright Star Will Shine

My second visit to Yangon in December 2016 coincided with the opening weekend of the Mingalabar! Festival. The Institut Français de Birmanie (IFB) in collaboration with the Government of Yangon Region, organized the first ever multi-disciplinary arts festival, taking to public spaces at an unprecedented scale. Giant puppets paraded the streets, itself ablaze with street art, dance, a rock concert, video mapping and art exhibitions. People gathered by the thousands – families, couples, students, and virtually every age group/class of locals and foreigners – to witness the spectacle. The energy and excitement was infectious. What became apparent to me wasthe complexity of debates around culture that were being addressed at this very unique time in Myanmar, deliberating questions of representation, inclusion and identity.

Myanmar gained Independence in 1948 after more than a century of British rule. Post WWII Burma was a cosmopolitan mosaic, with immigrant populations dispersed across the land. The British had put into place a series of economic overhauls and rail constructions, re-settling populations from many parts of India to Rangoon. On the surface, the economy was slowly recuperating after the war. However, just a decade after Independence, a military-led caretaker government was formed with General Ne Win at its head. By 1962, a military coup established a single-party state with the Socialist Programme Party, setting the tone of ruthless, authoritarian rule for decades to come. In 1988, almost 3,000 people were killed in anti-government protests. The State Law and Order Restoration Council (SLORC) was formed with a “mission to eliminate all forms of internal dissent or rebellion”. 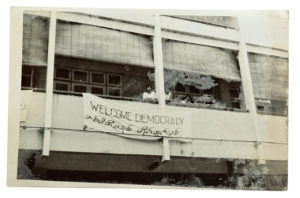 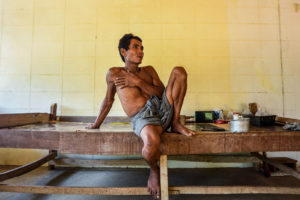 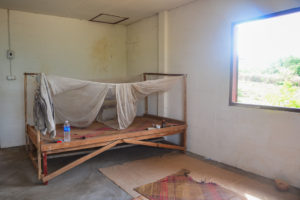 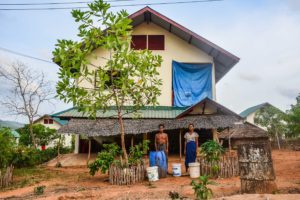 Many of those killed were students, artists, writers and journalists. SLORC arrested thousands of people, including the National League for Democracy (NLD) opposition leader Aung San Suu Kyi, who was put under house arrest. In 1990, when the NLD won 392 out of 429 seats in the first free general election held in 30 years, the military government did not recognize the results. As indicated in the Foreword, what followed was the systematic isolation of Myanmar from the rest of the world – arms embargos, the suspension of aid other than humanitarian assistance, economic sanctions and visa restrictions. However, much of this changed in the build up to the elections of 2016, which saw the sweeping victory of the NLD with Htin Kyaw becoming the first civilian President of the country in more than 50 years. After the initial euphoria, have come the pressing questions: How can Myanmar transition to democracy with a constitution that reserves 25% of the seats in Parliament for military appointees? How can the election reflect the popular vote when the constitution effectively prohibits Aung San Suu Kyi from the presidency? Beneath the surface of trust, cooperation and confidence being built by the current regime, there is a feeling of uncertainty.

Myanmar, blessed in many respects with coveted natural resources such as oil and jade, is trying to widen its impact through strengthening trade and economic ties with other countries in the region, particularly after joining ASEAN in 1997. But at what cost? In Dawei, the capital of Tanintharyi region (seen on p.4), a special economic zone (SEZ) infrastructure project began in 2010 but was suspended in 2013. Plans to resume construction were announced in August 2015, and have yet to materialize. When complete, it will be the largest industrial zone in Southeast Asia, developing local businesses, providing employment, and stimulating infrastructure; however, it is also notable for its tumultuous past, as many glaring industrial and human rights violations have arisen during the project’s tenure. 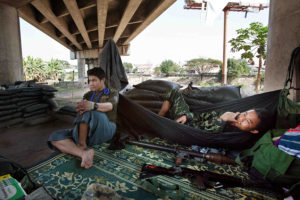 Burmese students return to their village after school, which is on the Thai side. 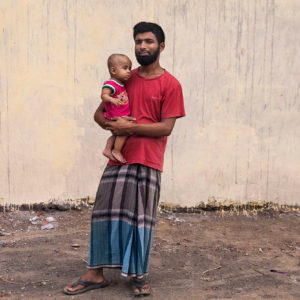 Ali Johar with his 7-month old son born in India 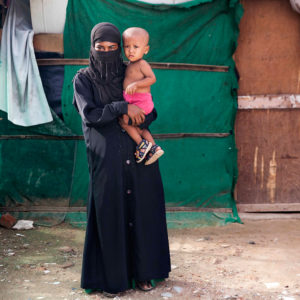 Noorhaba Begum with her son, migrated in November 12, 2016

Furthermore, and perhaps more problematic in the modern history of Myanmar, are the multiple fractures and clashes that have grown amongst ethnic groups, often leading to protracted violence and skirmishes. The Burmese Citizenship Law adopted in 1982 states that anyone who arrived after 1823 would not be considered a citizen. This law isolates ethnic groups such as the Kachin, Karen, Chin and Rohyinga as “associate citizens”. The most critical issue remains the legal status of the Rohingya in Myanmar and the implications that it carries in practice. While they have been permitted to reside in the country, most Rohingya are considered by the Burmese authorities to be “resident foreigners,” not citizens. The lack of full citizenship rights means that the Rohingya are subject to other abuses, including restrictions on their freedom of movement, discriminatory limitations on access to education, and the arbitrary confiscation of property. Many of these refugees have fled to neighboring countries such as Bangladesh and India (facing page), where their fate hangs in the balance. 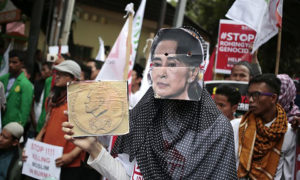 In this Nov. 25, 2016 file photo, a Muslim woman wears a mask of Myanmar’s Foreign Minister Aung San Suu Kyi during a rally against the persecution of Rohingya Muslims, outside the Embassy of Myanmar in Jakarta, Indonesia. (Dita Alangkara, File/ Associated Press) 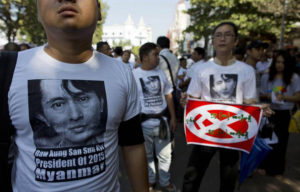 Jan 2014. Supporters of Myanmar opposition leader Aung San Suu Kyi, wearing T-shirts bearing her portrait, take part in a protest march in Yangon to push for her to become President. Suu Kyi’s party held meetings with the public to assess their views on amending or redrafting the country’s army-dictated 2008 constitution, which disqualifies her from becoming president. (Associated Press)

So just where does art today reconcile with politics and society? In my conversations with several artists, a few of whom were incarcerated after the 8888 Uprising (8 August, 1988), one of the foremost issues being tackled, even today, is about the exposure of art in the public domain. There is great disappointment with national institutions that should support the work of a rising generation of visual and performance artists. Practitioners like Aung Soe Minn (Pansodan Gallery) and Aye Ko (New Zero Art Space), have hence emerged as institution builders and facilitators, paving the way for future generations. For Aung Soe Minn, the ‘tea shop culture’ where artists, students and intellectuals would gather to talk politics and art, germinated over time and compelled him to create Pansodan Gallery and Pansodan Scene. As someone who steers clear of what he calls ‘propaganda art’, Aung Soe Minn also collects vintage photographs and documents, wanting to establish a visual archive of ‘modern’ Myanmar through its history of cinema, print culture, equipment and even picture postcards. When asked about his hopes for the future of artists, he had this to say: “The main thing I feel about Myanmar currently is that society and artists are divided. We need a better understanding of the history of art and culture. What are the hidden histories? What about looking beyond painting? Myanmar has so many ethnic groups and has had too many conflicts, too many civil wars. In some ways, I feel art is the only way to lead the people out of this. We need an era of true peace to create a better culture of art.”

Aye Ko, a prolific performance artist himself, founded New Zero Art Space as an educational platform as well as a gallery and residency space. More about this is presented in Haymann Oo’s piece that follows, who is the curator there. 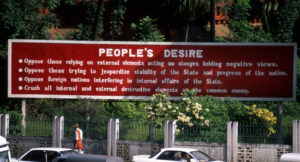 The People’s Desire, as dictated by the military junta, is posted in all of Myanmar’s public parks and published daily in the country’s propaganda- ridden newspapers. (Irrawaddy Times)

On the other hand, the artist and activist Htein Lin, a former political prisoner between 1998-2004, speaks of political activism through his practice. He revisits those traumatic years by finding immense resilience, strength and solidarity in a group who shared the same fate and faced similar traumas. With growing, prolific bodies of work, one recent project stands out for me. A Show of Hands was displayed as part of The Storyteller exhibition held at the Goethe Villa in Yangon in 2015. After spending seven years in prison, and then seven years in exile in the UK, Htein Lin and his wife Victoria Bowman were allowed to re- enter Myanmar in 2012. It was a reunion of sorts, where many political prisoners re-connected and Htein Lin decided to find a way to record their shared history. He took to plaster of Paris as his medium, casting their hands whilst recording their individual stories. The initiative eventually evolved into a multi-media project, with sculpture, video, photographs and text.

The legacy of these artists is how they have continued producing their work inspite of harsh circumstances, enabling the current generation to learn by example. In this issue of PIX, titled Inclusion, the idea was to give voice to concerns shared globally, but from within the region – gender, migration, citizenship – by volunteering distinctive visual styles and forms. We have devised a general grouping of works which allows, for instance, Aun Raza’s photographs of everyday life in Yangon to be seen against Elizabeth Rush’s “still lifes” of buildings and interiors; through Pablo Bartholomew’s photos, we see the “other” Burmese communities, while viewing urban encroachments into famous tourist sites such as Bagan by Farhad Rahman. Documentary photography as a narrative device, unfolding like a film reel is seen in Minzayar Oo and Debasish Shom’s depictions of the jade mining and the oil industry respectively. We have also tried to suggest a playful link between the archival and the contemporary through Aung Khin Myint’s recycling of found photographs, Lukas Birk’s Myanmar Photo Archive and the personal photos of the famous Burmese actress Myint Myint Khin. We then conclude with bold explorations of gender and the body through the works of Marylise Vigneau, Mayco Naing and Nay Thway.One of the moments from the Migalabar! Festival which stood out for me was the video mapping, a projection developed specifically for the architectural contours of the Town Hall in Yangon. Accompanied by pulsating music, the show ended in a vision of floating paper lanterns. A short text was projected, line by line in Burmese and English, on the façade of the building (reproduced below). A message that had a lasting resonance on the mixed community that observed with rapt attention, imbibing the words together:

Forget it, our terrible past

Leave it behind, the freedom which we will

Who will gain karma?

Troubles of an unpredictable nature…

Don’t give up, try hard as you are only human

Who can stop you?

There will be a future, very near

The bright stars did shine once

But who can stop you?

Today is for everyone! 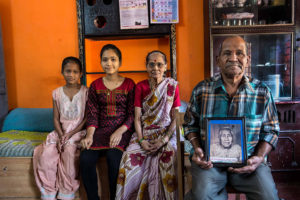 Pablo Bartholomew. Chandu Pawar, the eldest son of Tu-Tu, with his wife and two of his daughters in the outskirts of Ratnagiri, 2014. He holds his mother’s photograph. Tu-Tu was the granddaughter of King Thibaw who, along with his wife Queen Supayalat and their daughters, were exiled to Ratnagiri, Maharashtra in India in 1885. 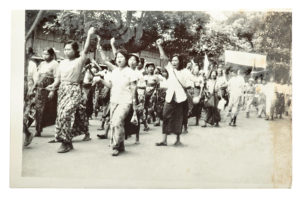