New Zero Art Space is a nonprofit visual arts organization that was established in Yangon in 2008 by artist and curator, Aye Ko. Aiming to empower and educate a new generation of practitioners, the gallery and art library promotes local, contemporary voices through its display of sculptures, video, performance art and photography, but also fosters collective training and debating through workshops, free classes and a residency programme.

For young artists in Myanmar today, the focus is on location, regionality and identity, but the effort is also for it to be universally shared and understood. History and politics, as a consequence, play an abiding role in much of the work, a way of empowering the artist by charting unexplored territories and asking pressing questions about the ‘moment’ they inhabit.

Among these artists, some of whom are mentioned henceforth, Mayco Naing is a commercial photographer who delves into conceptual work emanating from societal malaise. With reference to her project titled, Freedom from Fear, inspired by its namesake book of essays by Aung San Suu Kyi from 1991, she says, “What we have in common with the previous generation, like our parents, is that we still feel like survivors of a brutal history. It sometimes becomes very hard to find a way of expressing ourselves publicly, hard to feel a sense of freedom in our society, and that is simulated in these underwater portraits, even as we imagine a new political situation arising from the elections in November 2015. Will that allow us to breathe a little easier?” After photographing her contemporaries from different social backgrounds, she questions whether they will be able to rise above surface tensions created by the state and embrace their own desires or ambitions. As a way of probing the current scenario, some of the issues she raises are about generational frustrations – being jobless in spite of receiving a college degree, having to live abroad in order to have a chance to succeed, or abstaining from voicing opinions in public.

Khin Thethtar Latt, who goes by the name Nora, is a multi-media and performance artist. Her series Hunger, is driven by the examination of different kinds of cravings that exist – the government’s power-lust to oppress and censor, and the people’s resistance of it. She intimates how Myanmar’s democratic movements are strongly linked to student uprisings, in particular the one of 1988. Nora then depicts 3 generations of women – past, present and future – dressed in the standard student uniform: a white longyi (which was previously also a prison uniform) – highlighting the students’ continuing, radical stand against military governance, and how they too have an unsatiated appetite for freedom.

Yadanar Win’s Random Marriage satirically alludes to the country’s transition to democracy through scenes of a traditional marriage in a deeply patriarchal society where women’s rights are still in peril. To the artist, the democratization of Myanmar, ironically, is no different from the marriage of a woman whose rights are curtailed. Since November 2011, the government of Myanmar has rapidly, somewhat hastily, moved to form a quasi-democracy, leaving many internal issues unresolved. The man in the images holds a gun while donning a different ‘mask’ or identity each time, suggesting that governments may change, but the military still has an overbearing presence. Censorship has been somewhat relaxed, but rising levels of deception are ingrained in the very fabric of traditions. Hence, citizens who lack knowledge about the constitution and the changes that are needed, resemble the bride, who unassumingly accepts the status quo.

The politically acute voices of all three artists have been given space to integrate and demonstrate their work at New Zero. Though this would not have been possible even a decade ago, the time is ripe to dismantle certain stereotypes or monoliths. Perhaps this is why feminist concerns, even those related to disciplinary practices as well as employment, are being given precedence. Furthermore, inspite of what has occurred, this generation is inspired by their predecessors, who struggled to realize their dreams. It is now paving its own path with discerning gestures and strategies, visual codes and performances, to inspirit those who may take on the mantle. 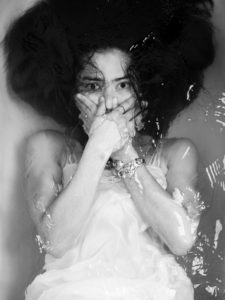 Mayco Naing From the series Freedom from Fear Yangon, 2014 Digital