From a Gurgaon high-rise, a zoom collapses the distance between camera and migrant construction workers, etching them as symbolic labourers on a Brechtian stage, fragile silhouettes alienated from the very structures they have created. Nearness and distance as spatial phenomena capable of truncation are also apparent in diptychs of migrants phoning home, mobile numbers on slips of paper, paper tickets yielding a sense of momentary proximity and intimacy. (Historical footnote: the daguerreotype camera and telegraphy were both introduced into India by the same person).

These images play with photography’s cut-off-ness, the manner in which its space is better described as a ‘screen’ rather than a ‘frame’, to recall André Bazin’s distinction. In painting, there need not be an ‘outside’ since everything within the image can curl and dwell inside the frame in a space of apparently pure internality. The edges of the camera’s screen, by contrast, are abrupt, their hard edges forming the frontier of a potentially revolutionary vision that Walter Benjamin named the ‘optical unconscious’.

WHEREAREYOUFRO, a T-shirt in the image below demands to know, felicitously marking through a linguistic accident (a product of the translational complexity of the international textile industry) the severance that some practices of photography demand. Its insideness necessarily directs our attention to an absent beyond, the missing ‘M’ (and possibly a question mark) that lies outside the slogan. Photography likewise always engages that offscreen space, the outside of which its inside is always a tiny fragment. By contrast, paintings— imprisoned within the frame—rarely ask us to imagine what lies outside. The photographic parergon—that ambivalent boundary that marks what is supplementary and which has obsessed thinkers from Kant to Derrida—lies at the heart of much the work in this issue. 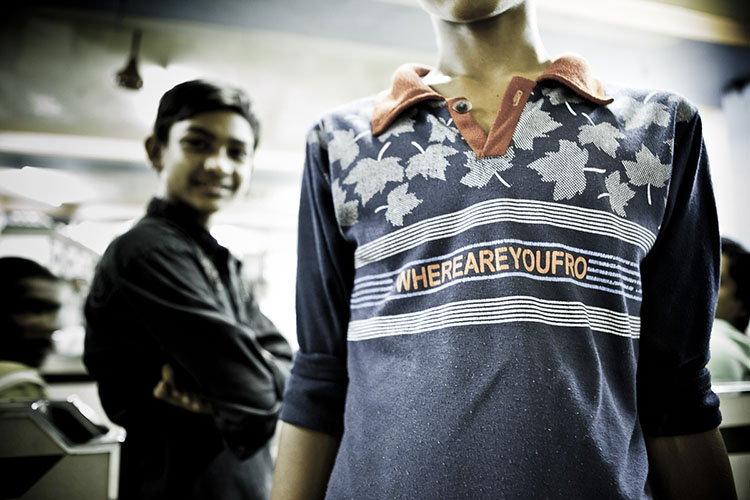 “Imagine the damage done by a thief who robbed your valuables of their frames”, Derrida once observed. The camera is such a thief with the potential to liberate us from the cultic and hierarchical through its assault on the parergon, with its continual and insistent gesturing to the outside. Where does the photograph end? In Amit Sheokand’s work, a figure stands on a table in order to reach a noose which we do not see until the next image. The nature of the screen which imposes this separation—this ‘haunting’ as the photographer describes it—is presented at the top and bottom of each image, its perversely voluptuous baroque incarnation drawing attention to the centrality of that supposedly supplementary, or secondary, ‘outside’.

As with WHEREAREYOUFRO, what is present is always incomplete. This is the source of photography’s ostranenie (the Russian Formalist notion of ‘making strange’) and the verfremdungseffekt (the Brechtian ‘alienation effect’), that stranger effect through which the inside which we thought we knew so well is invaded, subverted and illuminated by an outside.