I recently rediscovered the classic book, Camera Indica, in which I found an expression that, surprisingly, resonated with the current thematic of PIX. In the very first lines, visual anthropologist Christopher Pinney charts his endeavour as an attempt to fathom the ‘complex changing ecology of photography.’ As this book is subtitled as ‘The Social Life of Indian Photographs,’ his motives begin to unravel. The author attempts to study the plausible interactions between photographs against their environment(s) or social and cultural landscapes.

Whereas the anthropological and sociological outlook on photography would deploy the classificatory tools of ‘description’ and ‘analysis’, an ‘ecological’ viewpoint would be more prescriptive and normative. The word ‘ecology’ itself bears that ambivalence—a study of the relationship between organisms and their physical surroundings also encompasses an ecological, political movement seeking to protect the environment. At a time when many practitioners and commentators predict the looming death of photography, it might be advisable to re-infuse the medium with a sense of purpose and renewed meaning.

The main question that arises then is the one of the responsibility of the photographer to add new images in a world which is otherwise decried as visually inundated. As artists, how can our practice be beneficial to an environment of photography which is witnessing this abrupt exponential growth? How do we avoid polluting and adding to the noise of the billions of pictures uploaded everyday on the web? The ‘digital age’ is often pointed out as the main proponent of this inundation, though it was even before this major technological shift that Susan Sontag lamented the over-consumption of photographs, ending her famous essay with a plea for an ‘ecology of images.’ One could thus answer her cautionary message by conceiving the photographic realm as an ecosystem, that is, a community of living and non-living organisms resting primarily on diversity, sustainability and preservation. The function of the photographer would be central to this system, embodying parallel and overlapping existences—on the one hand, as a photographer-author, producing original work, re-investigating dominant narratives and mainstream visual lexicons; on the other, as a photographer-editor, appropriating existing material (primarily his/her own) and giving it new life through the art of montage.

While the former figure as a kind of political and poetic avant-garde symbol would appear to manifest a modernist understanding of the role of the artist—a unique voice standing out from the hubbub—the latter places the photographer in a less instinctive territory, where the crucial act becomes more about choosing than creating, about archiving, researching and curating. It is from this perspective that one has to acknowledge ‘From Here On’, a manifesto of the Rencontres d’Arles, 2011 edition—as a desire to filtrate, recycle and selectively but carefully preserve that constant flux of visuals. This document not only sets the conceptual underpinnings of a new trend of contemporary photographic practices (which gained popularity first through the Google Street View projects of Michael Wolf and Jon Rafman), but it also impulsively acts as a reminder for the photographer-author that his or her work is only halfway done after shooting. It is a truism that the illiterate of our times is the one who cannot read images. ‘But must we not also count as illiterate the photographer who cannot read his own pictures?’ Benjamin subtly adds in his Short History of Photography. Earlier in the text, Benjamin quotes an interesting comparison between different instruments of visual art and those of music. While the painter’s stroke would be closer to the violinist’s ‘creat[ing]’ of his or her note, the photographer’s ‘clicking’ would rather resemble the motion of a pianist, who simply ‘strikes’ the key to produce a note. This analogy can then encourage us to imagine a photographic series as a musical composition—a careful combination of rhythm, melody and timbre unfolding in time. In this way, the photographer becomes a composer. Which means that, even though it is essential for any artist to share his work, specifically in order to see if the message gets conveyed and to avoid overt self-references and artistic solipsism, in the end a photographer can also be his or her own (and last) editor.

For this reason, I would also like to define the activity of photography in today’s visual ecosystem as something close to ‘sampling chaos.’ Be it methodical cataloging or a serendipitous choice, from some archives of the past century to today’s Flickr, or even, in a stricter sense, from the tumult of the real, as Paul Graham states about images ‘when you dance with life itself—when you form the meaningless world into photographs, then form those photographs into a meaningful world.’ In spite of a dialectical process of producing and editing images by the photographer, what Sontag feared was that the viewer had been lost along the way. Perhaps the inundation of pictures can destroy the dykes of assimilation, and yield a de-sensitised, numbed spectator. She writes, ‘Cameras are the antidote and the disease, a means of appropriating reality and a means of making it obsolete.’ Taking a lead from the literary icon, recent studies in psychology have revealed that our ability to  remember an event or a moment is actually impaired by our propensity to take pictures of it. This comes as a caustic epilogue to Sontag’s warning about the shifting power of photography in todays practice oriented setting. 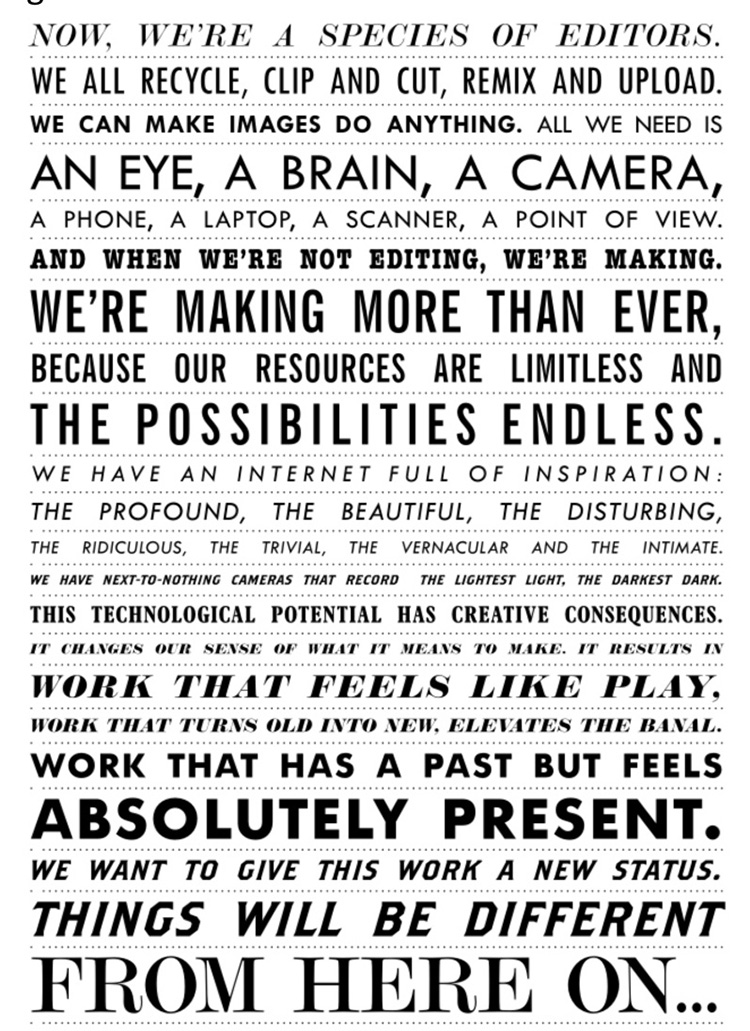