The Sanity of Habitation

The ‘home’ is a siting for human habitation. The ‘home’ is often seen as the safe inside in a landscape that is public, urban, and in may ways unprotected; however the tropes by which we reproduce the imagination, at times the illusion of home, even if imaginary and incoherent to the normative definition within the landscape of habitation, is the very locus for charting lives in the terrain of an incomprehensible civilisation. The home is not private space as always imagined, but a site where the human habitation shapes up to living and breathing, generating a constellation of sorts, one that is not yet measured, or classified in all its depths and details. Habitation is a geography of ‘insides’; a labyrinth of interiors where we enter sparingly and only on few occasions, but we often imagine that the few interiors we know and see and experience are what all interiors in civilisation and human lives are about—this is a false condition of knowing. 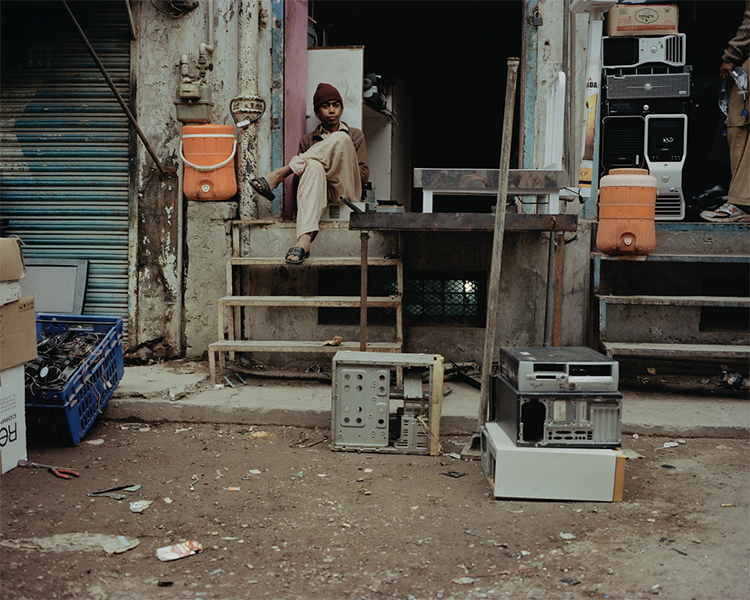 From the series Bit Rot Project by Valentino Bellini. The average pay of an electric waste disposal worker in the suburbs of Old Seelampur in New Delhi is aboutINR 2-3 thousand per month. March, 2013

We do not know the city, as long as we do not know the homes that build it, make it, and produce it! The home is a civilisation-producing sliver for the collation of human needs to group and reproduce the individual. The home unfolds in the landscape of habitation, the home connects with uncharted space of nature; for the home to withdraw is for civilisation to disintegrate. The often-imagined binary—inside/outside or private/public, in the discourse around the home and the city/civilisation is a mis-calculation of how we understand geographies of human existence and the spaces of human occupation. Human civilisation lives in its large plethora of homes as much as it grows and breathes in its streets and monuments. To imagine nature or monuments as carved out and protected exclusively for particular forms of consumption and activities is a way of segregating the landscape of civilisation unnaturally; the dwelling of a migrant sex worker in the marshy grassland and the monument to death and love are all the continuous terrain of life-activities. The home is often imagined as a space of familiarity, while the world outside is a collection of strangers. The home is not a unit defined on a planner’s log book or the realtor’s dream book,but the niche of sanity you hope to carve out in a landscape of incomprehensibility and a crowd of strangers. The conception of home as a primary unit, a basic unit that multiplies to develop the city, is a misreading of the relationship that individual lives share with the history of civilisation, and habitats that are prepared stages of production.

The monumentality of civilisation and the production of its habitation on earth is often the interesting view-terrain. The aerial view of comprehension distances the terrain of habitation. The city is crawling, brightly lit, an apparent geometry of built and un-built spaces and objects,a map you often see on paper—is up for ‘viewing only’ in the zooming aeriel view—it is the ‘object’ of beauty and disgust. It is there only as a view, not a terrain you walk and breathe in, negotiate and live through. Habitation is distanced as much as the home encloses within itself. In the city, the window is now only an opening, not an umbilical extension into the city. The rising tower in the city distances through compounds and gateways—not gateways that announce entry, but those that deny the continuity of habitation. The highrise compound in its attempt at being ‘safe’ (read sanitised against the corrupt and polluted city) and secure, self-sufficient (refusing to interact with the street) distances the home from the city not just through height, but by the architecture of a psychology that refuses the ground as a space for life-activities and as a level for engendering distance. As the height rises, the ground disintegrates—as the home secures itself, the city crumbles, it disintegrates! The landscape of habitation produces a self-image that divorces the slivers and clusters, the make-shifts of civilization that are indeed the ingredients of a tumultuous terrain in which history and lives imagine and hope to find a stable residence. 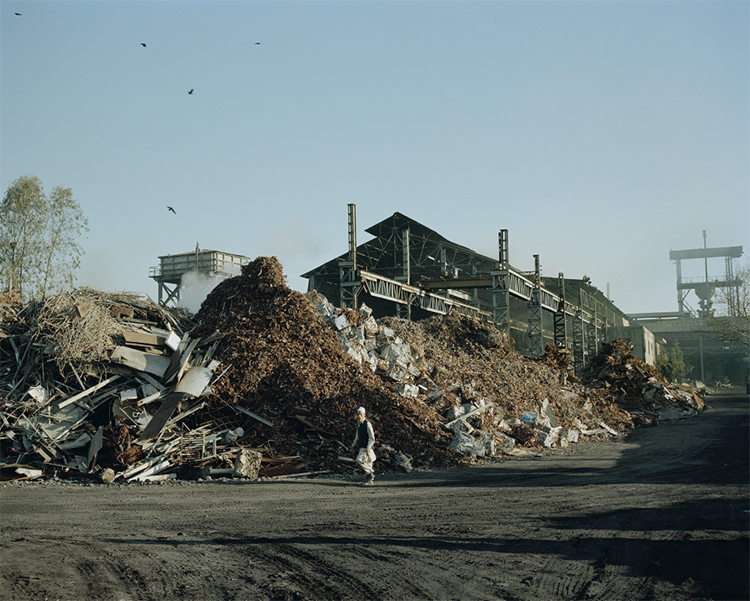 If the landscape of habitation drawn out by human lives and endeavours is a labyrinth of ‘insides’, then what would its map as a labyrinth of ‘insides’ look like? Can we draw a map of human habitats collecting and measuring all the interiors and their flows? How many insides will we find exposed to the outside, undefined in any enclosure or shell whatsoever? Every inside may be a labyrinth of rooms and spaces, stairways and corridors, but every inside is also the cauldron exposed to human life and the incomprehensibility and vagaries of civilisation. The inside geography at some point fuses into, and becomes part of the exterior terrain of spaces in the geography of habitation. The terrain of living is opened inside-out in this map of interior spaces—the home, the whorehouse, the gay bar, the public toilet, the hidden smoke joint, the gambler’s corner, the shanty on the urban outskirts, cooking for a household in the nook of a pavement, and the neighbourhood by night. In civilised imaginations of habitations, sanity is maintained in the order of public and private, inside and outside, home and the street—with all binaries accorded their protocols of behaviour and existence. But, what we see by day is only a veil for what unfolds in the night; what the outside tells us is only a story that hides the insides, filled with lives that are denied an everyday existence, often ‘insides’ that can only wish for an interiority. This everyday struggle between ‘home’ and the production of civilisation creates habitats and accommodations that are repositories of disgust, denial and repulsion. The insecure outside, the flamboyant agora, cannot manage the inside that challenges the sanctity of a governed public. The inside (or the inside denied its interiority) reveals an anxious civilisation, one that is either too exposed or too hidden, one that struggles with an understanding of life that cannot accommodate any garb of vanity and sanity. 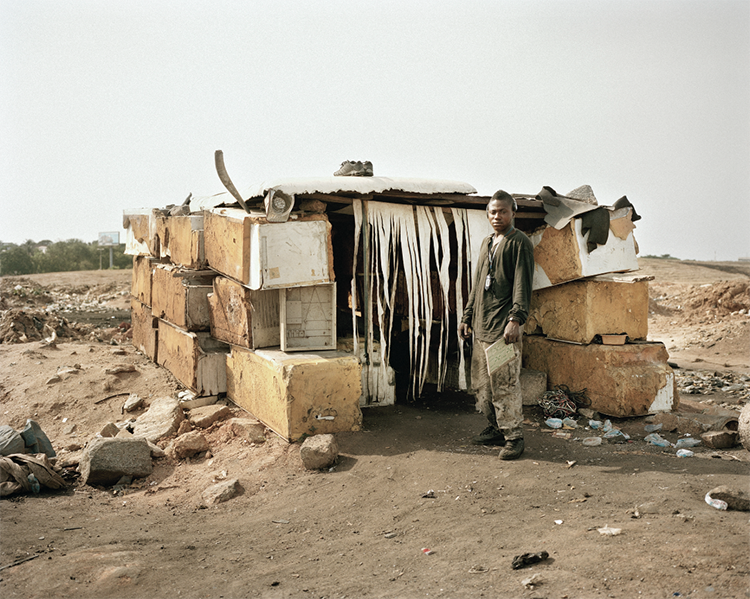 One of the young boys working in Agbobloshie in Accra (Ghana) made the landfill his home; he has built a shelter made of  different types of scraps and waste. April, 2012