The massive earthquake that struck eastern Japan on 11th March 2011 brought about large scale destruction. The Tohoku region was at the centre of this tragedy. More than eighteen thousand people lost their lives or went missing as a consequence and more than four hundred thousand people were forced to evacuate and seek refuge. These conditions filtered out to the world through photographs and other visuals that were provided by the media, some shot in the immediate aftermath while others were taken on handheld devices as the tragedy unfolded. In such an extraordinary circumstance, people were reminded once again of nature’s immense power —the helplessness of man as it were, yet also the resilience and strength of the Tohoku inhabitants — hence ironically, as a whole, the gamut of images were of devastation and hope.

We are living in an era of rapid change—though the change may not always be for the best nor refer solely to technological advancement. It may infact highlight social structures, daily customs, cultural values and ecological transformations. Such changes are often beyond the control of a single individual—some of them may belong to the realm of the sub-conscious or be engineered by nature. At the heart of such a cultural evolution is need for reflection and the ability to recover that which gets lost along the way.

It has been two years since the Great East Japan Earthquake and the current issue of PIX marks its anniversary as a moment of remembrance or a metaphor for gauging the often incongruous meanings that people and practitioners invest in images of reconciliation or restoration. Responding to the theme of “Recovery”, twelve photographers have captured moments that affected them and have tried to portray how one can and does face situations in which the image becomes a poignant, sensory document. My understanding of the selections are such that they do not merely portray and evaluate changes, but present them as traces and patterns of reliving incidents so that the viewers themselves can start thinking about the unintended meanings of images and their ability to educate and mesmerise us.

In keeping with the nature of collaborating and seeking a dialogue, this endeavour too is enmeshed with the collective support of photographers and writers—those who take images and who manage to bring ideas to life, to keep people and spaces alive through memory. The Japan Foundation would also like to use this opportunity to express its deepest gratitude towards the people from around the world who have provided support, physically, monetarily and culturally for the victims of the earthquake, as the world will always find a way to heal itself as long as we think of the collective identity of humanity itself. 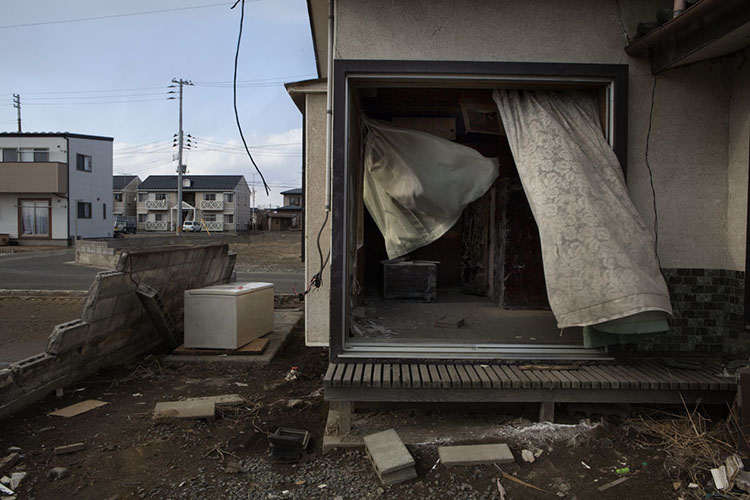 Paolo Patrizi, from the series Limbo A house in Ishinomaki where many lives were lost. Tohoku, Japan, 2011