There is a long, rich and interconnected history of visual arts in Afghanistan. The monumental statues of Buddha in Bamiyan constructed in the 2nd century A.D. during the reign of Kinishka, a powerful king of the Kushan Empire (60 – 375 A.D.) were a symbol of fortitude if not resilience and tolerance. Photographed by many international photographers, its obliterated remains tell a tale of ignorance, but also that in the many decades of war, not only artistic expression but also a generation of practitioners in Afghanistan have been silenced. Photography as a medium of the public is no exception, but of late there has been a resurgence in the profession, not only as a consequence of international media reporters, but as a tool in the hands of the resident population.

Though the digital age has created an accidental society of photographers, there is historical evidence to confirm that an archive of images existed from the early arrival of the camera. After the pioneering work of British war photographers, William Baker (d.1880) and John Burke (c.1843-1900) in the 19th century, at a more popular level, Afghans began taking photographs in the early 20th century inspired partially by King Amir Habibullah Khan (1901 – 1919) who was not only an avid lensman but a patron as well. Since the first quarter of the 20th century, the role of photography has varied in tandem with different regimes – from a focus on kingdoms and the landscape to communism, civil war, the Taliban, and finally, the current period of rising democracy.

Other significant markers in modern history have also bolstered a change in the course of photography. In 1912, soon after the establishment of Afghanistan’s first newspaper, Seraj-ul Akhbar (Lamp of the News), photographs were consistently featured in the media including personal images by King Amir (mentioned above); photo-documentation by King Zahir Shah during his journeys to the north of Afghanistan eventually aided a French archaeological team to discover the Greco-Bactrian city of Ai-Khanoum. At a socio-cultural level, many have been documenting the work of Afghan box camera photographers (including Lukas Birk and Sean Foley in this issue) which brings to light how there is still a trace of our photo-history that finds its way into the present.

I feel that the gulf in photography came with the Taliban regime (1996-2001). At this time, the medium was deemed a crime under Islamic law and Afghans were forbidden to take pictures or to be seen in photographs. All the newspapers were published without pictures, but the only exception to this rule was the dissemination of ID card portraits for Afghan men, many illuminating examples of which were found by Magnum photographer Thomas Dworzak in Kandahar in 2002. 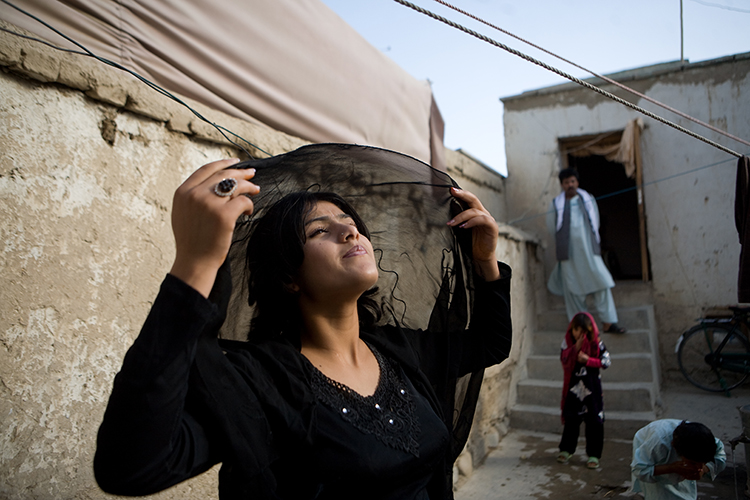 Shahbibi, a young Afghan singer in the yard of her home in Kabul. Photograph by Farzana Wahidy. 2009, Digital

As a consequence of rampant censorship, due to necessity, cameras were carried alongside guns by foreigners who documented war and conflict in the region. In a struggle to capture ground realities, practitioners were usually conscripted to move with international troops. After an almost decade-long struggle, the fall of the Taliban has led subsequently to a flourishing of photography in all its forms, including journalism, documentary work and art practice. Photography collectives and institutes like AINA and 3rd Eye have emerged as a powerful voice, training local photographers who are now known worldwide. In 2012, Massoud Hossaini won the Pulitzer Prize for his picture known as ‘The Girl in Green’ but the greater effect was that it encouraged a number of young professionals to consider photojournalism as an occupation for the first time, a job for which they often remained uncredited. To name a few, Kabir Mokamel, Shamsia Hassani, Lida Abdul, Nasser Fedaee and Rada Akbar are some of the photographers actively working on an international scale in the present day, further abetted by developments in social media and citizen photography – Facebook and Instagram that have become powerful tools of exchange. The journalist Bilal Sarwary started #AfghanistanYouNeverSee campaign to encourage virtually anyone to regularly post photos of Afghan landscape and daily life drawing the attention to other aspects of life in the country.

As photographers, we have no doubt about the arduous path ahead and the challenges we will encounter with every successive decade. The problems persist – varying levels of societal cooperation, a lack of awareness about the importance and role of the media, a weak local and international market presence, continual censorship purported in the guise of maintaining confidentiality, and weak copyright laws. But as the path is hard, we have taken a pledge to work harder.