October and November 2015 could be remembered as months in which photography took hold of the community in India and Nepal. As the Delhi Photo Festival’s engaging series of exhibitions and talks started to simmer down, many participants were already flying to Nepal, curious to discover the first edition of Photo Kathmandu. BIND, a recentlyformed, 5-person photography collective was part of both initiatives, and was given the unique opportunity to inhabit a small room of the Patan Museum in Kathmandu, one of the original royal palaces which currently houses several sacred arts and traditional crafts objects. Here, we decided to engage with an array of old photographs collated and archived by the Nepal Picture Library, a public, virtual resource developed over the last five years by a dedicated team of practitioners.

BIND’s intervention was manifested in the form of an unconventional photo studio where selected archival photographs were projected as backdrops. We presented a pre-selected collection of images to visitors against which their portraits could be taken. The images were truly varied: an aerial shot of Kathmandu, the rooftop of an old house, Patan Durbar Square, BirgunjGhantaghar (clock tower), a rural landscape, a monastery with monks, a tree at Lumbini, a boat on the Bagmati River, among many other vistas, events and situations.

We subsequently asked the visitors a series of biographical and interpretive questions: Why did you choose this image? What does this image remind you of? Does this image revive a personal memory?

It was intriguing to hear their responses. For some of them, it was not just about having theirphotograph taken but rather, an expression of their alignment to history addressing direct, tangential and parallel linkages. At times, the link was very personal – “Before my grandmother was wedded at the age of 7, her mother told her that if she doesn’t want to get married she should jump into the river!”

On the other hand, the contextualisation was sometimes anchored in a more immediate and social reality. The old image of the Birgunj Ghantaghar, for example, became a starting point to talk about the current crisis at the Indian border and the blockade by India, the shortage of medicine, fuel and food, and the inconvenience caused in daily activities. 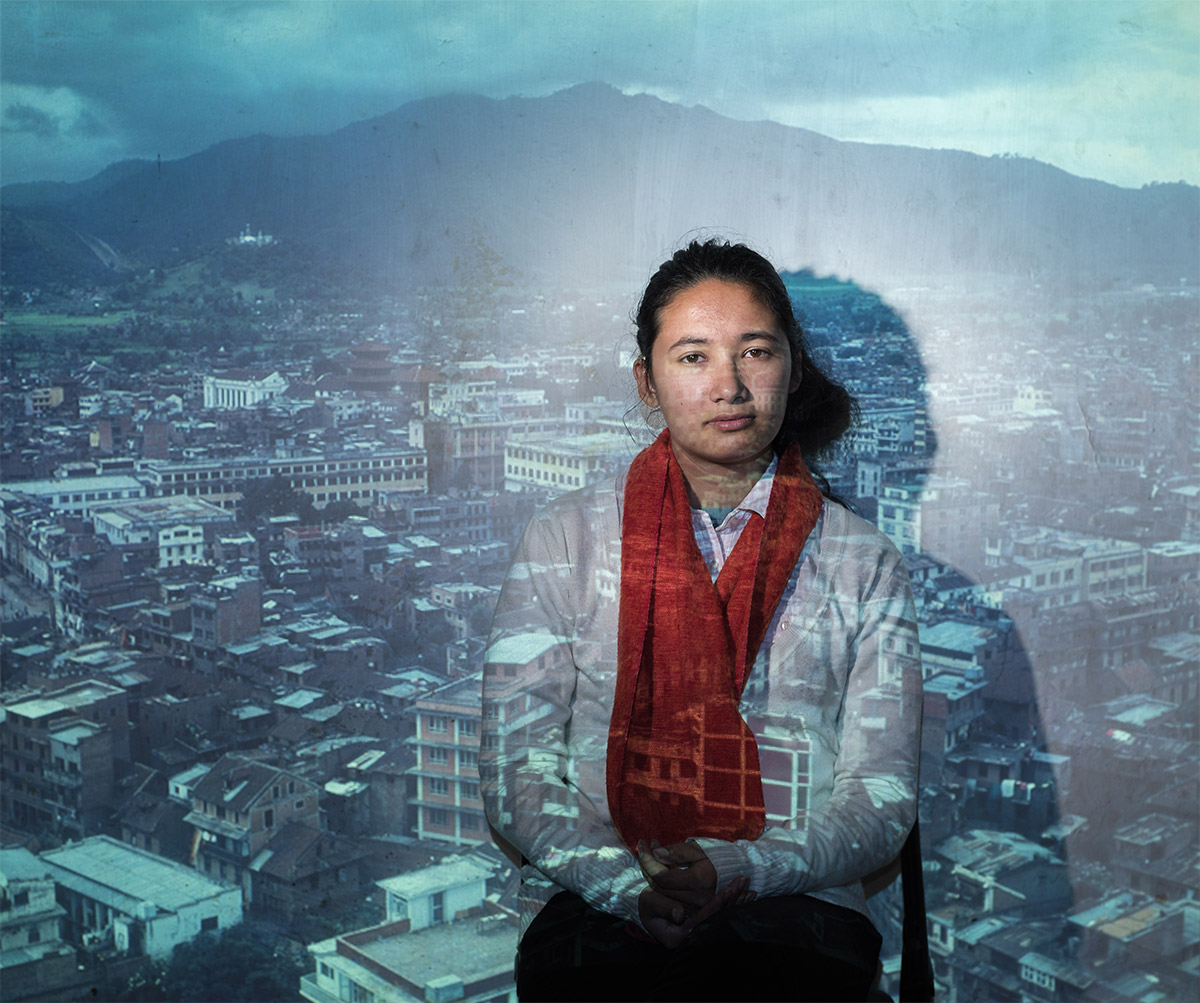 Backdrop image: Mukunda Bahadur Shrestha Collection. Image taken from Dharahara also known as Bhimsen Tower, which was destroyed by the April Earthquake. The photograph shows the Kathmandu Durbar Square and surrounding. Estimated to be from the 1970’s

Some visitors also expressed longing for a certain pastoral lifestyle, seeing the archival photograph as a projection of one of their school drawings, in which they could magically sit for a moment by the river, surrounded by the ‘perfect’ house and the ‘perfect’ tree. “If you get to stand in front of the picture, are you a part of it?” asked a young man.

Backdrop image: Amrit Bahadur Chitrakar Collection. Image of Patan Durbar Square facing South. The two patis (public spaces) of Mangahiti on the left of the photograph were brought down by the April Earthquake. Estimated to be from the 1990’s

Later that afternoon, a young woman walked into the space. She paused briefly before picking up a photograph from the assembly placed on the table –of a little girl standing on a rooftop. “This is my mother!” she said, smiling. A photographer by the name of Juju Bhai Dhakwa who used to be their neighbour, had taken this image. Remarkably, she had never seen what her mother looked like as a child, as the oldest photo she could remember was taken just before her marriage. She explained that for her, having this photo used as a backdrop was like ‘entering’ her mother’s childhood. “I looked exactly like my mother when I was the same age.”

A slew of stories then began to form around our experiment in Patan Museum, where the unexpected became part of a curatorial exercise. Patan Square brought forth a lot of memories – spending time with friends, or passing through the square on the way to school. Some spoke about the cultural significance of the rituals or festivals that took place and expressed their sadness at passing through this place after the earthquake, given that a temple they used to visit before didn’t exist anymore. 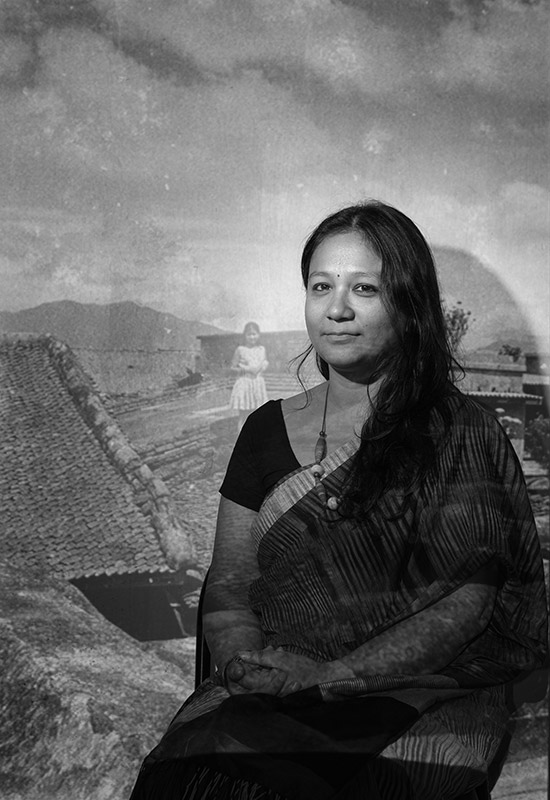 Backdrop image: Juju Bhai Dhakwa Collection. Image from his home in Patan. Estimated to be from the 1960’s / 70’s