The Purveyor Of Truths

The portrait, whether painted by an artist or shot by a photographer, has always been an effort to momentarily capture in that instant; more than what meets the eye. The act of making the portrait – the interaction that precedes the final image captured on film – is a calculated attempt engineered by the photographer at seeking out the true personality of the subject. However, many also believe that some of the most successful portraits are those that ‘capture the soul of the subject’, attempting to expose a hidden likeness.

Accordingly, when I look at the portraits of the hijra or eunuch community in Lahore created by Malcolm Hutcheson, I can’t help but envision the process leading up to making of the final image. The photographer carefully orchestrates the interaction between himself and the subject by controlling every aspect of encounter so as to condition and temper the visualised space – ranging from the ambience, the choice of medium, to, imaginably, the preceding conversation. Does the subject readily decode his ‘imaging’ process and thus choose to put on a performance for camera? Is the portrait what the subject wants to show the audience, and less about what the photographer wants them to reveal?

The hijra community by their very profession in the present function as performers – be it at wedding ceremonies, as alms seekers on the road or as dancers. Hutcheson’s photographs are testimony to this aspect of their performative selves as he asked them to pose in whichever way they wished, leaving several decisions about the image-making process, actively in the hands of the subject, and by affording himself the distance of an observer. By virtue of his choice of medium, the Ruh Khitch camera –a cumbersome analog device in which the negative is developed at the time of the exposure – the subject has to remain motionless for at least one to three seconds. This extended time period plausibly enables the subject with an added intensity of feeling stretched over time in their performance, which is evident in the portrait of Madam Rakho and Bubbli – one hand on Rakho’s hip, the other hand in Bubbli’s hair, the covetous tongue issues as if preceding a passionate kiss and the hair – disheveled and standing upright – signifying an electric, sensuous connection between the two partners. This portrait makes the viewer question whether their relationship is an act for the camera, or a glimpse into the intimacy shared between these two individuals. They seem unaware of the camera and Hutcheson’s presence as a photographer is virtually invisible though perhaps such an overt enactment is the result of the photographer’s persona as an active voyeur. My curiosity extends to whether their impassioned embrace, signified by the near clenching of the hands on the hip, led to another level of passionate exchange once the portrait was taken? 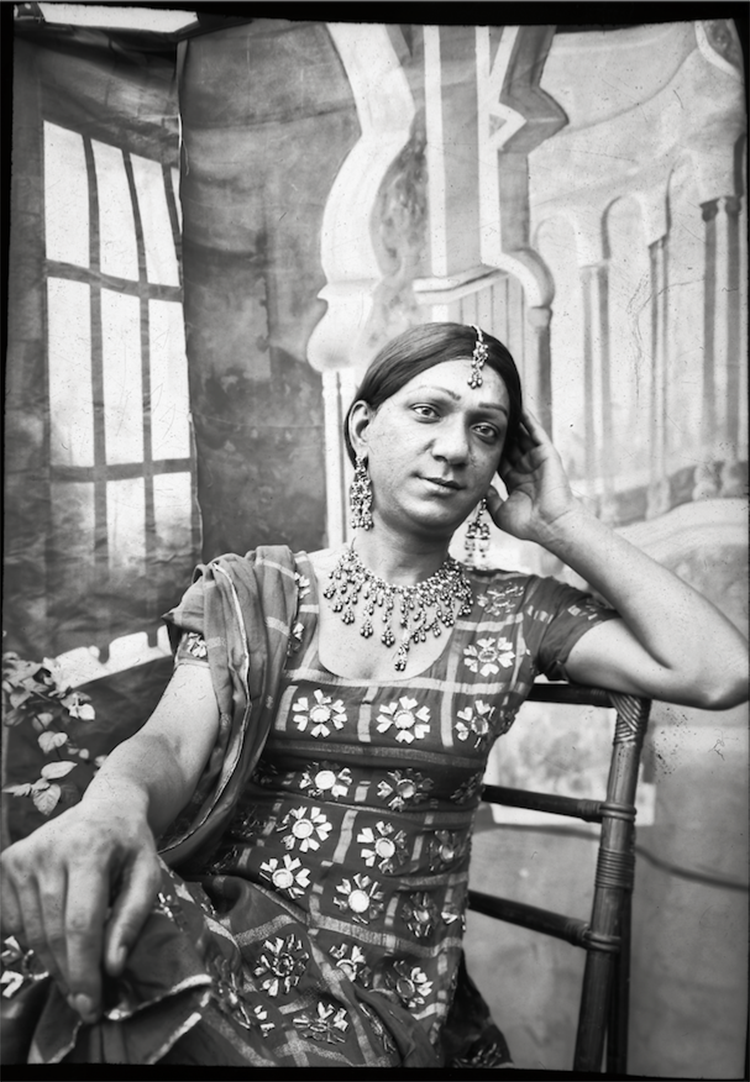 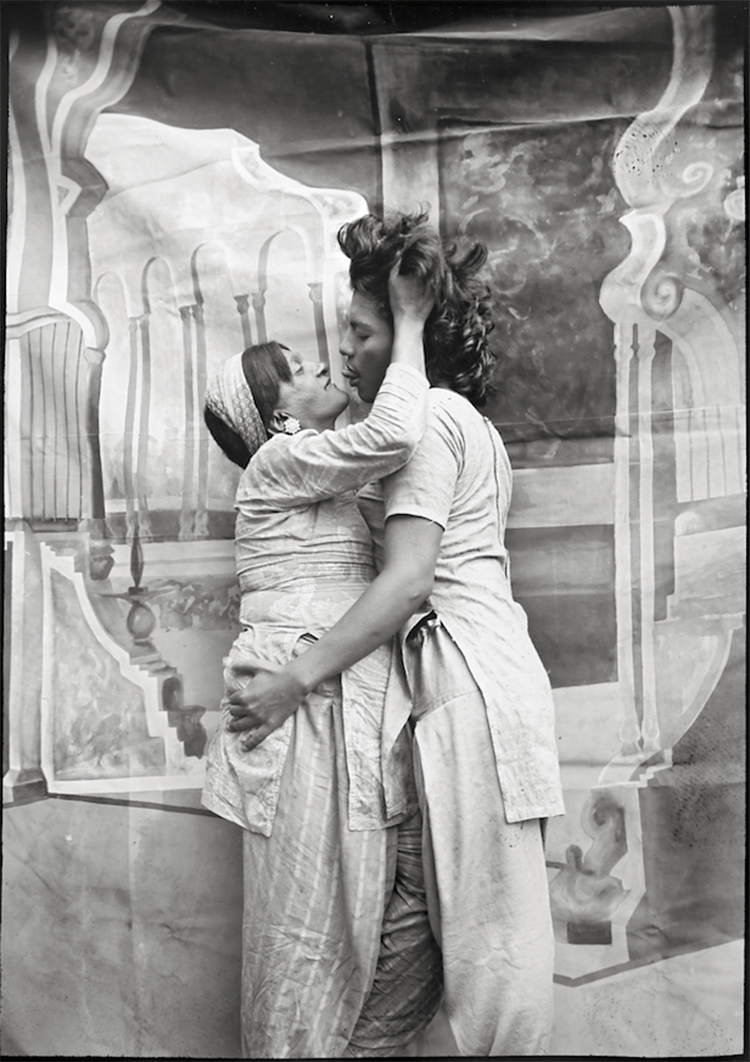 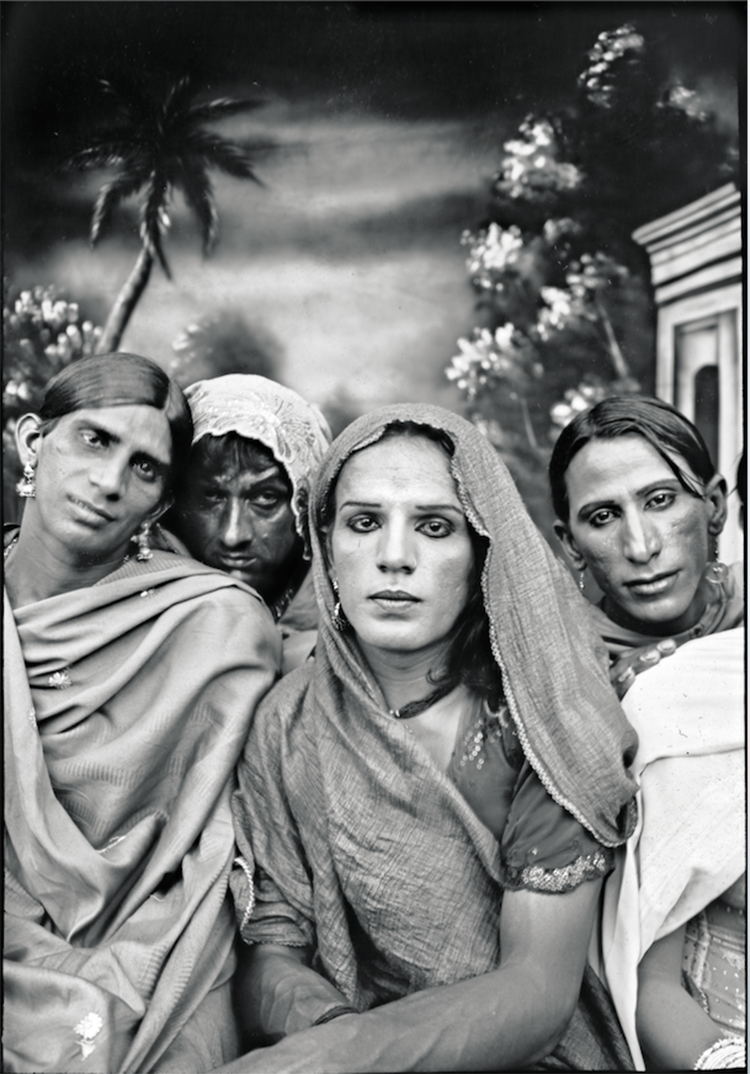 To my mind, the images, though a studio documentation of the transgenders and transvestites, go beyond an objective survey of the subject. The decision to have the subjects staring directly into the camera signifies an inner confidence, dignity, boldness and frontality that the photographer chooses to accentuate. In the portrait titled Shezadi, Benazir, Sapna and Amrita, the central figure appears to be the main subject of interrogation. It is as if the others fulfill the purpose of ‘setting the stage’, emphasised by the backdrop, fully aware of the photographer’s presence. However, at a humanist level, the main protagonist – Sapna – even though looking directly at Malcom, seems to bare open the prejudice borne against her, craving a life of respect. Perhaps this is when the photographer becomes a genuine confidante, a bearer of secrets and an active agent for illuminating hidden truths.