The ledger of images presented here is bound by the norms, boundaries and paradoxes that underlie works produced in an environment of uncertainty. There is a calculated depiction of halfway spaces, intermixed cultures, fragmented identities and forlorn people wandering in a world of chaos, trying to grapple with their condition as subjects with equal rights. Uneasy with the predicaments that prevail, they act from the periphery, relentless in their pursuit of integration, trying to undo the vagaries of their sequestered lives, and the recklessness of the social, economic, political and cultural predicament. In this labyrinth of dreams and divisions, we in Iran try to find meaning and sustenance in a time of crisis and calamity.

The works of these selected artists mark a situation mired by forces pulling in opposite directions – they animate the legitimate anxieties of a contemporary generation, the depth of their distresses – yet also show the capacity of a people to outlive their fears and embrace their ideologies and hopes. In a metaphorical sense, they pass from the exterior to the interior, from a public miasma to a private universe. In doing so, the photographers expose the international viewer to hidden tensions emanating from the interior, and hence, to the duality embraced by those living within. They are constrained to hide the truth – that they cannot voice their demands freely – and must learn to live within the invisible confines of the state, or bear its consequences.

However, in an effort to prevail against the odds, the artist once again becomes entangled in a power-play, one that needs more time to galvanize a resistance in order to have a cumulative effect on the system as a whole. The resistance becomes a performance act, a satirical situation wherein to show what he sees and to say what he wants, the artist stammers, trying to communicate within an ambiguous show-and tell. In an effort to surmount the stereotypes created of themselves they fall into the same trap, another stereotype of the artist struggling against the odds. It is a complicated and double entendre situation that leaves the artist in the shaky hands of binaries and tensions: subject with object, viewer with viewed, finished and fragmentary, right or wrong.

This is how the collection of photos and text come together to unanimously articulate how the vagaries of politics are also layered with contradictions; a narrative emerging from the labyrinth of paradoxes, and perhaps an allegory to the infinite structures of coercion that lead us in a spiral of incidents and accidents. Here again, the photographer strives to escape the cyclical ways and trappings of the world, but manages invariably to explore its depths further and further. To make sense of the labyrinth, one must confront the disorder. 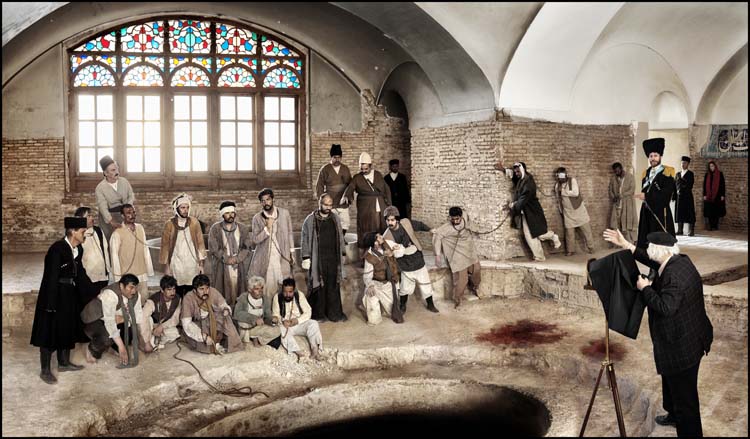