Beyond Borders: A Photographer’s Thoughts

Before I begin working with the images in this issue, I was brought to bear on the idea of the theme itself. I was confronted with images of open fields mysteriously cordoned off, wires with razor sharp barbs preventing the encroacher who dared enter and gain access to a secret, other world. When I think again, it may be a different image with a different field and a different intruder, but there are always boundaries. Trespass itself subsumes a violation of some sort – a usurper, an intervention, the need to breach and break those very barriers that the needle-like barbs stand for.

In this issue of PIX, the photographers have gone far and wide on this very interpretation. Chandan Gomes’ work focuses on the nature of infringement on one’s living space by inanimate objects. Here the violator isn’t even a living object; the boundaries are not so sharp. Somehow, the various layers of his life simultaneously coexist to form a working tandem. In his scenario, this defiance of conventional boundaries creates a sense of equality, an uneasy cohesiveness, an adroit sense of social disharmony. The result is a strangely functional world created by a sense of discomfort.

In Jaimin Bhavasar’s work the open field represents an opportunity, surrounded though it is by a barrier of circumstance. Lost Life speaks about the way in which the violation of innocence and opportunity is a kind of obstruction to and of identity. In his work, every photograph tells a different tale—the child who lost out on an education or the woman who was forced into an unhealthy livelihood by virtue of employment in the waste disposal industry. 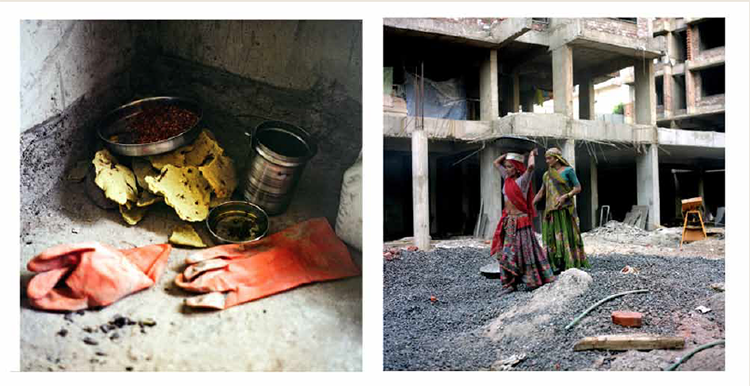 It’s interesting how the same term takes a completely different perspective in Siddhartha Hajra’s Opera Monorama, where the photographer interprets the premise as a sort of movement between two versions of the self. He shows the viewer how performance can and does alter the perception of transsexuality, and in Monorama’s case, perhaps allows him to better understand both versions of him/herself. He pertinently raises the issue of gendered identity, and how these at times morph into one another. Here those barbs on the wire are society’s gauge of acceptance.

To ‘trespass’ is also to transform. Mark Esplin juxtaposes India’s ever transforming ‘urban’ landscape with the ‘makers’ of this progress. His series makes one wonder whether these faces are able to benefit from this transformation and break free or are they destined to be viewed as trespassers themselves?

Devansh Jhaveri ominously hints at the transient nature of mortality. He paints this sin city-like picture of Varanasi, where life and death coexist in the same space, making a crossover into the afterworld eerily routine. The body breaks free of its own life, moving into another space of existence or absence. Where Devansh makes a relative comparison of the two worlds as life and death, Aparna Jayakumar toys with the idea of an alternate reality that is fictional. The otherworld is not death, but just an artificial construct. Her images of a film set raises questions of the real visa-vis the imaginary, and how easy is it to transition from one to the other?

Going by the vast interpretations of the theme, Surendra Lawoti in the Special Feature section on the Don River, brings out the inherent connection between man’s relationship with nature and development. One may be able to break the conventional barriers and inhabit spaces that may not ordinarily lend themselves to habitation, but in doing so, how much is he being controlled by nature? What are the considerations of a marginalised community trying to break away from the norms of living that are acceptable to most?

To end, Timothy’s Hill’s series titled Borders takes me back to where I started. When I attempt to visualise the notion of ‘trespass’, the encroacher and space might be changing but in every scenario, boundaries are the only constant. He pointedly looks at these boundaries on a macro level through Google map images taken over the Indo-Pak border. Looking at this graphic series, one is forced to ask the question—would the notion of ‘trespass’ exist if there were no visible or symbolic barriers?