Living in the Mist – the Last Nomads of Nepal

“He only earns his freedom and existence who daily conquers them anew.”

The Rautes are an endangered nomadic group in Nepal who move around in the western Himalayas of the country. They can be identified in isolated nooks and corners of forestlands, clad in roughly knotted pieces of cloth. With their own language known as Raute or Khamci, meaning “our talk”, they have chosen to remain foragers and do not assimilate into the surrounding farming population. Nobody really knew about these hunter-gatherers until recently when Nepal Television aired a documentary made on them a few years

ago. When American anthropologist, Johan Reinhard conducted an ethnographic study in 1969 among Rautes and the Raji (a related ethnic group of largely settled agriculturists), their population was estimated to about 650 persons living in small settlements in the Karnali and Makahali (Kali) watershed regions of western Nepal. However, there are only about 125 of them left today.

Hunting monkeys is one of the fundamental activities of the Rautes. Monkeys are considered to be offerings from God. The Rautes have a unique technique where 8-30 young and middle aged Rautes males hunt in a group. They set a perimeter in the forest, and then, making an unusual sound, confuse the monkeys who descend from the trees and get trapped. Monkeys are the only wild animals hunted by Rautes as killing other species is considered a sin amongst them. Rautes barter hand carved wooden vessels and utensils with different crops in the nearby villages. They are known to use traditional tools like axes, adzes and chisels and do not use any kind of modern tools. The livelihood of the Rautes is directly linked with the wooden vessels they make, as they neither engage themselves in agriculture nor do they wander in the city for lucrative jobs.

Their supreme God is Berh (Sun God) apart from various forces of nature they worship. Interestingly, Berh is also the supreme God for the East Indian tribes of Kharia and Birhor. But Forests are an integral part of the Raute life. Forests take care of them from birth to death, providing them with wood as a means for their livelihood and monkeys as their food. Rautes believe that a longer stay in a particular place will contribute to deforestation. Hence they shift from place to place and live from about one week to one month in a particular place. Nomadic behaviour has become increasingly rare in industrialised countries. The Rautes have refused to accept the ‘citizenship’ of any formal society or state over the centuries. Frozen in time and space, almost unaware of the rapid changes in the outside world, with a poor economic condition and a high mortality rate, the question is: how many generations will be able to witness their existence?

From the series Living in the Mist – the Last Nomads of Nepal July-August 2011, Nepal Digital 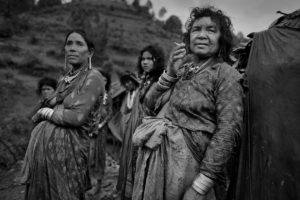 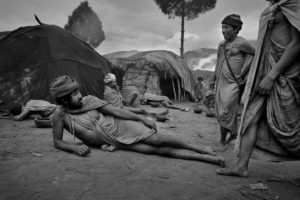 A Raute moving towards his destination. Rautes who are in the verge of extinction, have their future completely uncertain.