For the past two years, my photographic work has focussed on the development and consequences of the abuse of pharmaceutical drugs on ‘users’. After I finished working on the first part, “Death for 50 Rupees”, I wanted to shift my focus off the street and document the life of a single person addicted to injecting pharmaceutical drugs. The outcome of this continuing story is called “Phas Gaya – Being Stuck” and documents the life of an addict named Fakir and his family, trying to conquer his addiction and live a normal life.

All images from the series Phas Gaya – Being Stuck Delhi 2011 (ongoing), Digital 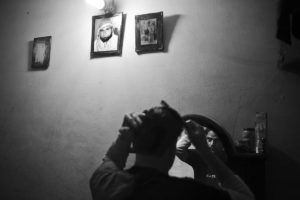 Fakir stands in front of a mirror while a picture of him, taken years before, can be mounted to a wall of his room. Fakir, now 30 years old, went to a few rehabs from 2002 onwards till the last dating back to the end of 2011. Back then he was addicted to smoking heroin and still with the support of his mother trying to change her youngest son’s life to better. She died 6 years ago and left a vacuum in Fakir’s life.

Fakir prepares for one of his daily injections. “Since my mother died everything has changed to the worse. If it wasn’t for my two small children, I would have committed suicide a long time ago. This damn medicine…”, told me Fakir, crying about his loss and life, sitting lonely in his small room of the family’s house.

After injecting Fakir helps his 3 year old daughter Mania putting on her trousers. The piece of cloth which entangles his arm tight, making the injecting easier for him, seemed like an allegory for his life, a life in stagnation, being stuck – Phas Gaya. 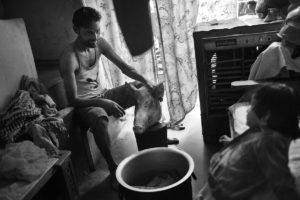 Fakir is holding a pork head which he is about to chop into pieces that later will be cooked and fried. The little money that his roadside food stall, offering fried pork, generates is just enough to keep his family running. 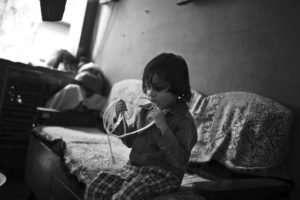 Mania, Fakirs daughter, plays with a plastic tube that her father uses as a tool for injecting. The prescription-only drugs used for injecting can be bought from almost any pharmacy around the corner as easily as they were cough syrup. 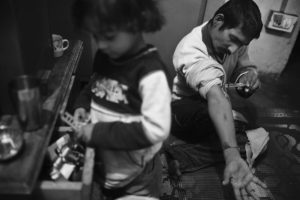 Pakori, an acquaintance, injects while Fakir’s daughter searches for something in the cupboard drawer. Pakori helped Fakir for some time running the road side food stall. Yet this and most other relationships are based on their addiction and Fakir is constantly deceived by false friends. 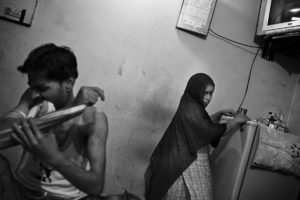 In preparation of the injection Fakir wraps a piece of cloth tight around his arm, his wife watching him. She knows about her husband’s problems yet she doesn’t dare to interfere. Multiple times a day he injects a mix of a strong synthetic opioid plus an antihistamine that alongside a syringe and two needles is sold for 40 Indian Rupees (about 0.75 USD).

Fakir wraps a shawl around his neck a few days after he had been released from local detox/rehab center. After many months of abuse and the constantly worsening family situation Fakir had been forced to attend a 40 day rehab program for addicts. This new kind of drug abuse is not only constantly increasing but also effecting people from various social and cultural backgrounds. 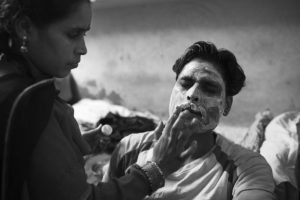 In preparation of a celebration Fakirs wife applies a bleaching crème at her husband’s face. Except the support of his wife and her family there is almost no one that he could share his worries with.

His wife gives money to her husband after he complained about toothache and so asked to buy some medicine. 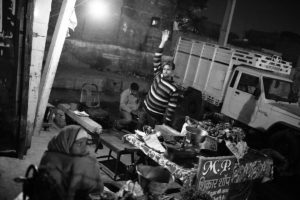 For the first time after leaving the rehab Fakir has opened his roadside food stall, offering fried pork, again. The frustration about the mostly bad running business that generates is just enough to keep his family running is a constant in his life. Yet he doesn’t want to take on any other work since he says that he enjoys being his own boss, spending the day working on his own and talking to customers who visit his shop for a quick snack. 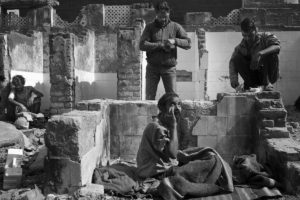 Fakir is standing on top of a run-down public toilet house that many of the homeless addicts of the area use as a place for injecting or as a shelter for the night. After the rehab and a few days of confidence to overcome his addition, Fakir is again injecting daily. Since his family isn’t aware of this fact he doesn’t inject at home or in front of his children anymore but prefers to quench his addiction in more hidden places where other addicts meet.

Fakir holds his son Paras in his arms who got injured as he fell on a brick. Fakir and his wife got into a bad argument since Fakir was supposed to look for his son while his wife was taking care about the household. I would like to tell something different but what the future holds for Fakir I don’t know. I hope he is going to try whatever he can to make life for his children, wife, and eventually for him better, overcoming the ups and downs of life which all of us have to face. 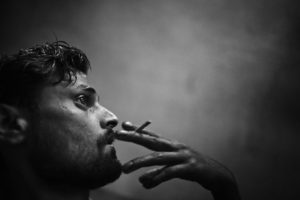 After injecting, Fakir watches television while smoking a local cigarette. Since more than two years now Fakir is addicted to pharmaceuticals.