On 30th March 2011, the day India took on Pakistan in the World Cup semifinal, Section 144 was imposed in downtown Srinagar; a group of four or more friends/strangers could not watch the match at a roadside chai shop or listen to it on the radio without being on the wrong side of the law. They could even get arrested. Bursting crackers was banned, celebrations would not be allowed. The freedom to watch a game of cricket is hardly something that one cherishes. But even that needs to be fought for sometimes. Thankfully, there were enough who decided to defy the order and watch the match and burst crackers, out on the streets.

There is a moment somewhere in the run-up to the fourth ball of the over when fast-bowling ceases to be part of the game and becomes, like the desire for freedom, its own reason. Hussian, the seventeen-year-old stone-pelter, whose final punishment was to play in the Kashmir Premiership League organised by the same Indian military apparatus which was the most visible symbol of occupation and had been the subject of his stones until recently, had used the ball like he would a stone for more than a month, hitting the target regularly, waiting for his chance. The opportunity had finally arrived in the form of an exhibition match between his team, the winners of the Premiership League, and a Soldiers’ Eleven. Hussian had inherited the passion for fastbowling from his grandfather, who had been a great fan of the Pakistani cricket team. He had held that the fact that India produced great batsmen while Pakistan produced legendary fastbowlers was not a random one; it was intimately linked to the destinies of the two countries and the balance of power between them. To him cricket, like the world, was a batsman’s game.

The spectators wanted fours and sixes and a fast bowler’s greatest triumph was also the end of the entertainment for them. The batsmen went into the field confident and business-like. They only had to conserve their power and preserve their destiny. The fast bowlers, on the other hand, had to summon every last reserve of energy in their blood to earn salvation on the field. For Hussian’s grandfather, Kashmiris, like their Pakistani brethren, were born fast-bowlers. Hussian runs up to bowl the fourth delivery of the over to a low-ranking officer known to his friends and colleagues as KK. KK has already hit him for a four and a six in the first three balls. Even under the helmet, Hussian can sense the unmistakable smirk on the officer’s face, the same he had when he pissed on one of Hussian’s stone-pelting comrades and declared, “Now, every time you bathe and water runs down your head, you will remember me.” Hussian’s run-up gathers pace. “I’ll bowl so fast it’ll broadcast the bastard’s brains all over India,” he tells himself.

Then doubt creeps in. “But if he manages to hit me again?” As he leaps into his delivery stride, he reassures himself, “Then I’ll bowl even faster, and if he is still not out, I’ll come in to bowl another over, faster, and then another.” He shoots the ball as his grandfather’s words come back to him, “Remember, son, the batsman may hit as many fours and sixes as he can, but only the bowler has been given the gift of getting somebody out.”

All images from the series Section 144 Srinagar, J&K, March 2011 Digital 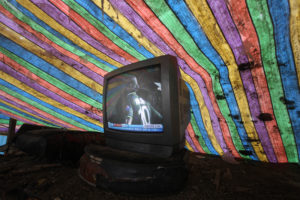 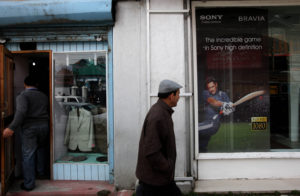 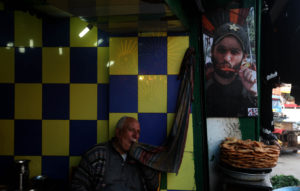 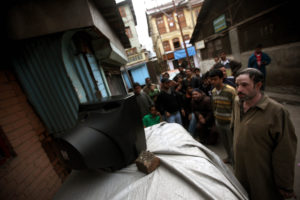 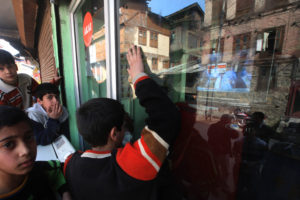