For a brief period as a ceramic artist a few years ago I became obsessed with the staircase motif in my work. I constantly thought and dreamt of stairs and ladders and thought of new ways to express them through clay.

I threw bowls and put a ladder in them, made towers and abstract forms and boxes and slabs and more bowls and more forms with ladders, steps, stairs and pathways in them, trying to exhaust myself with this idea. In the work that was being churned out, there was a thin line between a surreal sculptural piece and a doll house, and I tried very hard, consciously steering clear of the latter, by not overworking a piece or purposely constructing it in an illogical way.

The works are architectural by virtue of elements like peepholes, windows, arches, ledges. The spaces created are meant to be believable, yet the illusion of being real is shattered with the addition of surreal components like doors which open onto emptiness, or staircases which lead to nowhere in particular, windows impossible to reach, ledges running in and out with no apparent logic and winged forms adding to the illusion.

As I delved deeper into construction, I found myself wanting to travel within the spaces I was creating. This set me off in yet another direction, transforming sculptures into “events”. Since the pieces were like little replicas or fossil-like remains of buildings, structures and habitable spaces, I decided to give in to the temptation of a doll house, and create my own characters or dolls.

The easiest way to achieve this was to make these characters act out an event on the sculptures. The kind of events that would take place would be a part of the fictional world we confront in movies, comic books, literature and folk tales. The continual use of the staircase /ladder is the key element which binds all the forms together.

People made out of paper unlike those made of clay have an advantage—I can draw out a character, cut him or her out, changing its mood and action with each drawing and if, for some reason it doesn’t suffice another one can be manufactured quickly.

The idea of using a material like paper which today is throw-away, momentary, fleeting and using it with ceramic which is sophisticated, solid and lasts forever made good partners for a photo-illustrative project brewing in my head.

Therefore the illustrated characters inhabiting the sculptures are not an eternal part of the form—they are a memory, a vision. With them we travel to the depths of a bowl, climb a minuscule ladder, morph into creatures, chase gangsters or get chased ourselves, and the story ends up being a sequential event. 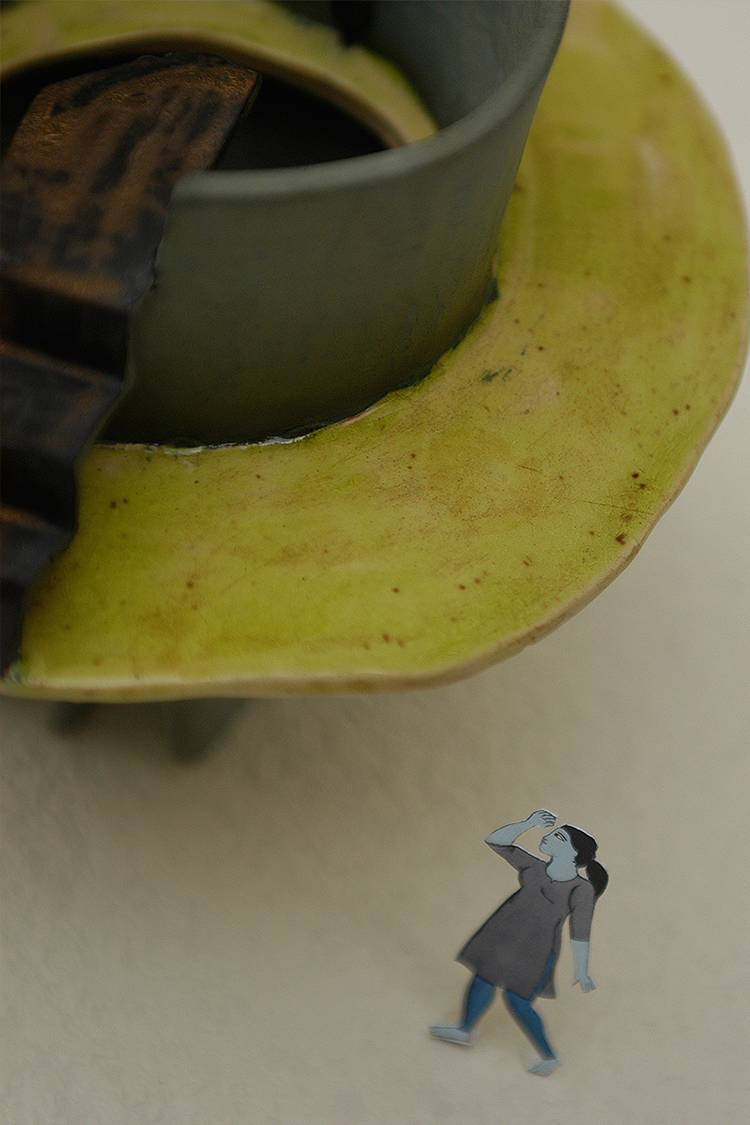 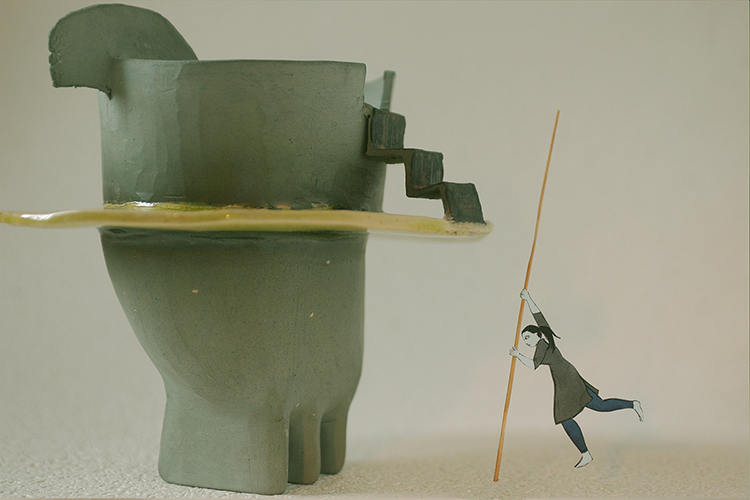 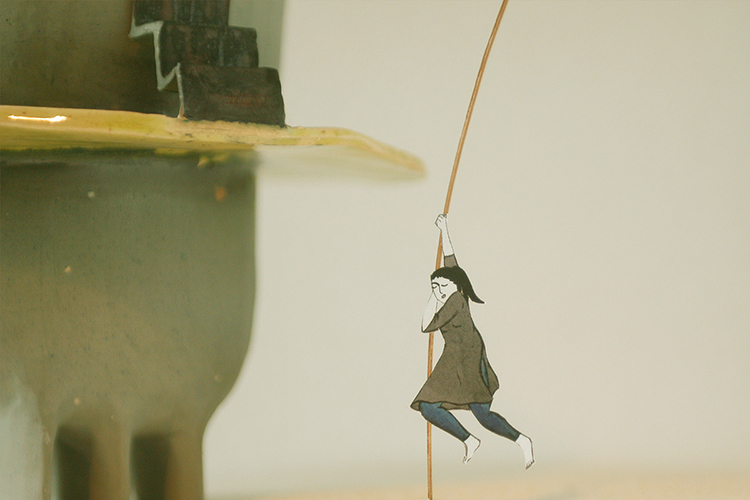 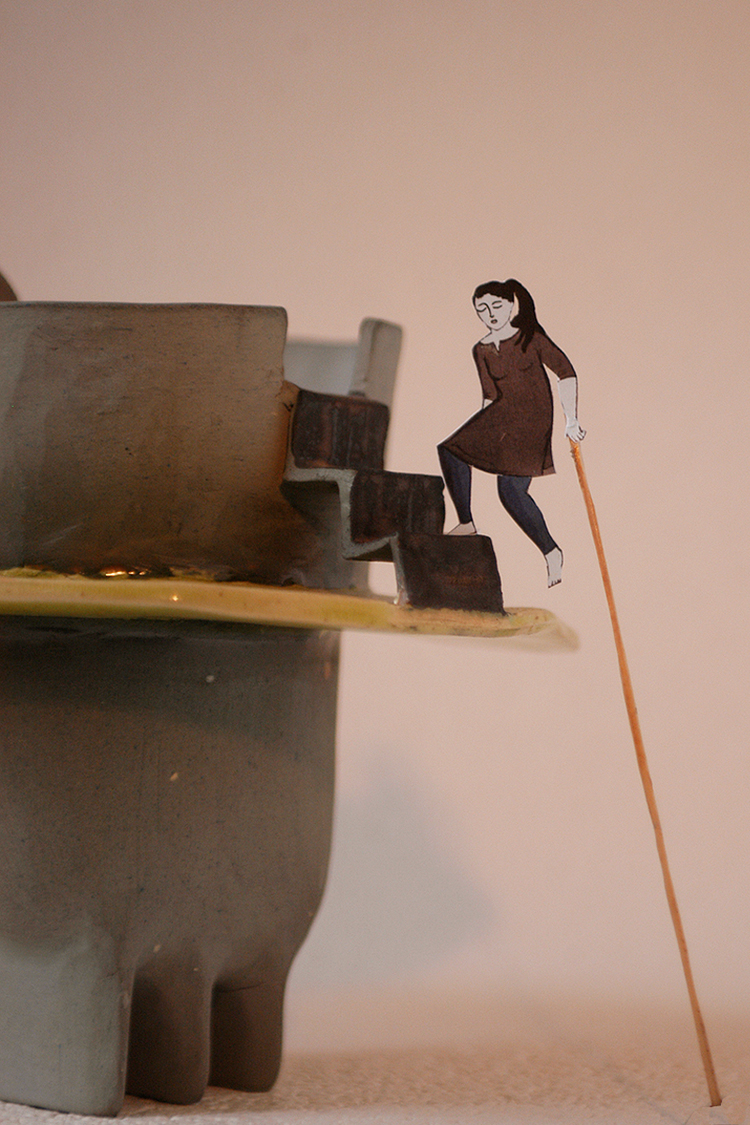 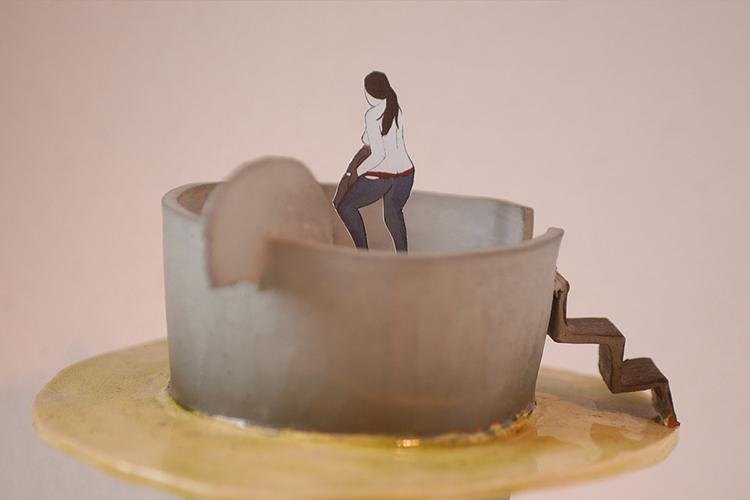 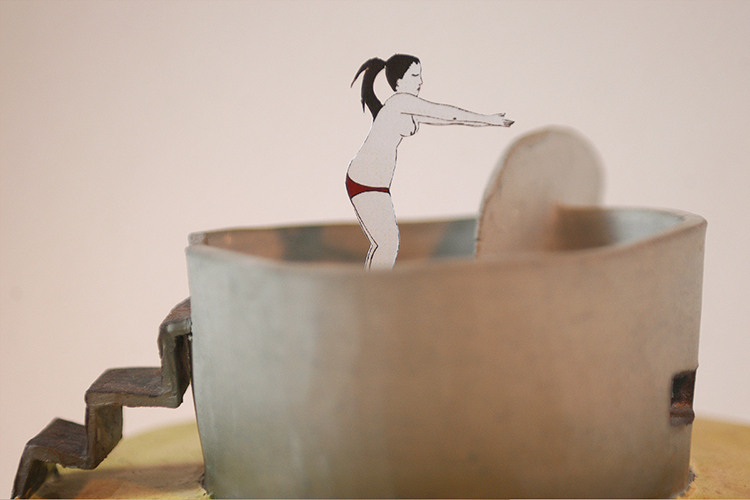 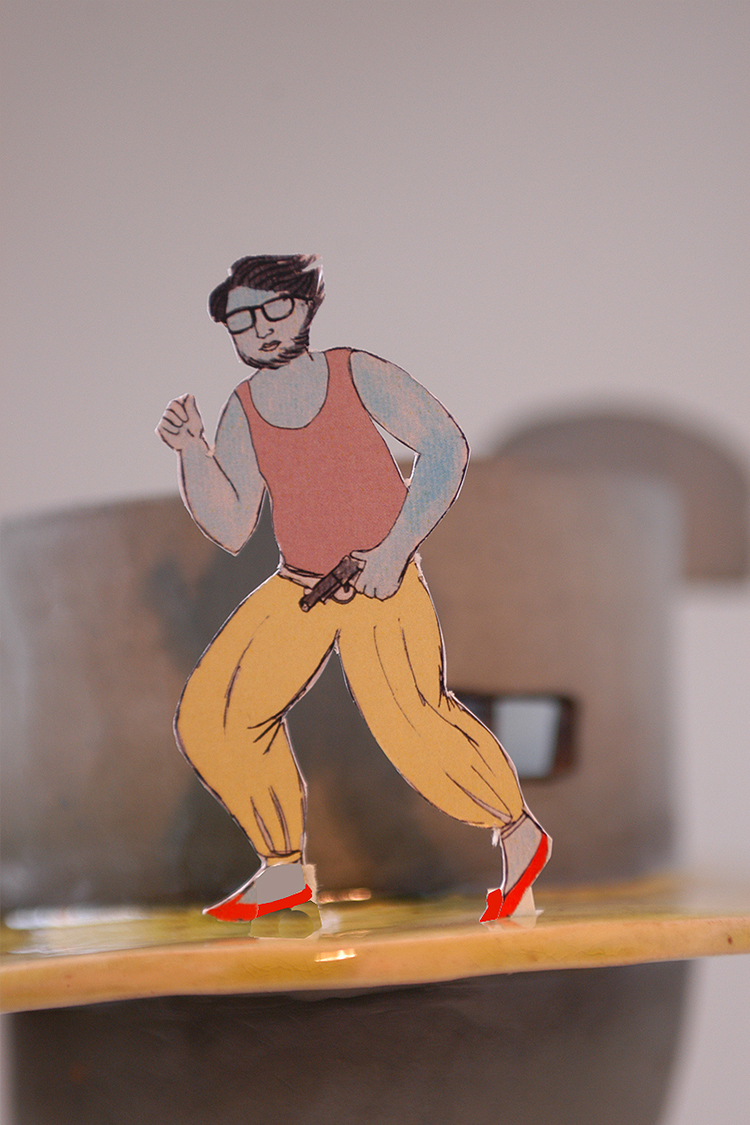 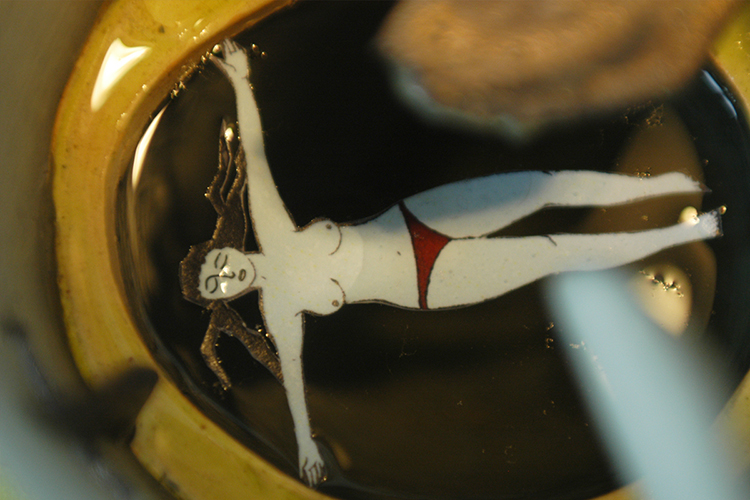 A note from the photographer:
I have lately been very taken with the idea of spatial narrative in Indian folk traditions, like Phad paintings of Rajasthan, which disregards time and treats it as non-existent, making “space” the king. The images are depicted not according to time or chronology but by importance of its characters and place making them like cognitive geographical maps rather than sequential narrative scrolls or comic strips. Shirley’s pieces remind me of alien spaceships, labyrinths and stepwells. The illustrated characters and imaginary spaces for me metaphorically personify humans and their utopias, existing beyond the barriers of time.