From an outsider’s perspective, I feel that Myanmar’s photography history has been overshadowed by the exploits of colonial practitioners. British, German and even Italian- born photographers such as Felice Beato seem to find a prominent place in ethnographic museums and books on South Asian visual history. But there is an unwritten story of local photographers that needs to find some resonance too, as they took up the medium soon after the coming of European practitioners.

The Myanmar Photo Archive (MPA) is a physical archive of such traces that has been amassed in the recent past. The physical material ranges from studio portraiture, private photo albums, official photography, company records, science photography, documentary images as well as studio accessories, slides and negatives. MPA aims to research the historical context of the materials, the earliest of which dates back to 1890 and the most recent of which are from the present.

Some of the first Burmese cameramen served as apprentices to European photographers. By the late 19th century, photography was flourishing with Burmese, Indian and Chinese-run studios here, well up to the 1940s. The following years of war and occupation forced many out of the country. Once Burma gained Independence in 1948, professional portrait studios were in very high demand and a wide spectrum of society from the 1950s and 60s found themselves captured by the lens. In 1962, General Ne Win staged a coup, banning the political opposition, suspending the constitution, and introducing a “Burmese way of socialism.” The change of government and political agenda forced foreigners once again out of the country, and hence affected what was captured or exposed of the lives of those who remained within, given there were restrictions on photography at the time.

The images presented in this short essay  give a glimpse into the practice of professional photographers in the last 90 years. At a time when social media has taken so much of recorded history onto a global platform, perhaps the little-known pasts of the image in Myanmar will resonate with the visual tropes prevalent in South Asia, if not the wider world. The images selected convey a sense of the changing popular tastes and conventions of the urban communities in Myanmar, focussing on portraiture and what may be considered, art photography, seen in the use of multiple exposure and hand-colour tinting.

All images from the Myanmar Photo Archive

Bellay Studio, 1979. Emulating the West, together with Asian country styles of fashion and beauty was popular in Myanmar in the 60s and 70s. This could be due to the well-distributed cinema posters and advertisements in magazines, featuring famous actors and actresses, as well as a thriving film industry. 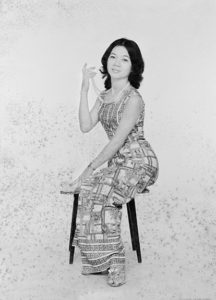 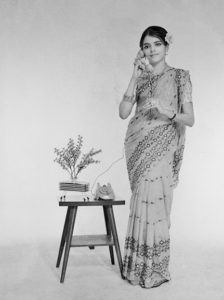 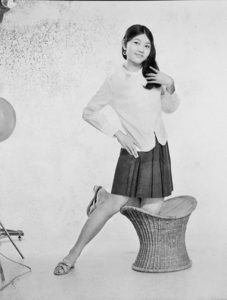 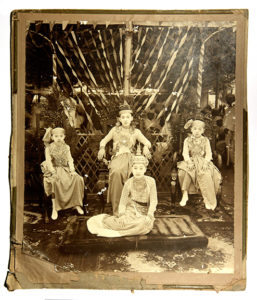 This image was taken during the Shinbyu (Novitiation) ceremony, a significant coming of age ritual in the life of young Buddhist men in Myanmar, which marks the beginning of their religious education. The boys ask the monastery abbot’s permission to become novices, after which their heads are shaved and their fine clothes are exchanged for austere robes worn by monks. This image was taken in the 1930s – a tumultuous time in Myanmar, coloured by early nationalist movements and riots. Buddhism was a mainstay through it all, being the face of the Burmese majority and therefore its cultural identity. 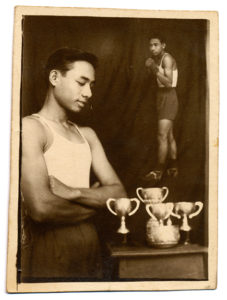 In the 1930s and 40s, the first trick photographs started to appear in Burma. Montages and double exposures became specializations of some photographers. This image from the early 30s is made of two negatives merged in the darkroom. During British rule, sports like cricket, football, tennis and boxing were introduced to the country and clubs were opened but were usually only accessible to the elite in society. 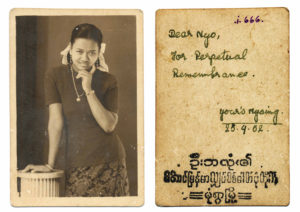 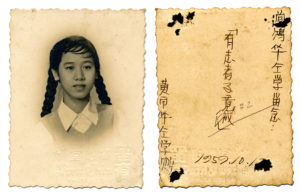 After the early colonial photo studios had disappeared or had been taken over by local photographers, a large number of Chinese-run studios opened. Many of the names and logos were in Chinese and their clientele would be Chinese speakers. During General Ne Win’s rule (1962–1988), the ban on Chinese- language schools caused the decline in Mandarin speaking. The note on the image reads: “For classmate Hong. Where there is a will, there is a way. From classmate Huang.” 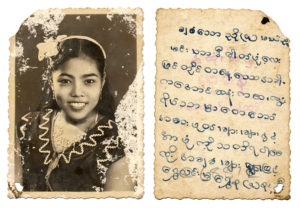 This note says, “My Beloved Nyo (a.k.a) Mal Ohnmar. I hope you will always remember the “ar pone” snack from Aung San Amusement playground, whenever you see this photo. With much love, from Shwe Lin to Shwe Su”.

The photograph above from 1977 was taken at Central Photo Studio, Yangon, which has been closed for some time. A Burmese wedding can be religious or secular, extravagant or simple. Chinese families in Myanmar might prefer less conservative weddings, adopting fashionable Western-style vestiges, and a dinner for friends, family and colleagues; together with the auspicious “double happiness” inscribed in Chinese characters, wishing the couple good fortune. The 1970s were tense times for the Chinese community, and the less attention an event invited, the better. 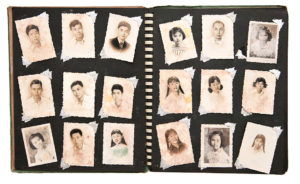 Pages from a private photo album with images from the 1960s