Excerpts from an interview

In the period following the coup d’etat in 1962, when parliamentary democracy was replaced by the military junta, Burma (renamed Myanmar in 1989) was locked in a state of civil unrest.There were constant clashes between civilians and the state, further exacerbated by ethnic and religious differences. Philip Blenkinsop first arrived in Asia in 1989 and thereafter spent intermittent spans of time in Burma during a crucial, transformatory period in the country.

Documenting conflict in the region that  is mostly overlooked by mainstream media, Philip’s photographic work has centered around Cambodia, Burma, Nepal and East Timor, among other sectors. In many respects, Blenkinsop has been an insider, deeply connected with the subject that he captures. His resounding, entrenched style seems to volunteer, despite harsh circumstances, how the people withstand extreme political changes. Philip speaks here of some of his intentions, his encounters and his sense of an impending future for Myanmar. The excerpt below is drawn from an interview with him, conducted by Tanvi Mishra in January 2017.

“My introduction to Burma was via the Karen; I was immediately taken with their struggle and their determination in the face of such oppression. Alas, I feel I did not serve them as well as I might have. I was still finding my voice.

I remember one seven hour session in particular, hunkered down in a mountain-spur, fox-hole under 1600-2000 artillery rounds (the number varied depending on your sources, KNLA or Thai Military) with a Karen guerrilla, several years younger than I, whose shrapnel wounds a colleague and I would bandage later in the day. At one point in the afternoon, our hole took a direct hit from a ‘Charles Gustav’, an 84mm recoilless rifle of Swedish Origin. The Gustav’s flat trajectory gives one no time to brace for impact.

I am reminded now of the face of a weathered Karen observer, standing on the perimeter of a burnt out village several years earlier, identifying incoming rounds and counting down to impact when he was interrupted by the whoosh of compacted sound waves and an explosion that slammed into the hillside; He turns to me and says, “eighty-four millimetre,” and then, a smile breaking across his face, “No warning.”

Silence and that blinding orange-white light hung spectrally, filling every crevice of that subterranean womb for the first and last time;  a secret vision of a place that only Laa Er and I would share. He had been married only weeks before in an area of lowlands to the South and had not had the time to have a photo of his wife taken before being called on to take the place of a fallen comrade.

The blast of the 84mm skims off the roof and spares us. Debris falls through the gaps between tree trunks and into our eyes. Our ears ring. The shelling continues. I looked at him, unable to converse but feeling as though I needed to speak of the fear I felt, as if a ‘confession’ would elicit some words of wisdom. Years later I wonder whether it might have been just the need to hear my own voice for the last time. Whatever, I have felt guilty ever since for not having exhibited the strength and bravado that he would no doubt have preferred at that moment. Times shared like this link you inextricably with a people and a struggle.

…I entered Burma through Rangoon for limited durations in 1996 and 2000, and was subsequently banned and unable to return until after my name was removed from the extensive blacklist in 2011. [Ed note: That year also marked the swearing in of Thein Sein, President of a nominally civilian government, which allowed for the release of further prisoners and the right to peaceful demonstration, as well as a (temporary) truce with Shan and Kachin rebels.]

What hit me upon my return in 2012 was how people seemed so much more relaxed, no longer concerned that a westerner’s presence might bring trouble in the form of unwanted scrutiny.

My approach and aesthetic, my language if you like, has been determined to a great degree by my goal in conflict areas: to shine a light on a people’s plight and in doing so, to immortalise combatants on film for future generations; to allow their descendants to go back in time and to visit them during that time of struggle. Nurturing the idea that perhaps for these people, living and resisting in total obscurity, I could become a conduit for their deeds, to become known by their families and future generations…My work is, in most cases, completely subjective and I have no qualms about that. What is important is that one’s approach is objective.

There is an undeniable beauty and lure to Burma that is specific to the country; tangible, fragile and vulnerable. There is not that SLORC- induced, fear and dread that hung over the country when I was there in the mid-90s, but people are still dying on the borders and minorities continue to be persecuted in the East and West. Horrific human rights abuses abound and yet people have the gall to speak of progress and development; more like, “get in fast and make as much as we can as fast as we can.” The gridlocked traffic and failing infrastructure in Rangoon, the inevitable increasing pollution and plummeting standard of living, the old being torn down and replaced without a thought – and for what end? It’s a pact with the devil. I have seen these changes first-hand in Phnom Penh, in Saigon, in Hanoi. The blind embrace of western culture and the inevitable demise of Burma’s own incredible cultures, its peoples, their languages and with those, their oral histories. What I see as my own particular ‘Burmese’ goal is to interpret visually as much of the here and now as I can; those fleeting moments where paths collide and windows open onto other worlds. It is a small part to play, but, I believe, an important one, to bear witness and to capture everyday exchanges. For now, the documentation must take prime importance.”

All Images in 35mm and medium format film

Unperturbed by my presence, a young girl who just finished school for the day, dances off a main street in Moulmein. June 2012 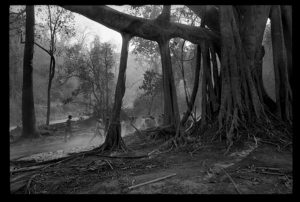 New recruits of the Mong Tai Army in the rebel headquarters of Mong La, 1994 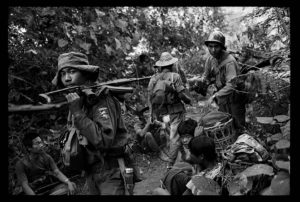 ABSDF and Karen guerrillas en-route to their frontline positions on the Dawna range, 1992 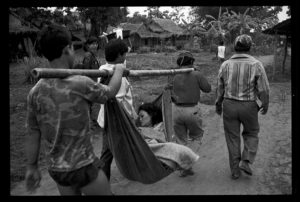 A Karen woman, suffering from malaria is carried to a field hospital in Wang Ka camp on the Thai/Burmese border, 1989 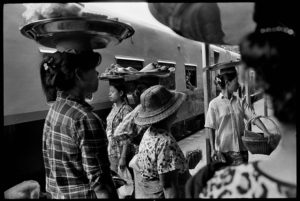 En-route to Mandalay from Myitkyina. Burma, 2013 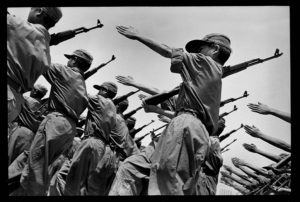 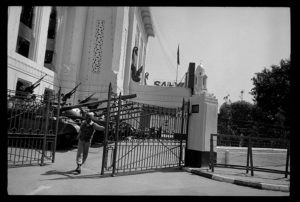 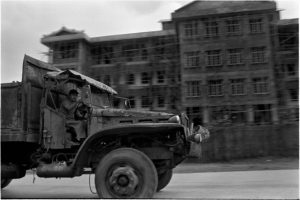