As a nation re-addressing its relationship with the global community at a time when people are increasingly discovering the world through visual media, photography in Myanmar will undoubtedly play an important role in how international perceptions of the country develop. Relatively little is known about everyday life in Myanmar, and so the images produced at this time will have a significant impact on the increasingly homogenized views accredited to the country through overtly touristic snapshots or selective news coverage.

The unshackling of Myanmar’s media in recent years has offered new autonomy to the country’s photographers, and allowed international practitioners access to places, people and issues heavily restricted in the past. A wealth of new imagery is being produced and presented, and it is these images which will drive much of the visual understanding of this complex country.

Depending on one’s point of view, Myanmar is either blessed or cursed by an abundance of natural resources. As photographers test the waters of what will be tolerated by the National League for Democracy, the new administration of 2016, the country’s mines, dams and forests have become muses for a number of photographers drawn to the secret world and underbelly of resource extraction here.

Photographer Minzayar Oo has gained many plaudits for his expansive body of work documenting the jade mines of Hpakant in the northern state of Kachin. An area still off-limits to foreign journalists, his incisive series has done much to raise awareness around the horrific conditions experienced by miners and the ‘bigger picture’ of corruption and exploitation which permeates the industry, as well as its influence on regional conflict. On a smaller scale, but with a similar sensitivity, Bangladeshi photographer Debasish Shom’s Oil Rush documents individuals hand-drilling crude oil from areas lining the Irrawaddy River.

Although tackling their subjects in very different ways, both bodies of work successfully convey the exploitative nature of the respective industries and the almost helpless desperation fundamental to the choices made by those who work in these conditions. And yet both photographers also imbue their imagery with a tangible sense of the resilience and camaraderie which permeates these extraction sites – essential to the survival of the lowest income groups created through one of Myanmar’s most controversial industries.

The journalistic styles of these projects convey how the photographers have become insiders to the events depicted, and the lives of those being photographed. With attention also paid to the landscape and living conditions, these narrative- driven selections, highlight internationally growing sociological and environmental concerns.

One of the most critically acclaimed depictions of issues surrounding Myanmar’s policy on natural resources is the series Solar Portraits by Spanish photographer Rubén Salgado Escudero. A body of work originally begun during an assignment for UN-Habitat (the United Nations Human Settlement Programme), Solar Portraits has broadened into
a global project which articulates the benefits offered to communities without electricity by the harvesting of solar energy.

Each of the three bodies of work are strikingly executed and although they are visually distinct, what separates them is not how they were shot, but why. Because there is relatively little photography being exhibited in Myanmar, there is not yet enough available content which can reflect the significant development of a style or personal voice. Solar Portraits – technically one of the finest sequential series produced in the country – has resulted in a significant number of international exhibitions and widespread publicity. The issue with this is not that the work doesn’t warrant exposure, rather that the pressure to publish images from ‘emerging Myanmar’ exerts the pressure of exposure wherein projects are sometimes pushed beyond their original briefs.

Escudero’s imagery is a kind of staged advocacy work –representing not only portraiture from Myanmar, but photography of Myanmar in general. But the vision of the work is not through the eyes of the Burmese people, or even the photographer, but a representation of what major aid agencies need to produce in order to document (and to a certain extent justify) their existence –the people depicted become props rather than protagonists.

The strength of Solar Portraits lies in the repurposing of stereotypes –the thanaka- daubed school children, the ‘long-neck’ Padaung woman – to reaffirm a general notion of what Myanmar is to a selected audience. But once that imagery begins to represent a systemic or stereotype, it loses its original purpose and it becomes impossible to ensure that the audience understands how these images represent a program or campaign, and not a country. It is not the fault of the photographer, but of the way that imagery of developing nations is consumed, commodified, and therefore geared to reaffirm preconceptions and support an industry.

Diminishing resources and funding for independent documentary work means that we are falling into a grey area where the international vision of developing nations is led by imagery created to serve an increasingly stretched aid sector or an increasingly sensationalist news sector.

Documentary photographer Peter DiCampo has spoken about this phenomenon in Africa, where the predominance of news and aid photography has been credited with skewed international perceptions of, essentially, an entire continent. A response to which was the hugely successful Everyday Africa Instagram account, an outstanding example of democratizing image production and therefore diversifying the range of imagery available.

That is what is needed in Myanmar – support for local photographers from both within
and outside. Images by photographers such as Escudero are vital for the agencies that are supporting development in countries like Myanmar, but while this country is developing its voice in the photography world, it is essential that the dominant visual output of the nation is not stage-managed by international organizations, but led by informed and independent projects. 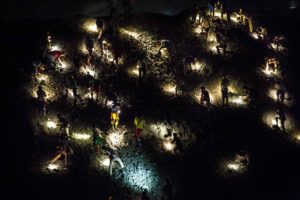 Minzayar Oo, From the series The Price Of Jade. Miners with torchlights on their heads go over a pile of company mining waste, looking for jade, Hpakant, Kachin State, Myanmar, April 25, 2015. Some miners work by day while others work by night but the mines never get a rest around clock.