Myanmar sits at the intersection of China, India, and the ten ASEAN nations, an area home to almost half the world’s population and some of its fastest-growing economies. But despite its neighbours’ successes, just 26% of the country’s population has access to an electrical grid, and at least half of that percentage lives in cities. In rural areas, infrastructure is at a nascent stage: of the estimated 68,000 villages in Myanmar, only 3,000 or so have any sort of access to power.

With vast opportunities for hydro-power development and extensive offshore natural gas reserves, electricity should be the last of Myanmar’s challenges. Although a wave of political reforms starting in 2011 ceded control of the country to a nominally civilian administration, the aftershocks of six decades of direct military rule are difficult to curtail. In the 1990s, the ruling junta invited its neighbours – namely Thailand, China and India – to develop hydro- power projects in and around the country, with most of the electricity produced, earmarked for export. Today, overhead wires carrying power to Myanmar’s dominating neighbours, casts a shadow over thousands of un-electrified villages, which have seen no benefit from the export windfall earned by the government.

In a country where almost all rural areas are still in darkness, candles, which are both expensive and perhaps dangerous, are the only source of light available once the sun sets. As developing the requisite infrastructure to connect remote, rural villages to the grid will take a long time, solar energy is a viable and much-needed solution that has the potential to improve the lives of millions in a short time. Small, inexpensive photovoltaic power (PV) systems can provide households with at least 12 hours of light during the night, allowing people to do more with their waking hours at no additional cost.

These portraits depict the lives of inhabitants in remote areas of Myanmar who, for the first time have access to electricity through the power of solar energy. Each subject was asked about how having electricity had affected their life, and changed their circumstances.

All images from the series Solar Portraits, 2014 Digital 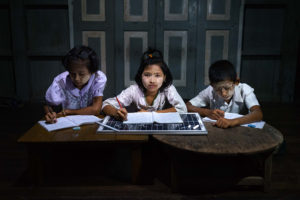 Grade 11 students do their homework in a solar-powered after- school community center near in Taman Chan Village in Dala Township. 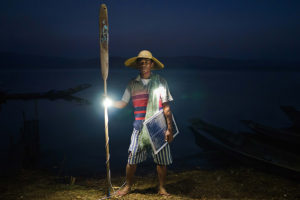 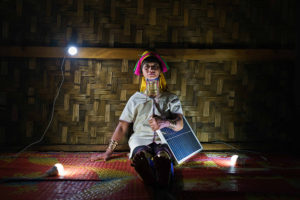 Daw Mu Nan, 45, a Padaung farmer and mother of 8 at her grandson’s home in Pa Dan Kho Village, Kayah State. 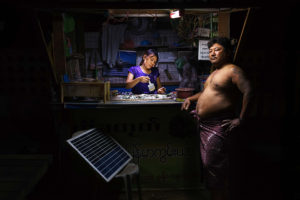 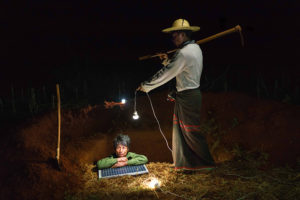 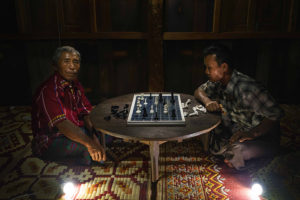 Farmers U Moe Sal, 67 and Ko Wai Naing Htoo, 43 play chess after a day out in the field, Pa Dan Kho Village in Kayah State.