Still Lifes from a Vanishing City

In 2010, the junta-led government of Myanmar began to loose its grip. As the military regime began to recede, it expeditiously auctioned off 80% of the country’s state-owned assets to the highest bidders and earmarked hundreds of buildings in downtown Yangon for demolition and hasty redevelopment. This opaque, unpredictable, yet extremely profitable fire sale would profoundly reshape the country’s economic landscape and hence, the lives of those who had long called the former colonial capital of Yangon or Rangoon, their home.

This somewhat disaffected moment that preceded Myanmar’s venture out of military rule in 2011 created a kind of urban, anti-utopia. Meandering the lost world of downtown Yangon,

it was not the large edifices of an erstwhile Empire that drew me in, but rather those who lived in its shadows. People running small-time shops, residents lining the alleyways, inhabiting little homes, secluded and temporary – this is where I found that the modern city’s essence lay, and as a consequence its hidden histories emanating from the living conditions of the civilian population.

In a world where anyone accused or perceived of being a traitor could end up in prison with little legal recourse, has led many to seek refuge in the sanctity of their homes, unleashing their private obsessions and day-to-day anxieties of trying to make ends meet – yet still, relative to what has passed, it is a celebration of life.

All images from the series Still Lifes from a Vanishing City, Yangon, 2015 35mm slide film 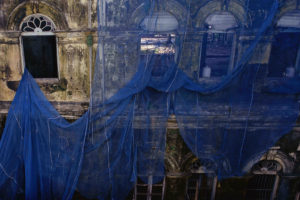 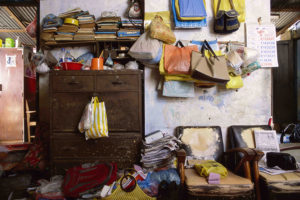 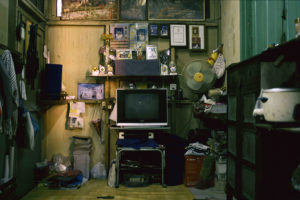 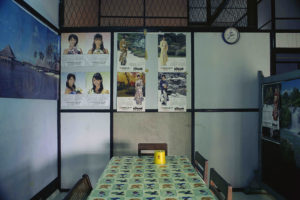 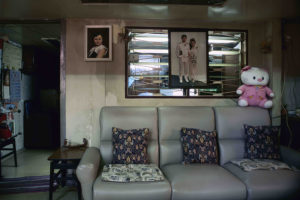 Still life with leatherette couch, wedding portrait, and a painting of the matriarch 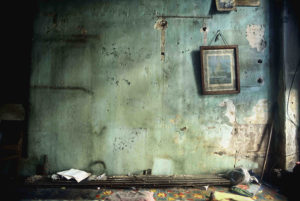