Walking down the streets of Rangoon (Yangon) or Mandalay, one would encounter various ethnicities that, on the surface, seem to mingle in a convivial manner. But there is hidden discrimination and prejudice here, based primarily on nationality or those of mixed blood descent. There are eight major national ethnic races in Burma as well as many different subgroups. Beyond these, there are ‘unrecognized’ groups such as the Burmese-Chinese, Burmese-Indians, Anglo-Burmese and Gurkhas.

While Burma considers itself multi-religious, there are wide-ranging, civil restrictions even on national ethnic groups like the Chin, Kachin, Shan, Mon etc. with preferential treatment given to the dominant Bamar. Those who withstand the worst consequences are perhaps the unrecognized category, who are largely barred from the civil service and military and are disenfranchised by being labelled ‘foreigners’ or ‘non-citizens’ of Burma. Furthermore, they face numerous discriminatory obstacles in accessing education and they have no citizenship rights. Of them, the Burmese-Chinese however have been the most successful through their business acumen, entrepreneurship and alliances with other overseas Chinese groups.

The problem is far from abated, especially when communal disharmony becomes compounded with the already existing ethnic issue. On this account, the Muslim community, the Rohingyas have suffered the most, especially in the Rakhine State. My work hence focuses on the complexities which underplay the daily lives of some of these groups, infused with moments of celebration and loss.

All images from the series The Other Burma ,Yangon, Digital 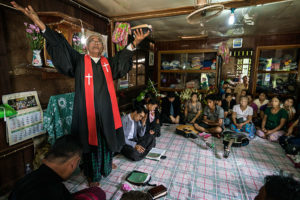 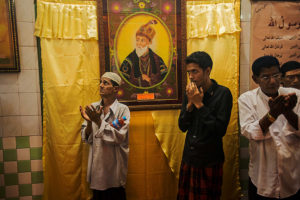 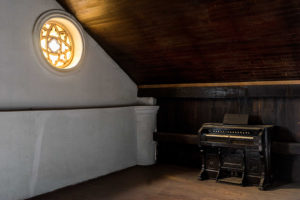 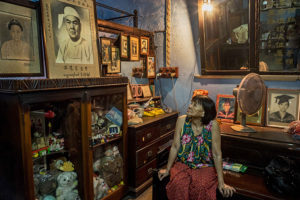 Burmese Christians at a Sunday service at the Holy Trinity Church. Yangon, 2013 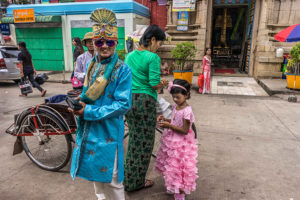 Man dressed with an ornate headdress to celebrate the eve of Diwali (Choti Diwali) outside the Sri Varada Raja Perumal Temple on 51st Street Pazundaung. Yangon, 2015