Yangon to Grow With

Imagine your life in a city called Yangon. What do you envisage? Come with me, see it through my eyes, and let me tell you a little tale through pictures.

First, a truncated history whirring though my mind like an old, silent film: The erstwhile, exotically named Rangoon, annexed by the British, eventually becoming a province of British India. A home to the ailing last Mughal Emperor of India, Bahadur Shah Zafar, exiled after the Mutiny of 1857. The trauma of war, and then the Japanese occupation, until the British separate Burma from India, making it a crown colony. A cosmopolitan, political hub of British Burma, metamorphosed under the legacy of the Empire. The bustling port, its spacious parks, its sophisticated grid-like structure, the resplendent colonial buildings… yes, Rangoon was truly the garden of the East, with its gilded shrine, the magnificent Shwe Dagon, dominating the skyline and visibly gleaming from every corner of the city! Independence, followed by decades of political upheaval under military rule. Until now – a moment where we are perched on the cusp of change.

Now, come back to the present. Life is hard living in a city like Yangon when one is unemployed. And so I walk and explore every inch of this city and make it my own, talking to people who are willing to listen. I see it all – the crumbling beauty, the inconvenient truths residing within the city’s limits, the darkness and the light. The duality emerges like the flip sides of a coin.

The city’s major roads run east to west like pulsating arteries, choked with the lifeblood of its teeming inhabitants. I live downtown and see things as they really are: the people, places and buildings…so many buildings! Around Anwaratha road, one cannot escape the near nausea inducing hustle and bustle along the street. Over crowded buses hurtle along the street, roaring past pedestrians who wait patiently for a moment to slip amongst the ever-moving river of traffic. I have no choice but to face the same views almost every day: the continuous stream of buses running through the downtown streets, people walking on the pavements, a series of cinema halls along the stretch of Sule Pagoda Road and pools of commuters gathered at rush hour…. Day in and day out, the monotony is enough to kill you.

But you, dear reader, have a choice – the choice to move to the next image. So let us shift to the more secluded and pleasing surroundings of Kandawgyi Park. Gazing at the serene surface of the lake pulls you away from the chaos and noise and makes you fall in love with the city all over again. Populated with quiet couples in corners, and the odd toy salesman hawking his wares, it suddenly dawns on me that some people really know how to enjoy their lives.

I live with my family in a flat filled with memories on the second floor of a nearly hundred-year-old three-storied building on 31st Street. The walls are decorated with posters, wall calendars, photographs, anything which takes their fancy. The pride of place is the wedding photo of my younger brother, a Navy man, who made my parents proud. He moved into his own flat several years ago, but his photo remains. I have painted the wall in my room green; I keep my section of the house bare and uncluttered. I need my space to read and write and to pray. We lived in relative peace until, one day, the landlord called all the tenants for a meeting to discuss renovating the old building. No, not just renovating – he wanted to modernize the building, tear down the old to make way for the new – just like what is happening all over the city.

But where will we live now? I am convinced that our lives are built on these memories and steeped within the walls of our homes. We do not want to leave everything we know behind, and yet, this is inevitable. So what does the future hold? My wish is for Yangon to be as beautiful as bountiful as it used to be. I want to live in this city which continually surprises me, to build new memories from all its forgotten corners. I grew up in Yangon, but I am also growing with it. 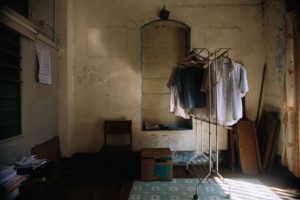