Acts of Faith : The Dawoodi Bohras

Dawoodi Bohras are the main stream of the Bohras, a sub-sect of Isma’ili Shia Islam, emerging primarily from India. Their spiritual leader is Dr. Syedna Mohammed Burhanuddin. He is also known as the Dai al-Mutlaq and is the 52nd Dai in an unbroken chain of Daiyyun. The Dai al-Mutlaq is the Imam’s vicegerent, with full authority to govern the Dawoodi Bohra community in all matters both spiritual and temporal.

Dr. Syedna Mohammed Burhanuddin is the 52nd Da’i al-Mutlaqof the largest group of Musta’li Ismailis, the Dawoodi Bohras. He celebrates Ashura or Ashara Mubaraka (the first 10 days of Moharram), in any one city around the world. Ashura (the tenth of Moharram) is the anniversary of Husaynibn Ali’s death. This event is of great significance to the community. Members from around the world descend to hear the Syedna’s sermon on the Battle of Karbalaby the Dai. Each city or town has a locally appointed deputy of Syedna who leads the local congregation during these days. Ashura Mubaraka 2007 (Hijra 1428) was held in Colombo, Sri Lanka. Being born into the Bohra faith, I had a unique opportunity to capture the images of Dawoodi Bohras during their ceremonial practice of the Ashura.

At this time, a visible transformation occurs in the city that rapidly caters to the swelling crowds, as more than 20,000 devotees arrive inColombo to partake in the ten day ritual. Massive structures are built, permits are obtained,roads are formed, and almost overnight, vast expanses and empty plots are flushed with food stalls, transportation, security guards and accommodation facilities. Ashura brings forth a spiritual metamorphosis as well. The sense of community is redefined and the followers are united in one cause, as devotion and worship meld with time and space to create a riveting spiritual experience.

All images from the series Acts of Faith, Colombo 2007 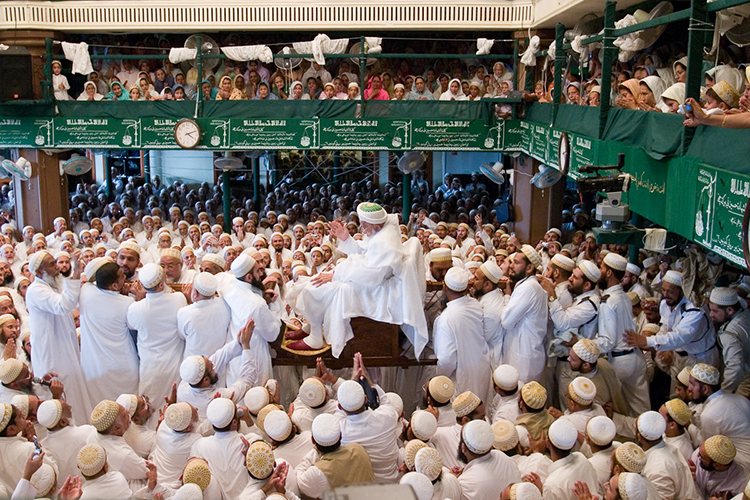 Syedna Mohammed Burhanuddin being carried into the Hussaini Masjid. 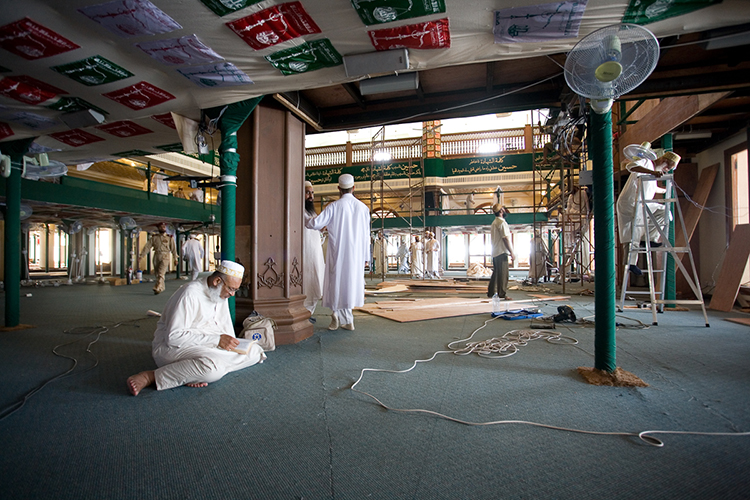 A senior member finds solitude reading the Holy Quran, while others prepare for the start of Ashura. 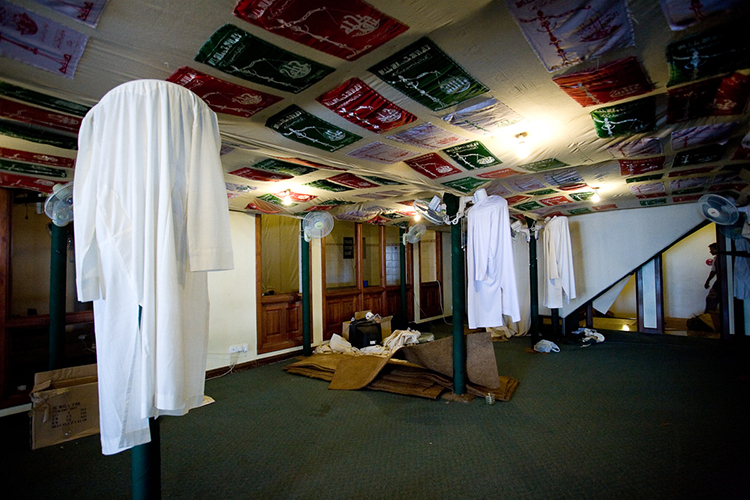 “Saya”, long white jackets worn by the men in the Dawoodi Bohra Community, are placed over the temporary ceiling fans. 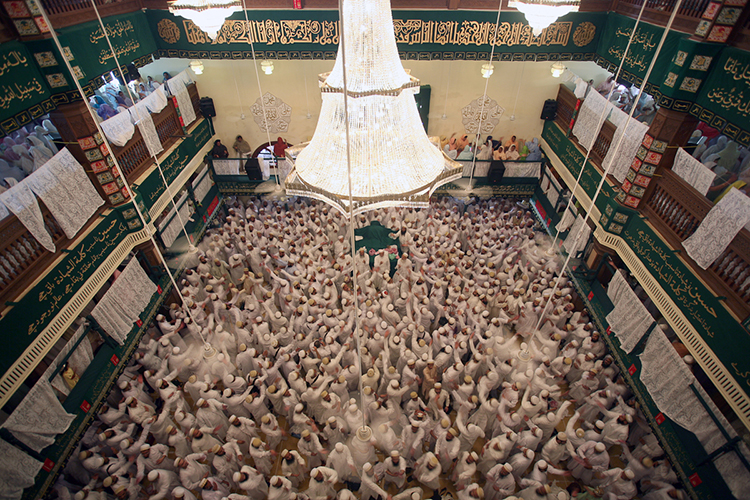 “Mataam”, the hitting of one’s chest with one or two hands, reaches a climax during the last days of Ashura. 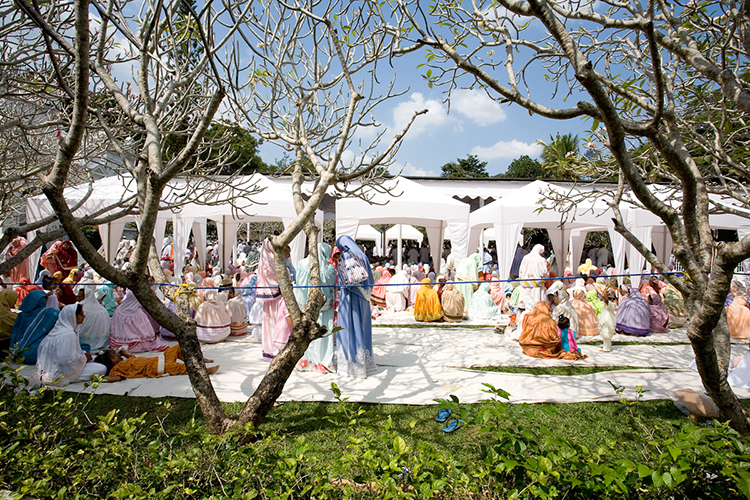 From the series Acts of Faith Colombo, 2007, Digital Women await the arrival of the Dai al- Mutlaq, the Syedna at Saifi Villa, Colombo. 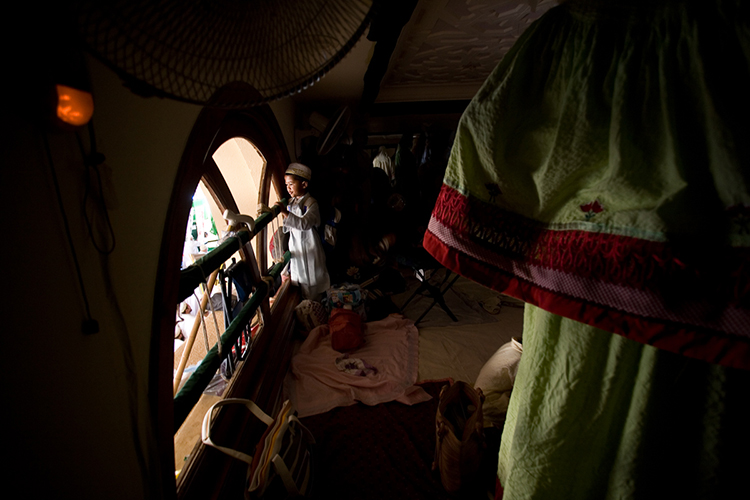 A young boy peers down into the mens’ floor. He stands in a temporary space, which has been suspended over the ground floor and under the first, built to cater to the massive crowds. 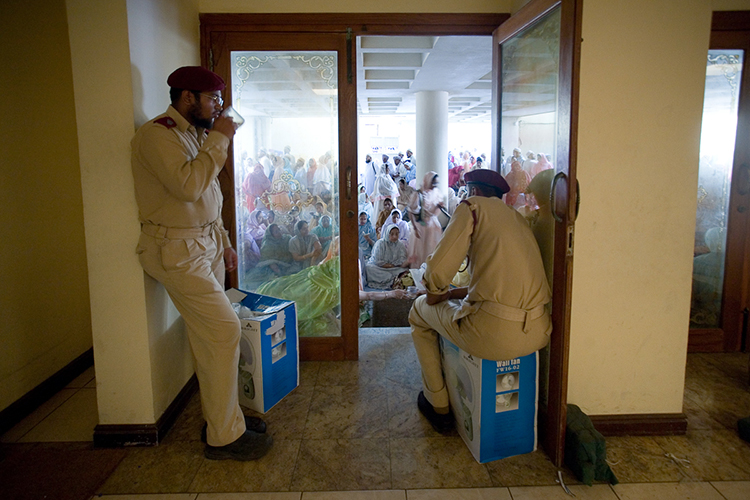 Burhani Guards, the official security personnel of the Dawoodi Bohras are flown in from Mumbai for crowd control.

The elders, with limited mobility, occupy the driveway of the mosque premises and watch the sermon on television screens. 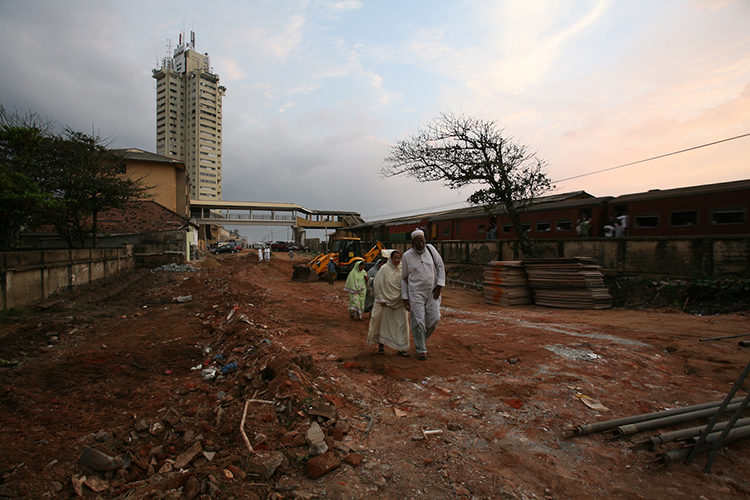 Bohras enter the mosque premises through the Colombo Plan Road “under construction”.