The face of a young girl stares at you, her kohl-rimmed eyes haunting in their vacancy. This young girl is anything but the vision of a blushing bride, and yet here she is, on her wedding day, at age 16. The statistics are grim: in Nepal approximately 41% of girls under the age of 18 are married off. Despite important steps being taken to promote gender equality, as well as government commitment to ending child marriage– the Ministry of Women, Children and Social Welfare finalised Nepal’s first national strategy on child marriage with support from UNICEF Nepal and Girls Not Brides Nepal – the post-earthquake environment has meant slow progress and the development of a national implementation plan has been further delayed. Adolescent, virginal brides are prized ‘commodities,’ and yet, a high percentage of these girls are also victims of domestic violence and sexual abuse, often having little or no power over their reproductive rights.

Since 2008, installation artist Sheelasha Rajbhandari’s work has dealt specifically with women’s issues. Looking at provocative topics such as abortion and menstruation, the artist’s latest work deals with child brides and other taboos built within the construct of marriage. In her series Agony of the New Bed, portraits of child brides (some of which have been shot by Stephanie Sinclair/Too Young to Wed) have been re-appropriated as screen prints on cotton and placed on a constructed marital bed – the face is obliterated with golden embroidery, erasing her identity while cosseting her in the ‘safety’ of her husband’s home and stifling her voice at the same time. The tender age of the girls and the heart wrenching isolation away from their homes and families translates into an often terrifying and agonizing experience.

The artist also examines the imbalance within a marriage. As Sheelasha says: “[Marriage] is a union between two individuals, but not everyone acquires equality within this relationship. Pativrata is the Sanskrit word used to describe a loyal dutiful wife, who is subservient to her husband and protected by him in return. A woman has to transform her identity from being a daughter to being a wife – men do not have to go through such identity alteration. This practice has contributed to the preference of sons over daughters, as daughters are supposed to go to the ‘other’s’ place and sons continue the family lineage. This patriarchal system is a socio- political construct, as is a woman’s post marriage identity which is recognised as her ‘fate.’” In the series My Line of Fate, Sheelasha uses photographs of the palms of different women on which lines of maps are drawn. These lines are then embroidered, tracing each woman’s personal history. On the left palm, the embroidered word ghar (home) has been cut and replaced with word maiti (parental home). The word ghar then becomes permanent in the right side of the palm, denoting her relocation from her own house to her husband’s house after marriage. But the question of belonging and identity is left unanswered, where perhaps a woman can never fully be at ease after marriage,either at home, or at her maiti. 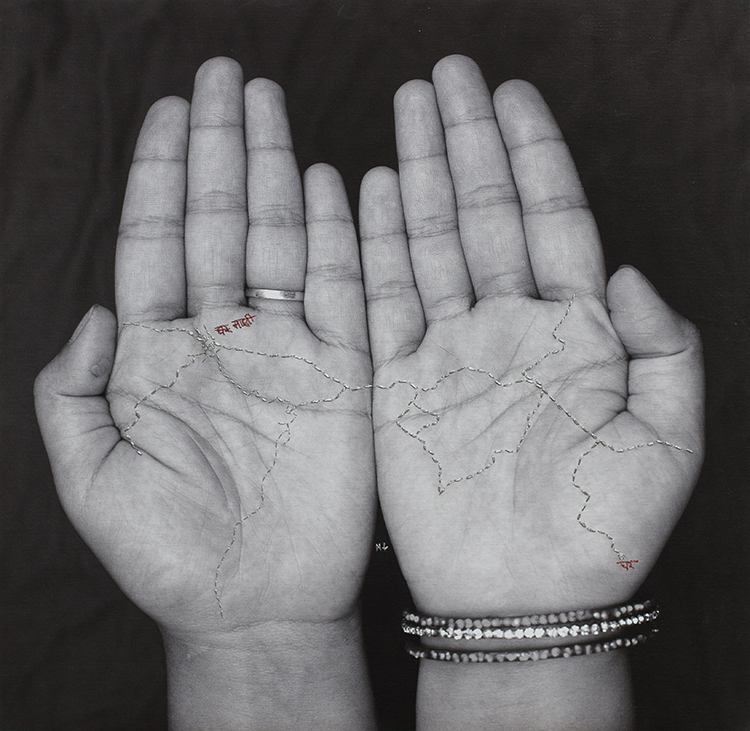 “My Line of Fate” From the series Marriage Taboos. Digital print on canvas, embroidery thread, Kathmandu 2016. Produced in collaboration with Kireet Rajbhandari 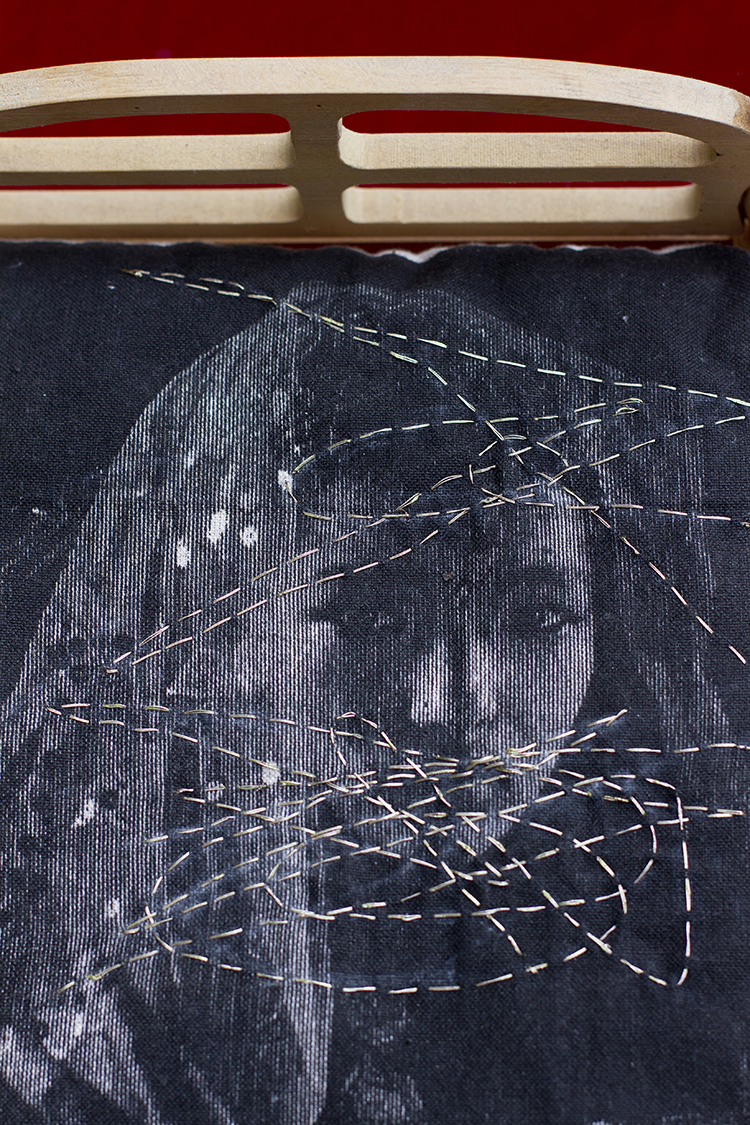