In an essay on sleep, the poet Anne Carson writes that her “earliest memory is of a dream.”¹ In it, Carson descends to the family living room where she is arrested by an uncanny feeling, a strange sense that the space, with its green furniture and walls, is at a glance, as it ever was, yet radiates a deep and unshakeable difference, “…as if it had gone mad.” Carson knits this dream—or rather, its memory—into the unsettling experience of a familiar face being slowly rendered unfamiliar, as with her late father who succumbed to dementia. For Carson, the dream is not a nightmare but offers an inexplicable consolation in having “…caught the living room sleeping,” an almost mystical encounter with a domestic space outside its economy of daily use. 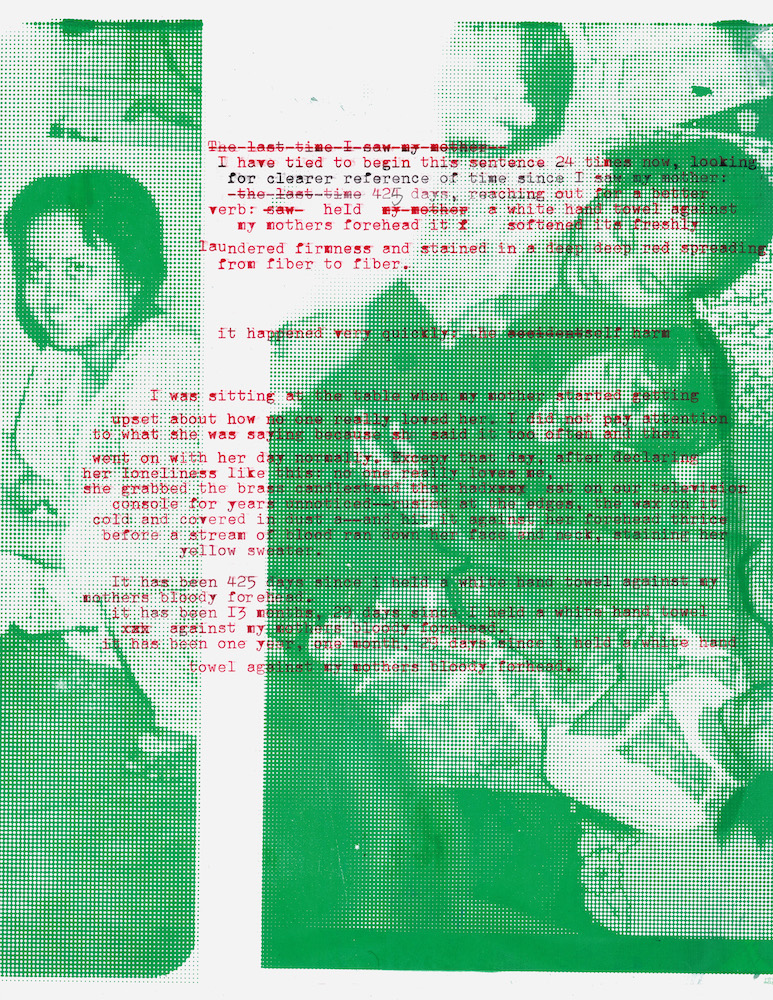 Cheryl Mukherji’s images in Ghorer Bairer Aalo (The Light Outside Home) evoke a similar uncanniness, caught in the passage from a memory to a dream, from child to caregiver, and—in an echo of the Tagore novel with which the series shares its name—from home to the world. Mukherji combines family-album photographs with self-portraits taken in her Brooklyn apartment. Central to these are textured, archival screenprints of her mother, who is visible behind a colourful gauzy film. The photographs are punctuated by Mukherji’s account of witnessing her mother during an episode of self-harm. The words redact and propel each other, stumbling as if to hold a traumatic memory in place; wondering how a familiar face can begin to feel suddenly distant. “I have begun this sentence 28 times now,” Mukherji writes of her false starts, as language becomes increasingly unfamiliar and inadequate in closing the distance to the “430 days since I held a hand towel against my mother’s bloody forehead.” 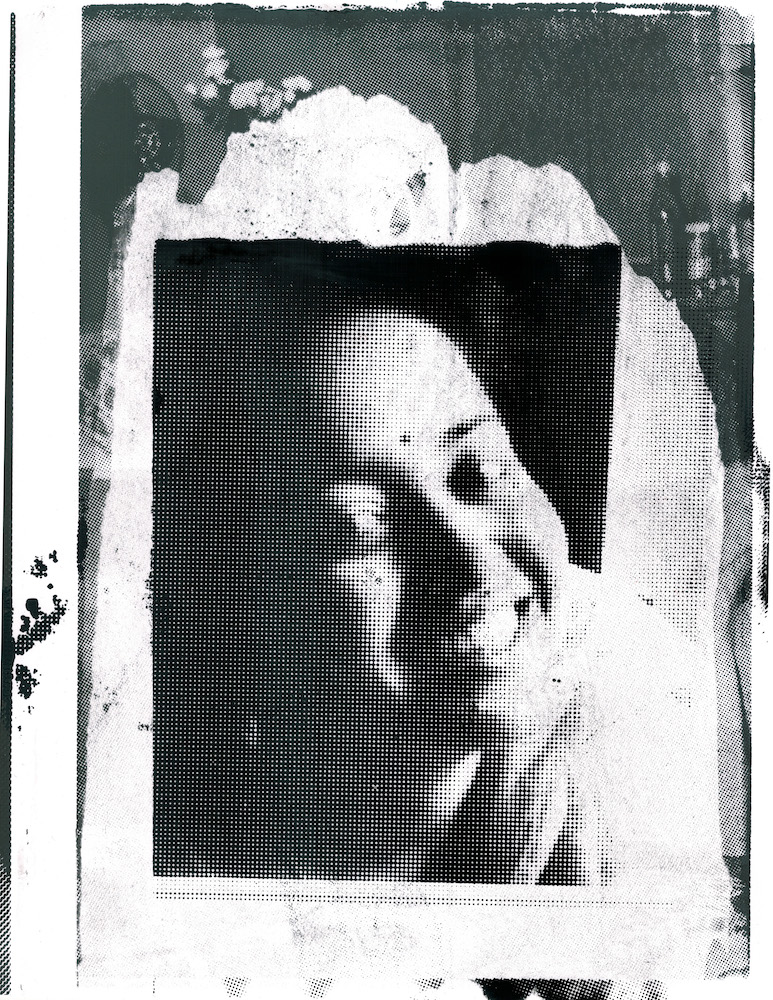 In an attempt to reconcile with this uncanniness, Mukherji fixes her mother across multiple archives, from momentous occasions in the family album to the walls of a brightly lit apartment, where she dramatizes instances of rest in her adopted home—arched backwards over a bar stool or poised in front of an overflowing work desk. Her mother (or the memory of a dream of her mother) inhabits these fabulative worlds, collapsing domestic geographies and spaces of gathering. In one particularly intimate moment, Mukherji is curled up on her bed, shutter release in hand, looking towards a window where her gaze meets a photograph of her mother in a small mirror perched on the ledge. Here mother and daughter intersect at last, in an ongoing search for resemblance against the reality of homes that are growing apart. These odd gestures of rest then begin—as with Carson’s experience of the living room—to evoke an imperfect likeness, discarding comfort for an uneasy sense of loss.

It is through these feedback loops of misrecognition and similitude that we start to notice the ways in which Mukherji performs a body visibly at home and, yet, jaggedly out-of-place. The description of violence and her mother’s acute loneliness rupture the initial tranquility of the work. It is unclear whether Mukherji, who appears across many mirrors (some literal and others implied) in this series, eventually finds a posture of resemblance that is at once affective, somatic and self-reflexive. The light outside does not then leave the home in darkness, but illuminates what is visible inside—by this half-light, the passage of a memory to a dream, or vice-versa. 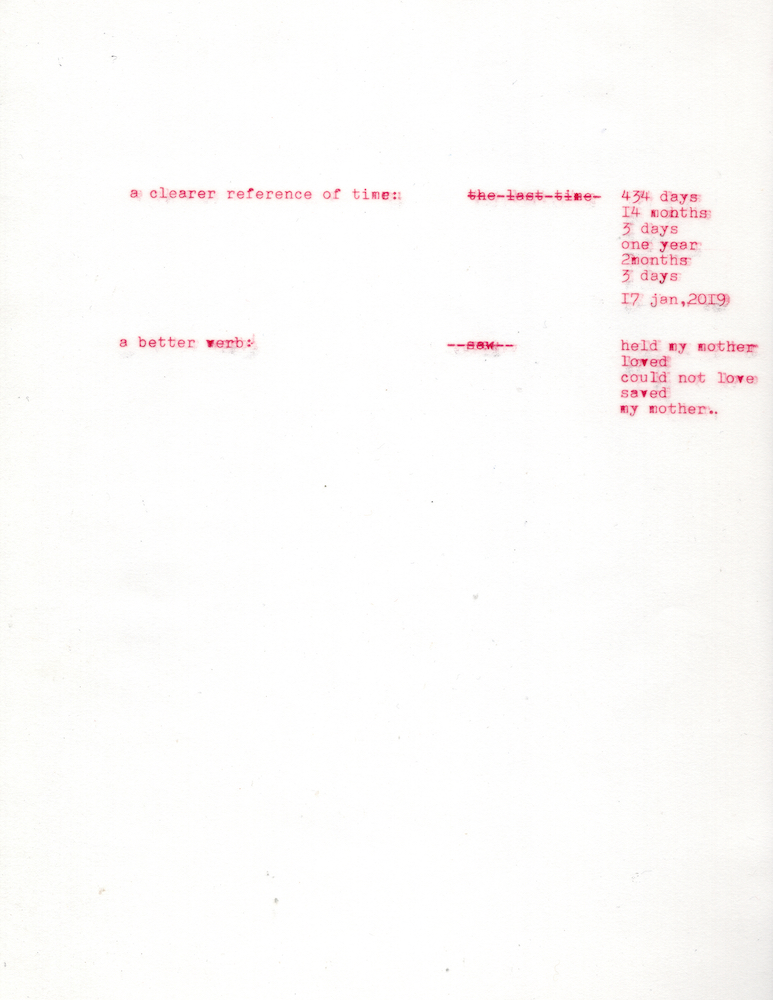 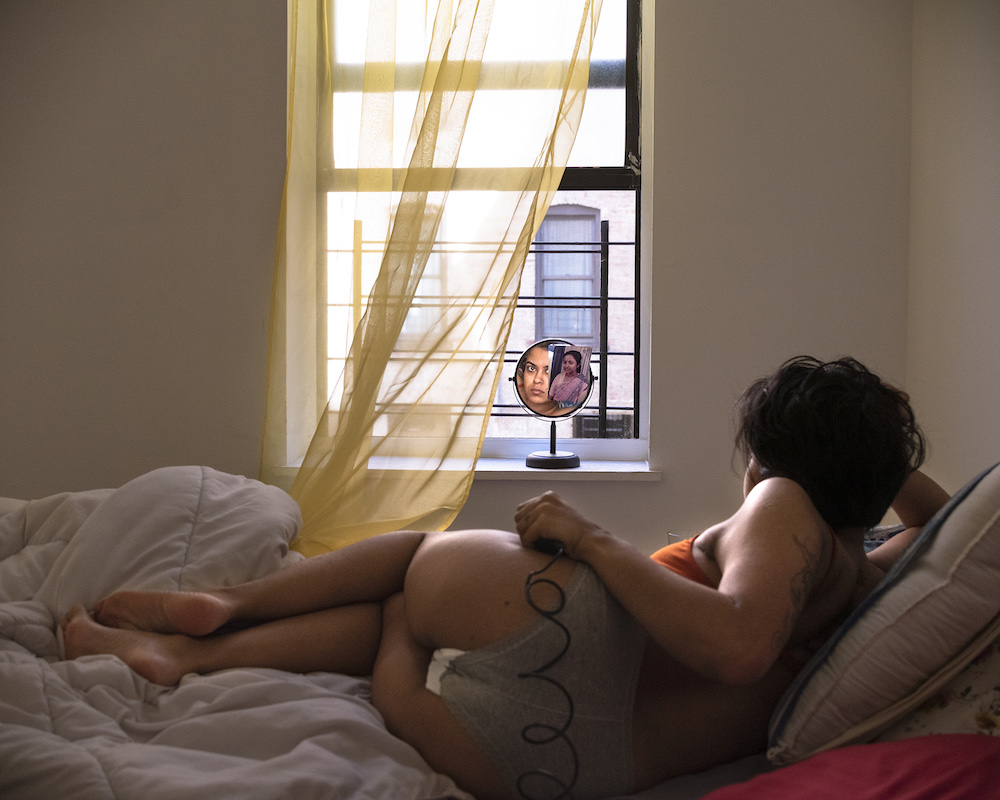 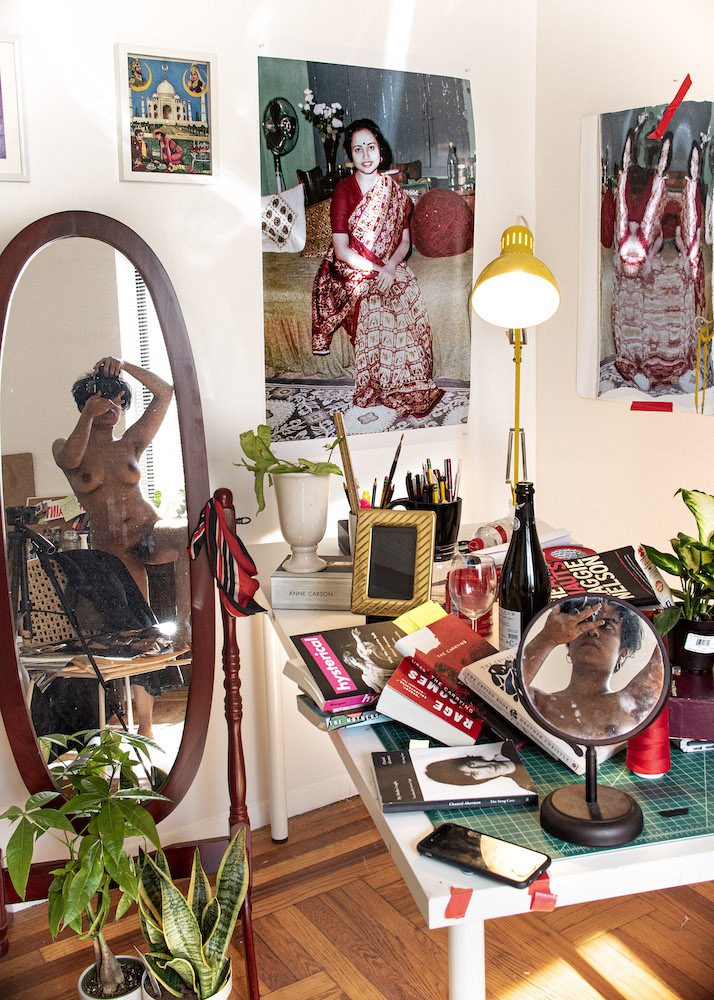 Cheryl Mukherji is a visual artist and writer currently based in Brooklyn, New York, working primarily with photography, text, and video. She was nominated as the 2021 Workspace Resident at Baxter Street at CCNY, New York, where she also hosted her debut solo exhibition in January 2022. Cheryl’s work has been exhibited at the National Portrait Gallery, Smithsonian (US), Minnesota Museum of American Art (US), Huxley-Parlour Gallery (UK), Format Photo Festival (UK), Brooklyn Museum (US), Museum of Moving Image (US), International Center of Photography (US), Serendipity Arts Festival (IN), among others. She has been the recipient of Capture Photography Festival’s Writing Prize 2020, Brooklyn Museum’s #Your2020Portrait Award, South Asian Arts Resiliency Fund (SAARF), Firecracker Photography Grant 2020, and was a finalist for the Dorthea Lange-Paul Taylor Prize 2020. Cheryl holds an MFA in Photography from ICP-Bard College, 2020.

Arnav Adhikari is a doctoral student in the Department of English at Brown University, where he works on postcolonial theory, the modern and contemporary novel, and visual culture with a focus on South Asia. He was previously an Editorial Fellow at The Atlantic and an Associate Editor at PIX. Adhikari was also Curatorial Assistant for the transmedia exhibition project Look, Stranger! at Serendipity Arts Festival 2019.