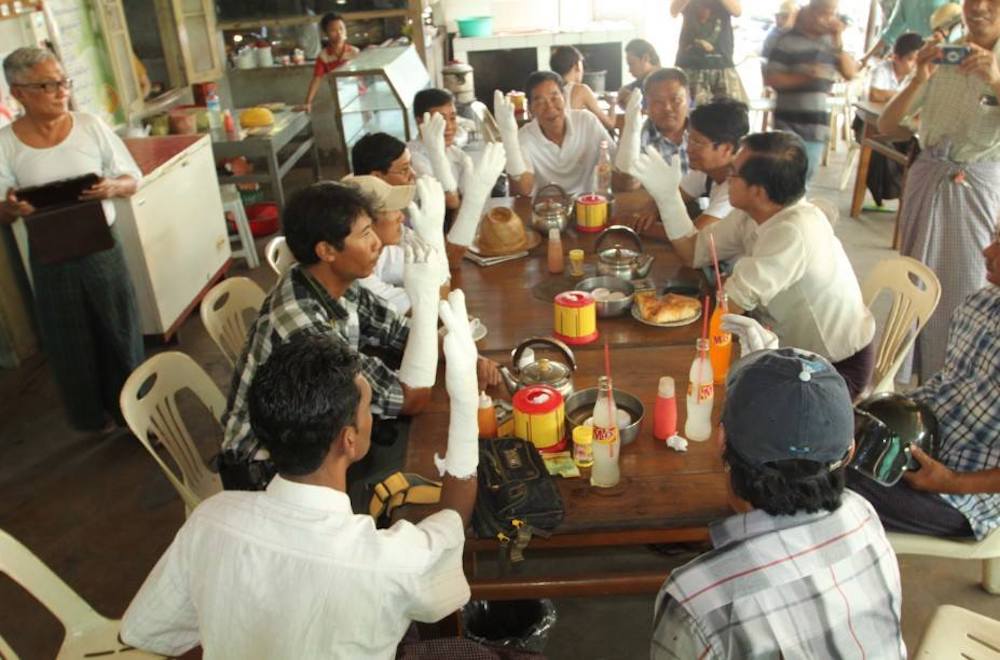 Visiting the Asia House in London in 2007, I came upon the work of artist Htein Lin, who had been imprisoned in 1998 for almost seven years on suspicion of organizing anti-government events on the tenth anniversary of the 1988 student-led uprising. The exhibition, titled Burma: Inside Out, showcased his prison paintings—a haunting, insider’s perspective, improvised on prison uniforms and stray pieces of cloth. It was a scathing rebuttal against authoritarian rule through autobiography.

His paintings depicted a tortured existence but also sheer resilience as he made more than 200 renditions during his captivity, and even thanked the guards when released. He later made a powerful installation at Yangon’s Goethe Villa in 2015, titled A Show of Hands, arranging an array of plaster casts on shelves—moulded from the hands of those prisoners he managed to locate after being allowed back into the country in 2012. All these impressionistic, cathartic artworks make us acutely aware of their resonance. A diasporic artist then, Htein Lin has since moved back to Myanmar and speaks about the current situation, from an outside in as well as an inside out perspective.

Rahaab Allana: Can you speak about the current moment in Myanmar and your role as an artist at this time?

Htein Lin: Throughout my life I have been practising as an artist, whatever the situation may be. I have tried to see in a positive way, to create something in order to reflect on what is happening in our society. There is a role that artists like me in Myanmar can play and that is why I joined the revolution in 1988 (named 8888). I spent four years in the jungle for the revolution, and then almost seven years in prison. I tried to remain productive in that negative situation. However, recently it has been very difficult for me to have hope, because of what is currently happening. After the military coup on 1 February 2021, the entire country tried to stand up and fight. They were ready to show how much they loved democracy, how they believed in an equal society. So much energy and effort went into it. But now, the military regime is cracking down hard and there is an overwhelming loss of the younger generation… they are dying, being killed.

The situation changes day by day, and the idea of an armed struggle changes with it. Of course, I was like them when I took part in the 1988 uprising. I believed that armed revolution was the best way ahead. But we have now had almost ten years of democratic change. People do not want to go back to outdated practices. When I see this generation, it is like seeing my younger self. They do not really understand how these weapons and an armed struggle can also be dangerous. The power of the weapon can destroy your mind. The idea to replace the Tatmadaw (Myanmar army) may sound good, but it is really very challenging.

RA: We read in the newspaper over here about how the poets in Myanmar are being attacked; the artists are also out there in the protests. In 2007, I saw your exhibition, titled Burma: Inside Out, which showcased your prison paintings at Asia House in London. What has changed and how do you feel about the role of art now?

HL: I always try to reflect on what happens in society, but this is the most dangerous time for practising the freedom of expression in Myanmar. You may have heard that the well-known poets K. Za Win and Khet Thi got shot. Also, many poets and artists are imprisoned—Eain Myu Nyein, Maung Yu Paing and others. Myanmar’s poets—who are a powerful force—joined the Saffron Revolution in 2007, which happened after the removal of subsidies on fuel. The Contemporary Artists’ Association and Poets’ Union were really active during the recent demonstrations. But now, they are more and more on the run. It is challenging. It is like they are fighting with poetry.

RA: I remember reading one of your other interviews, in which you talked about the early 1990s—when you were on first the Indian and then the Chinese border of Myanmar. As you mentioned, you had joined the armed struggle. It really struck me that at the time you were hoping for some kind of intervention and help from India, which never came. And yet again, we now see this with India being unable to help with the Rohingya situation. As someone who has lived abroad, what do you think the international community of artists and poets can do for Myanmar?

HL: I have seen a lot of statements from international organizations and governments, and also lots of solidarity from the international artists and writers’ community. I really thank them for all the solidarity. But the situation is not simple and we have a very long struggle ahead. There are international political organizations, and there is our community of writers, poets, social activists, artists, etc. As an artist, I have more faith in the power of solidarity from the global artists’ community than in international organizations. I am also grateful that civilians from different countries are showing their support, their loving kindness as well as wishes and prayers for people in Myanmar who are suffering and fighting for democracy. Here, what I mean by “global” is just the ordinary people who are supporting us from all over the world. So, I hope artists’ communities and such ordinary people continue to show solidarity and speak out, so that these “international” organizations and politicians keep their promises to provide help.

RA: What do you think about building institutions in the future?

HL: There are a lot of people in prison, lots of people on the run, and economy has gone down. But there are achievements: the biggest one is that this generation is different, and they are trying to understand each other more. They are also from different religions and ethnic groups, and are thinking about minority rights. I feel it is a good thing for our future as a democracy and as a federal state. Now our country has got a disease, so we need to take the appropriate kinds of medicine. If you have a disease, you cannot refuse the treatment. Whatever international organizations say, we have to face this problem ourselves, and we have to survive.

RA: When we see this moment, we think about 1988. And then, we can also think about 1998 with references to your own personal history. How do you think this generation is looking at this present moment?

HL: This generation is really smart. I mean, Generation Z —they grew up in the digital age. In the early days of the demonstrations in February and early March, I went out almost every day. I spent the whole time on the street, moving around with my bicycle and seeing how they were resisting and supporting one another. I felt so good when I saw them on the street. They were so independent, so committed. During 1988, I was a student leader in our village. Many others were dependent on my direction, as without a leader, they could do nothing. But this generation co-organizes. They work on their own as well as together. What we need to create is equal dialogue.

RA: I understand what you are saying, and it is also so relevant to South Asia. It is a story that, in different ways, is happening in Sri Lanka, in Nepal, in Pakistan.

One of the last things I would like to ask—I remember you had joined the All Burma Students’ Democratic Front (ABSDF) at one point of time. Could you describe that moment?

HL: During the ABSDF years, we were fighting for what we strongly believed in. The worst thing during that time was that we got training, we had weapons, but the weapons made us crazy. This is something I am really concerned about now. When there is a power struggle, people can kill each other, torture each other, and destroy our own image. It was a scary moment in the history of revolution. In 1992, as a consequence, six student leaders were executed brutally and many others died. We did not even speak about it for almost two decades. I only wrote about it in 2011.

Then recently, a few months before the military coup, a comic and graphic artist called Wooh wanted to publish a book about our experience. He asked my permission to allow him to create a comic book based on my Ma-Pa (Northern Branch) memoir. I agreed, because I thought it would be really good for the youth to learn from it—about how dangerous an armed struggle is. With what is happening now, this can be an important history book to learn from. We have to remember that we can destroy our enemy but we can also destroy ourselves.

RA: What is the way forward with using social media while the state is constantly trying to control it?

HL: I am really glad that Burmese journalists are still reporting, even though they are on the run. Theirs is the most dangerous job. Some of my old, close friends are journalists. It is like the 1990s, when they were working underground. But gradually, the situation got better and after 2010, laws were adopted and amended; but now, it is dark again! It is as though our room was full of light, and then someone came and flipped the switch—sudden blackout. But these journalists are experienced and they are still reporting for us. They stay and fight.

Htein Lin is a Burmese writer and artist—working with painting, installation and performance. Leaving Myanmar in 2006, Lin regularly participated in exhibitions and festivals globally, as well as events and projects to promote freedom of speech, particularly in Myanmar. He is a founding member of the Burmese language arts website www.kaungkin.com to which he contributes poetry, prose and artistic criticism. In 2010, Lin curated the first Burmese Arts Festival in London. He moved back to Myanmar in July 2013, and since then he has been working on a major documentary and participatory performance piece, A Show of Hands, capturing in plaster the arms of hundreds of Myanmar’s former political prisoners. 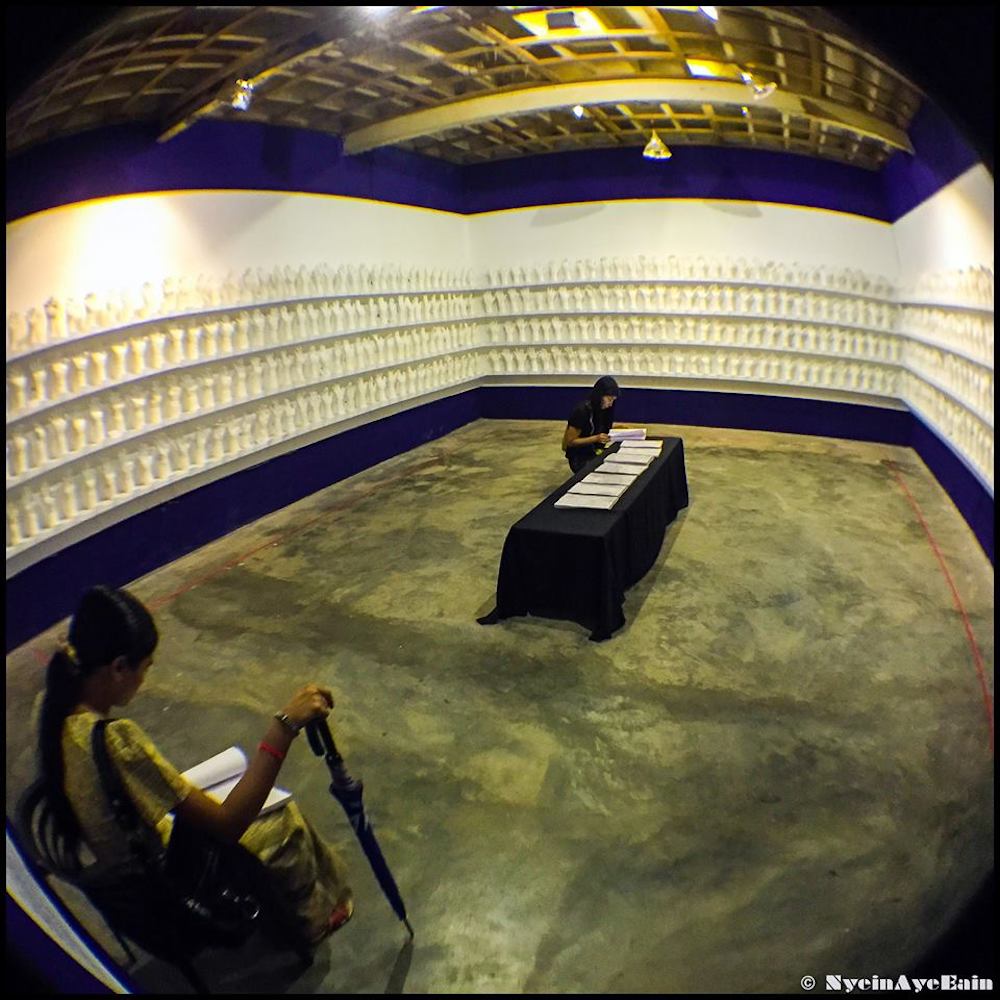