Rajat Dey’s work emerges from the anxiety of not knowing what must be wholly remembered. Taking root in the disintegrations of modern subcontinental history, Scissors and Glue draws on its intersections with the artist’s personal narrative. The series highlights how Dey’s family as well as his old house came to be fragmented and demolished in stages, eventually leading to his family’s exile from East Pakistan.

The project attempts to recover the loss of a cohesive past with creative acts of screening, superimposing, cutting and pasting. The work of memory is used as a reconstructive tool against the broken, unstable ground of history in order to engage with the narrative of an emergent, new life. Recalling the playful and nostalgic form of collage, Dey’s constructions attempt to paper over the traumatic and fragmented dimensions of the past with fantasies of belonging. The artist does so in order to foreground a visible, habitable world. His images evoke the fullness of such worlds as they appear formally to our eyes, but the bodies of these visions are hollowed out—like empty suitcases or rusty, abandoned almirahs. They are unable to promise that vital substance for securing fantasies: a holistic myth of origins that can anchor a familial identity to a place and time.

Some of the motifs that recur across his images point to a memoirist’s urgent search for a verisimilar past, frequently undermined by its counterpoint in fantasy. The objects that enliven these notions range from suitcases and cupboards to globes suspended in space; they seem to be promising a new world, perhaps waiting for the vital, life-giving touch of a newborn. Children, surrounded by images of other children, heighten an anxiety of being engulfed by mass-produced fantasies of innocence and culpability. We also see parts of unfinished structures, including buildings as well as bodies. A fragment of a photograph is hidden partially behind a curtain, as if waiting for the dramatic revelation of the other, conjoined half. These fragments evoke the indelible power of the material trace that can become a repository for the violated memory. However, the “unknown pieces of memory” that Dey works with eventually fall into a rut—much like a ventriloquist’s readymade routine, revealing the hand of the puppet master, but not the climactic punchline.

Dey, in his work, makes references to early modernist practices of visual experimentation. This includes Pablo Picasso’s papier collé works that referred directly to the trauma of Balkanization in Eastern Europe, which resulted in the First World War in 1914. Another influence is the Blue Rider group—which was formed by a number of Russian émigrés in exile—who were led by Wassily Kandinsky. They sought to provoke a spiritual awakening through their empathetic use of abstraction. More locally, Dey’s images refer to popular iconic monuments—like the Victoria Memorial in Kolkata—that can serve to anchor a newcomer’s sense of place in their city. Images of popular, iconic edifices like these reflect a desire to fit into an ecosystem of prefabricated self-images for a new community. However, the safety of this anchor is subverted by the threat of disappearance—of one’s self or even the city as we know it. There is the possibility of one’s sense of self being dissolved by the generic context produced by a public structure that is used indiscriminately by thousands of people every day as a “background.”

The tension between the urge to synthesize and acknowledging the frank reality of rupture enlivens the new constructions that Dey formulates in order to project his performance of memory. This allows us as viewers—as veritable participants and inhabitors of these worlds—to think of his images, especially given their saturated, mass-produced quality, as materials to create a new being that is in the process of transforming. In The Art of Assemblage, William C. Seitz writes, “Every work of art is an incarnation: an investment of matter with spirit.”¹ It is the reincarnation of this new spiritual identity that these intensely material images bear witness to. 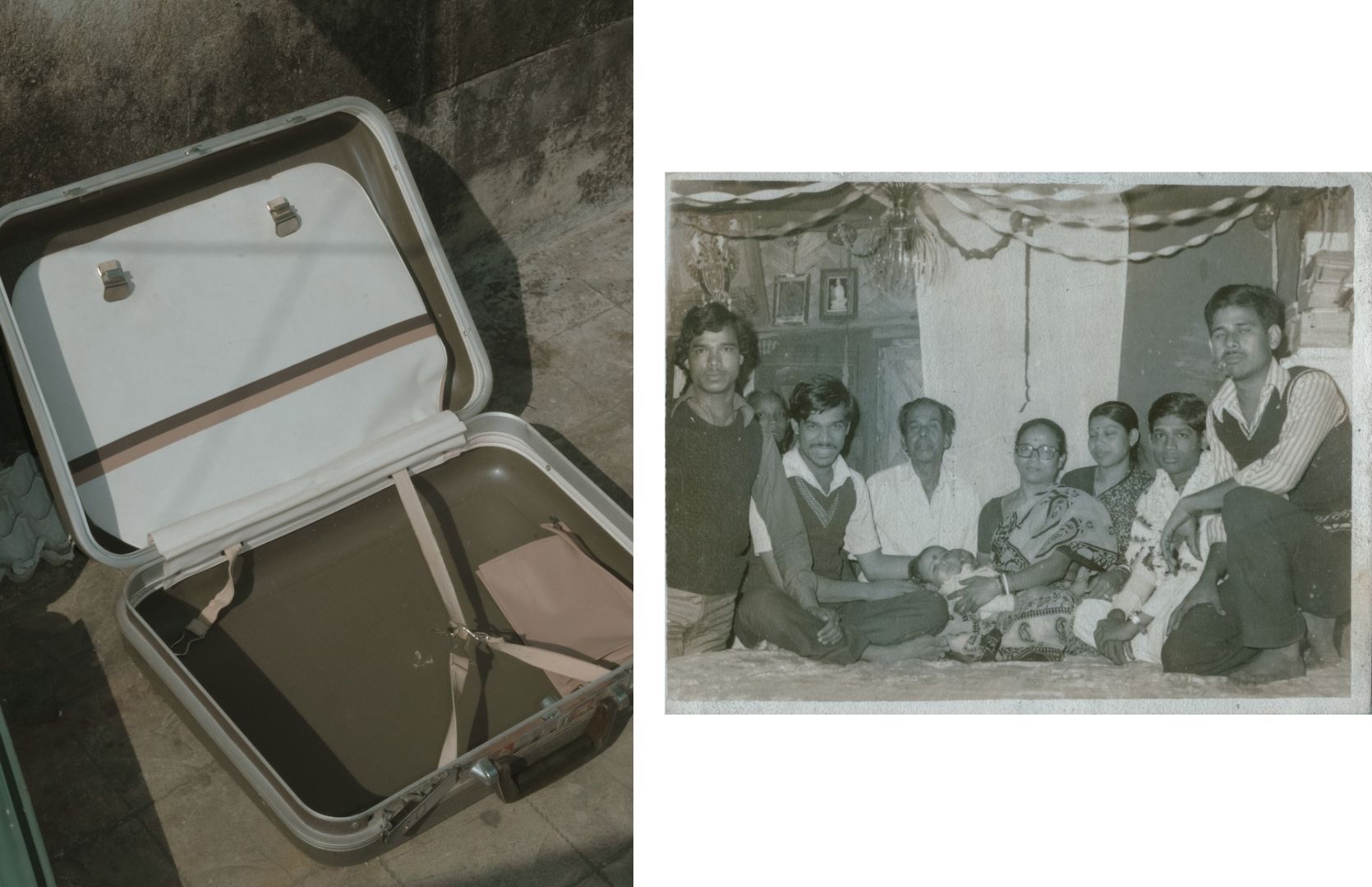 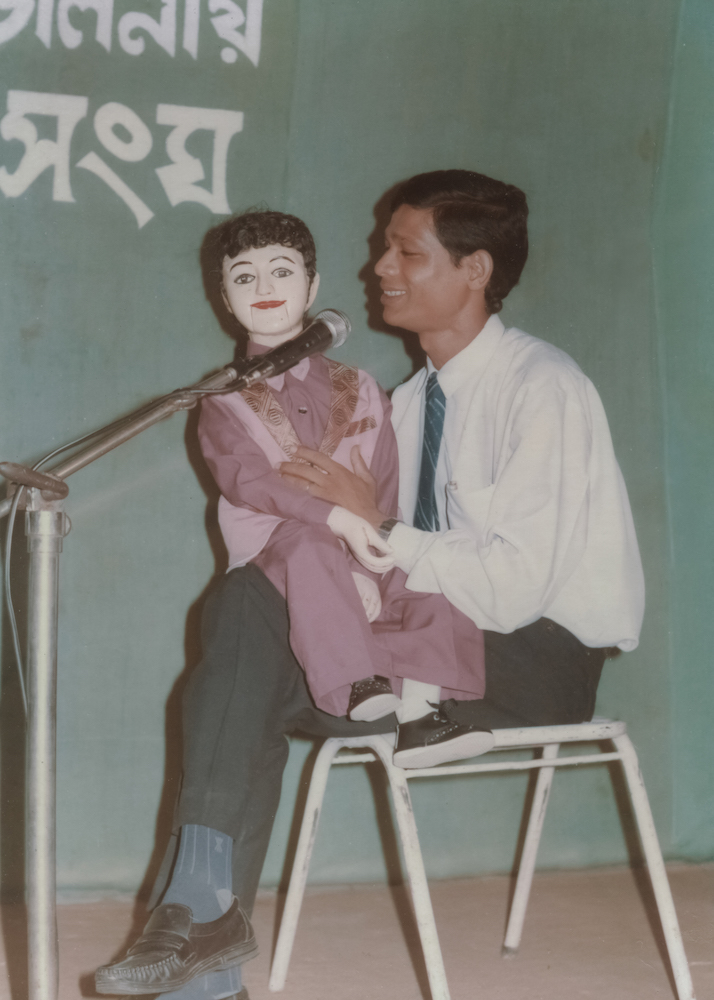 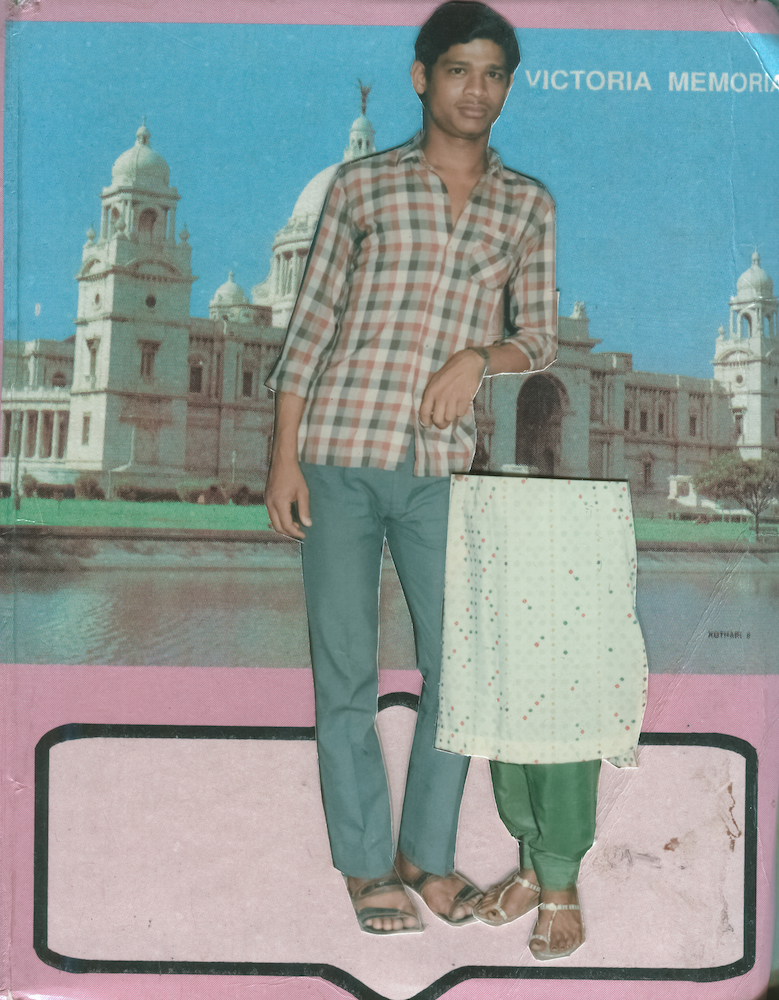 All images from the series Scissors and Glue, Kolkata, India, 2013–20, Digital, film and scan collage. Images courtesy the artist.

Rajat Dey is a Kolkata-based photographer and has been working on a project on his home and his lost roots in Bangladesh (erstwhile East Pakistan). He attended the Angkor Photo Festival Workshop in 2019 under the mentorship of Katrin Koenning and Sadia Marium. Dey likes taking photos of things people would not ordinarily spare a second glance.

Note: This project was made possible through the support of the Experimenter Generator Cooperative Art Production Fund 2020-21.

Ankan Kazi is a writer, translator and PhD scholar at the Centre for English Studies, Jawaharlal Nehru University. His writings on art, literature and culture have previously appeared in The Wire, The Caravan Magazine, The Indian Express and Jamini. He is also a contributing writer for ASAP Connect, a platform for critical writing on photography and lens-based media in South Asia. 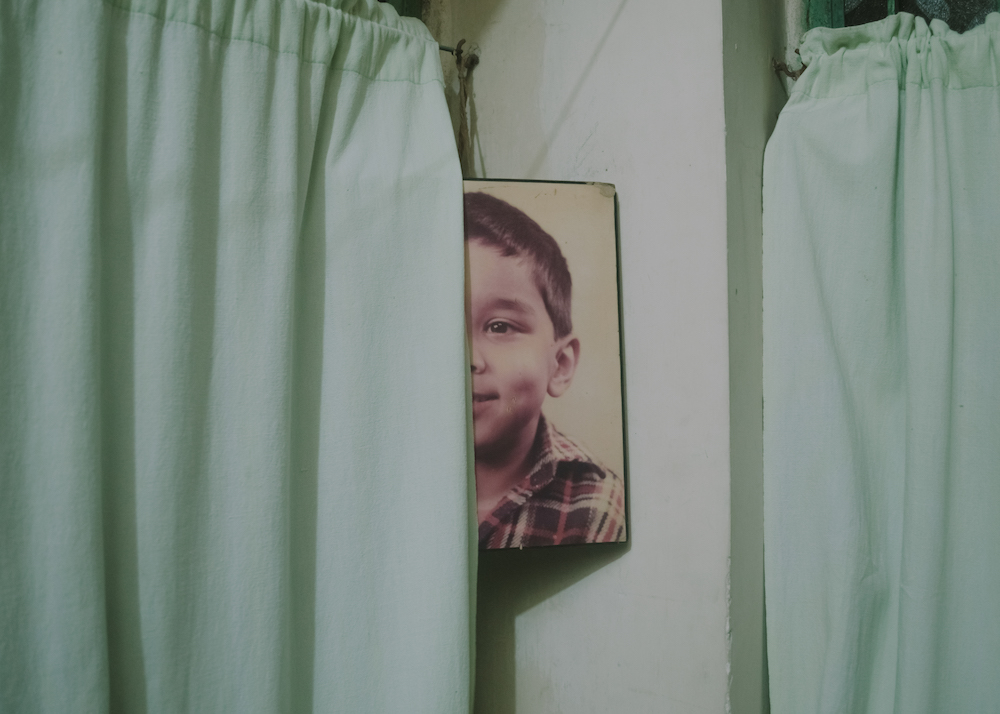