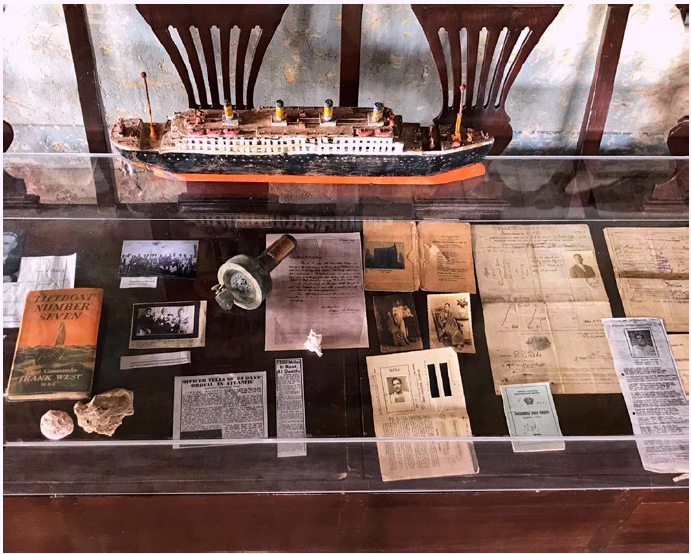 Exhibition view: Through Family Eyes as displayed in the Salon of the 400 year old D’Sa House. Aldona, Goa. December, 2019.

The village is the beating heart of Goa. Goans have a connection to their village seldom seen elsewhere, giving the answer to the question, “Which village do you come from?” a new meaning. Perhaps the reason harks back to the Communidad/gaunkari system, the topography of Goa as a collection of villages where landownership was collectively held. We are responding to one such village – the village of Aldona situated in Bardez in North Goa, a village of great wealth. The seed of the project came about from the desire to create a community-centric approach for GoaPhoto 2019. The festival consists of location-specific installations connecting photographic displays and their architectural contexts, many times in people’s homes. It was important for us to see Goa as more than a pretty location, but also recognise the Goan village as a point of cultural creation and dialogue. The idea of Aldona Through Family Eyes is a circular exercise of mining family archives and other non-formal archives for oral histories, artistically interpreting the material which is then designed into an exhibition to be shown in Aldona itself.

Of course, as widely understood in many cases, family albums tend to be constructed as the “idealised family”, marking mostly happy occasions such as births, weddings, special occasions, holidays etc. It was interesting to record the oral tellings of these albums, the reading of these photos both individually and side by side when placed in an album to be viewed together. We found that there was usually a “memory keeper” in the family, who kept all the photos and memorabilia. This memory keeper was almost always a woman. We explored how meanings of the photos change in their telling, in the act of touching the physical photo, the act of remembrance when someone says: “my father was a gentleman.” We also met people who didn’t like looking at old photographs and preferred to live in the moment, finding the pictures difficult to look at. 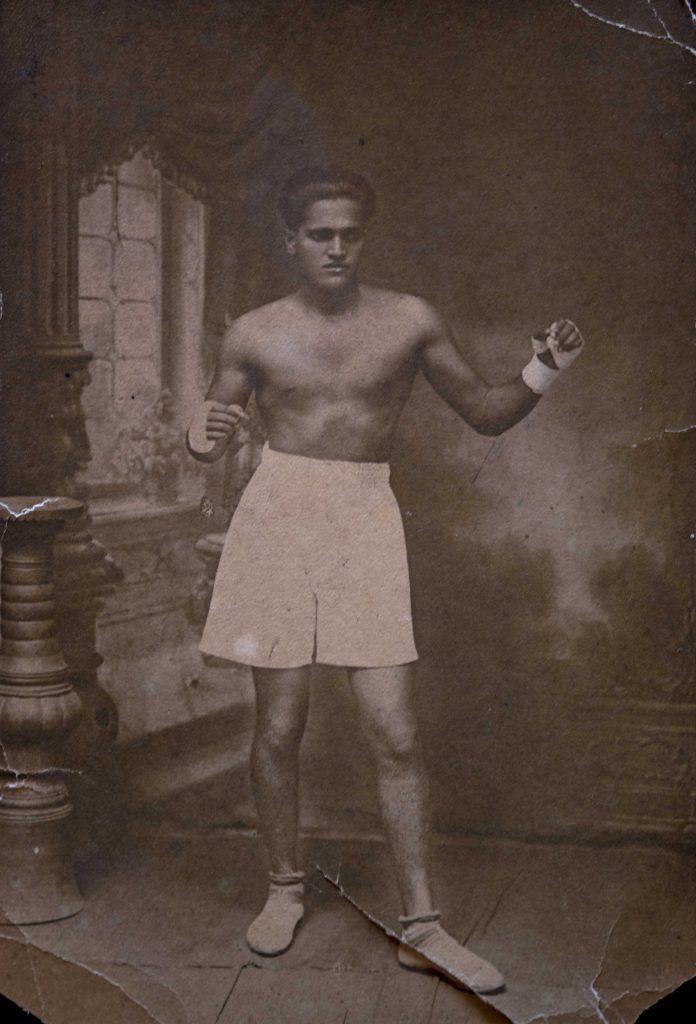 Mr D’Sa as a young man adopts a boxer’s pose at the Reis da Costa (Artista, Fotografo Premiado) in Mapusa town. From the Collection D’sa/Condillac Family. 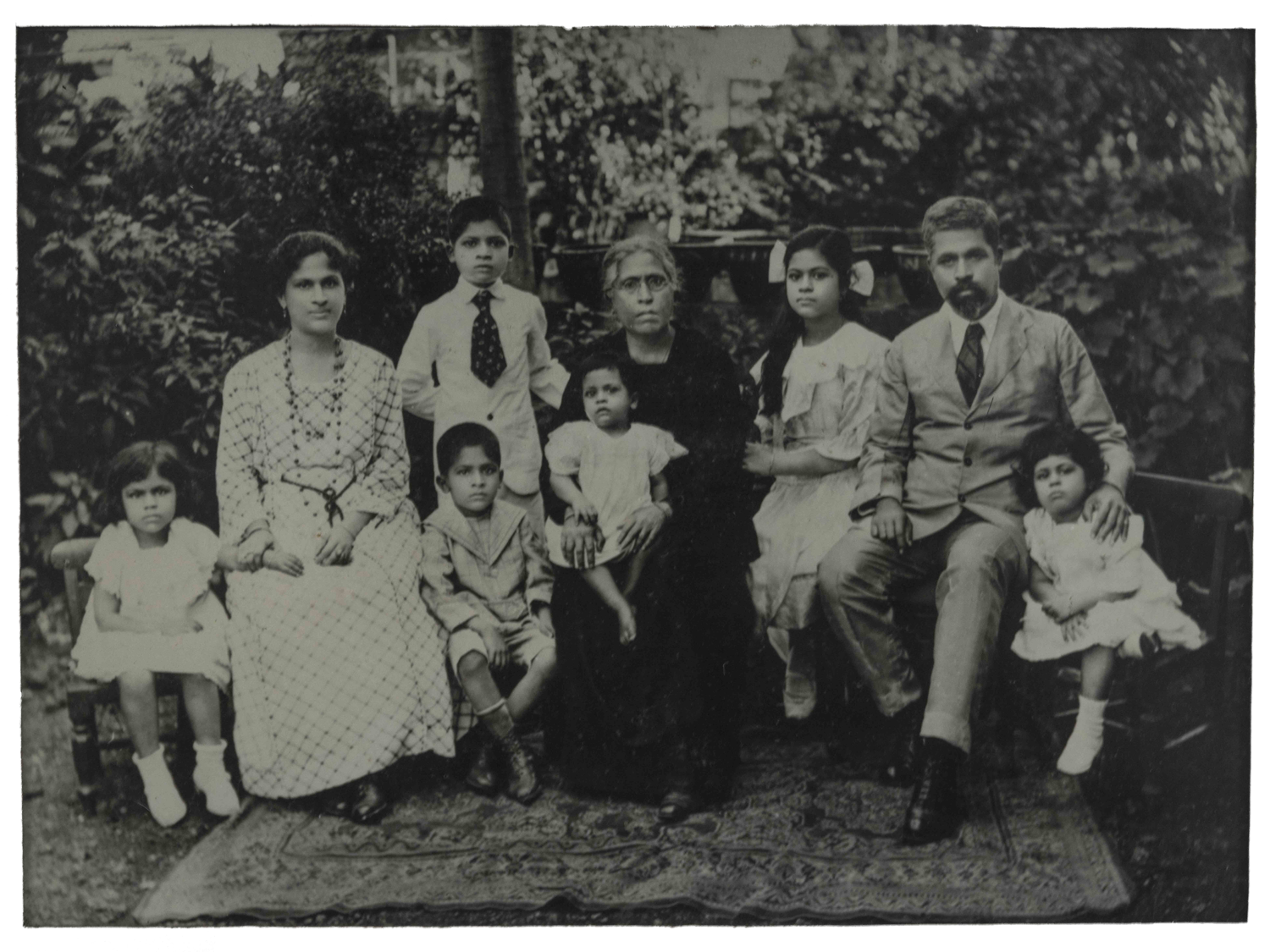 Family portrait in the garden of the residence in Mapusa. Early 20th century. From the Archive of Maite Elvino de Souza.

We can speculate on contextual frameworks since it’s a collaboratory exercise with many stakeholders. I prefer to feel my way through something and perhaps a context will make itself seen or many contexts will appear, depending on how the images are read. The oral history section of the exhibition is designed to give information, in a format similar to a museum. The second part is an artistic interpretation by me and Portuguese artist, Angela Berlinde, creating new imagery. I artistically interpret those vernacular images and create new imagery, using the archive alongside domestic objects and family memorabilia. Berlinde (who is also a researcher on contemporary visual practices that problematise hybrid forms of photography, such as painting and literature) also intervened in the images by creating new painted photos. She held a workshop for children of Aldona, who are members of the Alban Couto Reading Room for Children.

Before I forget, there was also an exhibition of artist Ana Janeiro’s work, Album India Portuguesa 1951-1961, where she interprets a family album of her grandparents’ time in Goa Portuguesa between the 1951–1961. They came to Goa in selfimposed exile to escape Salazar’s fascist dictatorship. Using more pictures from the album, re-staging them, and developing them through a set self-portraits of performances. Janeiro has never been to Goa before. 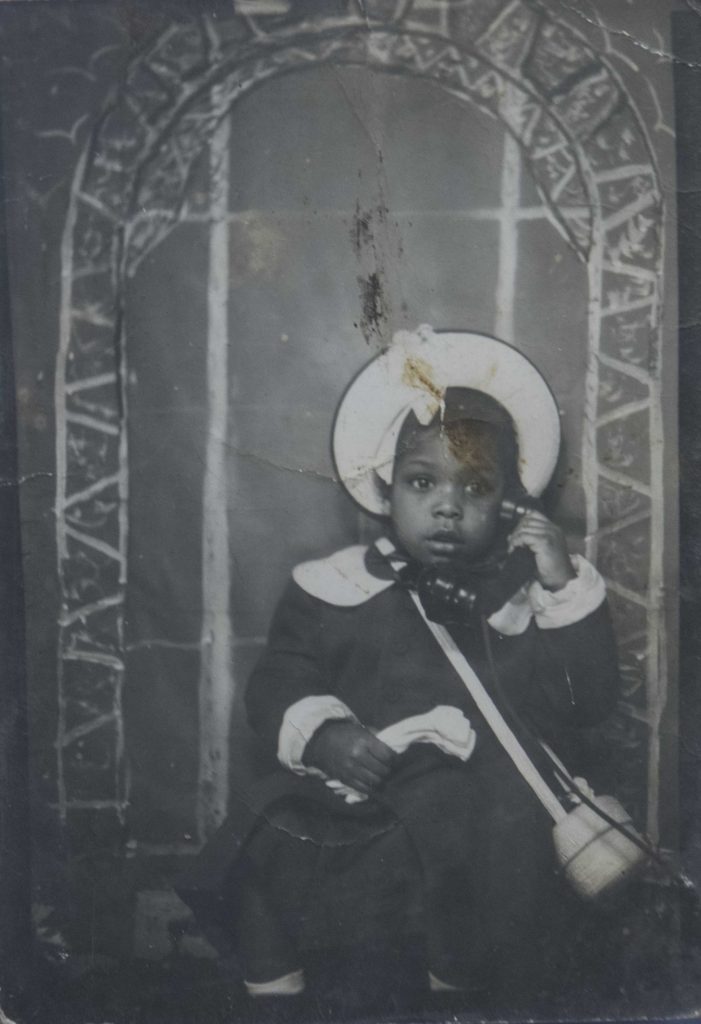 Child unknown. From the archive of the D’sa/Condilac Family.

The research was conducted in collaboration with both human and “non-human” actors as it were. These actors included photos, their owners, artists both Goan and Portuguese, and eventually the visitors to the exhibitions. We wanted to create a methodology to record insights into differences in the production and uses of, and into meanings given to, photos in Aldona and perhaps beyond, if the exhibition travels. I mentioned earlier my distrust of conceptual frameworks, but I needed to collaborate with someone to create methodologies to guide the project. This is because the meaning of pictures depends on their context. In the words of art historian Hans Belting, “They migrate across the boundaries that separate one culture from another, taking up residence in the media of one historical place and time and then moving to the next, like desert wanderers setting up temporary camps.” Hence more the context we present, the greater possibility of finding meanings. I have been working with Portuguese anthropologist Pedro Manuel Pombo who is presently engaged with Goa University, on informal family archives that are explored through a recording of oral histories, collected regardless of the holders’ social and religious background; the idea of artistic practice as research or the other way around. We matched in our fascination. His interest in Goan migration and diaspora groups in East Africa brings specificity to the interviews. The resulting exhibition was tied together textually by his readings of oral histories.

There are many but I’ll discuss one particular episode. We met with a journalist in Goa who belonged to Aldona. Melvyn Mesquita was curious about his grand uncle M.L. Mesquitta of Ranoi, Aldona who had died on a passenger ship SS Britiannia in 1941. He was eager to find out if there were any survivors. Melvyn has pieced together many parts of the jigsaw. He has traced some photos of the survivors who managed to reach the Brazil coast, after twenty-three days at sea, the ship having sunk some hundred kilometres off the Dakar coast! As in other stories, the accounts that mostly emerge focus on the European side of the tale. The Goans (and other Indians involved) are overlooked from this narration. But this is indeed a story affecting many people in Goa as well. It’s a fascinating chapter on the trying times of Goan migration. Melvyn’s sister, Sandra, and her husband Nick Burby have been following the story in Gosport Hampshire, UK, where a survivor of the S S Britannia, Vice-Admiral Sir Ian McIntosh, helped add some more pieces to the six-decade old jigsaw puzzle. They found Luis Albino D’souza from Ranoi in Aldona who was onboard the same lifeboat and had survived. We visited the family. He had died in the ‘70s, but had left behind a rich archive of stories, photos, and documents. The local bus shelter in the village is dedicated to him and his wife. Even a Mando (Konkani musical form) about the sinking of ship was unearthed, which was sung at the feast of the local chapel.

Akshay Mahajan is a photographer, curator, and writer based in Goa. His work comprises of self-initiated research projects that combine his interest in myth, folklore and photography as a mirror to culture and collective memory.

Akshay Mahajan was the guest co-curator for GoaPhoto 2019 The 2019 edition was co-curated by Lola Mac Dougall, Founding Director of GoaPhoto. www.goaphoto.in 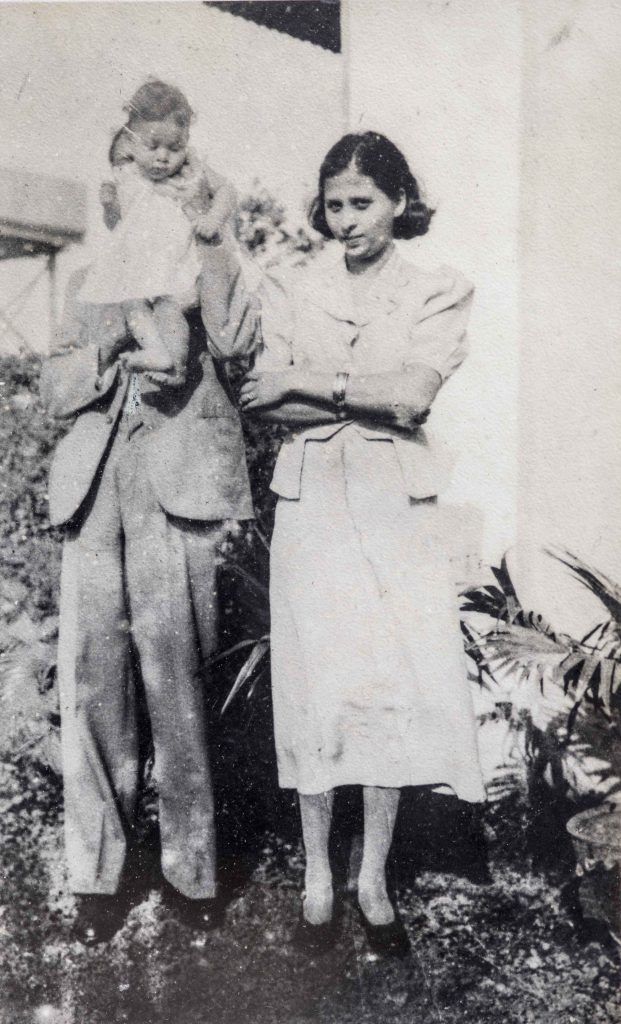 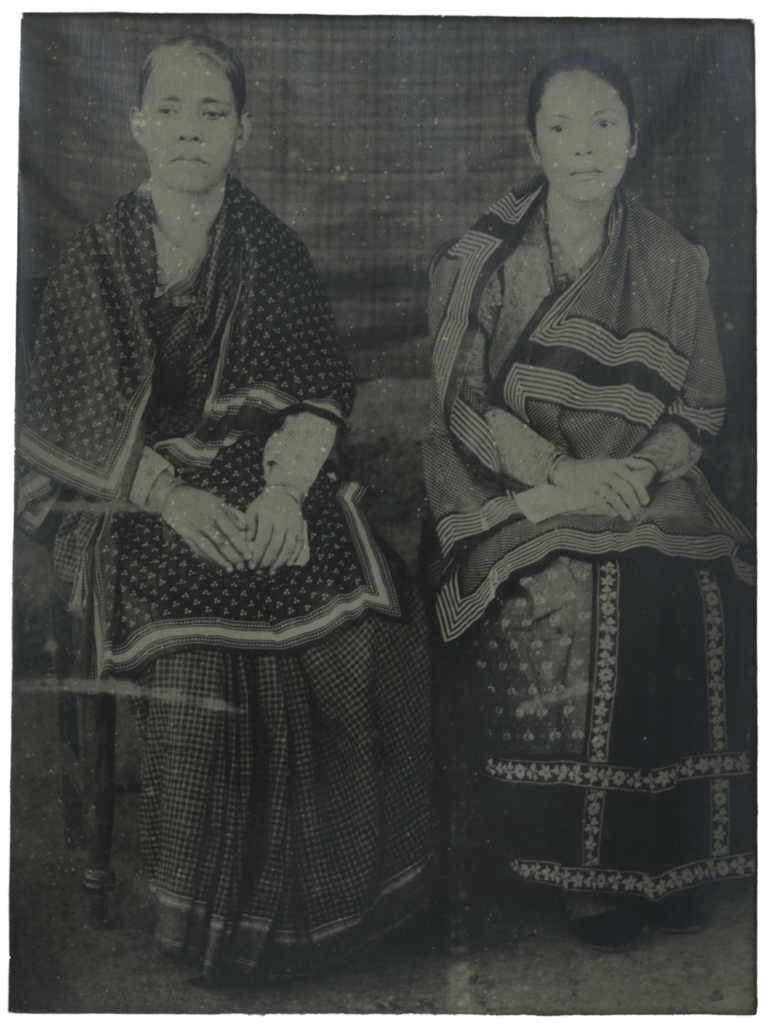 The maternal and paternal great-grandmothers of Maite Elvino de Souza strike a pose in their Pano Bhajus. The pano bhaju is a blend of East and West, a combination of many influences in colour, textiles, jewellery, and accessories. Although the lower garment is essentially a variation of the sarong or lungi that existed in Dravidian culture, the blouse is adapted from the Portuguese loose upper garment, and its heavy embroidery in gold thread owes much to Mughal times. From the Collection of Maite Elvino de Souza. 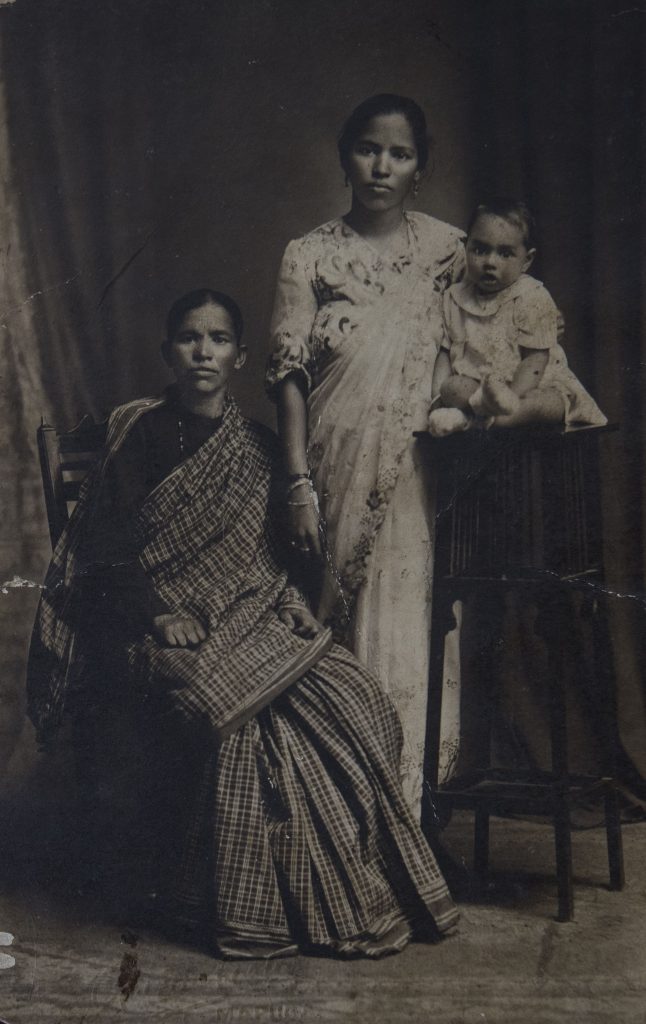 Albino D’souza with her mother and grandmother. Mr D’Souza, a native of Aldona, survived the bombing of the passenger ship SS Britannia, and survived on a lifeboat for twenty-three days under adverse conditions. 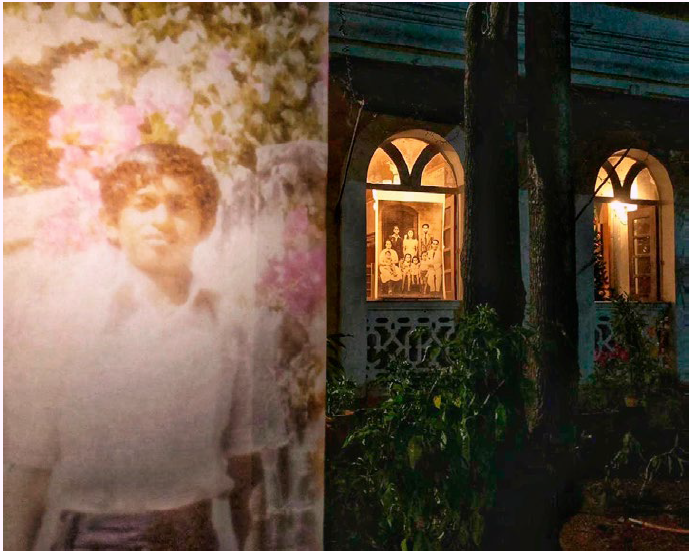 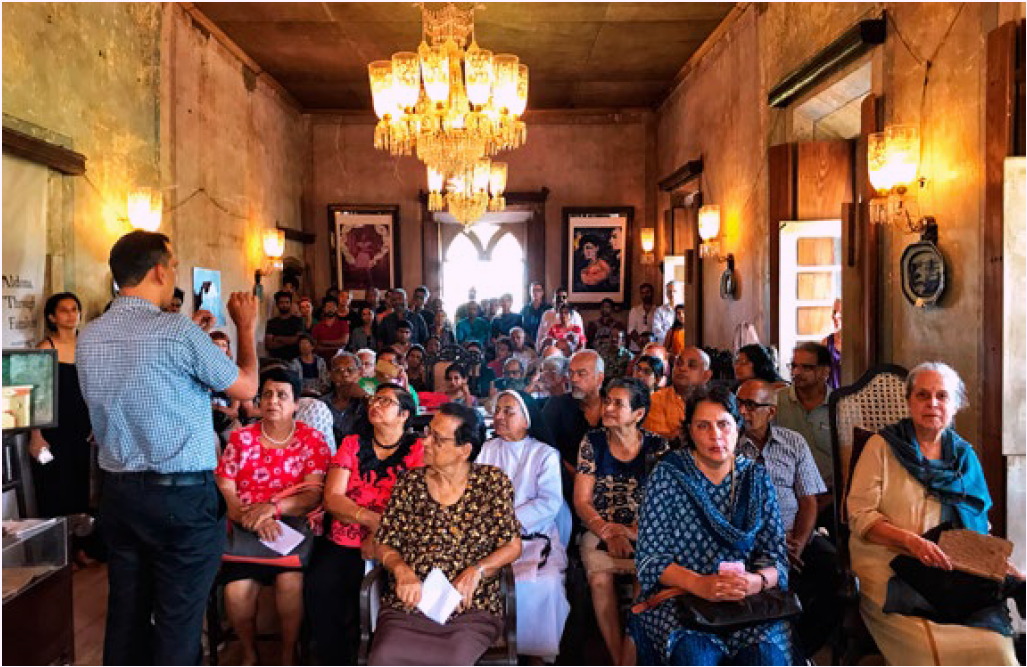 Melvyn Mesquita giving the talk “Uncovering a Goan story on the SS Britannia” at GoaPhoto. 2019. 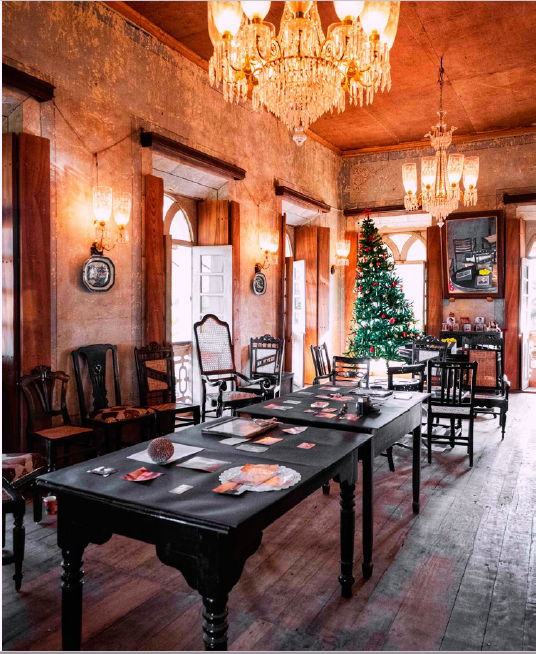 Exhibition view: Through Family Eyes as displayed in the Salon of the 400 year old D’Sa House. Aldona, Goa. December, 2019.