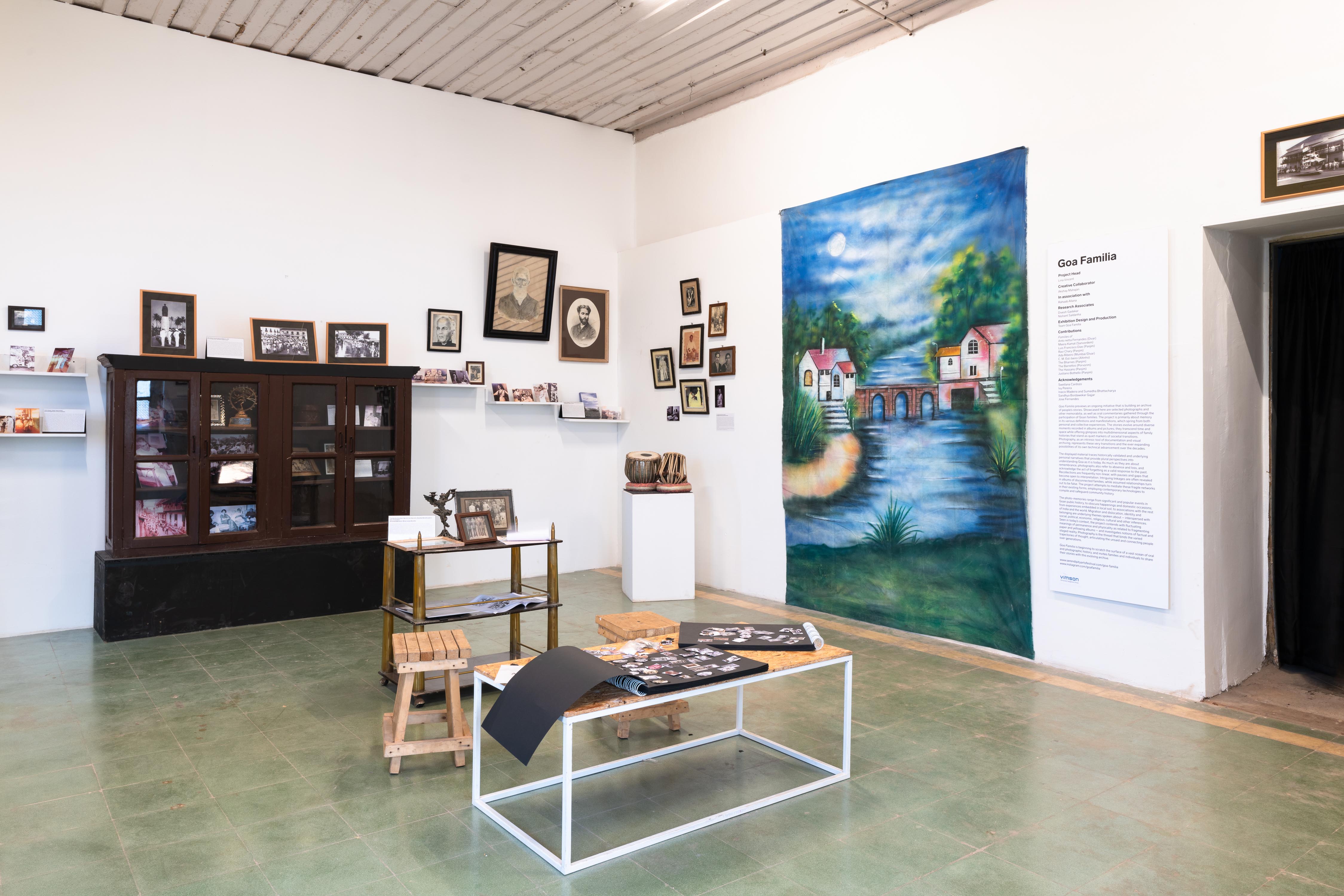 Family archives and their preservation are of paramount importance today. Given the fragmented and fractured lives that have become an inescapable part of the contemporary world we live in; migration, dislocation, and loss of roots have divided entire communities and is changing the way today’s generations perceive their pasts and look toward the future. In addition to this unsettling transformation, the technological revolution of a fast-paced, digitally driven world is far removed from the one that our ancestors inhabited and we may have now come to realise the preciousness of retaining memories.

When the Goa Familia project began in Panjim as part of the Serendipity Arts Festival, the objective was to help initiate an archive of people’s memories and stories, as reflected in photographic remnants and other memorabilia. These were meant to be personal and community accounts that underlie or remain undetected in comparison to dominant, conventionally recorded histories. It is therefore a layered project by its very nature, as family lives interpret and reflect social, political, economic, religious, and cultural timelines in extremely tangible ways. There is a dearth of accessible published material (in English) on the history of Panjim, and of Goa itself – much that exists is in Portuguese, and some in the vernacular languages of old Kannada, Konkani, and Marathi. Then again, in terms of recorded visual history, photography in studios or access to personal cameras was restricted to a certain strata of society. Entering this broad and understudied space as researchers and documenters, the Goa Familia team has now arrived at a certain methodology of contacting and communicating with families, and archiving material that they contribute either by the process of digitisation or by physical donation.[1] 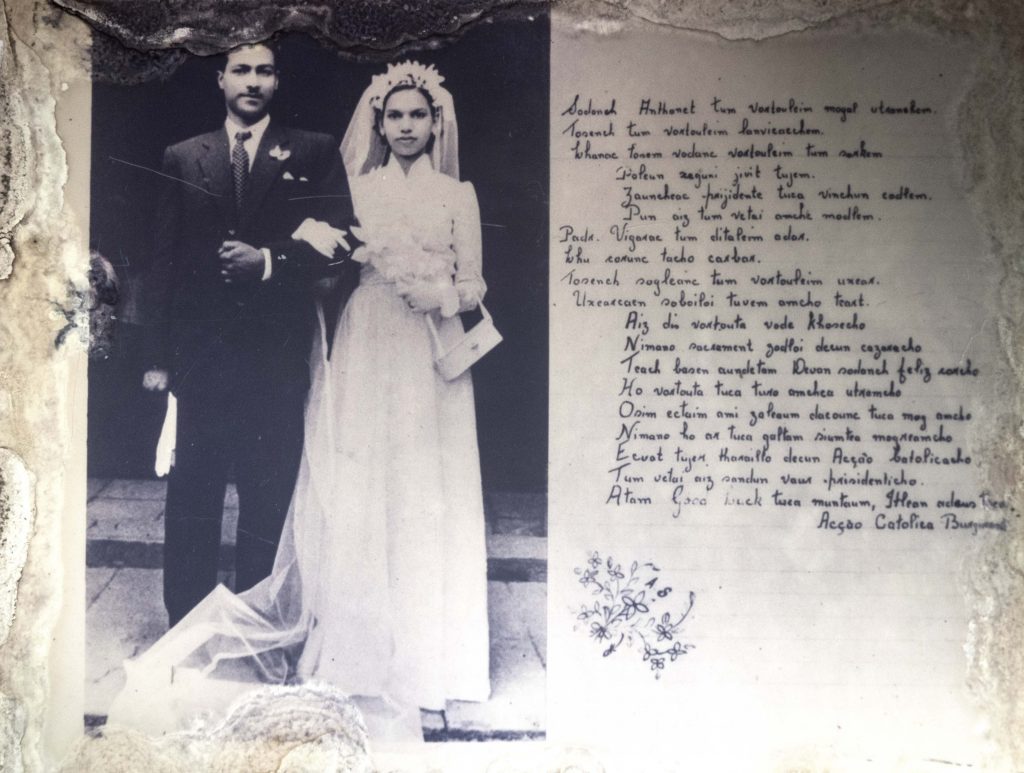 A life that spans three continents between Kenya, London, and Goa, Antonetta Fernandes, who now calls St Mathias village on the island of Divar her home, is pictured here on her wedding day with Bernard Mathias Fernandes. May, 1958. Basilica of Bom Jesu, Old Goa. Courtesy Marius Fernandes and Antonetta Fernandes.

Family albums are very private objects, and it takes time and trust for people to be willing to share them or make them public. Our experiences in reaching out to people have been largely positive, with only a few flat rejections given how sensitive these subjects can be. Usually, once the ice is broken, there is an enthusiasm to talk, a deep sense of pride in ancestral achievements, and physical associations with place, like land and architecture. The process is defined: after initial explanations and discussions about the initiative, a time is set for a video interview when the family or individual selects a series of albums or photos to talk about while they share memories. A few directional questions (sometimes aided by younger family members) help immensely in making the person comfortable, and allowing them to freely share their family history. With ten documented interviews now achieved, and several others in the pipeline, the Goa Familia initiative is just beginning to scratch the surface of a vast ocean of oral and photographic histories. The methodology differs slightly each time because the territories we enter and the subjects we encounter are diverse, and though we try to remain neutral and objective so as to gather information as it comes, it is always a challenge to gauge ethical parameters as we plan to make this archive and our discussions public over time.

Additionally, some of the people we are speaking to are octogenarians – and though they have long-term memories and strong opinions one may imagine that these have become embellished over time. The stories we have collected so far relate to families rooted or simply residing in Goa from several generations; while others may have migrated to different parts of the world and moved back. There are also families who retain ancestral homes but became “East Indians” living in Mumbai, and those who developed a greater connection with other parts of India. There are underlying experiences related to caste, class, religion, and segregations associated with political choices and sometimes conflicting recollections of the Portuguese regime. We have begun to notice some common strains in the retelling of histories and also realised how interconnected these archives can be. 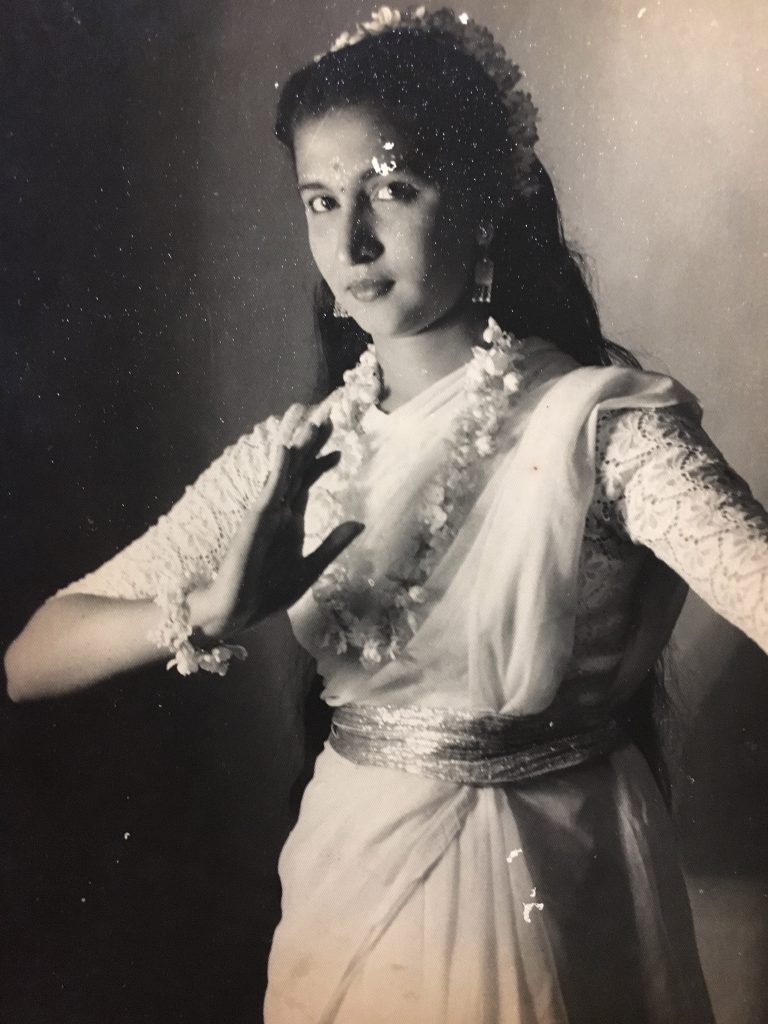 Mrs. Ada Ribeiro who was born on the island village of St Mathias, grew up in Dharwad, Karnataka. She specialised in Bharatnatyam which she performed across Karnataka and Goa and recalls her set at the first Independence Day celebrations of The Karnatak College in 1947. Photographed just before her performance in honour of Poet Bendre’s visit. Early 1950s. Dharwad. Courtesy Mrs Ada Ribeiro.

Photography has been central in channelling and preserving memory over the last 170 years in India; it enriches our knowledge of people, places, and events while we must also bear in mind notions of access, agency, redaction, and misrepresentation. As photos are infused with the power to transcend time and space, they also alter and complicate known hierarchies of social interaction by making visible: presences and absences, inclusions and exclusions of community life. We are forced to contend with fluctuating meanings of permanence and physicality as related to fragile paper, brittle negatives, and yellowing albums – and contrast these with experiences of today’s swipe-click-swipe culture of memory making, instantaneous opinion-making and the amnesia that may occur with the rapid pace of life. While we bear in mind such contingencies, we must also scrutinise the history of photography for its tropes and cannons. There are also considerations about “staging” – the quality in studio photos that included establishing identities of different sorts in slow processes, as compared with the carefully constructed and choreographed “identities” of present day visual story-telling with social media. Internally, we continue to dialogue about how memories can distort reality, how photographs can distort memory and furthermore, the concept of “reality” is in itself perpetually debatable. 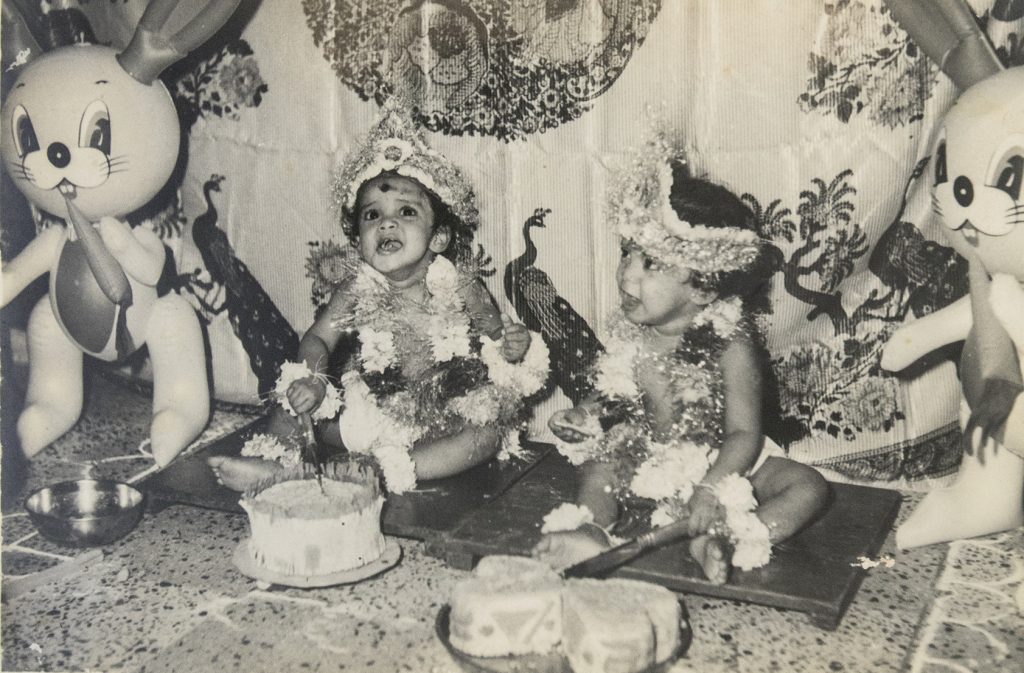 The Kamat Twins, Satyesh and Sarvesh dressed as Krishna at the cake-cutting of their first birthday celebration in Panchawadi on the 9th of May in 1972. Sadguru Photo Studio, Curchorem. Photo Courtesy Mahima Pai-Dukle.

Over time, we envision the archive to become a participatory space for people to contribute personal and collective stories that engage with noticeable binaries such as private and public, religious and secular, political and popular. We are reaching out publicly through an online open call and poster campaign; using personal networks and friends recommendations to locate interested persons, and the team is actively visiting shops, restaurants, family establishments, and other business spaces in order to cultivate interest in the project. Most people are very responsive to the idea that looking back from a digitally advanced time, as we now have the rare opportunity to safeguard objects and memories which have survived the passage of time. It allows us to examine perceptions of identity, autobiography, and belonging, by also engaging with the complexities of rootedness and/or dislocation and loss. These are emotional experiences that translate the past and present in interesting ways. A combination of oral records and physical representations in photographs also reflect subtle undercurrents of the times – an archive like Goa Familia will allow for these emotions and undercurrents to be relevant and meaningful in a larger social discourse.

Lina Vincent is an independent Art Historian and Curator with close to two decades experience in arts management. 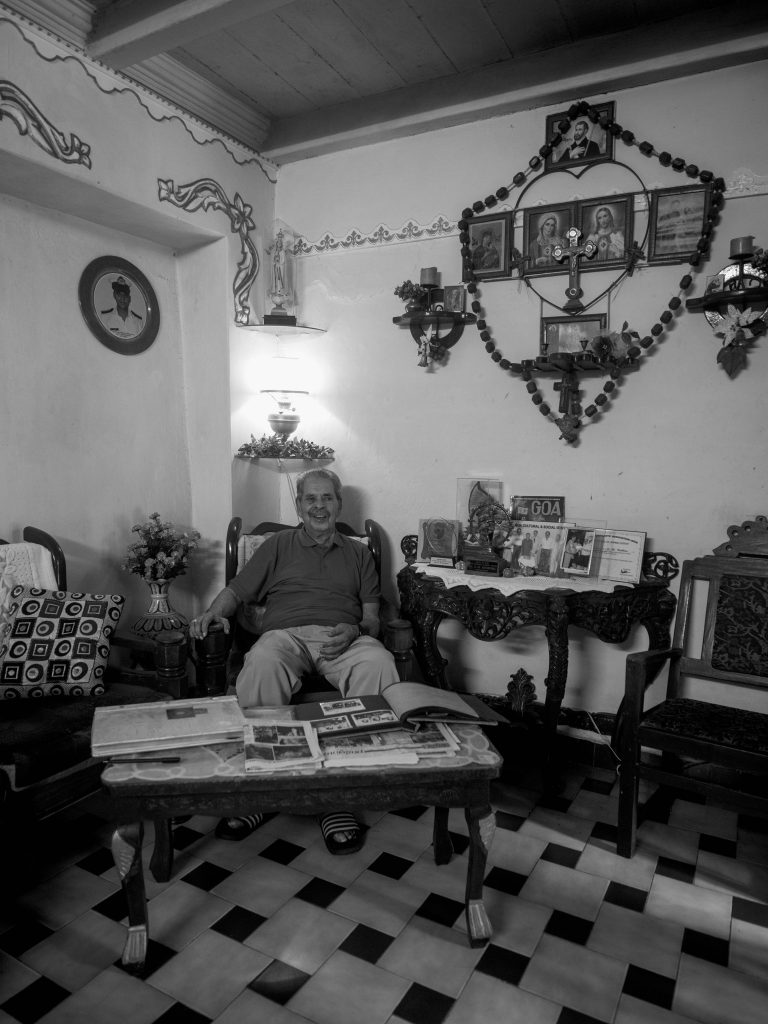 Mr. Custodio Manuel Estibeiro recounts his illustrious career as a photographer of political and social events, a composer of mandos, and the designer and executor of numerous carnival floats. Seated at his home beside awards conferred by the state and his old photos, many of which are widely used even today in publications and books. Estibeiro residence, Altinho, Panjim. 2019. Courtesy Akshay Mahajan for Goa Familia. 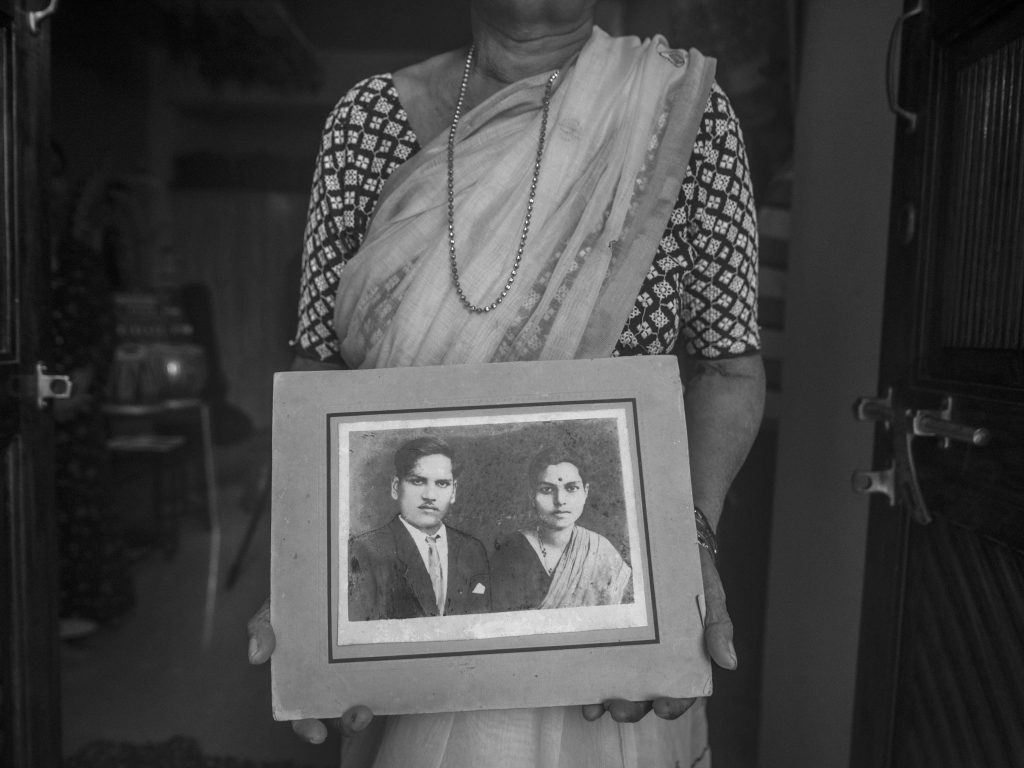 An old photograph of the late Pandit Prabhakar Chary and his wife, the frame held by Mrs Chary at her ancestral home. Chary residence, Altinho, Panjim. 2019. Courtesy Akshay Mahajan for Goa Familia.

Lina Vincent (@objectspeak) is an independent art historian and curator with close to two decades experience in arts management. The following clip highlights her role as the Project Director of Goa Familia (@goafamilia), an initiative that began in Panjim as part of the Serendipity Arts Festival ’19 (@serendipityartsfestival) together with Akshay Mahajan (@lecercle) as creative collaborator – with the objective to help initiate an archive of people’s memories and stories, as reflected in photographic remnants and other memorabilia. Images featured in this video may differ from the PIX edition. (Cover image by Yashna Kaul). Personal Paradigms will soon be launched digitally and made available on our website. Head to the link in bio to browse through our previous issues.