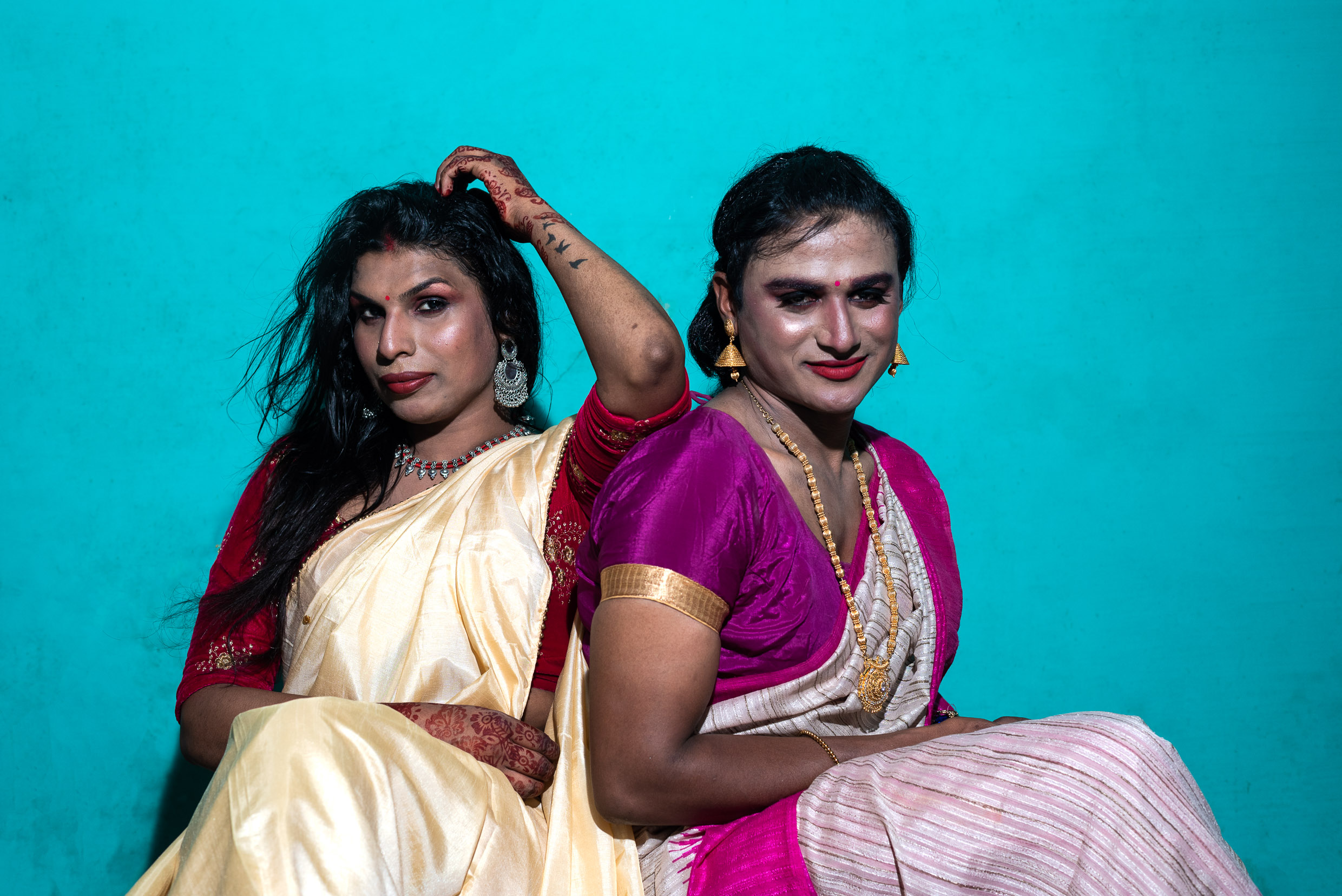 The 1Shanthiroad kitchen was taken over by Miya Shivaram – she was making Thalki Chicken – a recipe that uses a lot of smouldering red chilies. She called out to me, “Baby, where is the kadai?”I smiled and said I don’t look like your baby, she laughed and said everyone is “my Baby!”She was adopting and accepting me as part of the motley family of characters in her precarious life. My housekeeper, Mona was giggling and chopping onions in the small kitchen, participating in theatre of the absurd – where hierarchies and gender roles are turned upside down and there are no rules but only humorous role playing. We were all family, connecting through a space that is open and welcoming to anyone who wants to feel like a family and accepts each other for their differences without judging. The flavours of the chicken invited the other resident artists who relished it. This family was in flux.

The unit of the biological family is sacred and is central to the world view of many, and I would even say the majority. But, these traditional and conventional structures have been dismantled to create new social bonds of friendships and intimacies that are beyond the majoritarian and heteronormative structures that exist in our unequal web of human interconnections .The new paradigms of the LGBTQIA fraternity challenges the idea of the biological family and reinvents an alternative community. The Family structures in contemporary India are changing and alternative families like the “Parivar” are subverting the structure by using the same terminology.

Sandeep TK met Abhishek aka Annamma, and seeing that relationship with the transgender mother flourish motivated him to embark on this photographic project. He soon realised that the hijra community’s system of social existence, based on non-biological kinship networks called Parivar, is a systematically organised community within themselves. Sandeep is from rural Kerala, Thalassery, close to the French territory of Mahe, where modern life translated through activities like playing cricket, baking cakes and being entertained at the local circus. It was known for it’s black pepper that grew abundantly around the young man’s home. The family harvested it and was oblivious to the fact that this spice had changed the cultural geography and history of this verdant land. Sandeep grew up in a family that came to terms with his new identity. Sandeep identified himself as queer and found strength in being with creative people and artists. Sandeep found a new family by working as a coordinator at an alternative place like 1Shanthiroad, and was soon forging friendships in his new found home with the other “artists in residence”. Here, solidarity and sustained and respectful relationships are nurtured beyond the idea of the nuclear family. This space became about exploring and discovering a new family of friendships in a non-judgemental space, by facilitating creative conversations of acceptance and understanding.

Sandeep reconnected with the LGBTQ community in Kochi. They were breaking through the silence and frustration of the hyper masculine world of heterosexuals which incidentally has a matriarchal system underlying it; they were becoming more visible as “sexual minorities” and were organising themselves into small groups and communities to launch queer parades. Sandeep places himself as part of this queer community and looks at masquerade as  a celebration of kitsch culture, and being ‘camp’ was the new order of the day. Much of these styles and strategies were influenced by popular cinema and popular culture. This new found freedom encouraged Sandeep to reach out to others like him, as he wanted to look at the desires and aspirations, struggles and strengths. He was soon discovering his own culture, fluid traditions of “Theyyam”- a folk ritual were a man becomes a Goddesses through an elaborate performance. The presence of a fluid sexual identity in context of the sacred was at one time, and some places still is a living tradition. The same local community sustains this popular tradition that continues to venerate the male masquerading as the divine feminine. 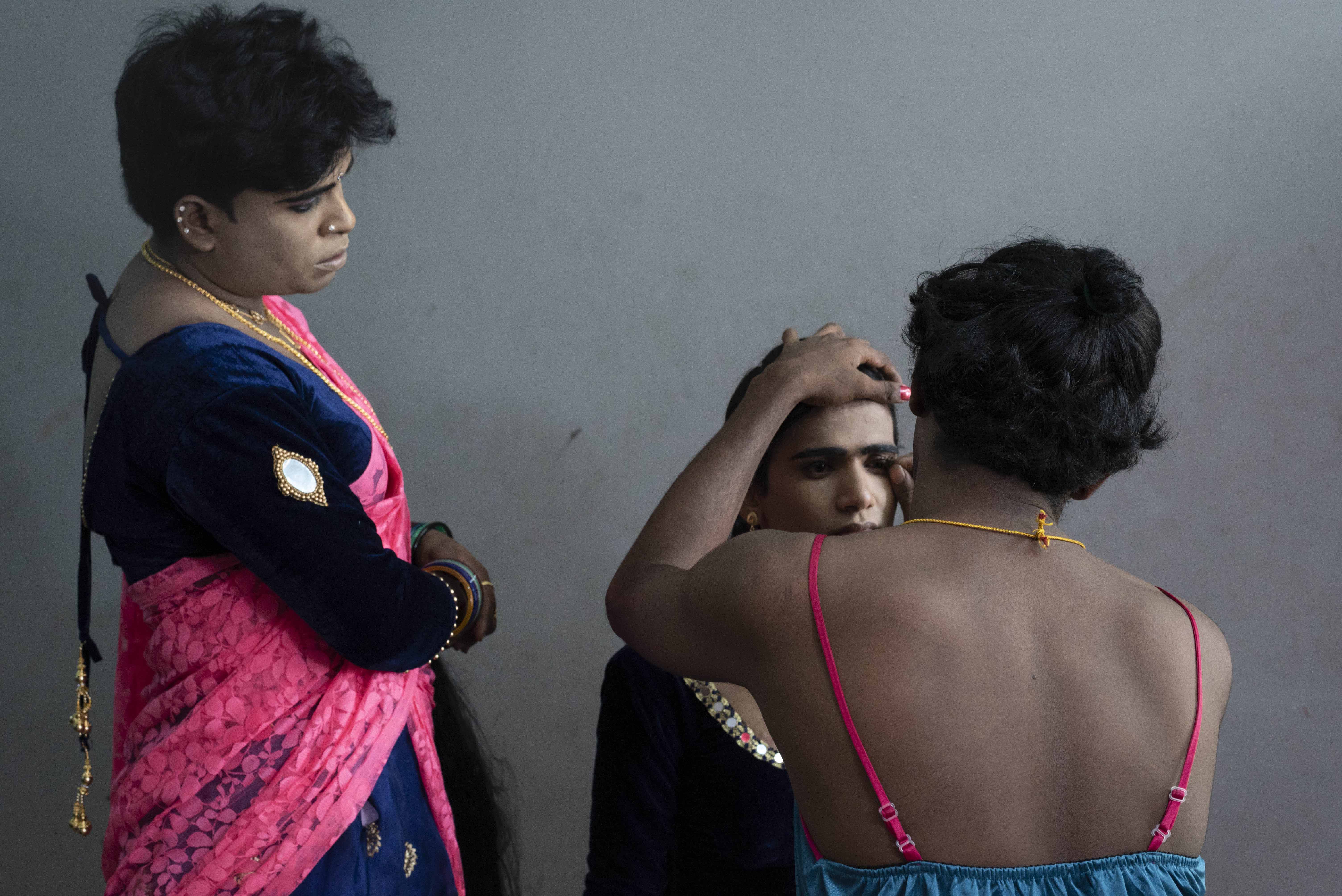 For Sandeep, this new association was a catalyst to his own development and growth and opened up new possibilities to be part of the queer community a fluid family. The result can be seen in a series of intimate portraits that document acts of adornment in private spaces. The conversations that emerged from the idea of the family have shifted the status quo through a freewheeling, rhizomatic sense of associations.

I could think of a new metaphor for this “Parivaar” from a local drink I had, it was a variation of coffee but was different. It had a sharp taste of dry ginger and black pepper mixed with coffee and was called “Chukku Kapi”- this local brew was potent and stirred my palette. We just had to get used to the new flavour but the variation is always a challenge which we need to except and relish.

“Parivaar” is a place that makes them feel safe and confident in their expression of identity and that is very important for the mental well-being of any person. Considering the instances of violence against the transgender community and the stigma attached to them, these Parivaar spaces offer a safe place to be and belong.

Sandeep dedicates this photographic project to Abhishek aka Annamma, and it was seeing their relationship—a transgender mother and daughter that motivated him.

For disputes, Annamma relies on Miya for solutions. In turn, Annamma (aka chela) is supposed to look after the guru. This is how social security works within this layered and complex equation, an alternative to the biological family they have left either on their own or they were constrained to. In the “discipleship lineage system,” a hijra guru adopts a person and then they become part of the kinship network while “Hijra Parivaar” become apprenticeship systems. The “Parivaar” system is in fact, an institutionalised lifestyle, which defies the heteronormative idea of a family.

Suresh Jayaram is an Artist, Art Historian, Arts Administrator, and Curator from Bangalore. He is the Founder, Director of Visual Arts Collective/1Shanthiroad Studio an international artist’s residency and alternative art space in Bangalore, India.

All Images from the ongoing series Shri Shrimathi Kumari, by Sandeep TK. 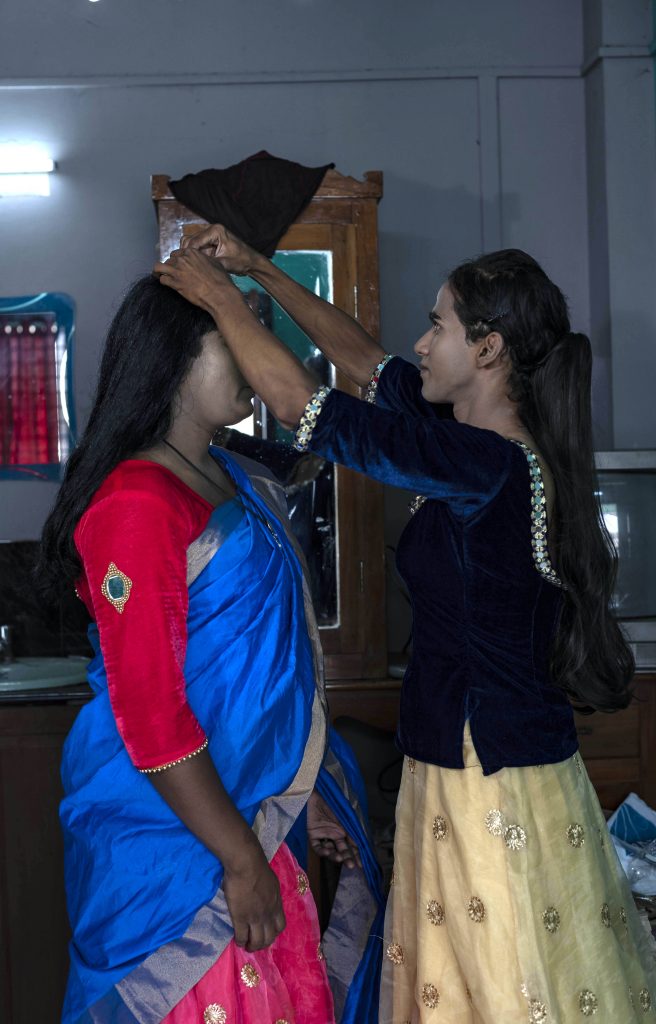 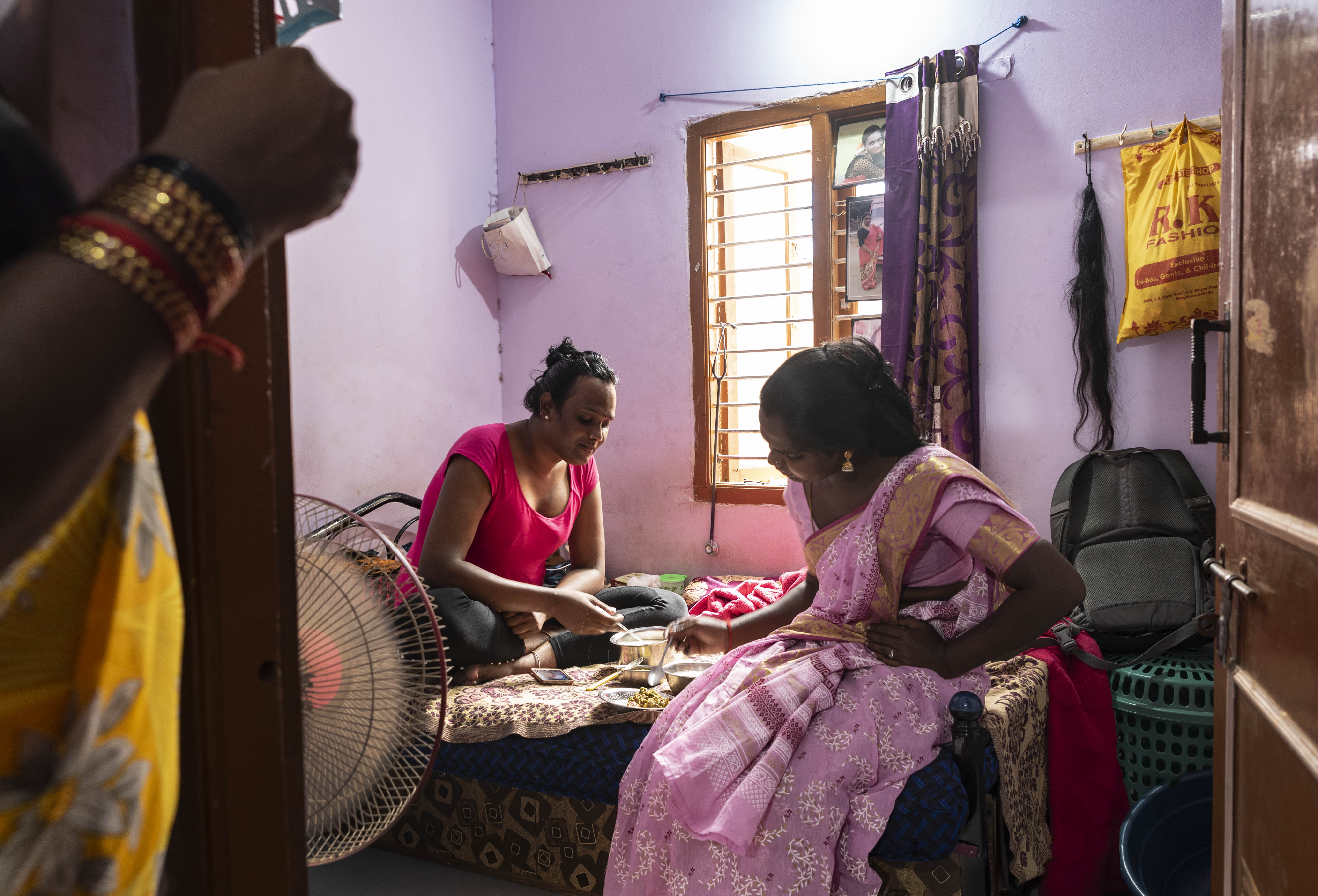