The Naxalite movement in Kerala was more an intellectual phenomenon than about political activism alone. The leaders, the organisers, the backbone, and the continuity of the movement came from radical intellectuals who believed in Mao-Tse Tung’s revolutionary ideology. The heyday of naxalism in Kerala was from 1968 to 1976, when the state witnessed almost all the major incidents of Naxalite-related violence under the leadership of these individuals.

Praxis is the process by which a theory, lesson, or skill is enacted, embodied, or realised, key tenets of which have come from the writings of Karl Marx, Antonio Gramsci, among many others. Through volumes on the subject of Praxis, I intend to represent a time-line of intellectual activism by looking at some of yesterday’s Naxalite Revolutionaries who created history but were also consumed by it – beaten, and brutalised by the very passion they had unleashed.

The movement in Kerala was deeply influenced by the Naxalbari incident in West Bengal. A group of revolutionaries under the leadership of radical intellectuals like Narayanan, Varghese, and Vasu, attacked two police stations in the late 1960s in North Kerala which historically came to be known as the Thalassery-Pulpally attack.

The only female revolutionary in that group was the eighteen year- old K. Ajitha. Trekking in the bitter cold through the deep forests of Waynad, in pants and a blouse, and a thin jersey, she was among the few that refused to desert the path they had chosen, and to liberate the peasants from the shackles of slavery and misery. Ajitha dipped her palm in the blood of murdered policemen and left an imprint on the wall of the police station. She is today a home-maker and a busy activist nurturing a feminist group called Anweshi (Kozhikode) – an organisation primarily committed to the cause of uplifting women. 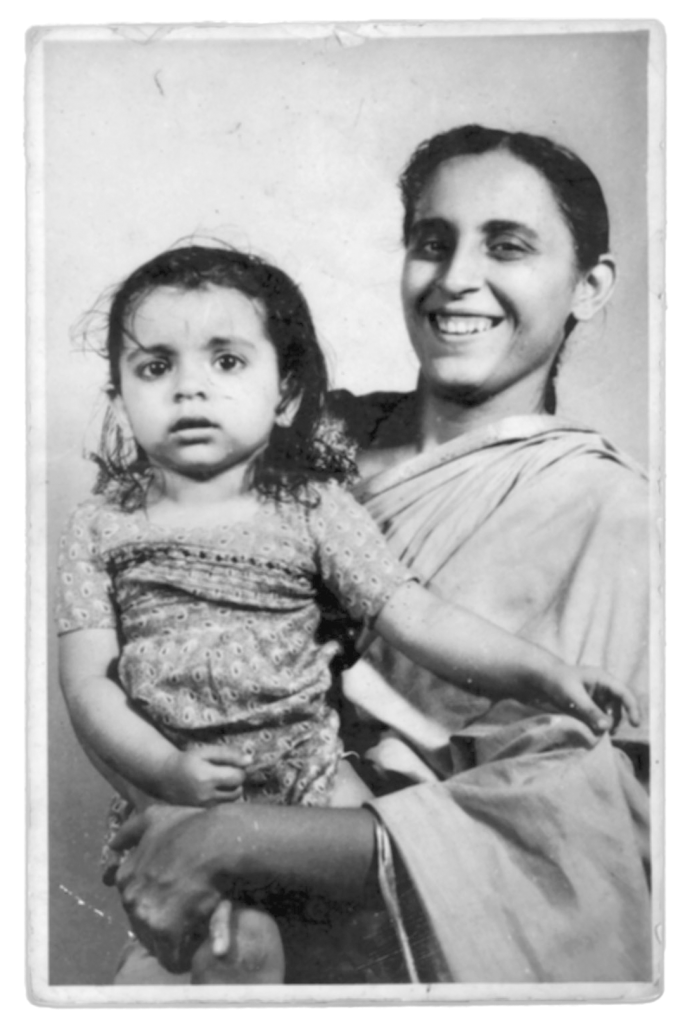 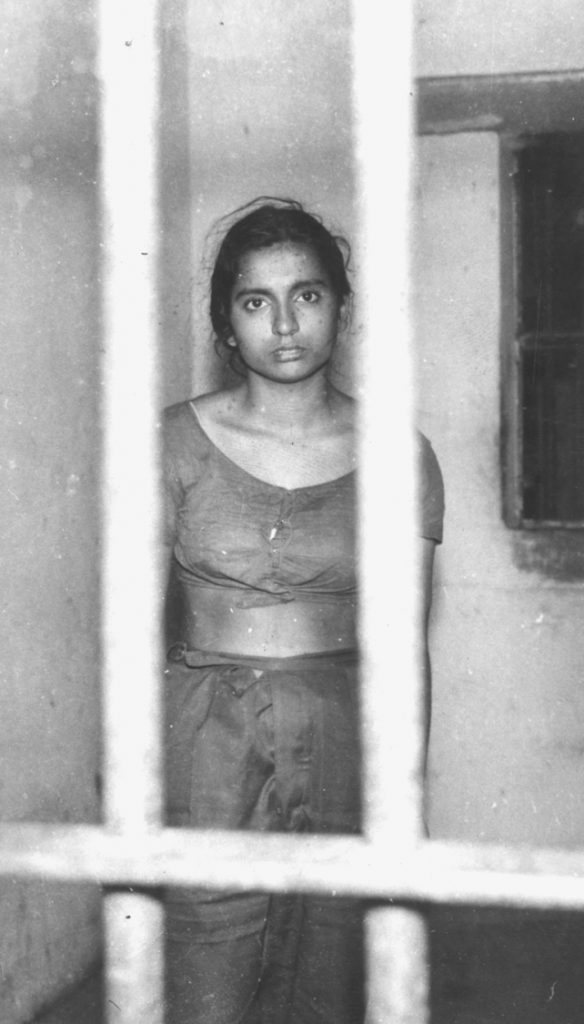 Ajitha at the age of eighteen. 1968. Courtesy Ajitha’s Personal Archives. 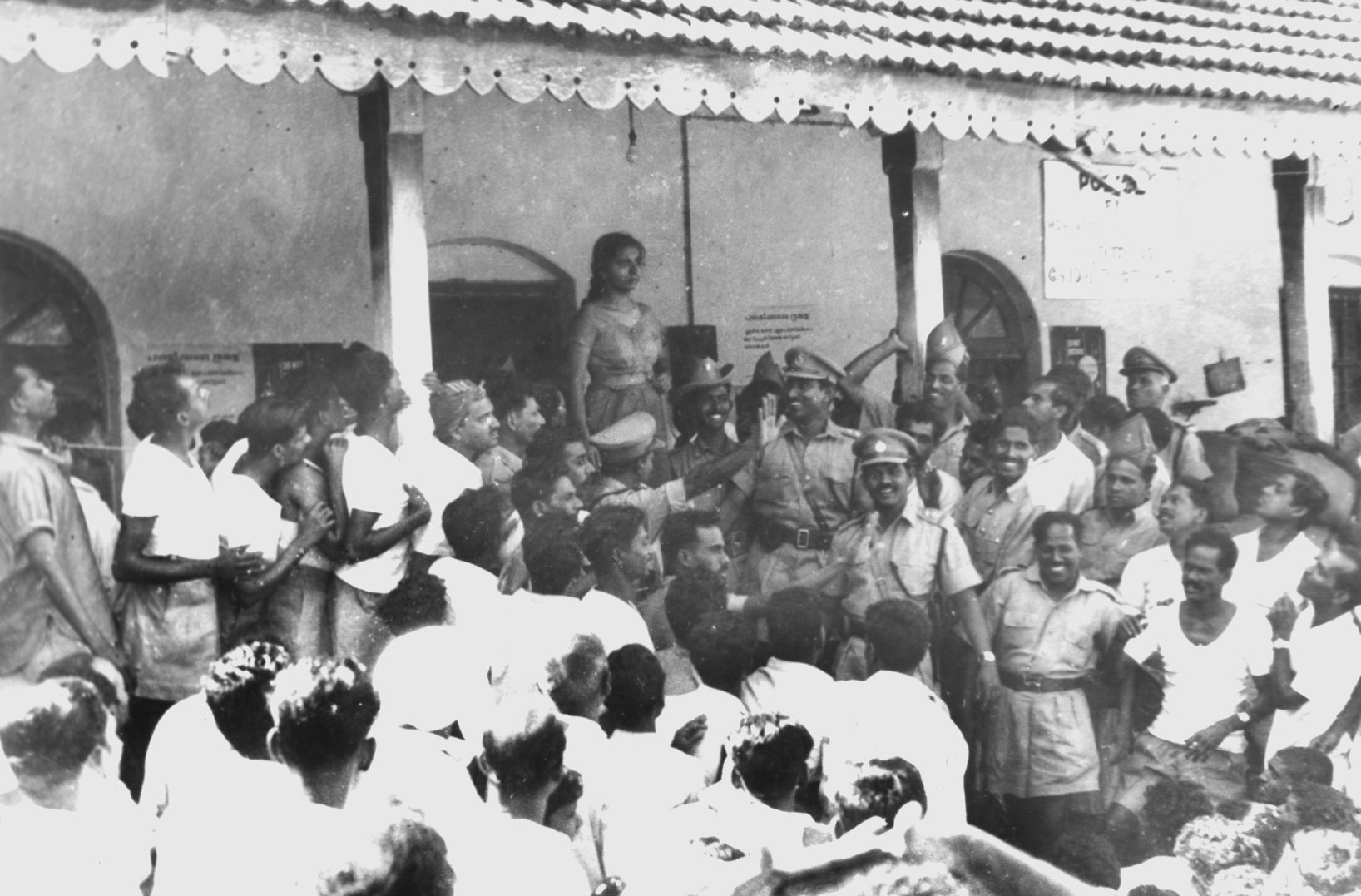 Ajitha being paraded in her pants and blouse, while arrested for Pulpally police station attack. c.1968. Courtesy Ajitha’s Personal Archives.

Mandakini and other comrades posing for a photograph along with a group of policemen. 1968. Courtesy Ajitha’s Personal Archive. 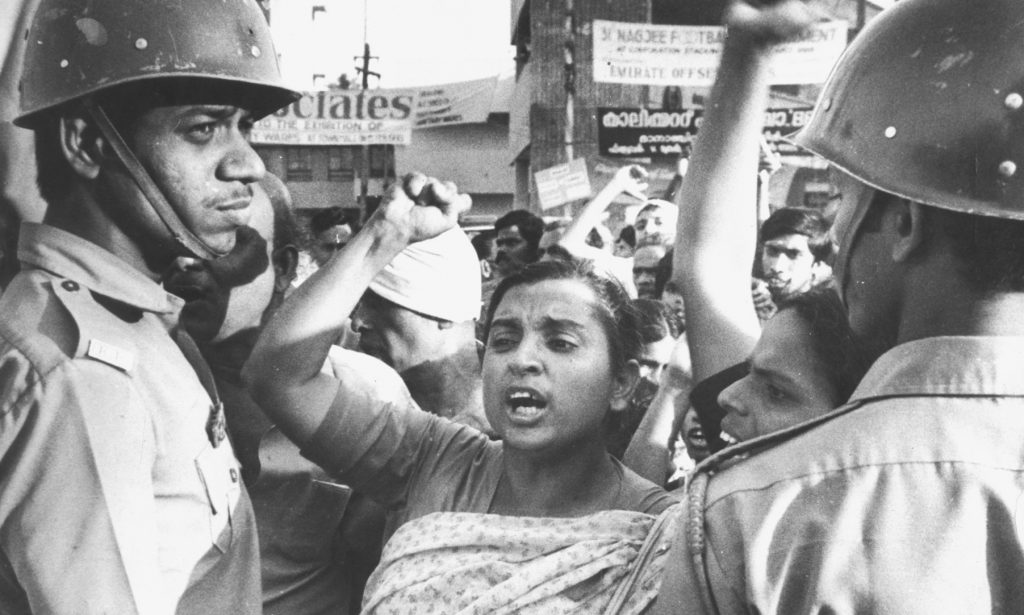 Ayinoor Vasu came to the forefront as one of the leaders of the Thirunelli Naxalite action (1970). Following the attack, Varghese, a Naxalite leader was killed and Vasu was imprisoned at Kannur Central Prison for seven years. Being a Naxalite, many refused to offer him a job after his time in jail. He started making umbrellas to subsist, learning the skill in 1955, so as to raise funds for buying a band set for The Communist Party in Kozhikode. Even in his eighties, his voice was strong as he spoke passionately about the Adivasi. He seemed proud of the strides made by the oppressed group. Conditions of thousands of Adivasi families improved as a result of the Naxalite movement led by Vasu, Varghese, and other comrades. He remembers his time alone in Wayanad forests, living only on fruits and natural spring water, for a duration of time. The only thing that worried him were thorns, as the movement was conducted primarily at night, the forest being surrounded by Police and CRPF (Central Reserve Police Force). The present rural scenario of India disheartens him, as the government and society fail to do their duty in uplifting the downtrodden masses. His efforts towards galvanising resistance against imperialism, fascism, and state sponsored terrorism; the protection, and respect for human rights, issues concerning the oppressed—Adivasi, Dalits, and minorities, women and children—are remarkable. Vasu lives in a one-bedroomkitchen apartment that was once the object of fierce police surveillance. Images and the writings of Lenin, Stalin, and Mao keep each other company in photo frames and books on the shelves. He is popularly referred to as “GROW Vasu” because he was a leader of the Gwalior Rayons Worker’s Organisation. 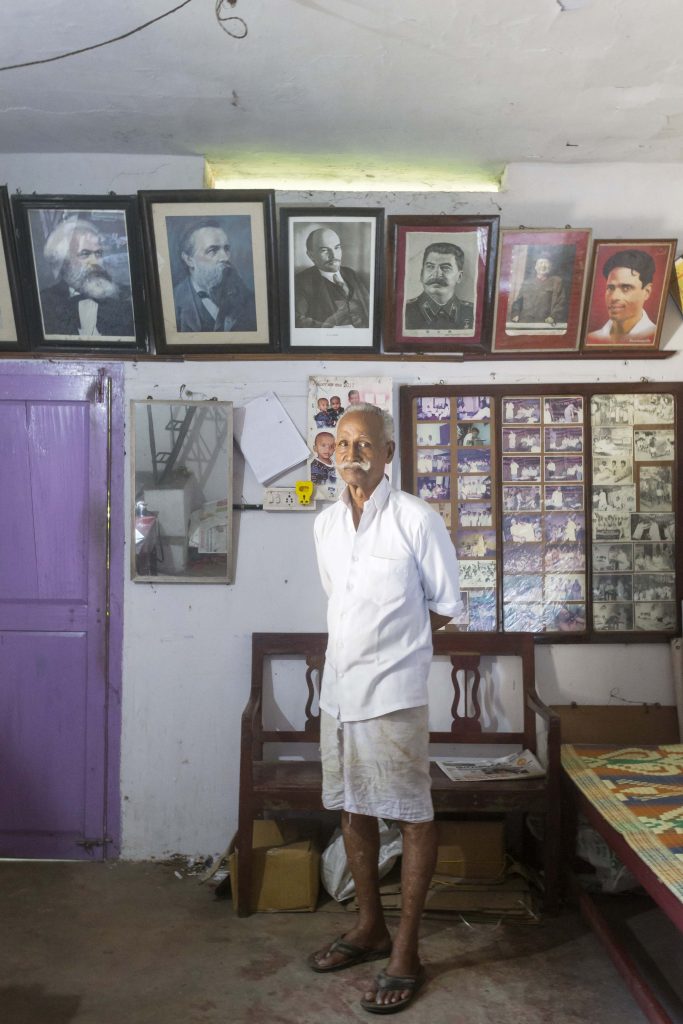 Rohith Krishnan, Vasu standing in front of his own political memorabilia. Calicut. 2017. Digital. 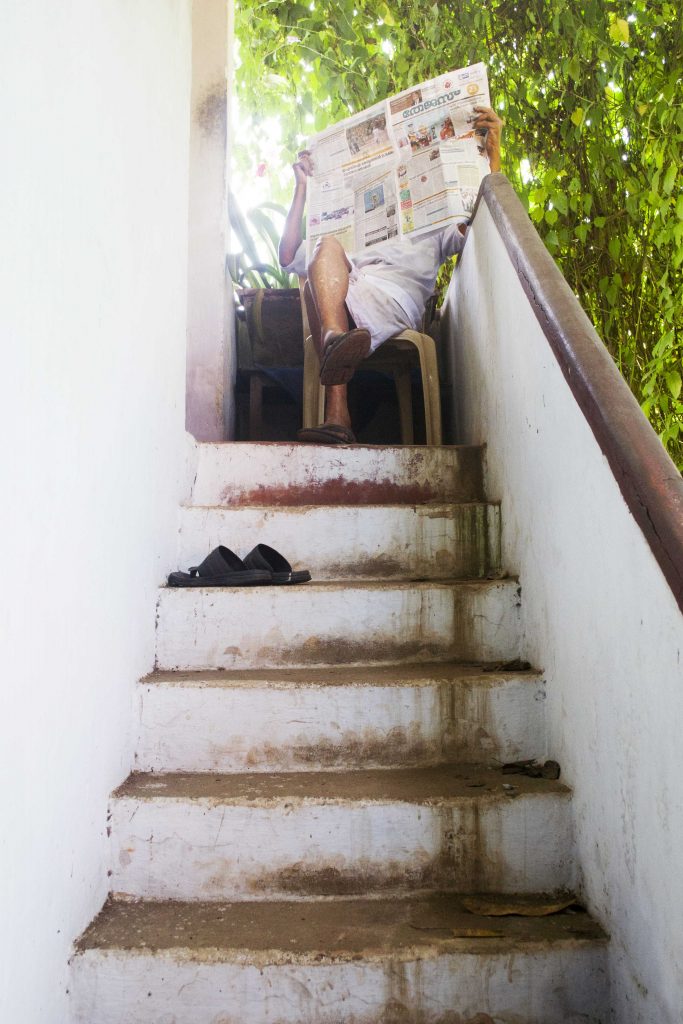 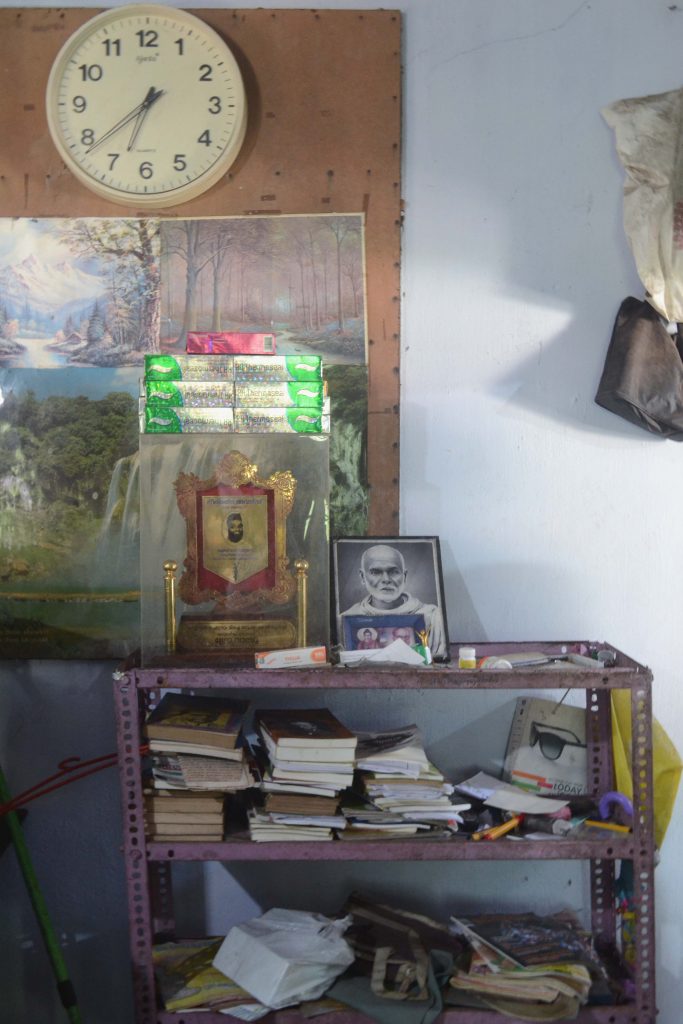 Harinarayanan was a cultural activist whose medium of expression and resistance was percussion and music. He had been a fellow traveler with other anarchists and artists like avant-garde filmmaker John Abraham. In John’s hallmark movie, Amma Ariyan (Report to Mother) Hari enacted the role of a tabla player who commits suicide. The story revolves around incidents following the death of the young Naxalite and his friend’s journey along with other comrades to inform his mother of the incident.

After the Emergency (1975-77), Naxal leaders focused their energies on a cultural resistance movement and formed the Janakiya Samskarika Vedi (People’s Cultural Forum). Harinarayanan along with other radical intellectuals of the Kozhikode Samskarika Vedi (Kozhikode Cultural Forum) organized people’s collective street plays and theatre dramas. Harinarayanan lived the life of a nomad, an eternal wanderer.

He believed that an intellectual is not content in mentally tranquil times, but finds pleasure only in inquiry and persistence. 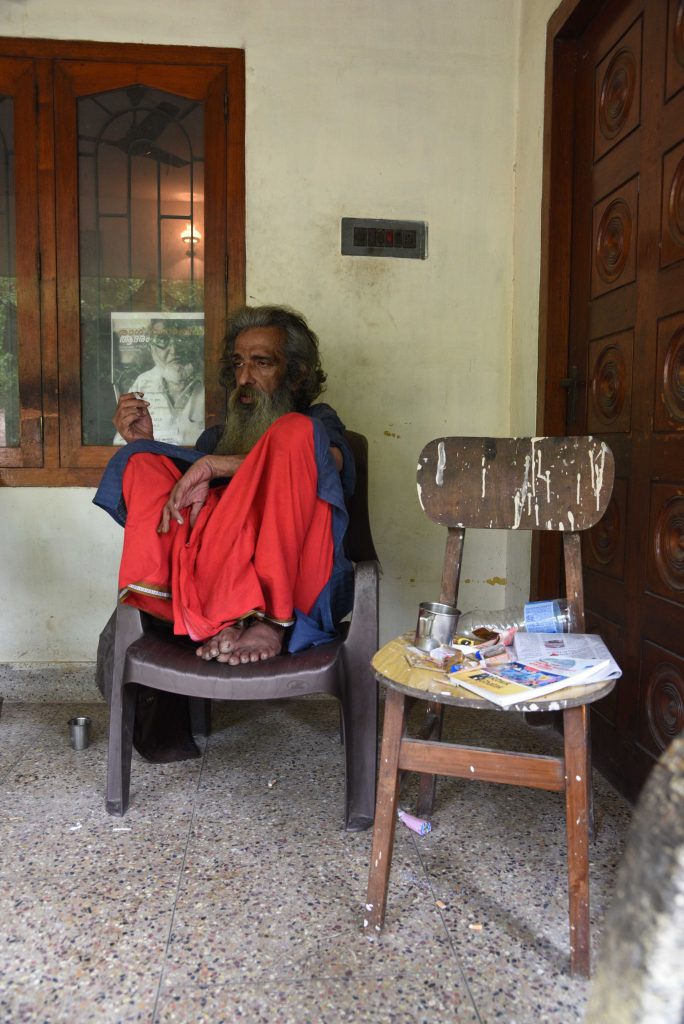 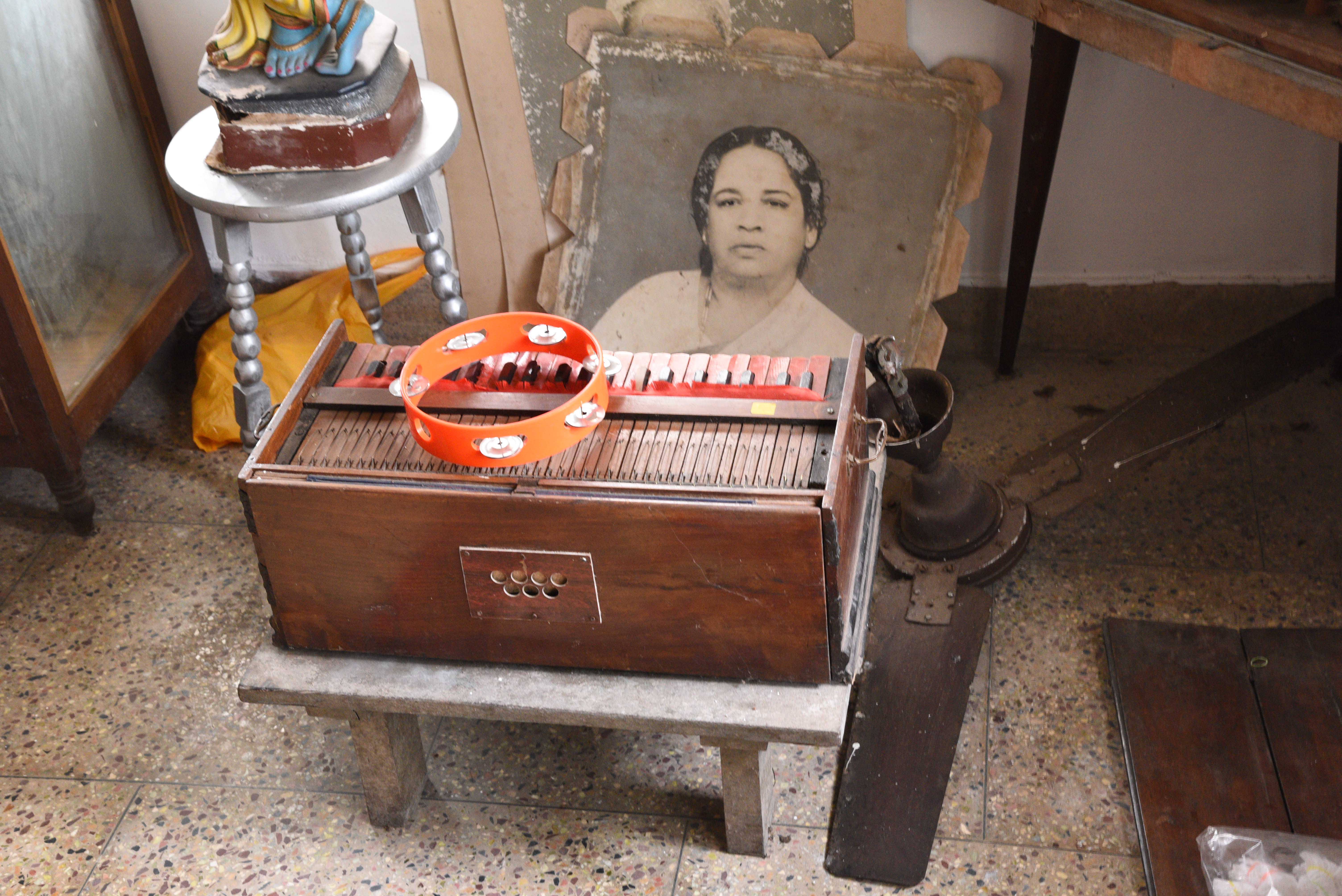 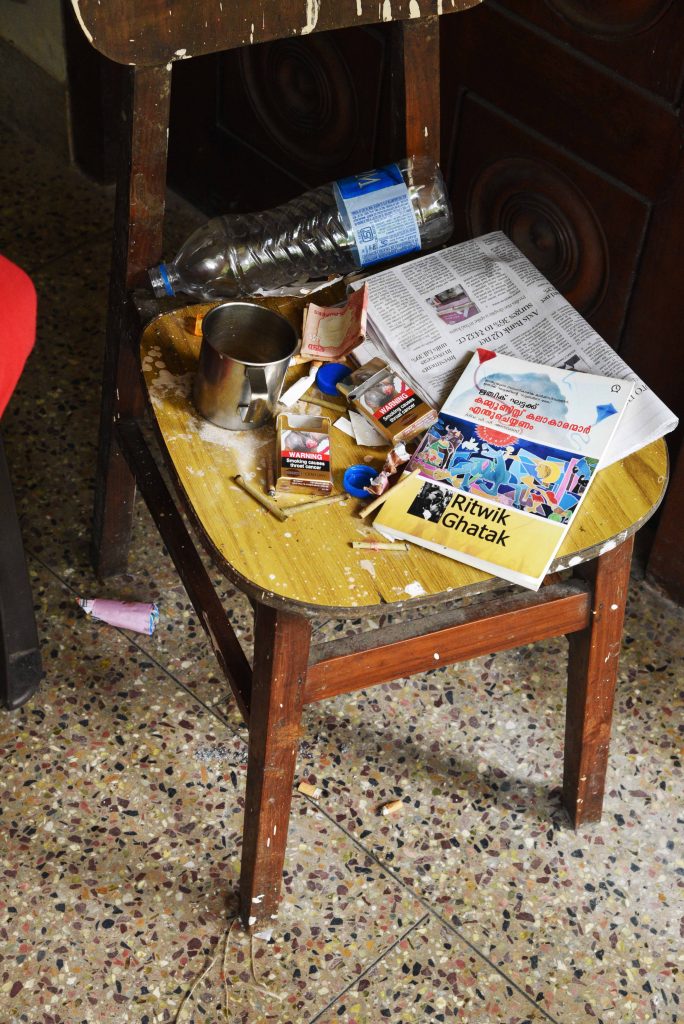 Rohith Krishnan is a photographer based in Kerala (India). He prefers working with photographs and moving images as a medium of expression and resistance. He is currently pursuing masters in Photography Design at National Institute of Design, Gandhinagar, India. During his student practice at NID, he mostly dealt with topics related to communities, culture, political phenomena, violence etc. through explorations in the form of photo-books, zines, moving images and installations. Documentary and experimental filmmaking also interests him.

Rohith Krishnan (@_krishnanrohith) is a photographer based in Kerala. He prefers working with photographs and moving images as a medium of expression. He is currently pursuing Masters in Photography Design at the National Institute of Design, Gandhinagar, India. In the PIX issue, Rohith’s title for the series is Praxis, or the process by which a theory, lesson, or skill is enacted, embodied, or realised, key tenets of which have come from the writings of Karl Marx and Antonio Gramsci. He presents three narratives which include images from the archive of activist Ajitha from Kerala, representative of the Naxalite movement from the 1960s; as well as Ayinoor Vasu and Harinarayanan who created history through their own acts of resistance. Images featured in this video may differ from the PIX edition. (Cover image by Yashna Kaul). Personal Paradigms will soon be launched digitally and made available on our website. Head to the link in bio to browse through our previous issues.