Giraffe Behind the Door: Life in Captivity

Animals in captivity are invariably looked at as live exhibits—living collections that institutions possess, and contextualise in make-belief environments. The unfortunate and artificial living conditions of these animals in many zoos across the world create an illusion of open space.

With the public gaze constantly upon them, the animals often encounter Zoochosis, manifesting in abnormal behaviour, such as pacing in their cages and sometimes even self-mutilation. Giraffe Behind the Door is a journey though the psychological and physical spaces of these animals.

*
Editor’s Note
In a similar vein, over the last several years with the showcasing of personal images as ‘documents’ internationally, the people of various communities have gradually begun to voice their deep concern about the evolution of thought around the treatment of humans, through what remains—objects and at times,the actual body. Thinking about physical identity and the genetic line, there appears to be a rupture between public sentiment and institutional concerns—specifically among those objects deemed ‘sacred’ by one community—then preserved and displayed as worthy ‘works of art’ by mainstream museums in other countries. Curators, world over are now re-evaluating how cultural organisations should handle such ‘bodies’ in order to preserve the dignity of the dead. Furthermore,many museums now sense mounting pressure and increasing demands to repatriate ancestral remains so as to give generations of affected families, a sense of peace by laying such ‘objects’ to rest. Taking this as a sign,should we not return nature to her rightful place?

They try to make you comfortable… If [you] try to compare the situations and the environment that we live in here and the environment that we live in Brazil, there is a big difference. Here, you live in avery small place with all the technological advances possible… you know but you don’t have the space. In Brazil, you have the space…We need the space to feel that we are part of the world and not a kind of piece of object in a box.

This is a transcription of a monologue delivered by a lion lolling on a fake tree branch in a zoo’s concrete cell gesticulating expressively to vent his grievances in a lilting Latino accent with its soft consonants. The lion was one of the many animal characters that appeared in a series of short animated films called Creature Comforts (1990) conceived and directed by Nick Park of the Wallace and Gromit series fame. The voices and the words of the animals came from a series of interviews with real people talking about their real problems. In this lion’s case the voice was of a Brazilian student miserable in a cold, indifferent Britain pining for the sun, sea and spicy food from back home. Creature Comforts was a runaway success. Apart from its charm and hilarity of the sheer absurdity of an otherwise inarticulate animal’s coming into loquacious verbosity, what thrilled one was the knowledge—and the deep empathy it precipitated—of the perfect match of circumstances of two displaced beings. Asmita Parelkar’s work mirrors the same absurdity of the postmodern dislocation of the animal of which the modern zoo is the epitomy. In Parelkar’s frames animals seem to blend into the tungsten-lit mise en scènes that serve as their ersatz natural environments whose edges segue into human habitats. These edges mock human hubris born of our claims to the ability to understand animals. The displaced animal becomes even more of an enigma than it always was—the victim and cause of man’s own vitiated relationship with the natural world. 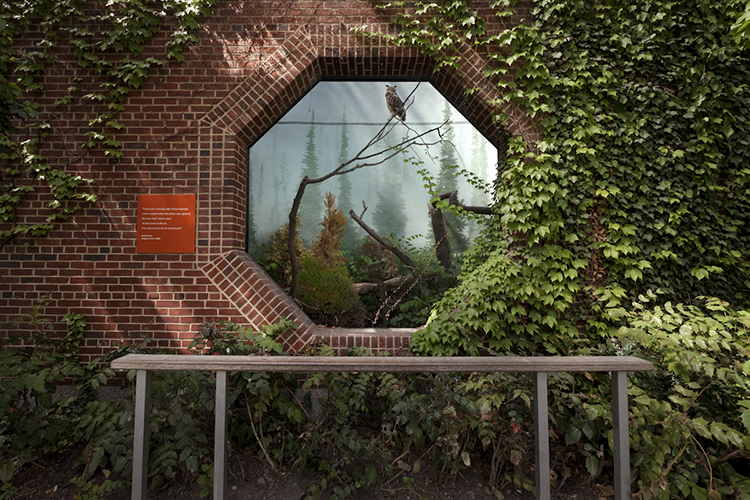 Crested Tinamou inside the glass enclosure in the World of Birds exhibit at the Bronx Zoo. April 17, 2011. Bronx, NY. 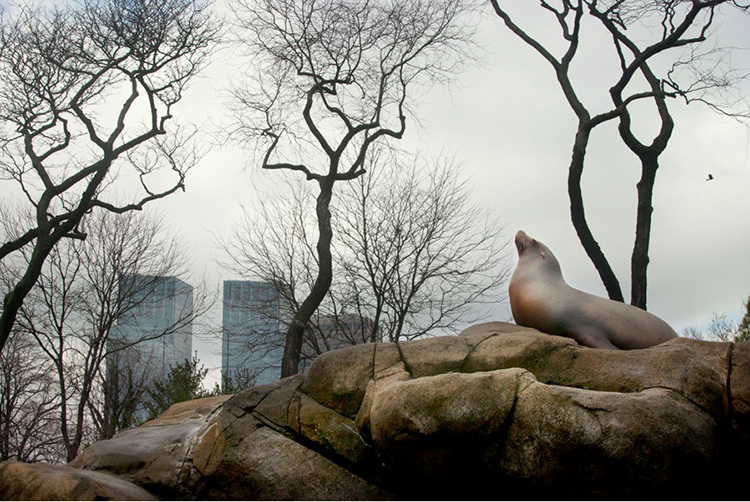 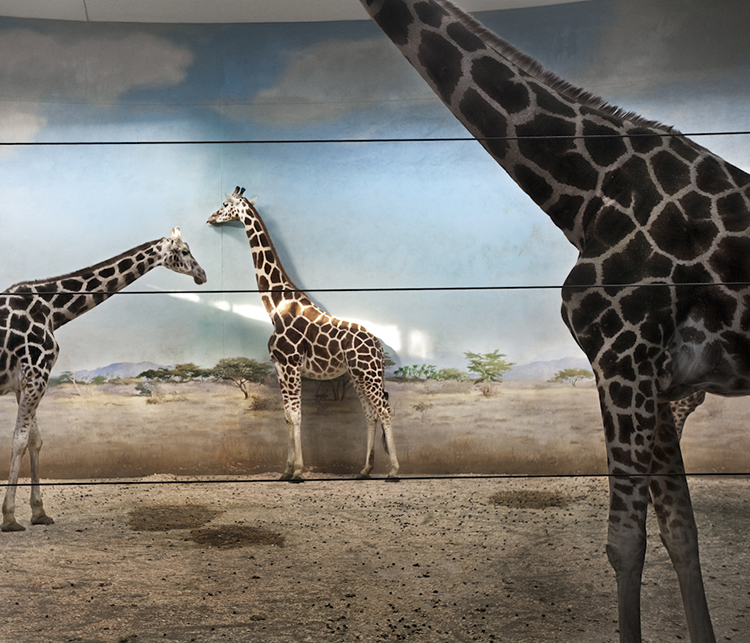 Giraffes in the winter enclosure in the Bronx Zoo. September 29, 2010.Bronx, NY. 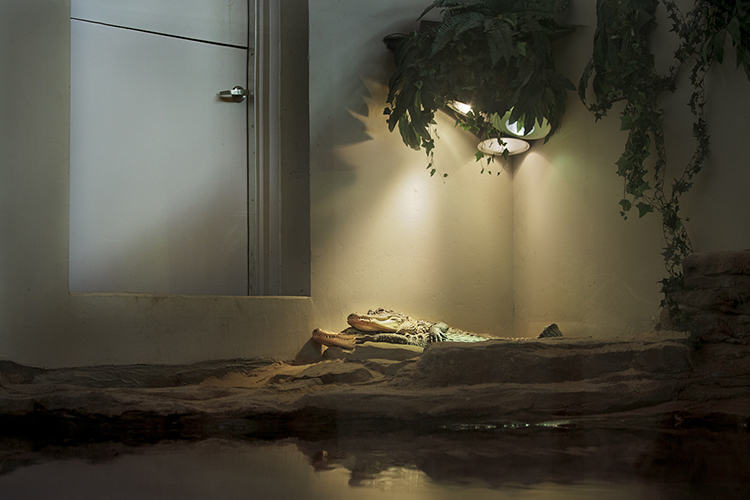 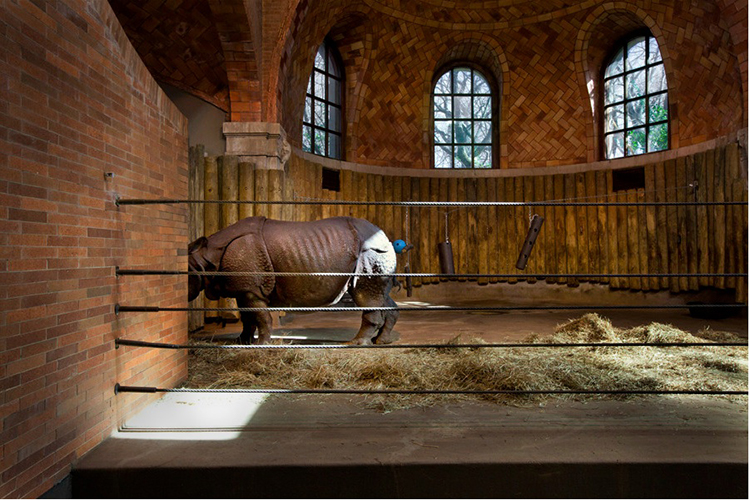 Indian rhinoceros inside the winter enclosure in the Bronx Zoo in Bronx.March 7, 2010, NY. 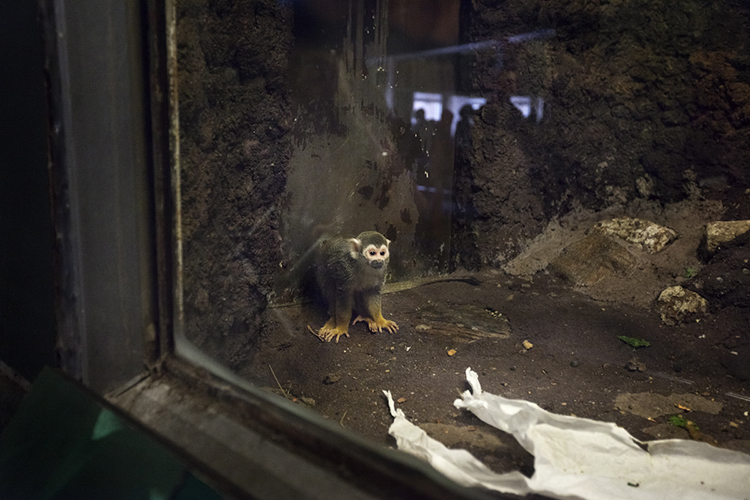 Squirrel monkey inside the enclosure in the monkey house at the Bronx Zoo.April 17, 2011, New York. 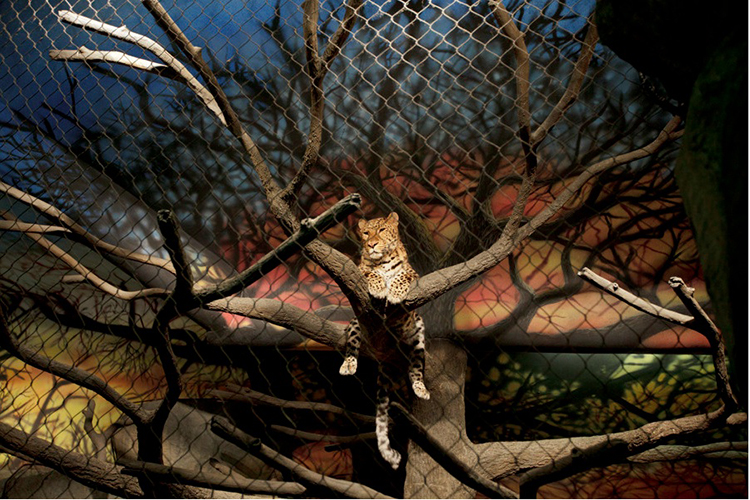 Amur leopard inside an enclosure at the Staten Island Zoo. April 25, NY. 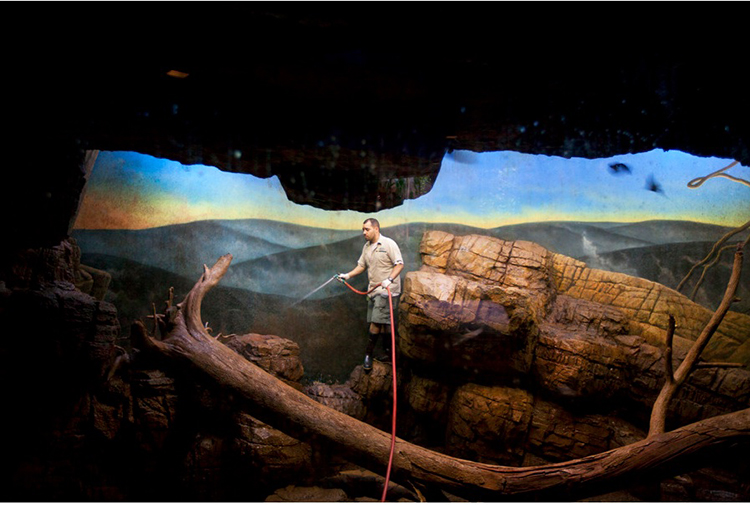