Koodankulam: A Nuclear Plant in my Backyard

‘Straightforward’ is a term in photography that has several ways of approach. Nikos Economopoulos’s social commentary on the Balkan nations, Antoine D’Agata’s edgy images of subcultures, and those who live on the periphery and Pablo Bartholomew’s autobiographical intent with photography have all informed my understanding of how, as well as why I capture the subject.

Koodankulam: A Nuclear Plant in my Backyard iterates the uprising of the local community against the government of India upon commissioning the Koodankulam Nuclear Power Plant (KKNPP), built 18 km from a village called Kavalkinaru where I too come from. These images have been shot over a period of fourteen months and is an ongoing project.

Until 2011, the residents remained indifferent to the possible effects of the plant. The tsunami that shook Japan, namely in places like Tohoku inMarch that year and the subsequent Fukushima Daiichi disaster caused panic in the region. KNPP was nearing its completion around that time, and people living in the vicinity of the plant feared a similar calamity. The villagers, already affected by the Indian Ocean tsunami of 2004 began raising questions about the safety of the nuclear plant.

Idinthakarai, a village located very close to the plant, has been at the centre of the protests. The villagers, mostly fishermen and farmers, are also worried about the ecological impact the plant would have on the area—the Gulf of Munnar is already an ecologically fragile region. They have been protesting for more than 3 years in a non-violent and peaceful manner, but have been repeatedly subjected to violence by government forces. Today Koodankulam protests not only create a debate on nuclear energy in India, but also question the philosophy of ‘democracy’ upon which India emerged as an independent nation.

I believe that photographs have the clout to make people re-look at political incidents, often having the power to interpret them. Their potential and impact can change the tide of the conflict-ridden space by empowering the masses—their perceptions as well as what they desire to question.

All images from the series Koodankulam: A Nuclear Plant in my Backyard
2012 (ongoing)
Digital 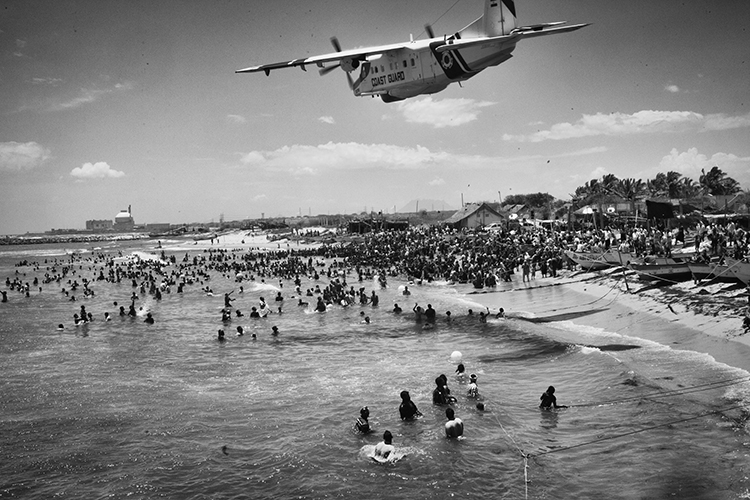 A Coastguard airplane flies low over protesting villagers who ventured into the sea as a part of their Jal Satyagraha. 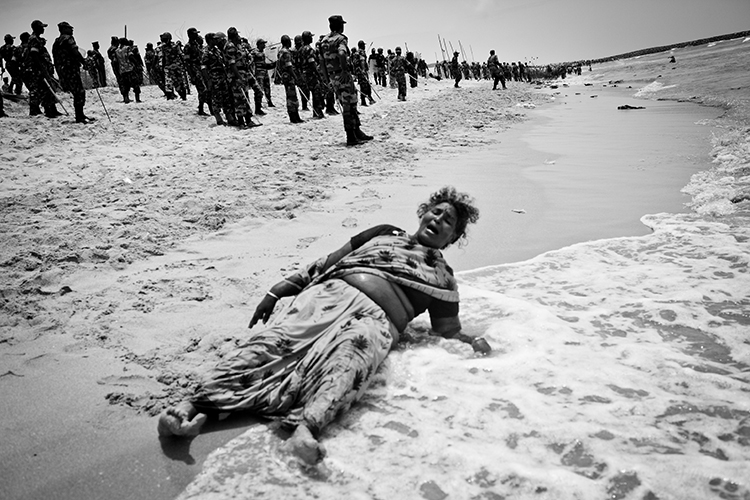 Xavieramma, a resident of Idinthakarai, cries out for help. She was later arrested by the security forces. She has been charged with 16 cases including charges like sedition and waging war against the nation. 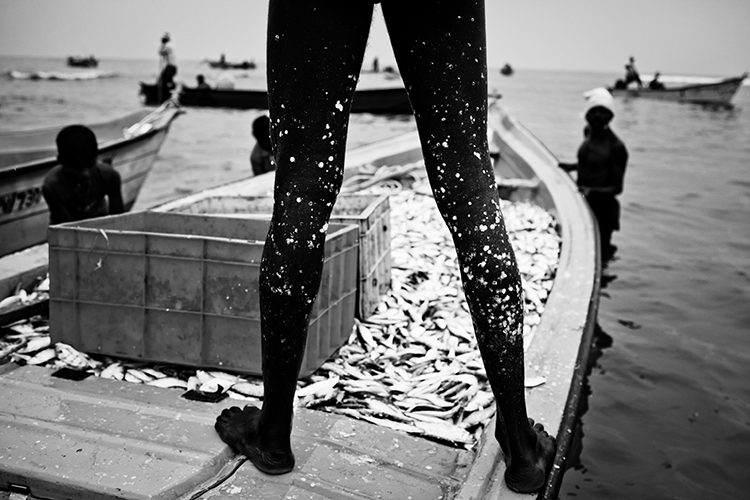 A fisherman takes his boat to the fish market to sell the day’s catch. Every Wednesday, villagers donate 10% of their earnings as their contribution towards running the protest. The villagers maintain accounts of all funds collected and spent by them. 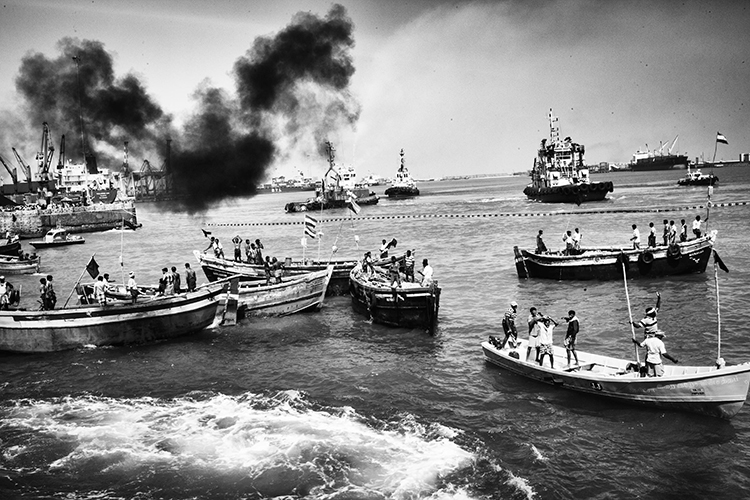 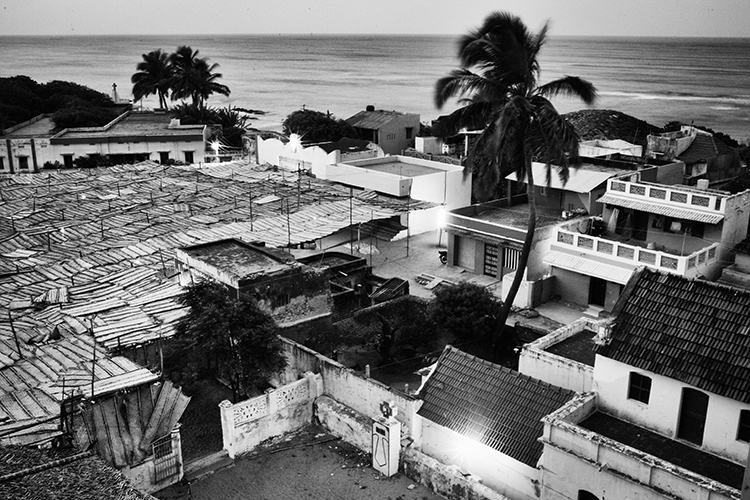 Fishermen lay siege to Tuticorin Port and block the passage of ships to protest the attack on villagers in Koodankulam by police forces. 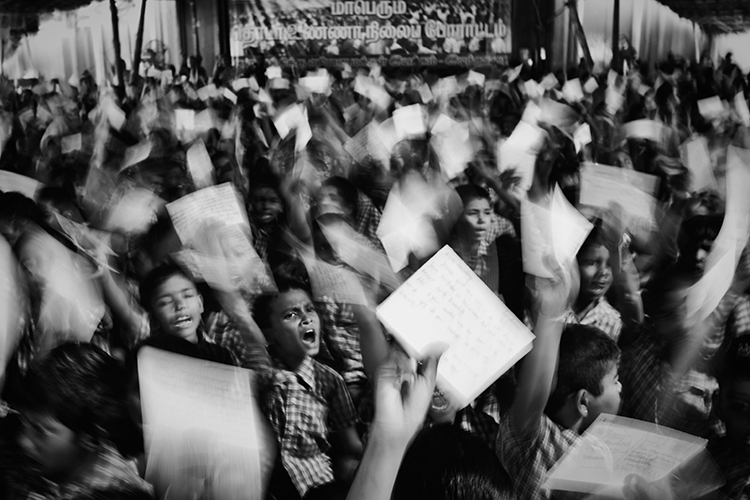 On Hiroshima Day (August 6), children from Idinthakarai village protested with post cards they wrote to the Russian Ambassador requesting Russia to stop providing technical support to the nuclear project.

Napolean, a resident of Idinthakarai, runs after being attacked by the police.

Thousands of villagers protesting against the commissioning of the plant sleep on the sea shore near KNPP with their children. 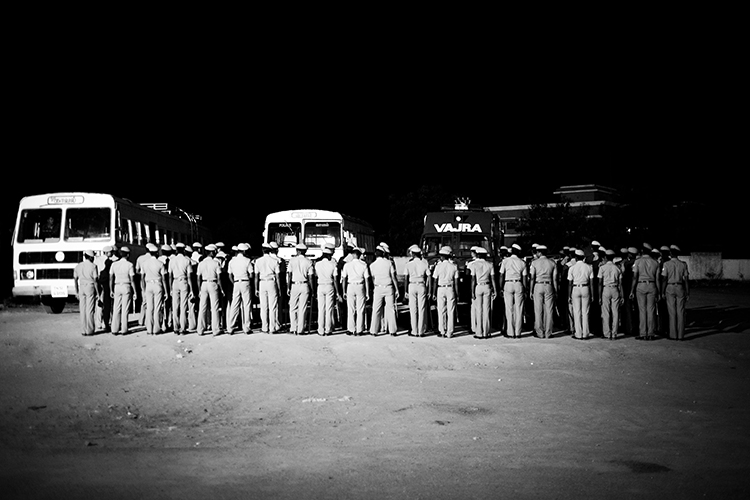 Police forces assemble in front of the KNPP before going on rounds in Koodankulam village after the imposition of a curfew.

Villagers take a holy procession around the Koothankuli village praying that the closure of nuclear power plant.

Villagers from the Koothankuli, prevented from going to Idinthakarai due to the curfew, gather in front of the church and shout anti-government slogans.