A Hand to a Recovering Nation

In a small workshop in Mae Sot, Thailand, Myo Zaw Aung waits in a cluttered room full of work benches, tools and workers. It’s over 30 degrees centigrade and the air is heavy with the smell of soiled flesh and industrial adhesive. A whiteboard on the wall lists names, ages, addresses and wounds. “Karen State, 26, Landmine, gunshot…” Near it, a large poster of Aung San Suu Kyi— the internationally revered face of Burma’s democratic movement—smiling broadly, gazes over the scene. Aung sits below, his dark figure cast in the shadow of the midday light as the artisans cast the piece of plastic and rubber that will soon become his right leg. Aung is a Karen—one, of more than 100 ethnic groups in Burma—and comes from Karen State, an area nestled up along the mountainous jungle of the western Thai border. Karen State, until the tentative ceasefire of December 2011, was one of several regions of the country plagued by a civil war that had run, largely unnoticed by the Western world, for the last 60 years. Guerrilla fighting between various ethnic groups and the Burmese military (or Tatmadaw) was rife with human rights abuses including forced labour, rape and the use of child soldiers and antipersonnel mines. While both sides are reported to have violated Geneva Convention rules, the Tatmadaw’s “Four Cuts” strategy specifically targeted civilians like Aung, in order to break down the rebels’ sources of food, financial support, information and recruits.

Though no clear statistics have been collected, due to government opaqueness, it is widely believed that casualties number in the hundreds of thousands while at least an additional 446, 000 in Eastern Burma alone have been internally displaced. The work of Mae Tao hospital in Mae Sot has been the lifeline for Burmese refugees in terms of medical attention. The prosthetic division of Mae Tao is its backbone and the only hope for those who carry the burden of memory and bear the scars of the past. The effort by different NGOs to keep the disabled and the addicts in the Mae La camp—who suffer the mental and physical trauma of being victims of land mines—deserves admiration and support.

In 2011, ceasefire agreements ended active conflict in most regions of the country. In addition, recent steps towards democratic reform by the government in Naypyidaw have been rewarded with the lifting of international sanctions and a détente with the international world. For the ethnic minorities living far from the quickly modernising urban centres of Yangon and Mandalay, such changes continue to remain distant.

They always said the same thing.
That they had lost them, that they broke,
that they calcified or plated over, wore out,
went under, never recovered. They always
said, I’ve been trying to find one, I’ve been
looking so long. And always, each time,
I would think I could almost hear it,
a distant drumming, a little life, my cheek
growing cold against that armor, my ear
pressed hard against the dead
echo of an abandoned cavity.

In those days, I thought I knew something
about disappeared hearts, and how to retrieve them.
Once, waking from a strange dream, I followed
a trail of blood, drops of rubies along a road
I had already taken, thinking I would trace
it to its source, that pulsing, elusive thing,
and cradle it in my palms with all the love
I thought it could give back. In my joy,
I tried to call out – but my voice came
tumbling in a breach of shredded scraps
from the slit at my throat.
The butcher’s knife with its bloody prints,
its gleaming alloy glinting like a grin.
My own heart gaping open, mined.

How much metal have I absorbed,
warmed in my body, and what
has it done to me?
Some nights I don’t know
what causes all that clanking.
My grandmother’s ghost in
the kitchen, or all the tin men
I have taken to my bed. A sound
like the drought wind on
a roof gone rusty after
years of percussive rain. 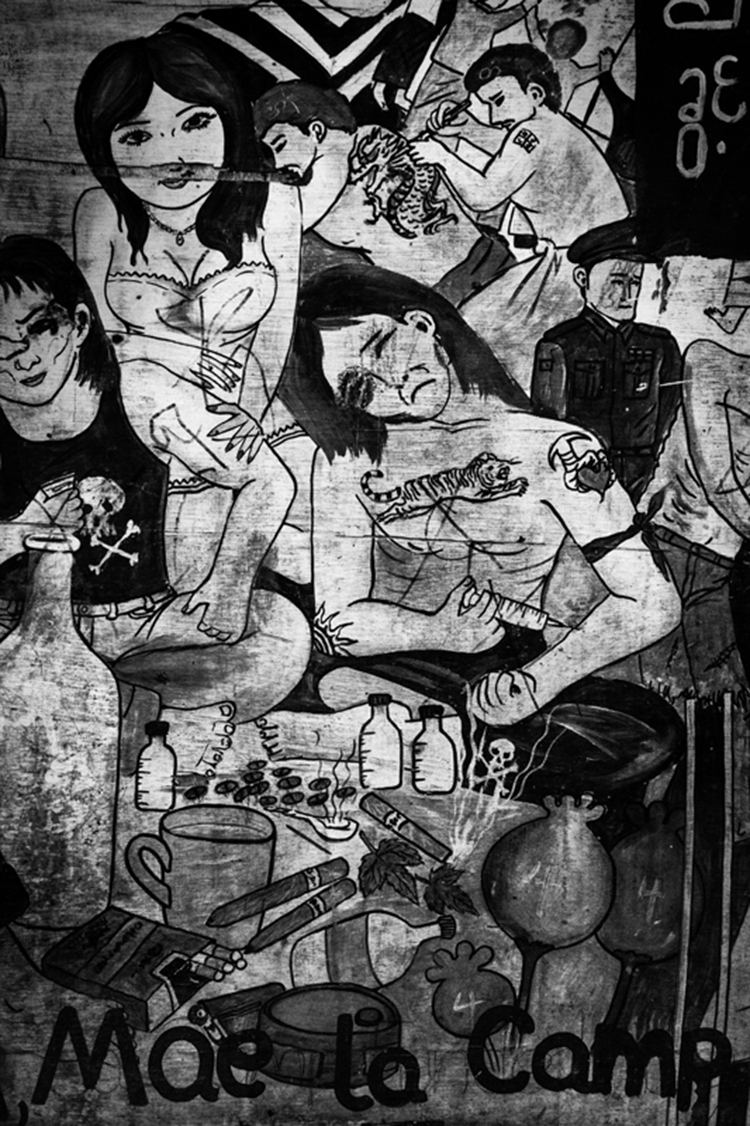 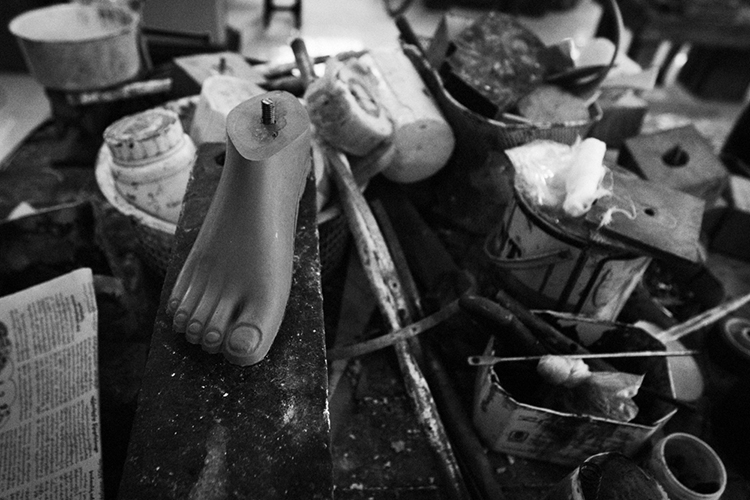 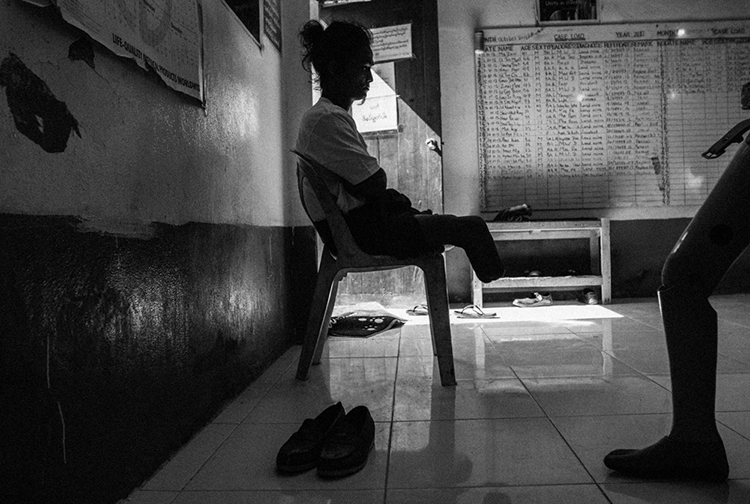 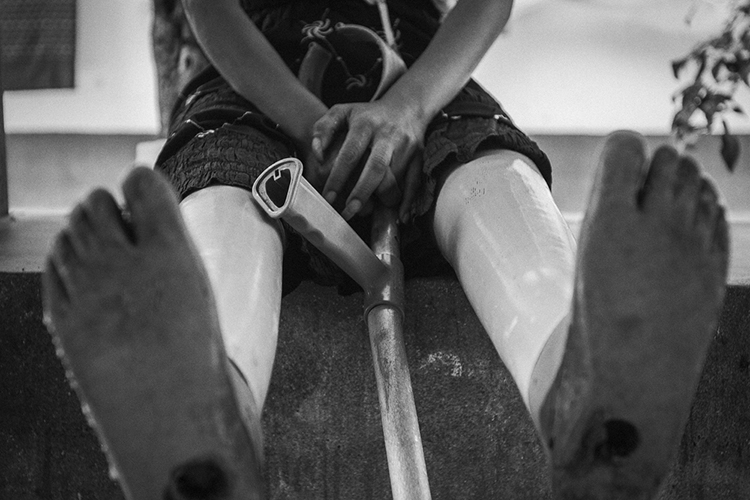 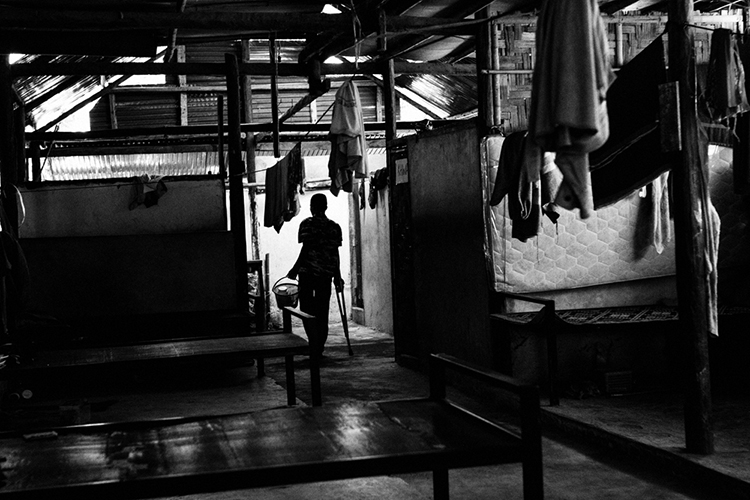 All images from the series A Hand to a Recovering Nation, December 2012 Mae Sot, Thailand