The earthquake and devastating tsunami of March 2011 stripped away almost everything that once made the residents of this region proud. Economic recovery and rebuilding will continue for more than ten years, with ongoing work to repair damage, remove mountains of remaining debris, begin rebuilding, and cope with nuclear contamination. Entire towns were erased in one terrible wave. And with the added terror of nuclear meltdowns at the Fukushima Dai Ichi nuclear plant, its surrounding prefectures will be irradiated for years to come, with lives interrupted and homes abandoned. Many people were barely able to recover belongings, let alone clean family graves that survived the disaster. Residents whose homes were destroyed by the tsunami or rendered uninhabitable by the nuclear disaster are now living in temporary housing complexes, in a state of limbo torn between a need to feel at home and the fear of being abandoned forever.

Small towns in Tohoku are no longer on the news. Although they are out of sight and out of people’s minds, the disaster is far from over. Sadly, all efforts are plagued by a number of serious problems. They include an unwillingness of the mainstream press to fully investigate or to place news in an analytical context; an unwillingness of elites in positions of authority, whether in the private sector or the government, to put aside politics as usual and address the needs of the many victims; and a lingering unwillingness on the part of many citizens to openly challenge the government even though many people privately voice their distrust of government claims and cynicism about its motivations. Two years later, the startling empty spaces symbolise what once was, but also what might be with signs of renewed life and resilience from the local population.

Paolo’s photographs from the Tohoku earthquake and tsunami were taken a year ago. A year had passed since that daunting day and yet this is still what you see. I have been going back and forth in the many connecting them to the way everyday life used to be. It is like a piece of string connecting them to the past, a past that had long been washed away. Some parts of Japan have moved on, broken buildings have been razed and debris cleared away. Places have changed so much that people can hardly recognise them any more. This is all areas affected by the disaster and through many visits I have seen and learned a great deal. Two years on, the place looks little like how it used to, the piled up debris covered in snow in the winter and grass in the spring, it is almost as though no one ever lived here. In many ways, those broken buildings and piles of debris act like landmarks, reminding people of what used to be there, partly recovery, partly the beginning of memories fading away. It is at times like this when I think photography can have a lasting effect on people and allow them to cling to memories.

The interior of a severely damaged house in Ishinomaki where many lives were lost. 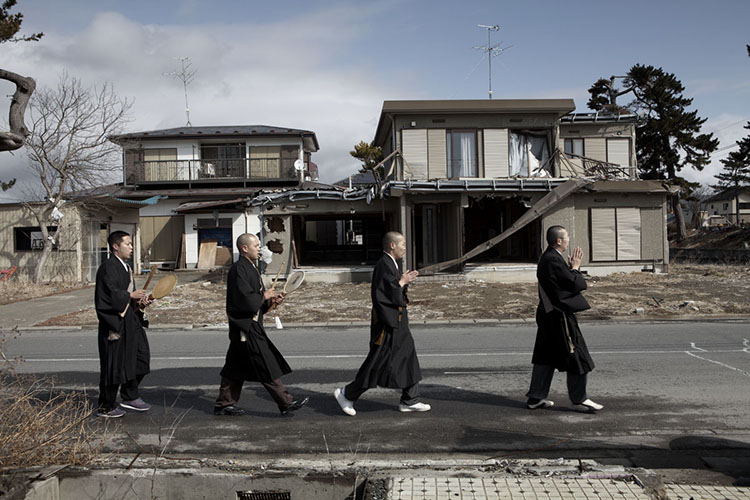 Monks pray in Ishinomaki on Sunday 11th March 2012 around 02:46 PM, the time an earthquake off the northeast coast of Japan unleashed a fifty-foot tsunami. 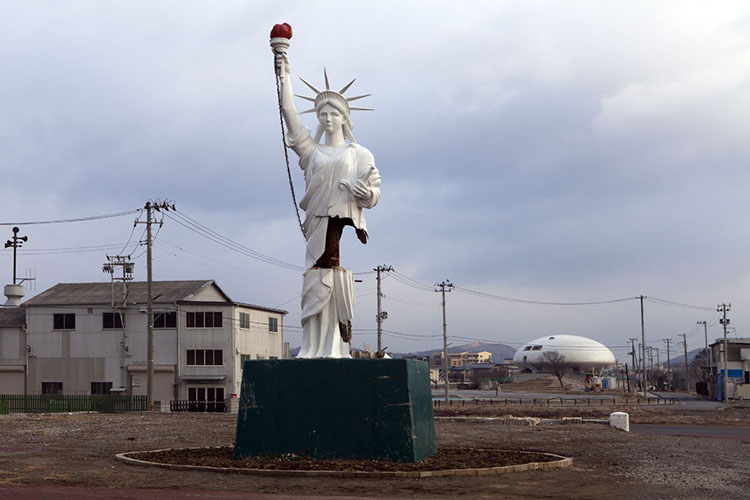 Cracked and damaged,the Statue of Liberty still stands tall on a small island in the Kitakami River in the city of Ishinomaki. Little else did. The mock statue was once a premier tourist attraction here in this port city in northeastern Japan. Now she raises her torch over a sea of devastation left by the monster tsunami that washed away whole villages and thousands of people. 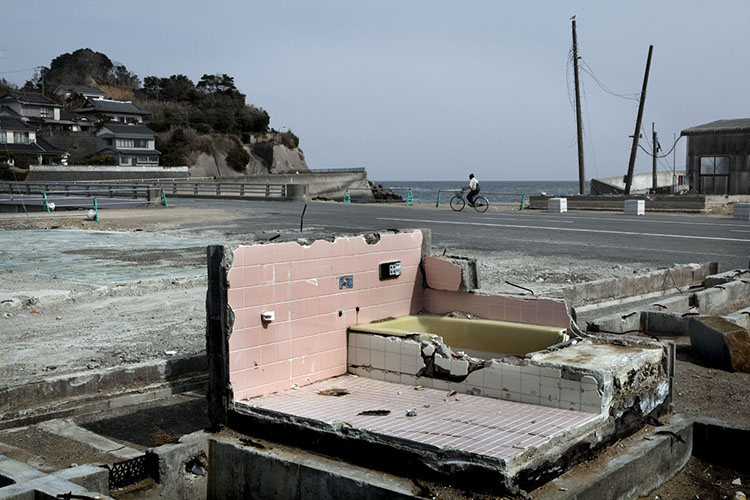 A bathtub and a concrete slab foundation are all that remain of a house where the 11 March 2011 tsunami thundered up through the bay at Hisanohama.

Once a great pine forest of 70,000trees, covered the ocean front at Takata Matsubara until the 11 March 2011 tsunami swept through decimating them all. Now the sea under cuts the roots beneath their stumps, giving them an other worldly appearance. Rikuzen-Takata, Iwate Prefecture, Japan. 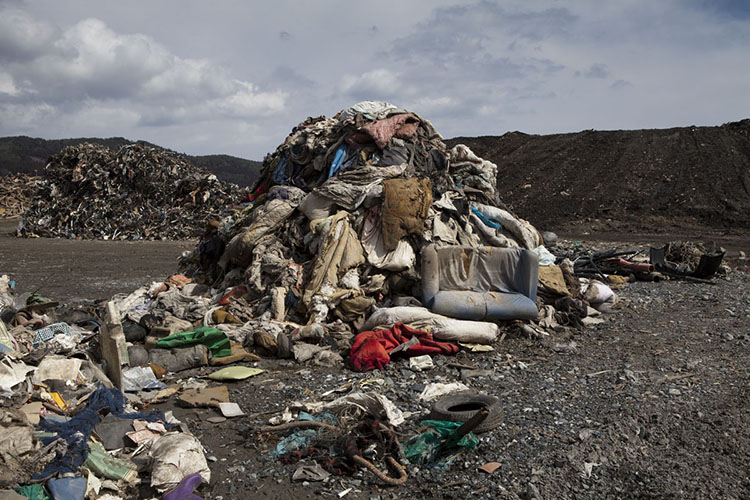 Mountains of clothing, bedding and household textiles collected from the devastated area that cannot be recycled. Rikuzen-Takata, Iwate Prefecture, Japan. 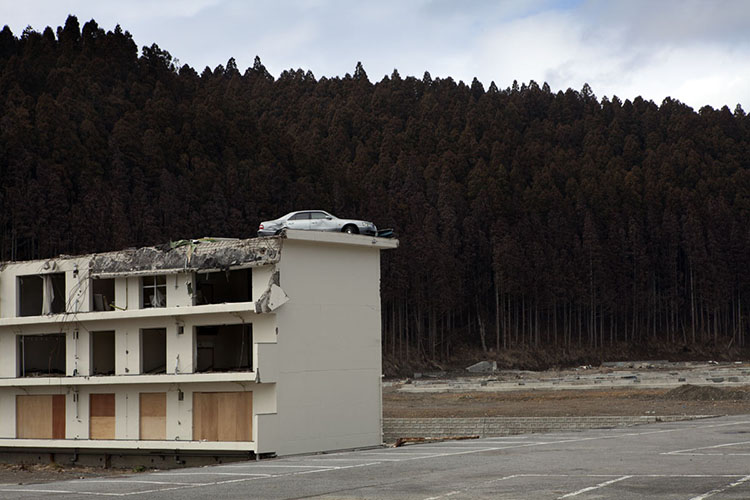 A car still sits atop a roof of a building, washed there by the tsunami, on the one year anniversary of the March 11th 2011 earthquake and tsunami, in Minami-Sanriku, Tohoku region, Japan on Sunday 11th March 2012. 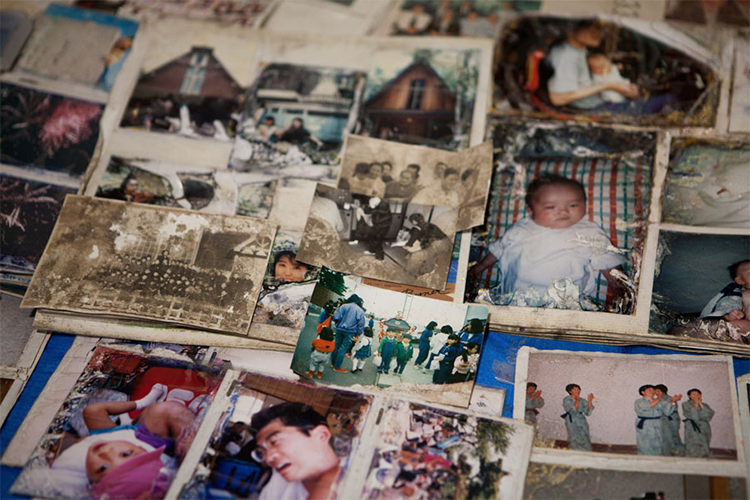 Cars stuck into the side of a building two days after the waves had left their destruction in the port area of Sendai. 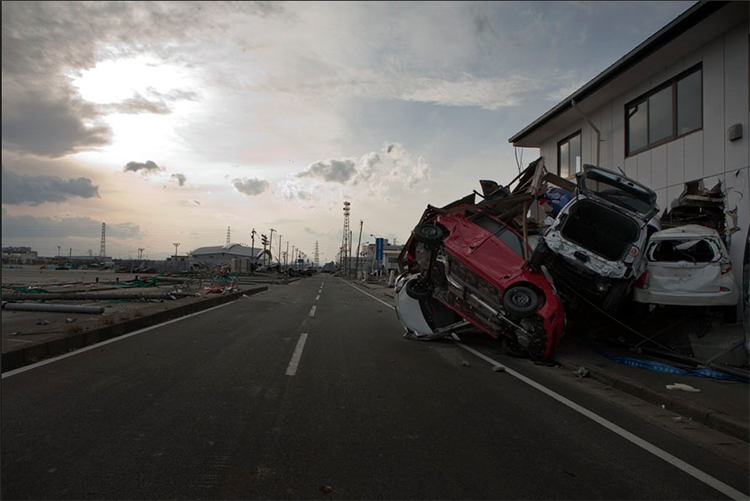 Family photos that were washed away by the tsunami, found amongst the rubble and debris, are salvaged and displayed at an evacuation shelter in the village of Usuiso which was almost completely destroyed by the tsunami. Any villagers who survived now live in temporary homes or with relatives in different parts of the country. There are plans to rebuild the village but many are afraid to move back into the area for fear of another tsunami.

A memorial with flowers and other offerings on a sea wall along the coastal road in the town of Hisanohama. Most residents have fled the areas.