Afghanistan has been at war for the past 35 years, due either to foreign interventions or civil war. By now, the world has seen countless images of Afghanistan – particularly images of soldiers and aid workers. In my experience, these images don’t portray the ‘real’ Afghanistan. They project a young child looking at a camera lens without a smile, or an image of a woman who has set herself on fire to express her despair with life, or images of men, women and children who have lost their arms and legs due to land mines. Photojournalists in Afghanistan become used to seeing such realities, but for me, the real Afghanistan is also a smile on the face of one of those children when they get a chance to take a picture with my camera. It is not the war itself but what it does to the people in it that speaks of their fortitude and courage, and hence the reality of their circumstances.

I may never fully understand the trauma of those who have remained impassive in front of my camera, but I am interested to know how the viewer feels when they see my images. What is the result of all these wars? Every time I see a young Afghan boy or girl in the streets, I wonder how similar children across the world are incompletely different circumstances, which then makes me think of the imbalance. Throughout the lonely and difficult days of war, I kept telling myself  “I’m a photojournalist in the streets of Afghanistan, with the responsibility of exposing the realities of daily life, both brutal as well as joyful.’’ Sharing a common language, I found that I could live alongside the Afghans with an understanding they are rarely accorded while being documented by journalists from outside the country. I feel there is a contrast between the innate tranquility of Eastern culture and the violence of this war, and perhaps some images can express all that words cannot entirely communicate.

Our perpetual war has paved a path of destruction. But it has also blurred many lines.

Dragging on for decades, the war has turned a “survival-first” mentality into a norm for the society. As a people – one that stubbornly continues to pride itself in living by the sword of honour, one that has long carried the burden of our faith by fighting the battles of others who cheerlead from their sidelines of prosperity – we don’t acknowledge this, for our honour does not allow such admissions. But the lines between what is right and wrong, what is corrupt and moral, are forever blurred for us. The warlord that was one once a brute is now a hero after he trimmed his beard and exchanged his fatigues for a western suit. The Communist, who once prided himself in owning nothing but the small Soviet-built apartment, is now the former warlord’s business partner and raking in millions in contracts from the US military. And what of the people they collectively trampled in what they were told was an ideological battle; of Islam vs. Communism, of feudalism vs. equality for all? The people live in a haze of confusion.

How can we still see beauty within these blurred lines? Beauty is the calm of the driver who stops on the highway because a battle is waging, coming out to light a cigarette and chat with other drivers as if they are at a rest station. When the battle quiets, they drive on. Beauty is in the teapot and sugar cubes of the Samovar-chi who sells tea by the over-crowded graveyard because, in true Afghan fashion, tea needs to be drunk even when paying respects to loved ones long gone. Beauty is in those moments unfolding around war – a young boy flying his kite against an overcast Kabul sky, or a Herculean figure flexing his muscles to an expectant crowd before a bodybuilding contest, his veins popping like the traces of a river on a map. Beauty becomes about seeing poetry in these moments – in fleeting transitions and complex contradictions.

All images from the series Life in War 2009-13 Digital 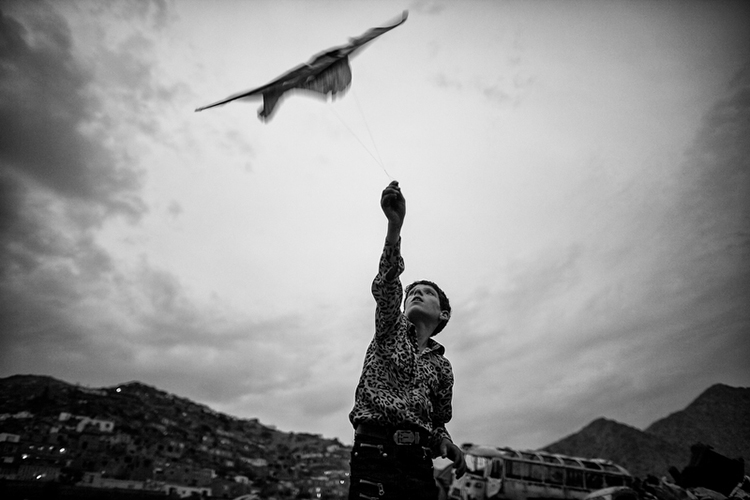 Children playing on their way back from school in Kabul. 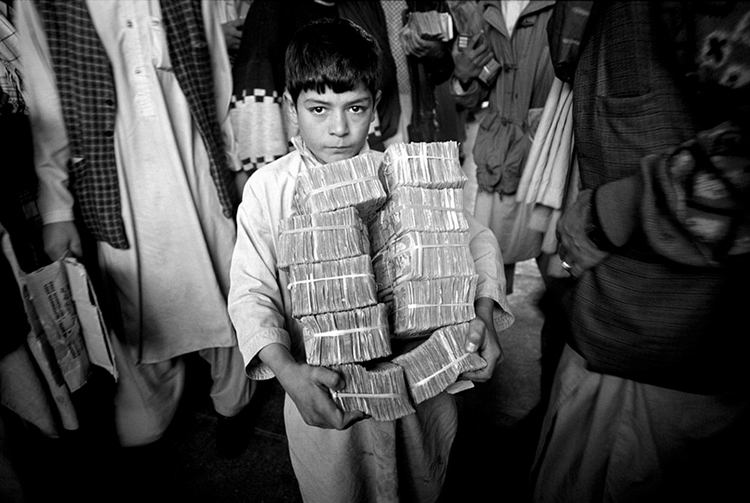 An Afghan boy carries money to exchange in the bazaar at Herat. 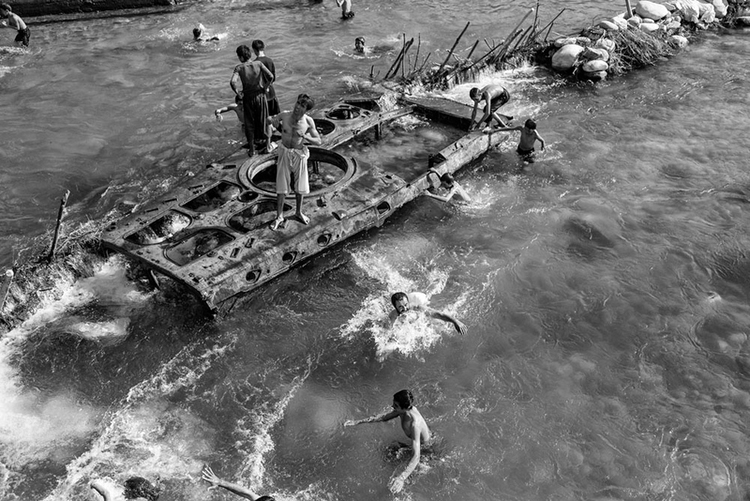 Men swimming in a river located in Feyz Abad, Badakhshan. They use an old tank which remained from the war to dive from. 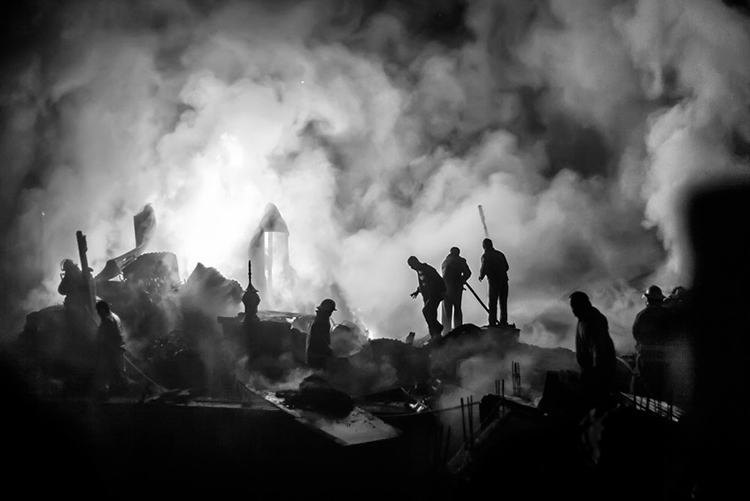 Firemen fighting a fire triggered by a bomb blast in a bazaar in Kabul. 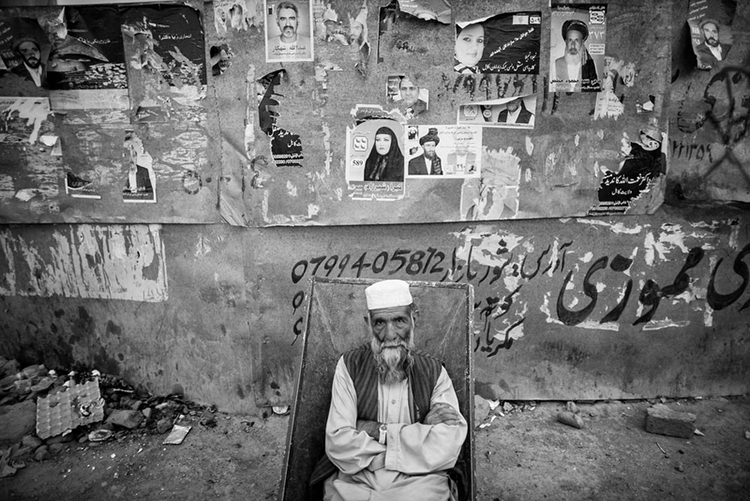 An Afghan man in the bazaar in Kabul.

Training maneuver for the Afghan police force in Kabul.

Photos of Afghanistan Parliament members in front of the Parliament in Kabul. 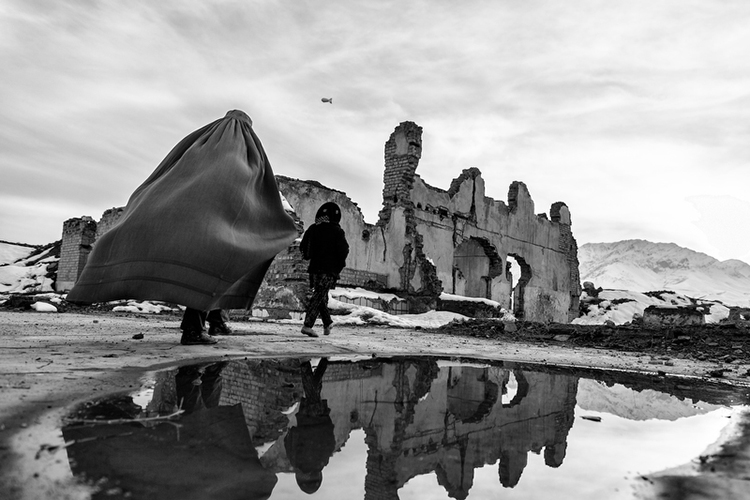 An Afghan woman and her child pass through ruins in Kabul. 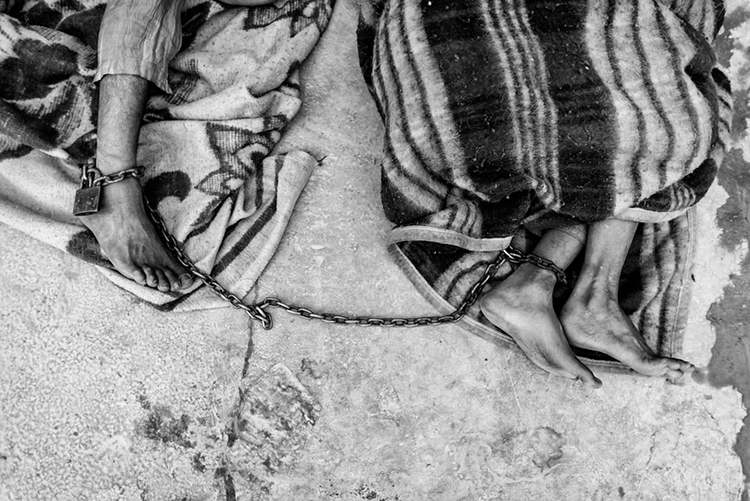 Two mentally ill Afghan men in an asylum in Kabul.

Afghan men wait for a bus to return to their village in Bamiyan, where the Buddha sculpture was destroyed by the Taliban. 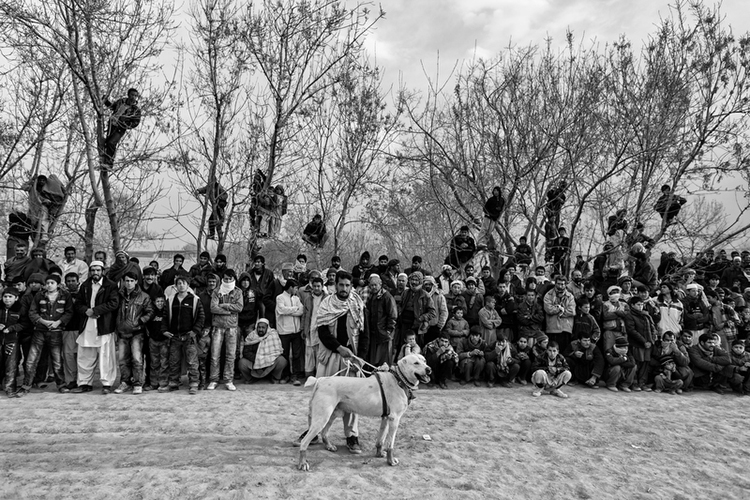 Dog fighting remains a popular form of entertainment in Afghanistan.