I first travelled to Kabul in 2006 where I began collaborating with Afghan filmmakers and crews, working on productions for motion pictures as well as local TV channels. As a result, most of my time was spent around a group of people who were involved in media– screenwriters, camera persons, directors, editors and assistants on a number of sets. Sometimes I would be a part of the production and at others I would just be observing, usually taking photographs from a vantage point with an overview of the entire scene, a film still of the entertainment and enterprise unfolding around me.

These images were shot at different times with two different directors, both iconic in their own way. The first set was shot in 2007,during the making of Opium War, directed by the internationally acclaimed filmmaker Siddiq Barmak (who also made Osama, 2004). The location, which was kept secret during filming, was actually in the northern mountains of Afghanistan, near the town of Pul-e-Khumri which was also known for housing Afghanistan’s first cement factory in 1954 supported by former Czechoslovakia.

The second film shoot occurred from an engagement over several weeks in 2011, spent with the bombastic and highly popular actor/director/producer, Salim Shaheen in different locations in the Shomali (northern) plains, shooting Sarzameen-e- Dilawaran, a film based around a jailbreak during the civil war. It was older generation that had learned the craft as students in Russia or Europe. Virtually all were marked in some form by exile – either having left their homeland or seeing it drastically change from within. Many made films as away to learn about the places they had always imagined as home, but had never really known.

Salim Shaheen, whose work is also seen here, is one of the most commercially successful directors and producers in Kabul. He often also plays the hero/protagonist in his own films, and is viewed as a true star who draws large crowds when his films travel. His features crackle with energy and melodrama, as the actors or locations are slathered with fake blood and pulsate with dance sequences. When I asked one of his actors why he made such ‘over the top’ productions, I was told that it was to give dreams and hope to those who watch them.

Cinema in Afghanistan, like cinema inmost places, is made up of several strands: popular entertainers, family drama and arthouse fare. As a consequence, Shaheen’s films constitute just one kind of cinema in the region that is part of a larger, diverse scene. It includes productions by the state-run Afghan Film Industry, edgy experimental features by young Afghans, the popular Pashto films made in Jalalabad as well highly stylised social commentaries of the kind seen in Osama(2004), Afghanistan’s Golden Globe winner for best foreign language film made on a shoestring budget and completed in about three months. Given the situation both directors worked with a large number of non professional actors, but to very different ends.

“Because We Have Suffered, Don’t We Deserve Joy?”

Siddiq Barmak, some of whose work appears in these images, once told me about what drives him as a filmmaker. We were in the mountains in northern Afghanistan where he was shooting his second feature. The location had been kept secret for security reasons. I watched his characters emerge from the wilderness, vanish into tanks hollowed out to create homes. Men danced in coloured chadoris (veils) to tunes from beautiful Nuristan, located to the east of the country.

“Don’t write about this until we leave,” the crew repeatedly told me out of concern for the safety of the team. Why did he make movies? I asked Siddiq. (Meaning how did he make movies in the middle of all the chaos and threat?) “To remember the history of my land”, he said. “To make others remember it.”

Afghanistan is usually represented by non-Afghans in cinema and as well as other mainstream media. But in the years after 2001, a determined group of filmmakers starting creating their own visual narratives drawing from the cultural history of the nation and by referencing its fables. Many of them were still young, but there was also a slightly. When the Taliban seized power in 1996, they captured a capital already ravaged by years of civil war. They closed the cinemas, banned the viewing of films and cracked down on TV and other forms of entertainment as well as media – unconstitutional laws which were in place until the defeat of the Taliban in 2001. The images featured in this section were taken in the years following the US-led overthrow of the Taliban government and during the international effort to ‘rebuild’ Afghanistan – a time that was not quite war time, but not entirely peaceful either. They record the adventure of making movies in Afghanistan, its influences and how they were moulded to tell Afghan stories. For me, they also form a portrait of the people who made films, despite unbelievable odds – in terms of resources, accessibility and safety.

In many cases, I saw these pictures being taken, standing in the mud and slush that frames them, and at the time they seemed like flashes snatched on a ride that showed no signs of slowing down. Looking at them now is somehow more complex. They appear as documents that narrate stories of the history and aspirations of Afghanistan, of attempts to recast the past and shape the present into images in a dynamic way, preempting a more liberating future. I once asked a director why, with all the troubles in his country, he was focused on making films. “Because we have suffered, don’t we deserve joy?” he replied.

All images from the series Two Afghan Films By Asad Hussain, Afghanistan Digital

The climax of the film Sarzameen-e-Dilwaran, when the villains set a village on fire. As there were no actresses on the location, a bearded actor was thrust under the chadori (veil) to show women fleeing the flames. Shomali Plains, 2011

On the sets of Opium War, directed by Siddiq Barmak, the crew prepares a shot in the poppy fields grown especially for the film. Pul-eKhumri, 2007

Underground, shooting the ‘home’ of a family that lives inside a tank, from Opium War. Pul-e-Khumri, 2007

Shaheen directs a corpse floating down the river. Other actors, and often the audience of young men and boys from nearby villages, joined in to give instructions to the actor lying quietly in the water. Shomali Plains, 2011 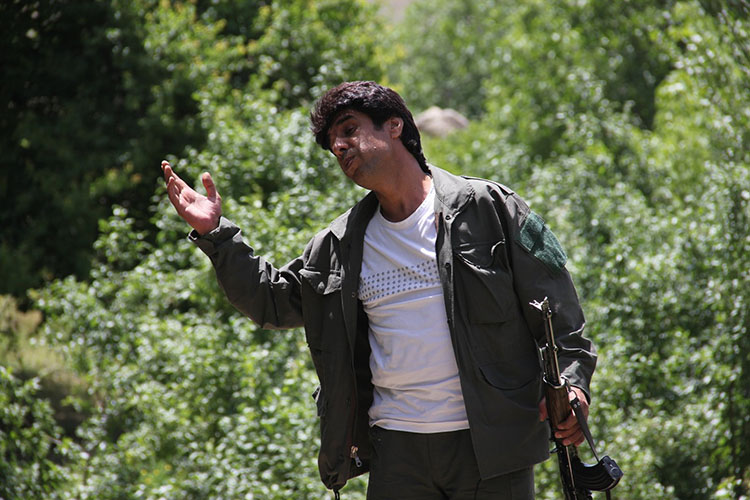 Shooting a song sequence. The actor lip-synced the lyrics about the sweetness of being free, as the song played on a tape recorder placed on a nearby rock. Shumali Plains, 2011

On location for Salim Shaheen’s historical drama, Sarzameen-eDilawaran, his son Zahir Shah takes stills of the actors posing with their weapons. Shomali Plains, 2011 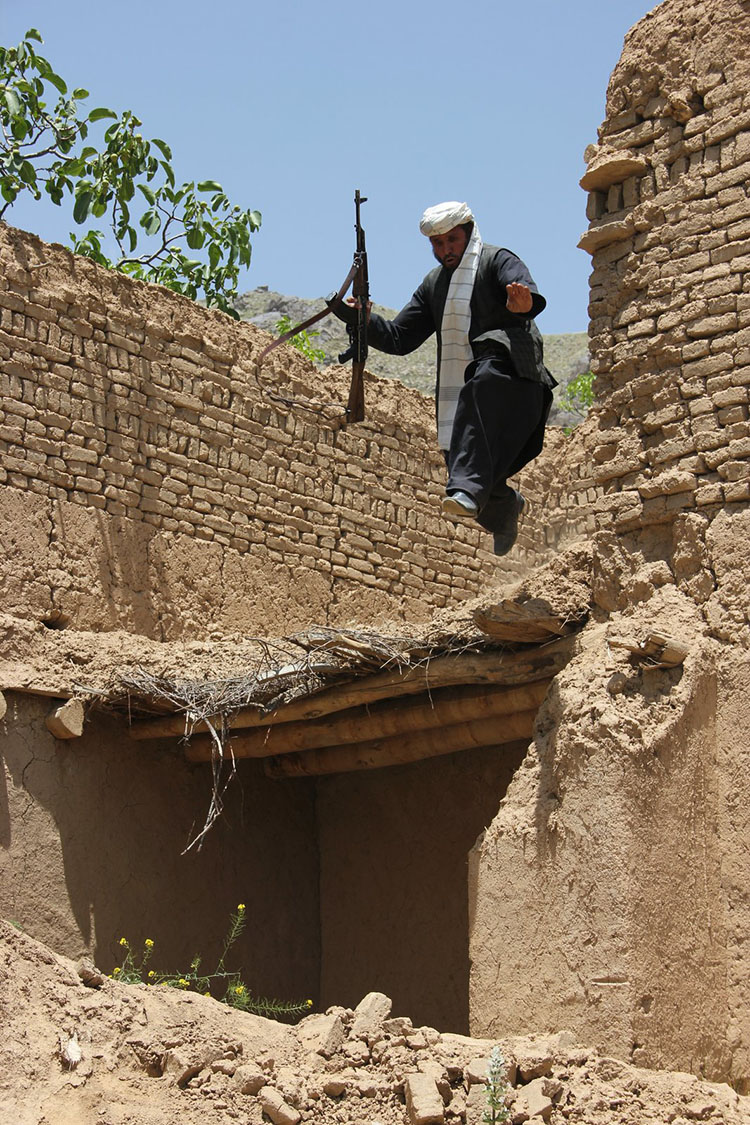 Shaheen’s older son directs a deaf-mute actor in an escape sequence, while also shooting behind the scenes video of the film. Shomali Plains, 2011