Between Grief and Nothing

This series began following the recent earthquakes in Nepal that killed nearly 9,000 people and affected another 2.8 million. Over 300 strong aftershocks within a month drove fear into people’s minds, a psychological trauma, instilling doubt, uncertainty and the anxiety that another one could abruptly cut short their lives. Continuous aftershocks challenged their resoluteness while the media continued selling tales of ‘resilience’ to the world on primetime television. Spending one month in the middle of this unfolding disaster, I watched people caught in a state of suspension between two unpredictable worlds: one secure and the other obscure and indeterminate. Drifting from one space to another, it was evident that the agony was setting in.

I was eager to further explore the concept of trauma, to begin with, in a clinical manner. In a recent research exercise conducted at the Sleep and Circadian Neuroscience Institute at Oxford University, the team found that ‘Sleeping after a traumatic event or going to bed angry could make bad memories and flashbacks worse.’ In other words, sleeping after a sudden high-stress event could substantially augment the possibility of Post-Traumatic Stress Disorder.

In order to animate such a condition, this current series was construed as an artistic response to the aftermath of the earthquake, attempting to depict a dystopian state of mind. Fear made a home in the hearts of so many people in Nepal and they began sleeping outdoors, anticipating what may happen to them in an unconscious state. The streets filled up after sundown; but sleep still evaded them – Nepal stayed awake night after night as trauma centres in hospitals ran out of beds.

As I began to think through my photographic series, I met Professor Suresh Dhakal, a cultural anthropologist (and Professor of Sociology at Tribhuvan University) in Kathmandu for advise. He mentioned that masks constitute an intrinsic part of Nepal’s mythological past and active present. And so, Lakhey, a demon god from Newari mythology surfaced as an anthropomorphic form, giving shape and form to the narrative within the series, and I eventually set out to enquire from the local population about the significance of Lakhey as a mythological character in current religious or cultural scenarios.

In a fictional documentary mode, I have tried to create a hyper-real imaginary space using Lakhey as a code. Lakhey, a Demon-God (deeply feared even today in Nepal) in the narrative is seen emerging in the frame, or watchfully lurking around people as they sleep. In written references, ‘He wears a huge red, terrifying mask with prominent eyes, protruding fangs, serrated teeth; a dark red wig and disheveled red tresses complete the awe-inspiring countenance of the man-eating demon as he dances and thrashes his limbs. It is believed that the spirit of the Lakhey resides in the demonic mask. As the performer puts the mask on, the spirit takes over’.

In my depicted version, once he travels from his home in the forests to the cities, he goes about recklessly destroying everything in his path. The red hue from Lakhey’s mask and clothes seeps into the people’s psyche, permeating their surroundings, casting a fierce colour around and even on them. The series rests on the juxtaposition of elements situated, often in the affected regions. This incongruous, yet significant contextualisation was necessary to convey a sense of actual destruction. Psychotherapist Carl G. Jung in ‘Psychology of the Unconscious’ speaks of symbolism and mythology as ‘the natural languages of the unconscious’. To me, this narrative series constitutes intersections between mythology, symbolism and performativity – a documentary fiction. My idea was to find an alternative approach to dominant Western iconographic systems emerging out of Christian art, by seeking aid from codes resting in a specific spatial context, in order to root the tragedy in the reality, not only of place, but of Nepal’s folklore and cultural imagination.

All images from the series Between Grief and Nothing Kathmandu,
April-May 2015 Digital
Model as Lakhey: Sujan Bajracharya
Creative & Production Assistant: Sushant Shrestha 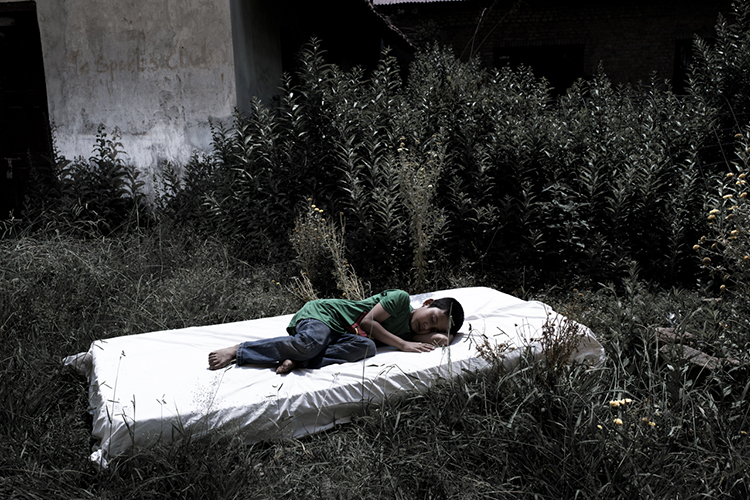 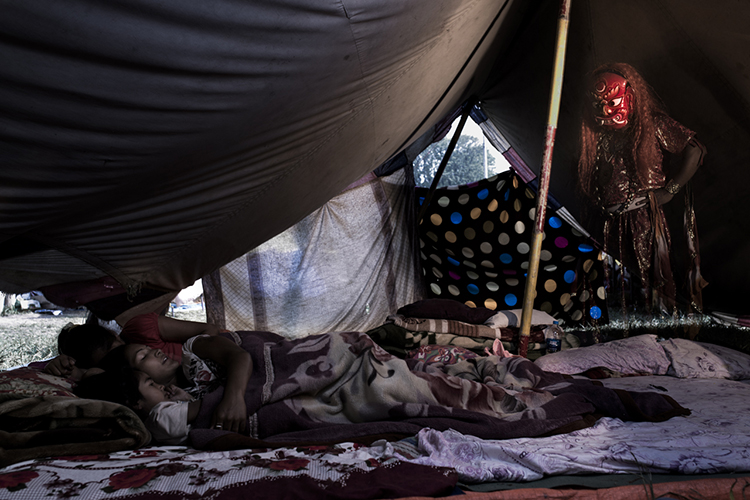 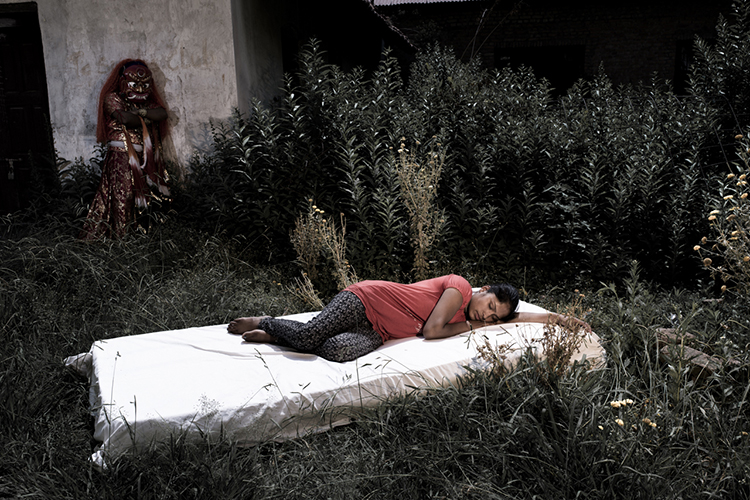 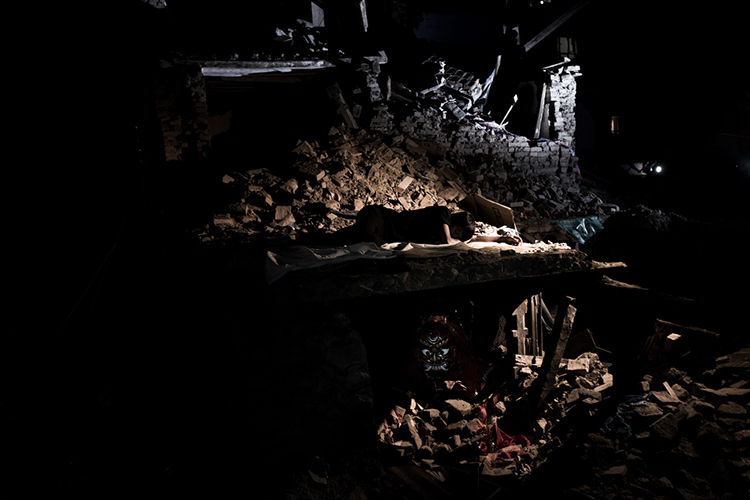 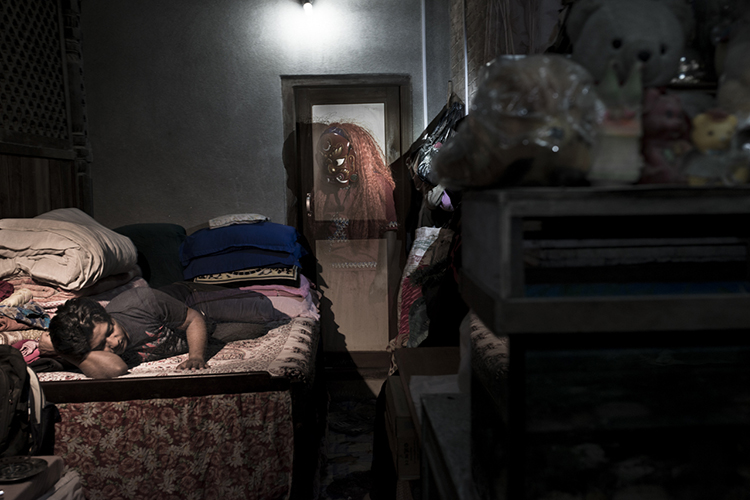 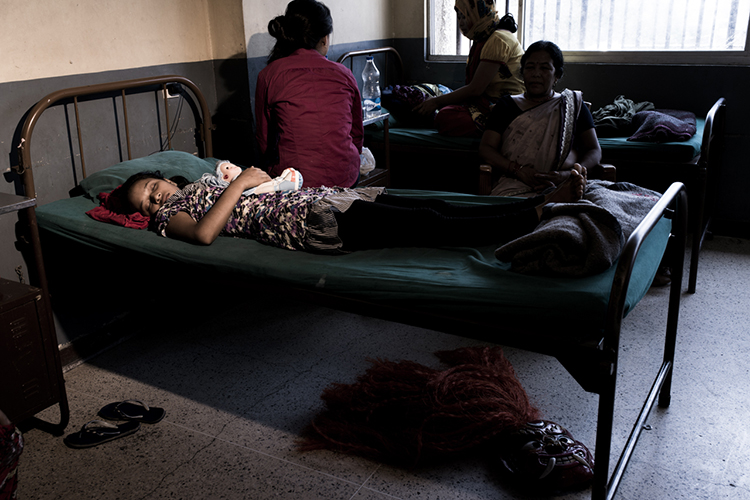 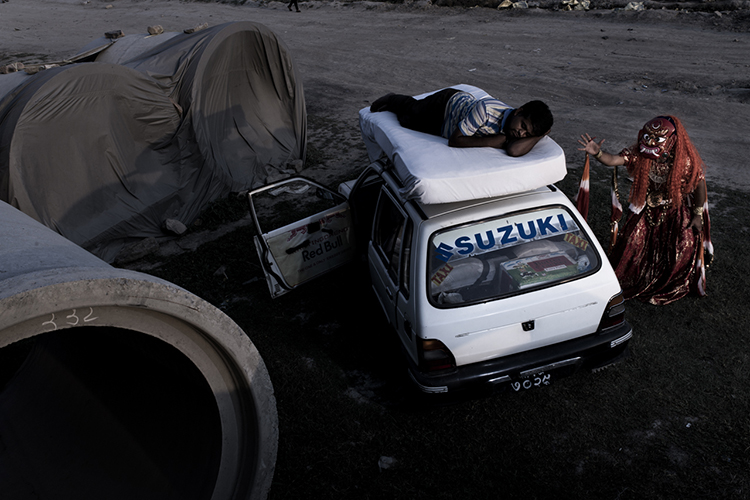 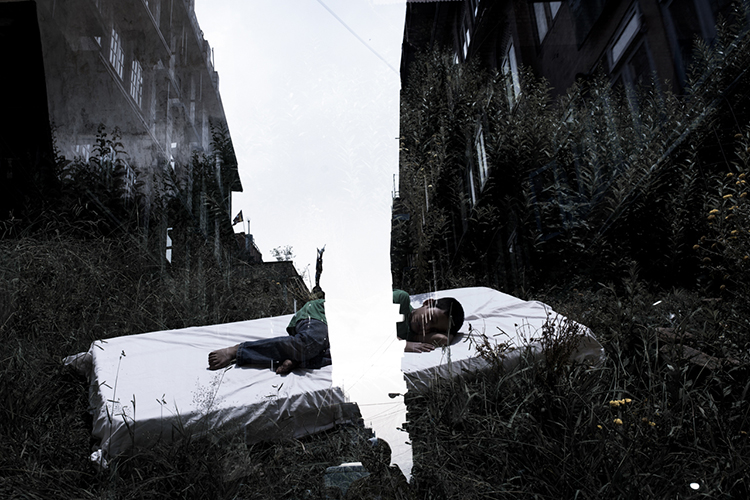 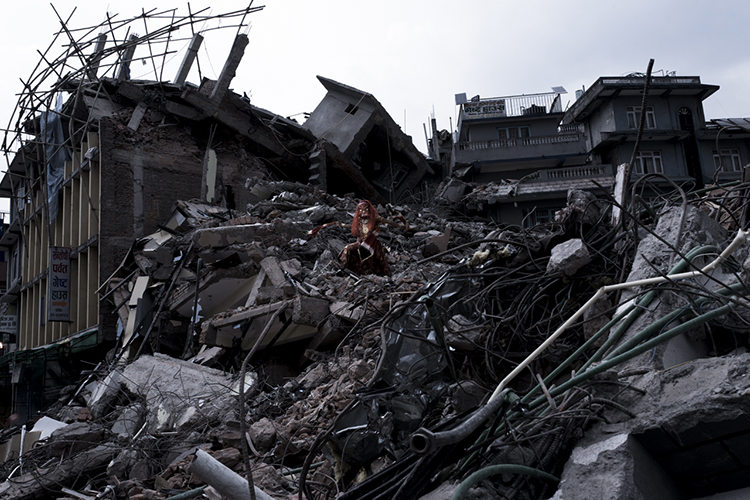 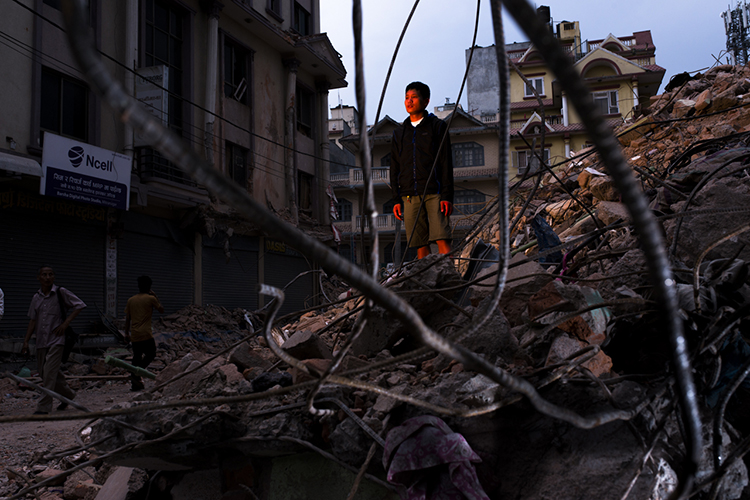