It was a search for the elusive Maoist guerrillas that first brought me to Nepal in 2001, a period after the Communist Party of Nepal (CPN, Maoist) launched the ‘People’s War’ in 1996. Only weeks after landing in Kathmandu, I received a phone call asking me to be at my hotel in half an hour. Upon returning to Durbar Square in front of the old Royal Palace of the former Kathmandu Kingdom, I found a young boy, all of 12 years old, waiting for me. He spoke no English but gestured for me to go with him. We bought bus tickets and alighted 27 hours later in Surkhet, where, after showing me a hotel, he simply walked off. The following morning, a cadre arrived. With my gear slung, we walked down the main street under inquisitive eyes until buildings gave way to sloping contours and the hills swallowed us. We continued our walk the following day after a night in a hill station, turning a bend after some hours to be greeted by a dozen Maoist guerrillas with garlands and tika, rifles held high to create a tunnel through which we walked. From the roof of a dilapidated building I addressed the assembled group as requested before marching together for Dailekh, a mid-western district in Nepal that also formed the earlier Maoist headquarters. A week or so later, on 2 June 2001, my first morning back in Kathmandu, I awoke to chaotic scenes. Outside my window, unruly crowds mobbed newspaper vendors. I rushed down and, after a brief and futile attempt to queue as my English upbringing demanded; I fought hand and fist for a paper.

“What does it say?” I asked my hotel manager. “It appears the Royal Family has been massacred!” The mediaeval scenes that I was privileged to witness in the days that followed, imbued me with a deep-rooted sense of responsibility to the Nepali people – to capture and tell their story. The Crown Prince Dipendra Bir Bikram Shah (1971-2001) was indicted for the murder of 9 family members at a monthly reunion dinner before taking his own life, leading to an intensification of the civil war in the country, following the collapse of a cease-fire between the Maoists and Royal Nepalese Army. I was determined that I would return whenever I could to document their unfolding struggle.

A demonstrator climbs a flag pole and hangs over police lines at a mass rally aimed at pressuring King Gyanendra to step down in Chabahil on the ring-road. Kathmandu, April 2006, Medium format 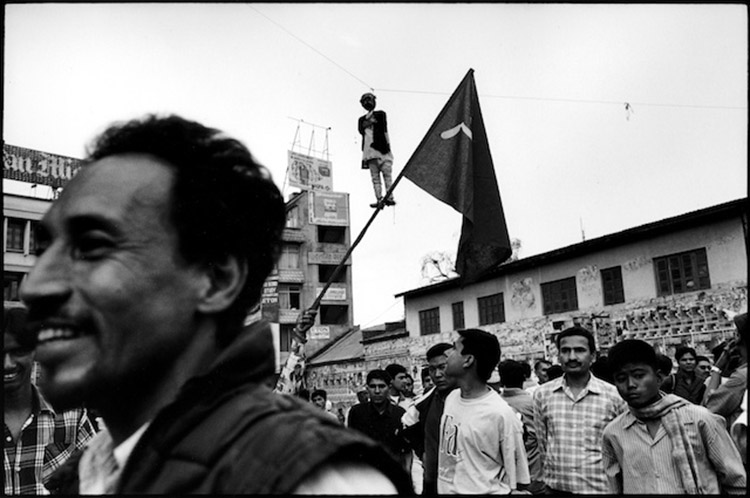 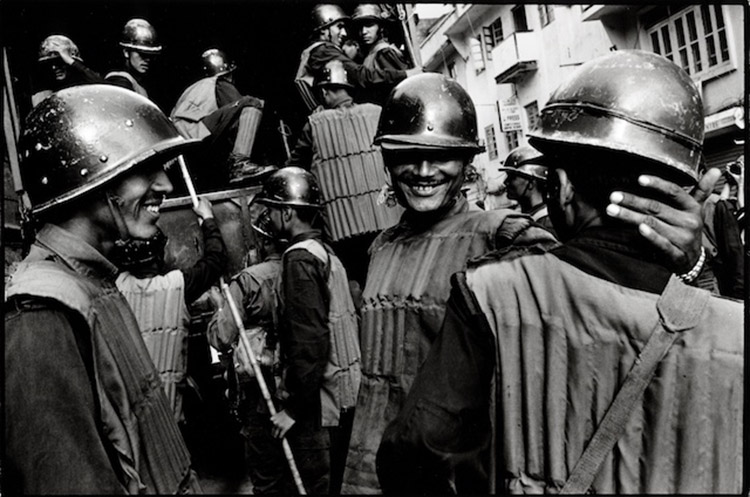 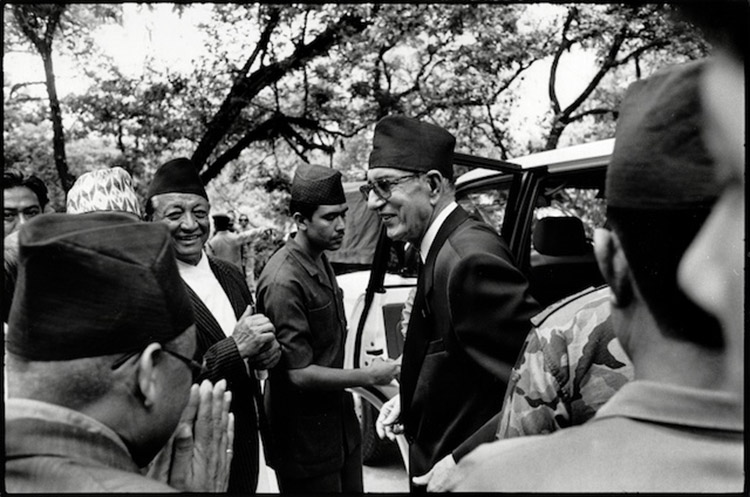 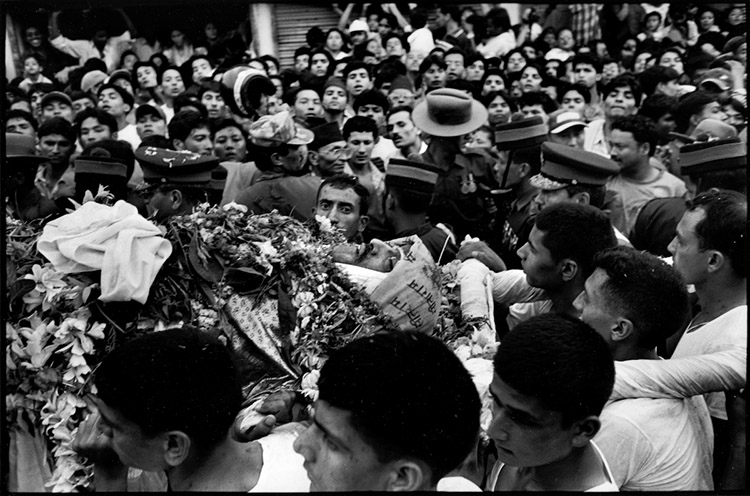 Slain King Birendra is carried through the streets of Kathmandu by his bodyguards. June 2001. All images: 35 mm 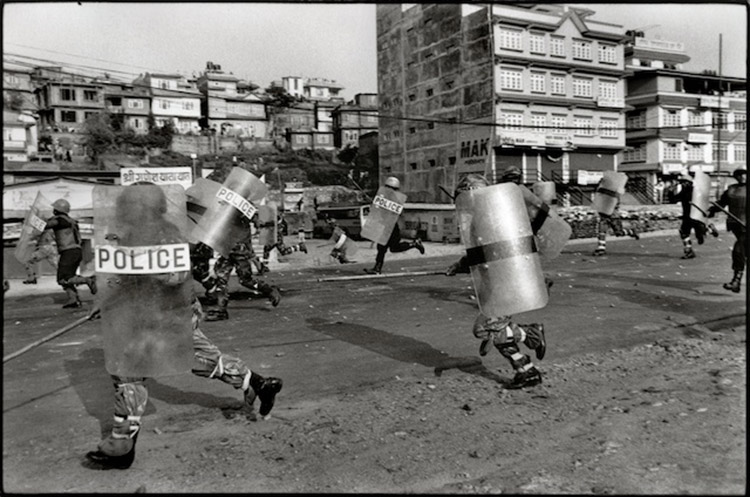 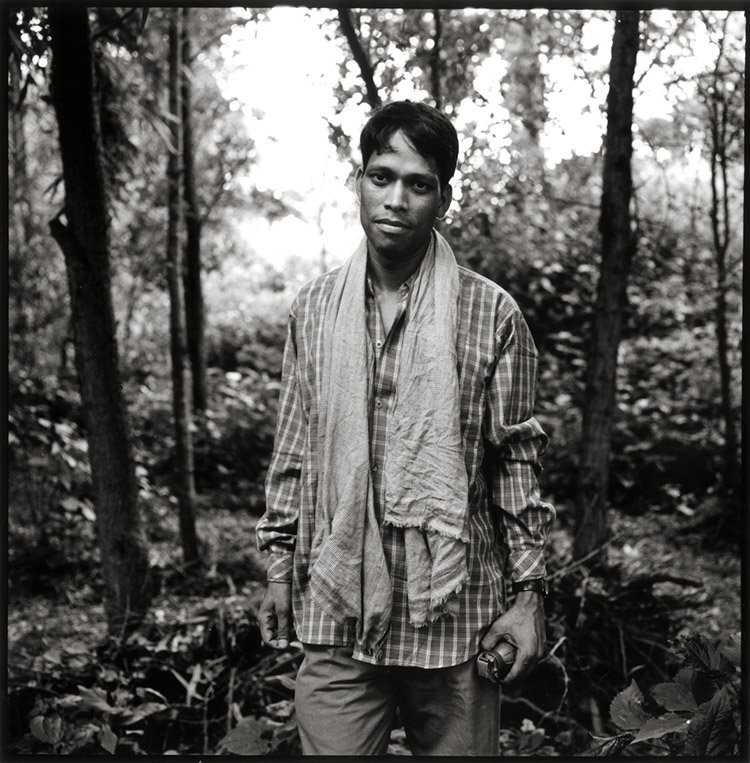 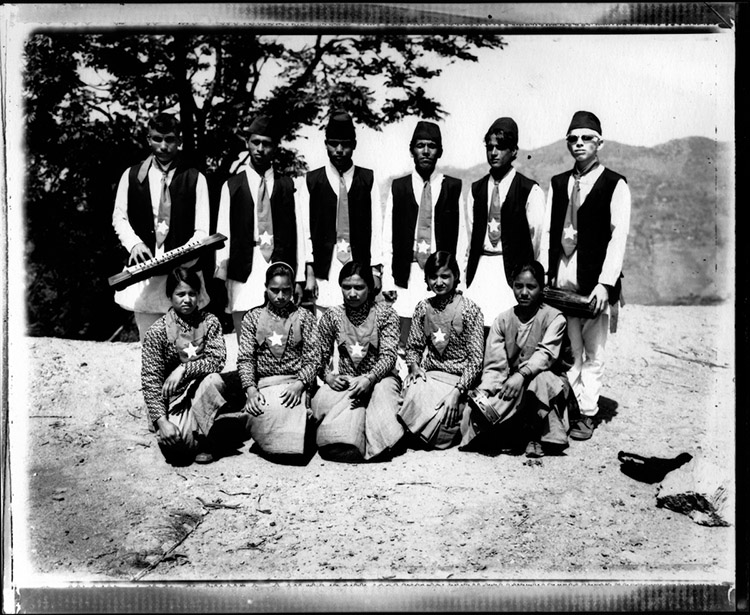 Female Maoist guerrillas and their male counterparts sing revolutionary songs and dance around a gas-lantern north of the Rajapur Delta, 2004 Reconstituted panorama, 35 mm

The scene at a polling booth during elections in Kathmandu, February 2006

Female Maoist guerrillas and their male counterparts sing revolutionary songs and dance around a gas-lantern north of the Rajapur Delta, 2004 Reconstituted panorama, 35 mm. 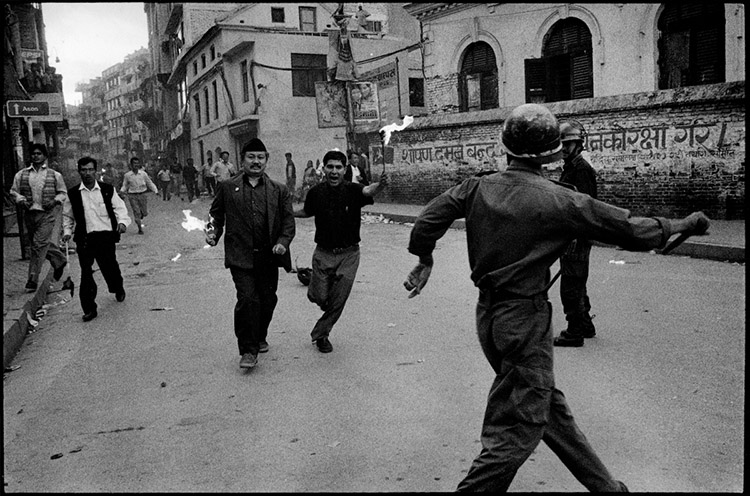 Demonstrators calling for the resignation of PM Koirala and with a focus on allegations of corruption, take to the streets with flaming torches. Kathmandu, 2001 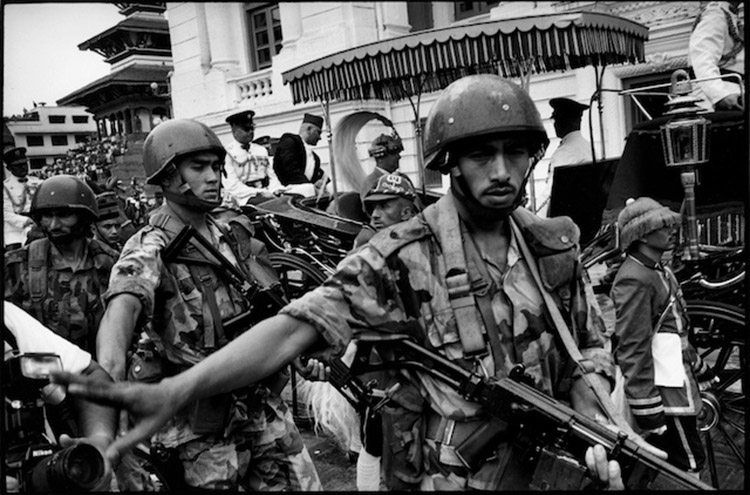 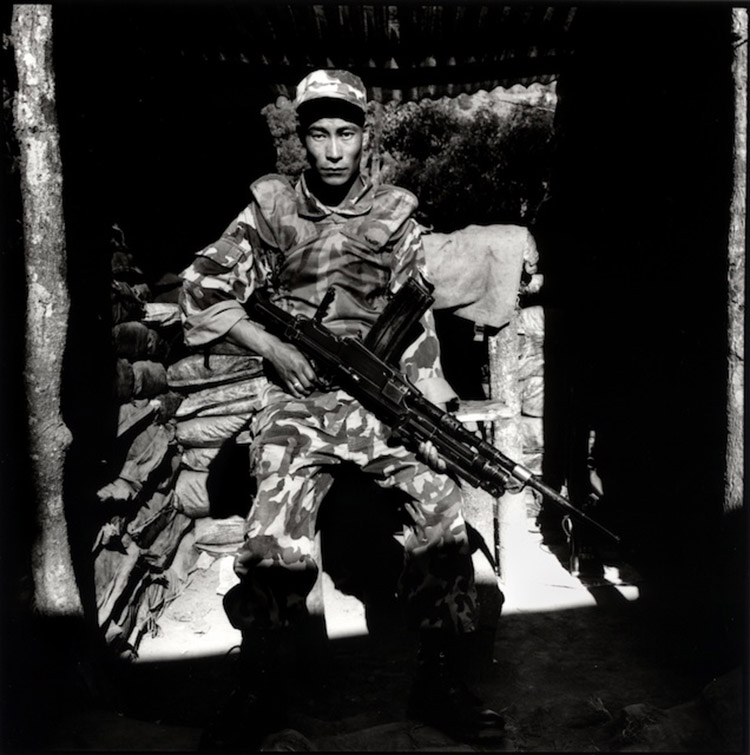 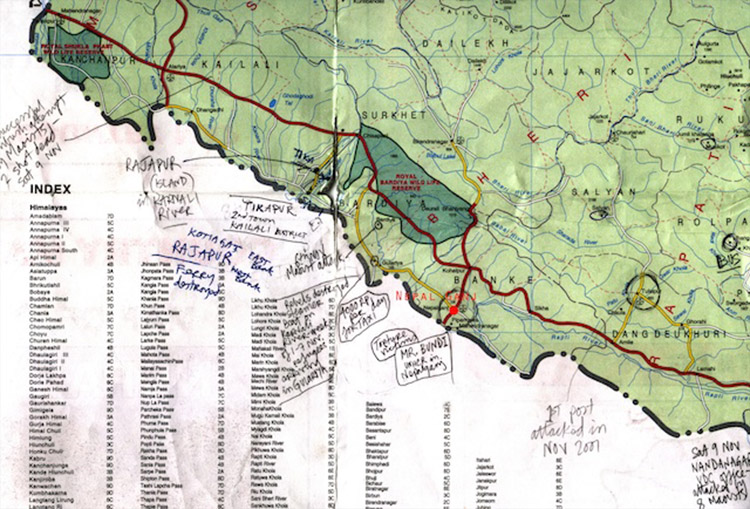