This Country is Yours

My ongoing work, This Country is Yours (2012 – present) takes Kathmandu as the geographic setting during the historic process of writing Nepal’s new constitution. The charter was recently promulgated amidst objections from historically marginalised groups. During the drafting of this document, the focus of my images was and continues to be on activists from six social and political movements: indigenous nationalities, women, Dalits, Madhes, religious minorities, and the LGBT community. I want to embed the faces of the activists in Nepal’s history by integrating art with activism so as to intervene in the tremendous representational deficit faced by the aforementioned groups. 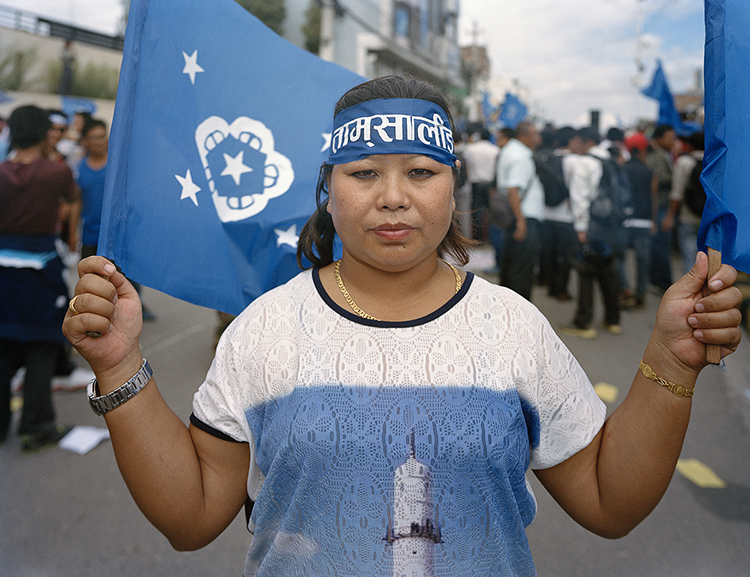 Junu Pun Magar, Vice Chair, Youth Federation of Indigenous Nationalities at a protest rally against the regressive and discriminatory draft constitution organized by Tamsaling Joint Struggle Committee, 2015. One of the unfortunate consequences of the declaration of Nepal’s constitution has been the use of the twin earthquakes that hit Nepal in April and May (2015) as an excuse to expedite the draft, thereby ignoring the rights of a large section of the population. After the earthquake, major political parties banded together to draft a regressive ‘fast-track constitution’ during the monsoon season, when Nepalis from the rural regions were working the land, while urban residents were picking through the rubble of their broken homes. 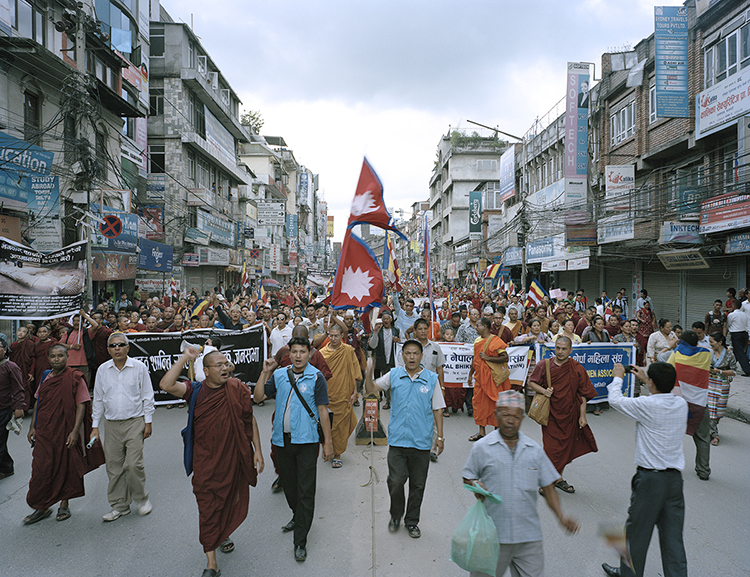 Street rally in demand of reinstatement of Buddha’s statue in Kakhre Bihar, 2013. A coalition of Buddhist organizations, partnered with the Nepal Federation of Indigenous Nationalities, and took to the streets on August 23, 2013, declaring their opposition to the government’s decision to remove the Buddha statue from Kakre Bihar in Western Nepal. 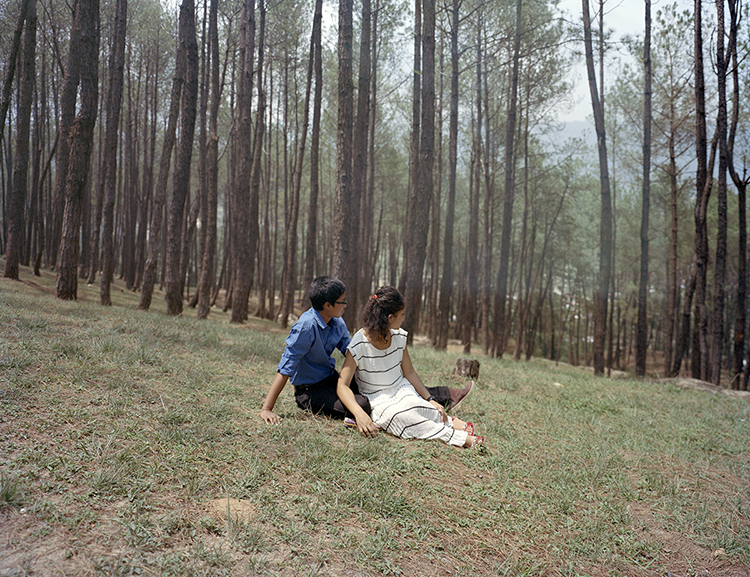 Prajwal Bajracharya, Board Member, Mitini Nepal, and Manju Lamichhane, 2014. Mitini Nepal is an organisation working for the welfare of lesbians. Prajwal, a schoolteacher, and her partner, Manju, are a young lesbian couple. One of the challenges of photographing members of the LGBT community is that many of them do not want to disclose their identities. Many of the members of Mitini Nepal moved to Kathmandu from different parts of the country and freely express their sexuality. But many of them have not disclosed their sexualities to their socially-conservative families. Prajwal and Manju were open to being photographed as long as this image was not exhibited or publicised in Nepal. 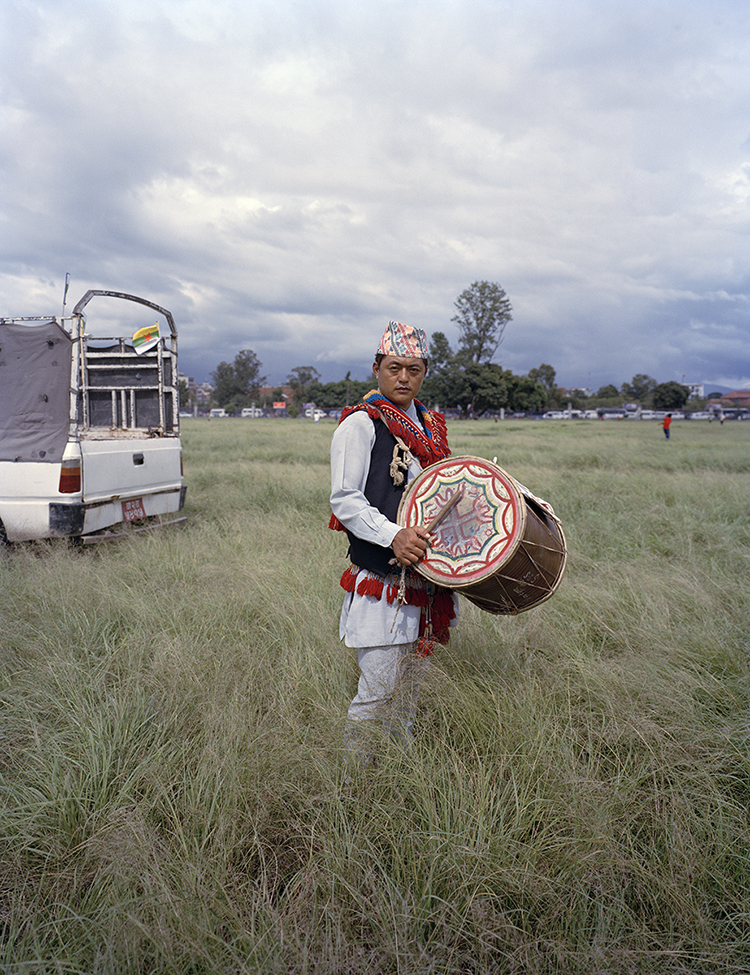 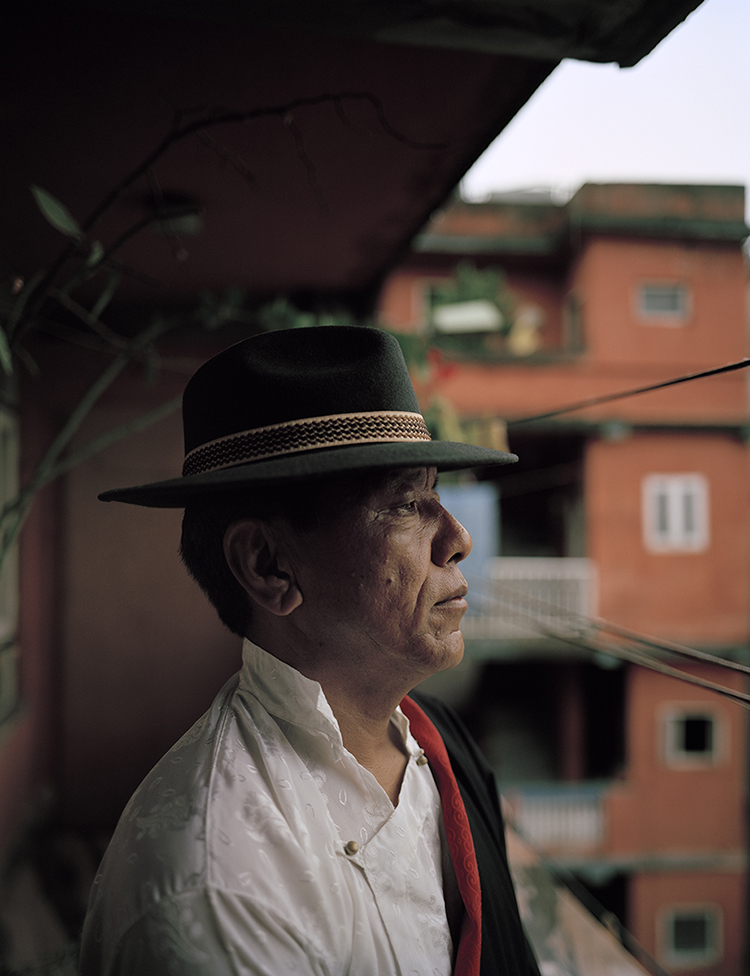 Ang Kazi Sherpa, General Secretary, Nepal Federation of Indigenous Nationalities, 2012. According to Nepal’s last census, 37.5% of the Nepali population is made of indigenous nationalities. The indigenous people have been historically marginalised by ‘high caste’ Hindus, who dominate Nepal’s legislature, judiciary, bureaucracy, politics, media, security sectors, intelligentsia, and civil society. The marginalisation was a result of Nepal being a constitutionally Hindu state until 2006, which favored the high castes. 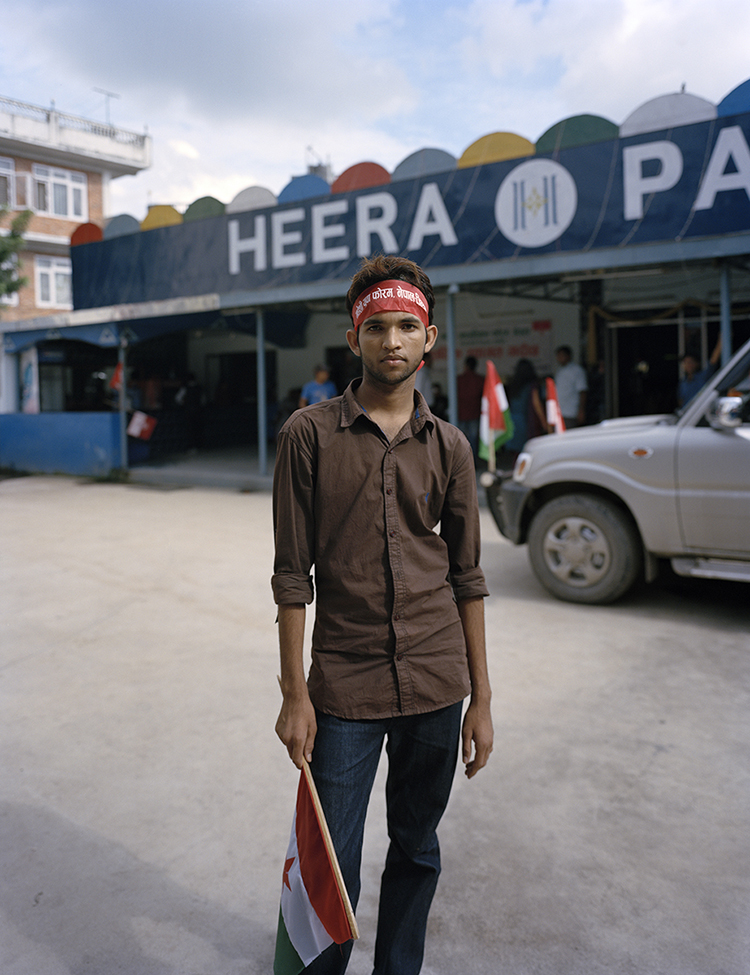 Rajesh Kumar Chorwar, Madhesi People’s Rights Forum, Nepal’s New Members Induction Program, 2013. The Madhesi people from the southern plains of Nepal bordering Bihar and Uttar Pradesh of India have distinctly different languages and physical features from the majority Nepali hill people. However, the Madhesis share strong cultural ties with people across the border. The hill rulers of Nepal, therefore, have historically distrusted the Madhesi people and have not included them in governance plans, policy making and security sectors, citing their loyalty to India. Hence, an anti-India sentiment runs among sections of the Nepali hill people. 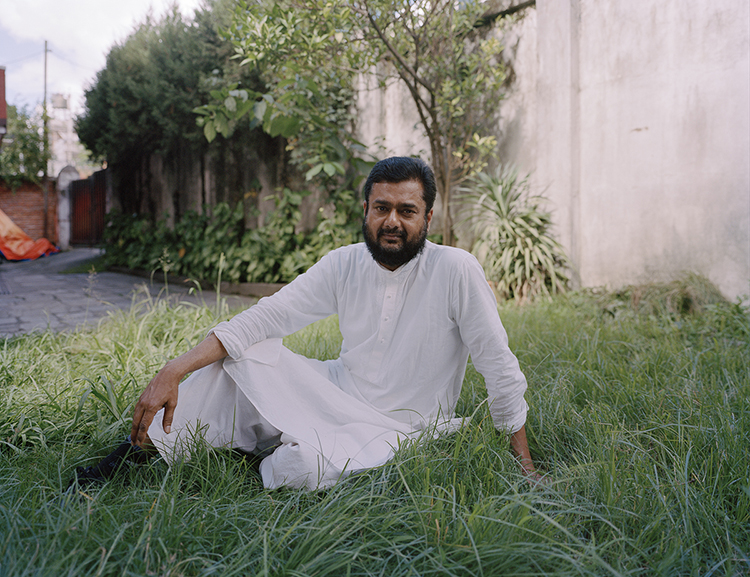 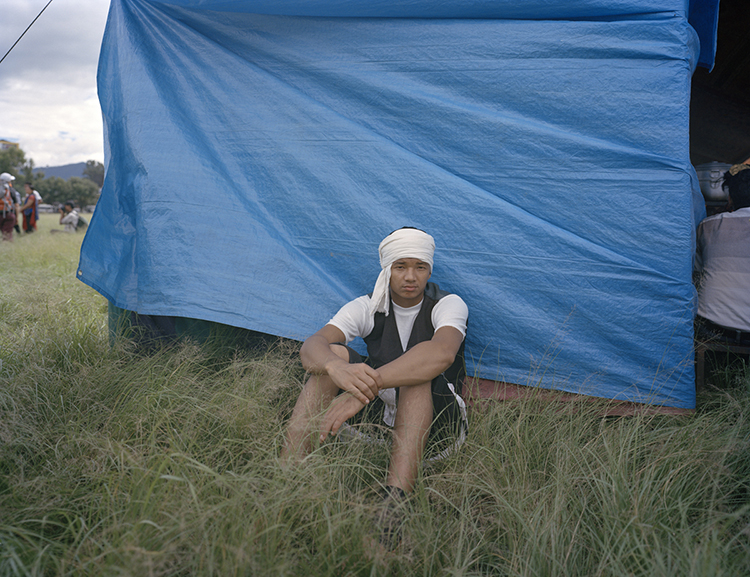 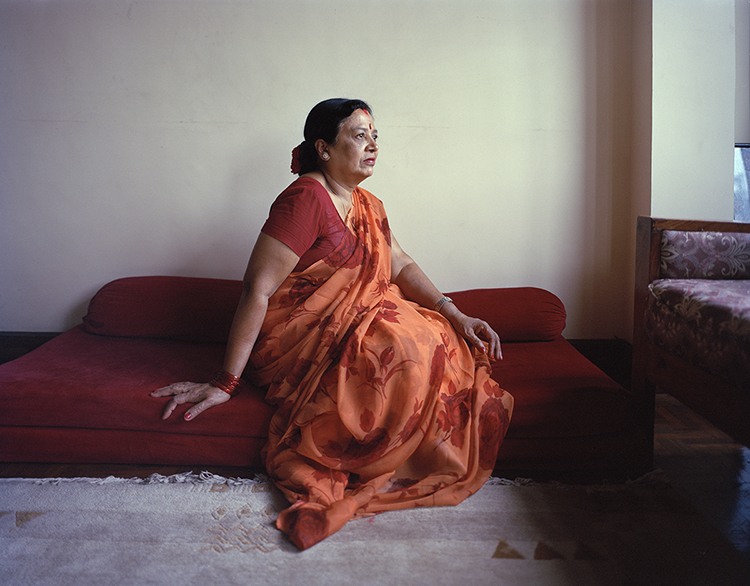 Shreejana Pradhan, Vice President, National Indigenous Women’s Federation, 2013. Shreejana Pradhan teaches Newari at a University in Kathmandu. Newari is the language of the Newars, who are indigenous to the Kathmandu Valley. Language rights have been one of the core issues for the indigenous people of Nepal. NIWF advocates for the rights of indigenous women against ethnic and gender discrimination. 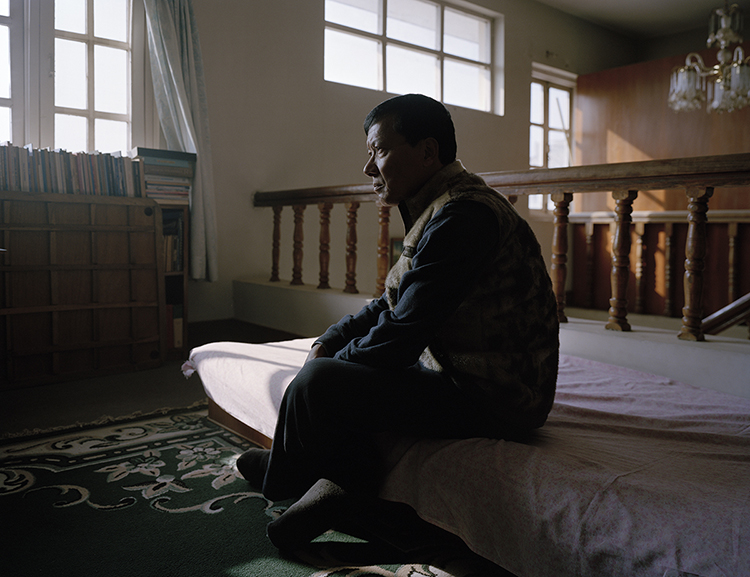 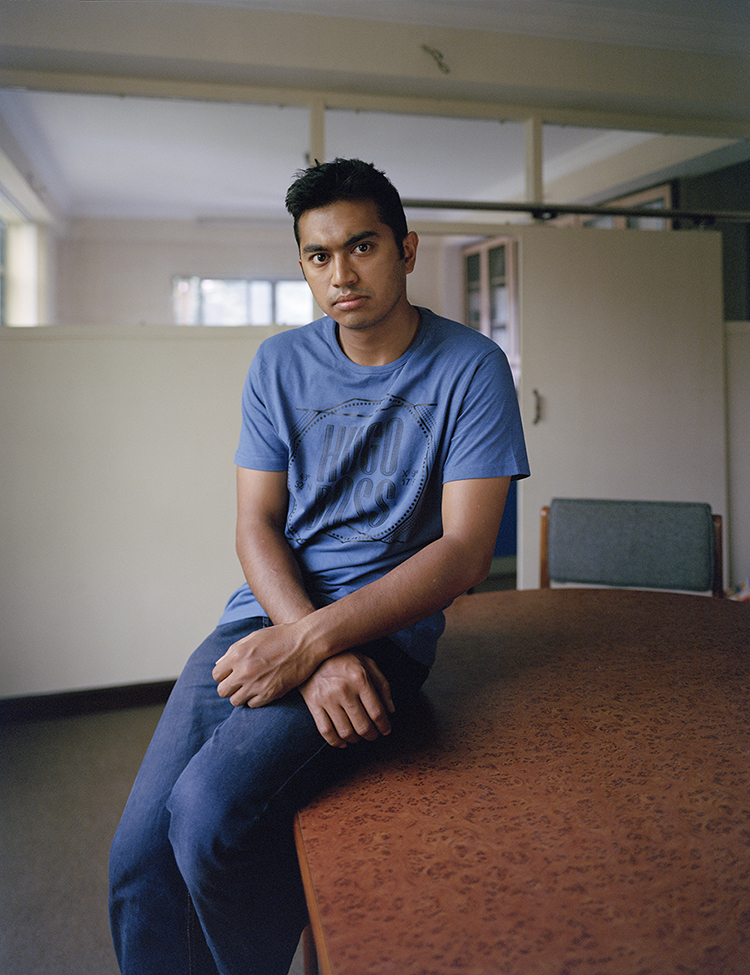 Subin Mulmi, Citizenship in the Name of Mother Campaign, 2015. Nepal’s constitution of 2015 treats women as second-class citizens because citizenship cannot be acquired through the father ‘or’ mother, but only through the father ‘and’ mother. Children of single mothers or children birthed through rape, for example, cannot acquire Nepali citizenship, resulting in millions of stateless children. Similarly, children of a Nepali woman married to a foreigner can only acquire ‘naturalized’ citizenship as opposed to via ‘descent’. 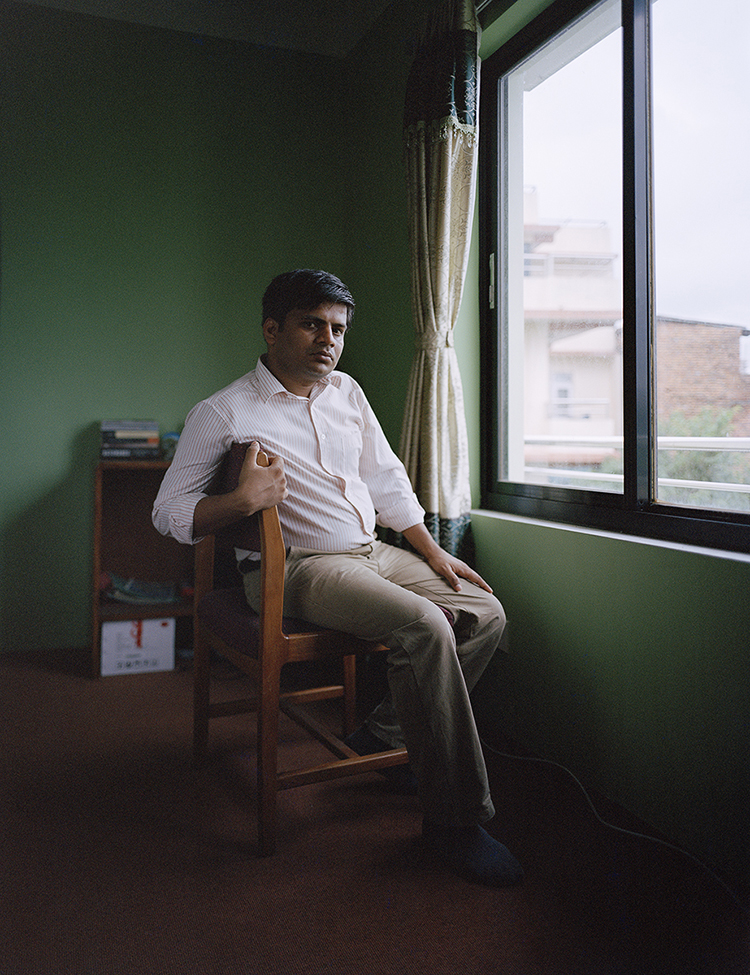 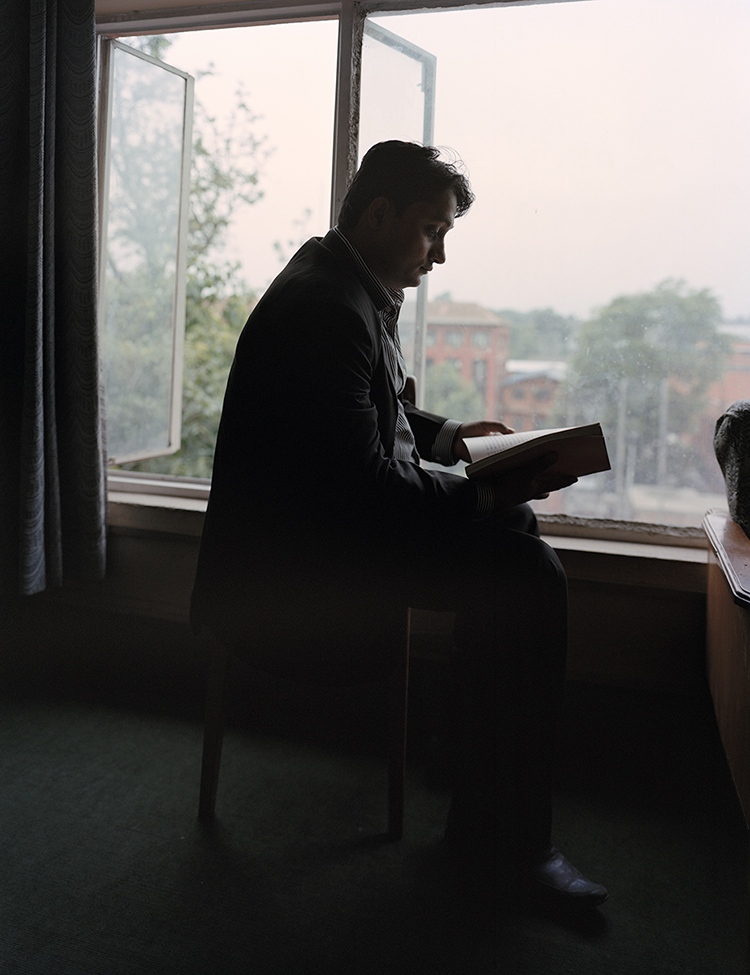 Dipen draJha, Advocate, Supreme Court, 2014. Dipendra Jha has been one of the champions of the Madhes movement. As a lawyer, he has single-handedly fought many cases on discrimination in the Supreme Court. He is also constantly educating activists, lawmakers, and members of the public about the obtuse language used in the constitution.

Hat Vendor,  Ratna Park, 2012. Topi is the hat that is part of the national dress for men called daurasuruwal. The hill men of the upper castes traditionally wear daurasuruwal. The national dress is well suited for the lower hills, but not for the mountains or plains. For example, the Sherpas, who are native to the high mountains, prefer to wear headgear that resembles cowboy hats to protect themselves from the high altitude sun. Similarly the topi or daurasurwal is not suitable for the hot climate of the plains, as people prefer to wear the traditional dhoti. However, when applying for citizenship, all Nepali males must provide passport-sized photos wearing this topi. 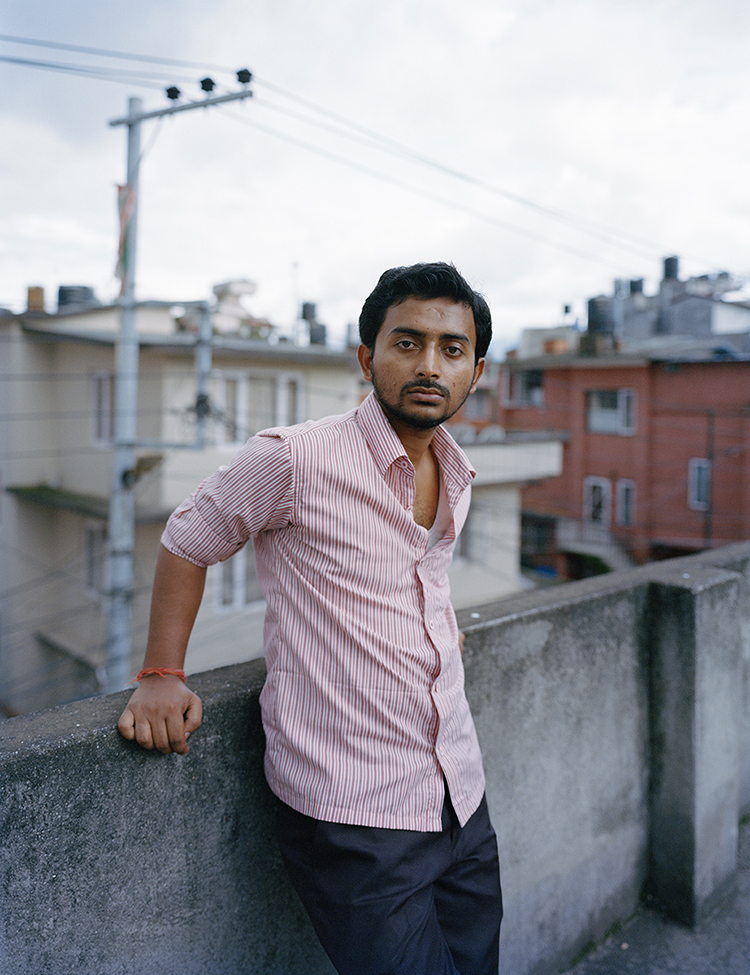 Pankaj Kumar Mishra, Member, Central Committee, Sadhbhavana Youth Front, 2015. One of the contentious debates in the drafting process of Nepal’s constitution has been about state restructuring – demarcation of the state into federal units. It was the Madhesi people who brought this issue to the central political debate after two Madhes uprisings in 2007 and 2008. The Madhesi people have understood that the autonomy of their own federal unit is the only way out of the historic discrimination within the Nepali state. Pankaj was a child when the two Madhes uprisings took place, and his impressions compelled him to join politics. The youth force behind ongoing demonstrations, some of which have lasted over 115 days indicates that a younger generation is keen to join active politics. 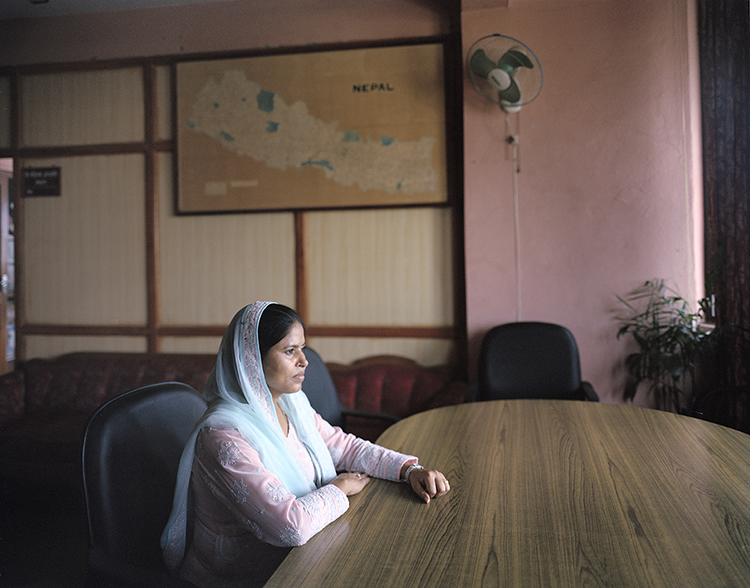 Mohna Ansari, Commissioner, National Women Commission, 2013 Mohna Ansari is considered to be the first female lawyer from Nepal’s Muslim community. Nepal’s Muslims make up around 6% of the country’s population. One of the demands of the community, along with other religious minorities mentioned in Nepal’s new constitution, is to have a secular state. However, in the constitution there is a contradiction: a reference to ‘secularism’ while also desiring “the preservation of ancient religious culture, including religious and cultural freedom” – alluding to Nepal as a predominantly Hindu state.

Hira Viskwakarma, Chairperson, Dalit Studies and Development Center, 2013 The Dalits, make up 13% of the Nepali population of approximately 28 million. 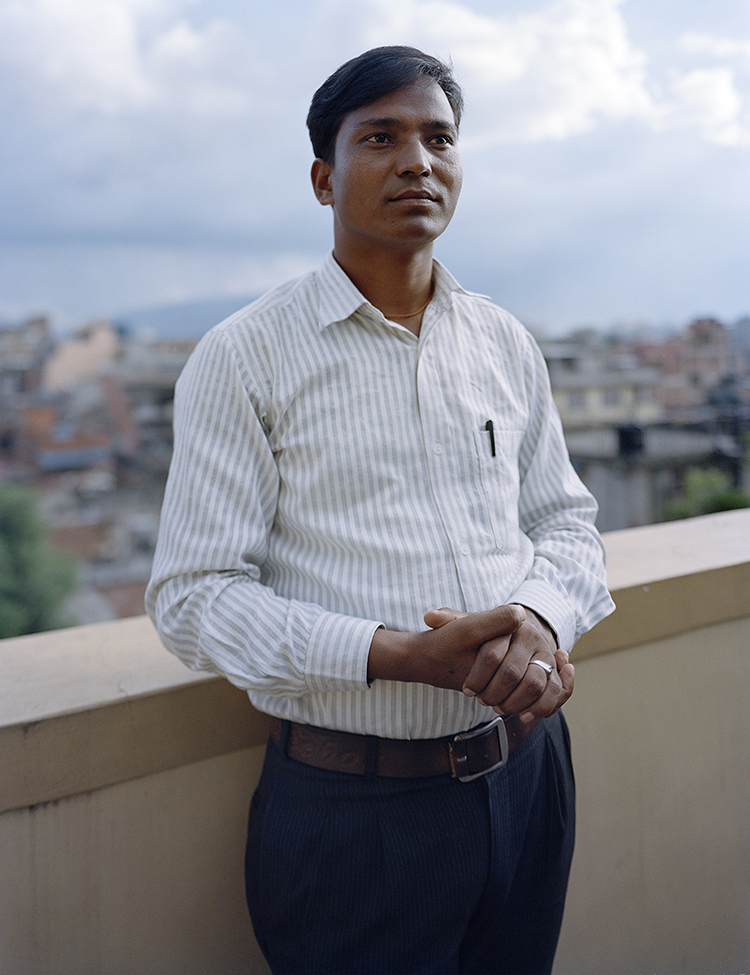 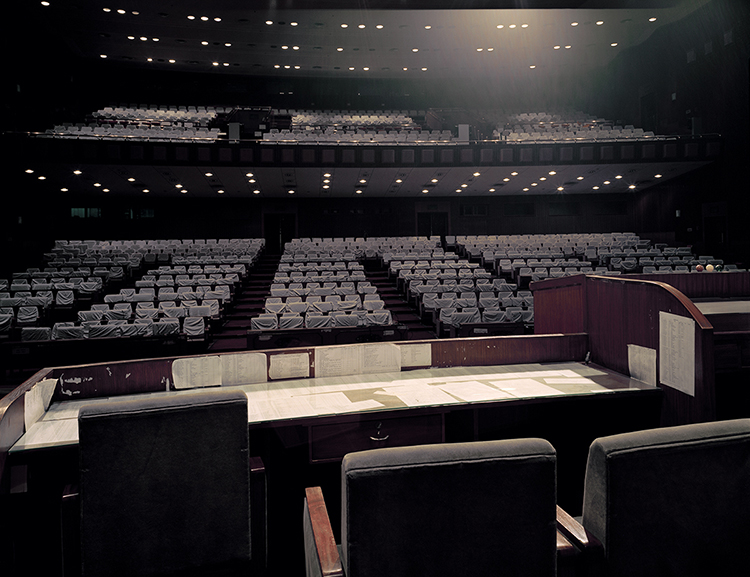 International Convention Center, where the Constituent Assembly met for four years and got dissolved in May 2012 after it failed its mandate to write Nepal’s constitution, 2012. This image was made after the first Constituent Assembly (CA) was dissolved in May 2012. In the first CA, the Maoists, who waged the ‘People’s War’ for 10 years and joined mainstream politics, formed the largest party. A second CA was elected in 2013. This time, the Maoists came third. The second CA promulgated Nepal’s Constitution in 2015 amidst objections by Madhesis (minorities from the southern plains), indigenous nationalities, women, and Dalits. There has been unrest in the southern plains that has continued for over 115 days, demanding amendments to the constitution.