My influences in contemporary photography seems to have receded in time as I feel closer to the photographers of the 1860s than to my own generation. With simple means, Thomas Annan (1829- 1887) photographed the narrow alleyways in Glasgow and showed how the working class majority lived. His photography stands out because of its rarity.…
…All of these photographs are taken with a Ruh Khitch street camera, made in Pakistan, which houses a self-contained darkroom so that I can develop the negatives immediately after exposure. This cuts out the need for an exposure meter and allows me to check if the subject has moved during the three-second exposure. The camera has no shutter and the lens is from an old enlarger. I can fix the camera with a hammer and pair of pliers. The camera is heavy and cannot be moved quickly, and if I do, I spill the chemicals from the trays inside it.

I feel that the point of a photograph is not only about how it is taken but what it says. The camera does have a strong influence on what the photograph can contain. Digital cameras are highly complex, technologically exact and expensive, but none of their qualities match the way I work nor the subjects I wish to present. The Ruh  Khitch camera allows me to interact with people, and for them to be involved in the process of being photographed. The image also contains evidence of the process clearly on its surface as a fine patina of dust marks and scratches. Each negative is therefore a unique piece. But my work is not perfect, and it is not meant to be. I embrace the distortions caused as a result of the harsh and difficult conditions prevalent in the surroundings. I’ve spent 10 of the last 15 years in Pakistan researching street photography and the last 5 years practicing the medium. Ruhkhitch is Punjabi for ‘spirit pulling’, which refers to the photographer putting his hand in the camera and pulling out the photograph, like a magician. 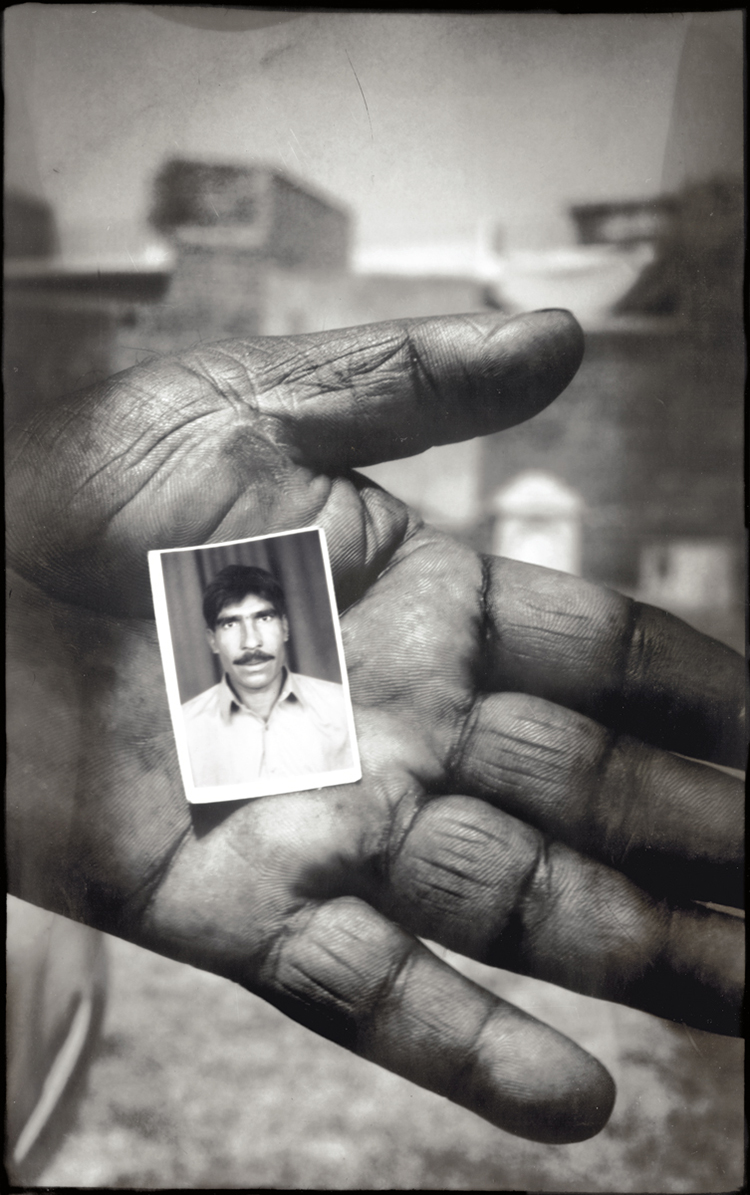 In remembrance of Ashraf Masih. Pervaiz Masih holds the only remaining photograph of his brother, Ashraf Masih, at his grave side. He died while cleaning a sewer pipe in Bachwa Colony, Badami Bagh, Lahore, during the rains in January 2008. The probable cause of death was inhaling poisonous gas though there was no inquest and no compensation was paid to his family. Christian Cemetery near Taxali Gate, Lahore. April, 2008

Erfan, aged 18 yrs, stands in a pool of waste water and sewage which collects in the dry river bed providing the only available water for buffalos to bathe in. There used to be 42 species of fish in the Ravi. There are now none. Khuram Colony, Shahdara Town, Lahore. April 2008 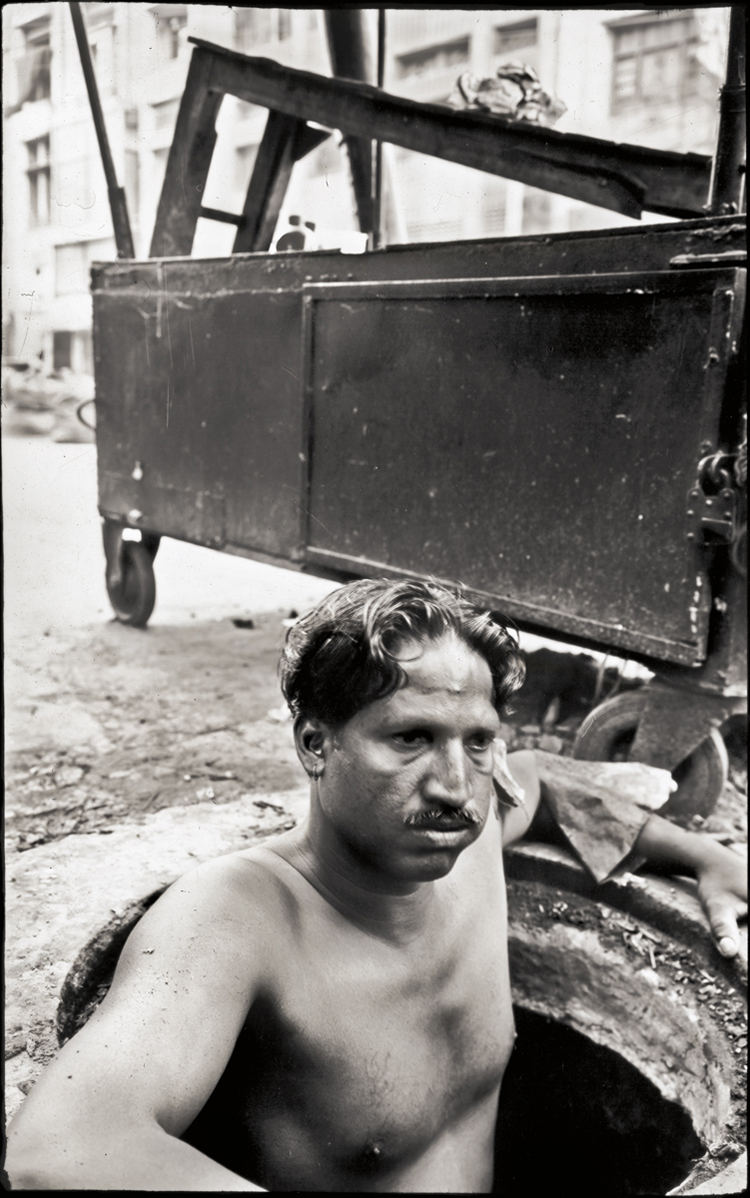 Javaid Masih, age 35 yrs, is entering the deep sewer at Shah’Alami Bazaar. His father did this job before him. To save his clothes he puts on jogging pants. There is no safety equipment. The majority of workers who clear blockages in the sewage system are Christian. Shah’Alami Bazaar, Lahore. April, 2008 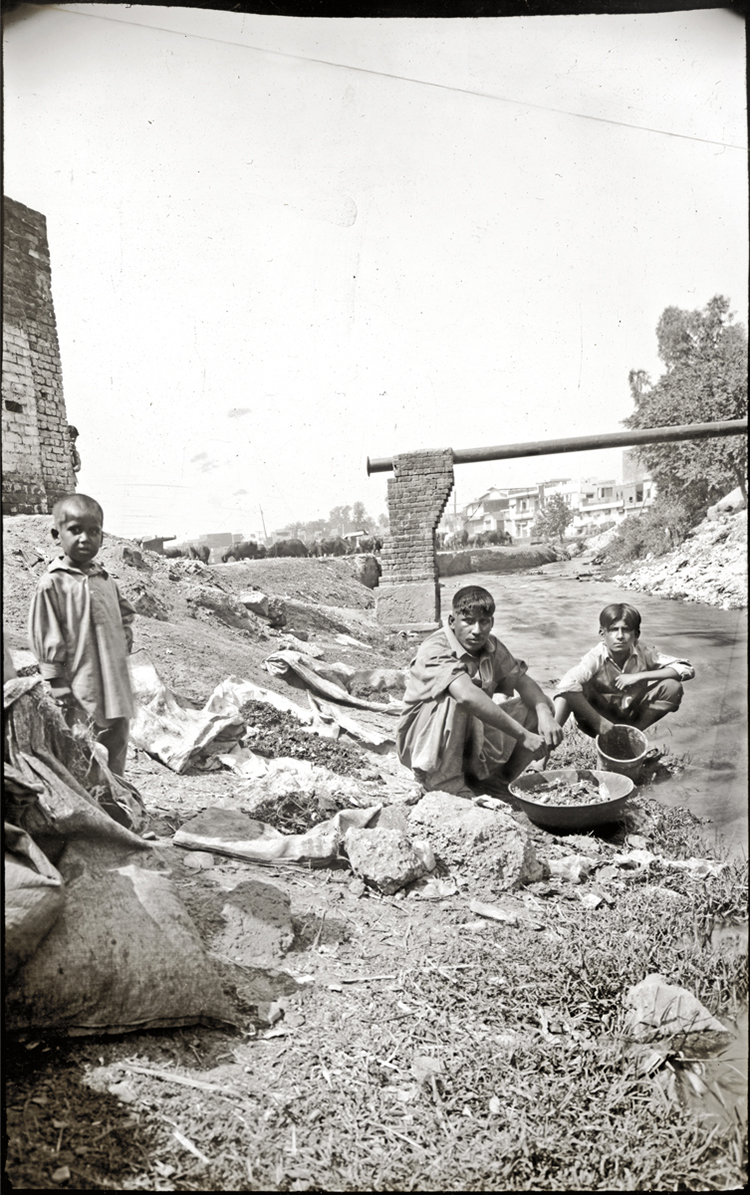 For 10 years, Mohammed Jawad with his son, Mohammed Nadim, collects sacks of sludge from the sewer of the Misri Shah metal market in Badami Bagh. He then brings them to the Shahdara Town waste water outflow where he pans the sludge to recycle the metal. Shahdara Town, Lahore. May, 2008 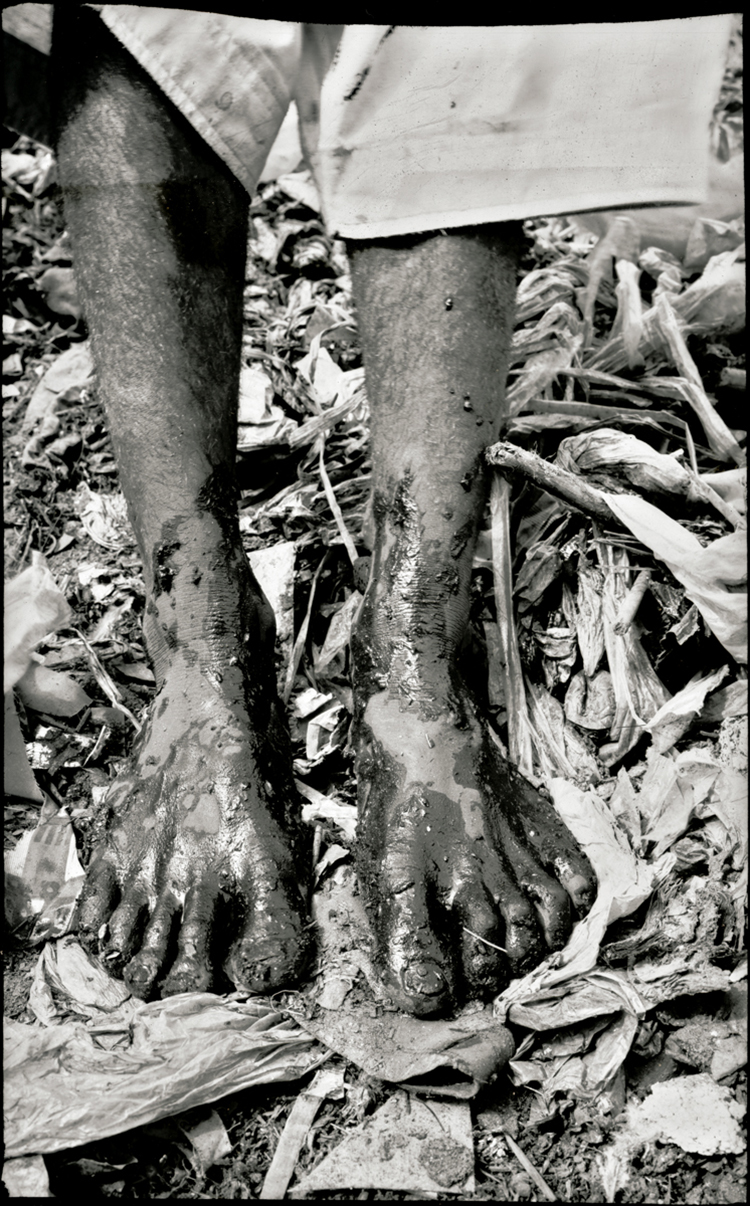 Facing page: Valiat, age 15yrs, has been herding buffaloes for 5 months. He earns the equivalent of 33 Euros per month. He removes his shoes as they get stuck in the black mud surrounding the pool of waste water when he has to wade in to control the buffaloes. Khokhar Pind, Bund Rd. Lahore. May, 2008

Water in the Punjab

The riches of the Punjab have always been based on two factors – its people and the water which runs off from the mountains to the north. Controlling the water supply is a national imperative and still defines the economics of the countryside. Old agreements over water rights control what crops can be grown, where and when. Urbanisation has concentrated people into densely packed cities which rely on groundwater pumped from tube wells. First there were wells sunk in each locality and workers, ‘Mashki’, were employed to carry the water to homes. The few that remain today, provide an alternative when the water supply breaks down. There are still public water taps and ‘hodis’ for horses to drink from and much of the municipal plumbing still relies on pre-partition water architecture. Historically, almost 5,000 years ago, Mohenjodaro (located in present day Pakistan), had a better provision of drinking water than present day Lahore.

These photographs are therefore evidential in nature. They show how individuals and whole communities are exposed to polluted water. Though we may look away we should never deny that these are the lives of important people, blighted by circumstance and often crippled by ill health due to the environment they are forced to live in. 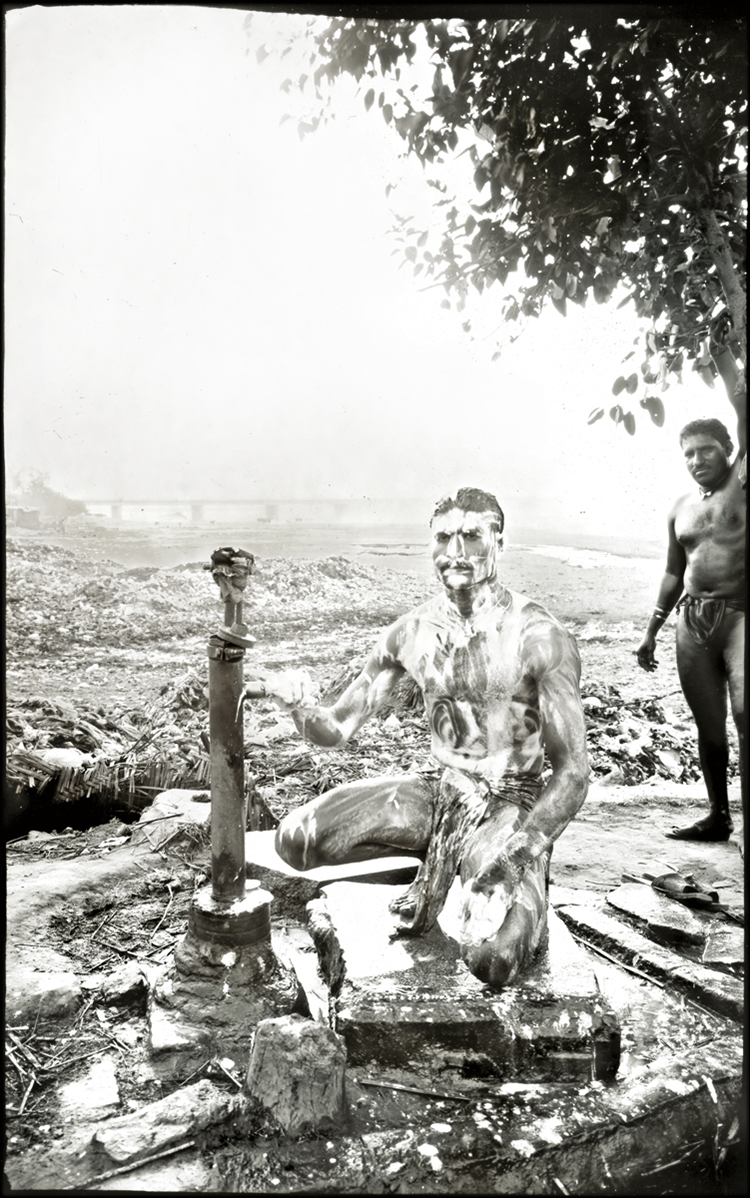 Rizwan Sadir, a wrestler and factory worker, showers from a hand pump next to the Ravi. Hand pumps are not drilled deep enough to avoid the polluted water. Khuram Colony, Shahdara Town, Lahore. April, 2008 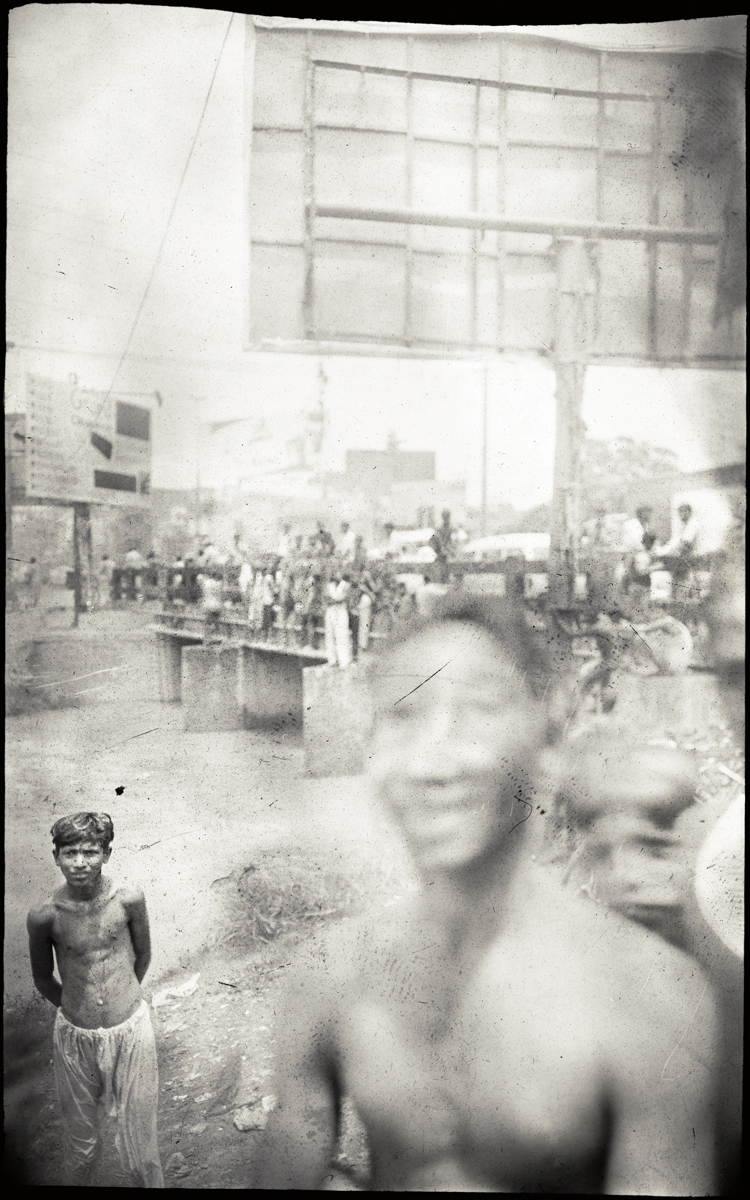 Swimming is a popular sport in a city where the temperature regularly goes over 35 degrees. Hundreds of boys use the canal as a free outdoor pool. Sewage flows directly into the canal upstream from here. There are no checks on the quality of the water and no one knows the health risks these children are exposing themselves to. Moghalpura, Lahore. May, 2008

It is easy to be hypnotised by the precariousness of Malcolm Hutcheson’s photographic apparatus (a DIY portable studio where the camera has no shutter and uses a lens from an enlarger) and the nostalgic pleasure of its effect. This suite of photographs also invites an empathetic reaction to the subjects living with the mixture of waste, pollution, poverty, and sludge, which constitute Hutcheson’s ‘short history of water in the Punjab’. Hutcheson’s self-imposed technical constraints, and the mode of citizenship that he practices through his choice of subjects and his means of address, are compelling. But I would like to draw attention to two interconnected features that exert a quieter influence in shaping his work: time and play.
In writing previously about Hutcheson’s work I have been struck by the relationship his photographs have with time.  The long exposures of several seconds required by his shutterless camera, turn each of his photographic subjects into participants – collaborators even.

The often-grim reality of his subject matter does not overwhelm a palpable sense of play in these photographs. I am not referring to ideas of play as recreation, but instead as being active or operative; about a state of engagement. It is about things being in play. The scene of well-muscled wrestlers washing themselves in April 2008: Khurram Colony, Shahdara Town, Lahore, brings to mind how at the beginning of a bout they would have circled each other, and locked eyes in a prolonged moment of stillness before they locked arms. It is that moment of engagement – that ‘before’ – I am drawn to.

I am captivated by his photographs of inanimate objects, which cannot look back in the same way as the people he captures, but share this engaged stillness. In April 2008: Christian Cemetery near Taxali Gate, Lahore, the object is itself a small passport-sized photograph held in an open palm – flexed preternaturally straight. The tension in the hand is echoed in the eyes of the man in the small photo. His intense stare anticipates the requirements of Hutcheson’s long exposures.

In May 2008: Shahdara Town, Lahore, metal containers of ice are being winched out of a pool. The metal chain is pulled disconcertingly taut – hinting at burdens greater than the weight of slabs of frozen water. These photographs (and their accompanying captions and text) offer us no obvious insights into the informal economies that drive the lives of the vulnerable majority in Pakistan. We are left wondering. Questioning. But we can imaginably recognise that we have witnessed a situation where things are in play. 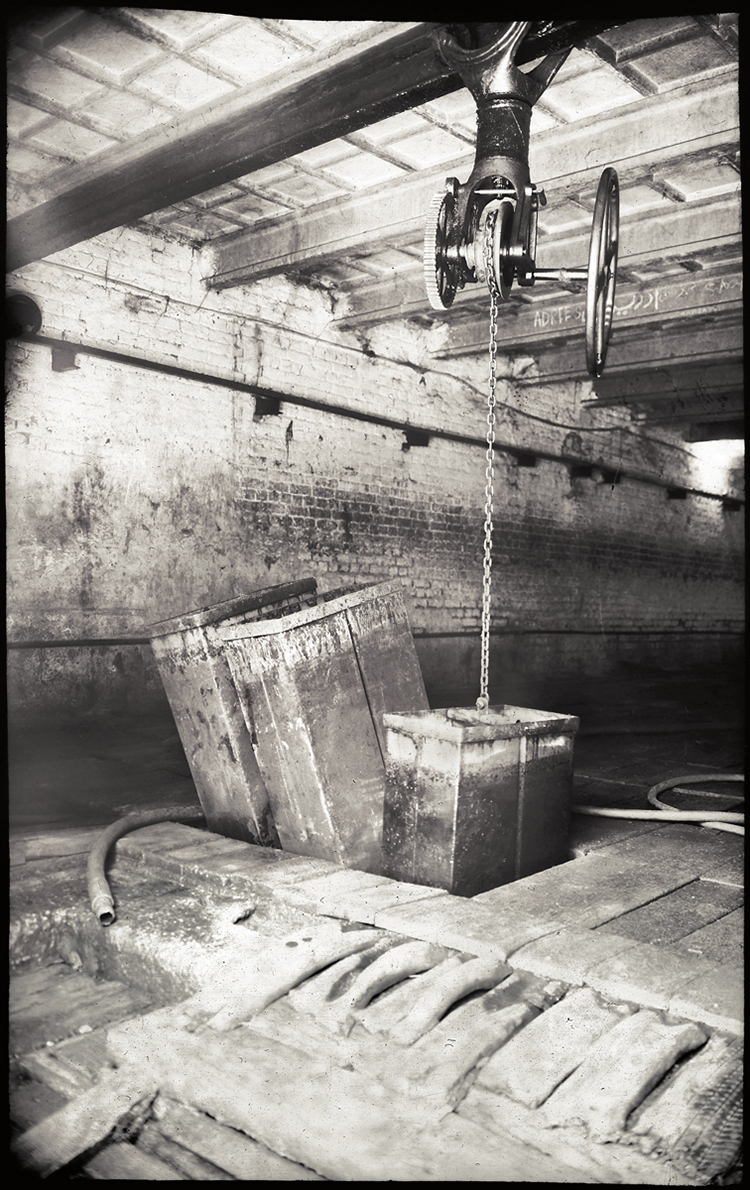